As we have sought to show in Parts I and II of this series, the claims that President Trump made in his joint-session address to Congress and in his revised executive order about the percentage of terrorism-related crimes committed by foreigners in the United States contain a number of distortions. They are also predicated on an important sleight of hand we explore in this post: The denominator is wrong.

As we noted in Part I, focusing on international terrorism cases alone rather clouds matters. There are a number of reasons to care about domestic terrorism convictions too and push back on the Trump administration’s rebranding of “Violent Extremism” as “Radical Islamic Extremism.” The most important is that domestic attacks—cases in which there appears to be no foreign nexus—have accounted for the majority of terrorism offenses in the U.S. every year since 1996, with the exception of 2002, a point we’ll explore in more detail below.

Second, as then-Assistant Attorney General John Carlin remarked in October 2015, domestic terrorists pose a significant threat to the United States: “We recognize that according to at least one study, more people died in this country in attacks by domestic extremists than attacks associated with international terrorist groups over the last, say, five to six years.” Carlin also said that domestic terrorists often perpetuate particularly violent attacks—for example, Wade Michael Page’s 2012 attack on the Wisconsin Sikh temple that killed six people. Compare this to our earlier finding that only one of the 43 defendants from the six countries affected by the executive order was convicted for plotting a violent attack on U.S. soil.

Domestic terrorists can also provide inspiration for international terrorism subjects. For example, Noelle Velentzas and Asia Siddiqui, two women who were charged in 2015 with conspiring to build a bomb to conduct an attack in the U.S. on behalf of ISIL and al-Qaeda, conducted research into the type of bomb used in the 1995 Oklahoma City bombing. Other international terrorism subjects have also reacted to domestic terrorism when planning attacks; Robert Lorenzo Hester Jr., for example, who was charged in Missouri earlier this year with material support, referenced white supremacists when planning: "Brothers in AmurdiKKKa we need to get something going here all those rednecks have their little militias why shouldn't we do the same.”

There’s one other important reason to include these crimes: If you’re counting the percentage of terrorism and terrorism-related convictions in the United States perpetrated by people who were born abroad, it’s quite dishonest to leave them out.

We reviewed the number of domestic terrorism convictions in the Transactional Records Access Clearinghouse (TRAC), a research center at Syracuse University. Using the FOIA process, TRAC provides data on range of federal agencies, with the goal of providing the public with comprehensive data on government spending, staffing and enforcement. Since 1996, according to TRAC data, 1,306 individuals have been convicted of domestic terrorism offenses in the United States—more than twice the number of international terrorism convictions during that same period. TRAC reports that number as 654, a figure that generally aligns with Justice Department records but that clearly includes a lot of the cases that we have excluded for reasons discussed earlier, so the discrepancy is likely even greater than that. After Sept. 11, 2001, TRAC indicated there were 629 convictions, while the Justice Department records counted 627 convictions. (Because TRAC does not name individual defendants, we haven’t been able to identify the two additional defendants.) The trend is also consistent within years; each year, with the exception of 2002, domestic terrorism convictions have surpassed international terrorism convictions.

Additionally, TRAC’s 1,306 domestic terrorism convictions is also probably a low estimate of the actual number of domestic terrorism convictions in the United States. Violent acts that may otherwise be considered “terrorism” are often labeled as “hate crimes,” as was the case with Dylann Roof. Other crimes that could easily fall under the domestic-terrorism umbrella are charged at the state level, making them even more difficult to track.

Furthermore, the overwhelming majority of these subjects are natural-born U.S. citizens. Of the 92 domestic terrorists convicted between 2014 and 2016, for example, only six were foreign-born. And those subjects came from Burundi, Canada, Morocco, Kazakhstan, Lebanon and Nigeria—none of which are countries targeted by the executive order. The status of 15 convictions could not be definitely established, but it’s fair to say that between 77 and 93 percent of the individuals convicted of domestic terrorism offenses during that three-year span were born citizens of the United States.

So what would the numbers look like if we excluded extradited subjects while including all of these domestic terrorists—the approach that seems to us the unbiased way to express the real rate at which foreign-born, as opposed to domestic-born, people are committing terrorist or terrorism-related crimes? 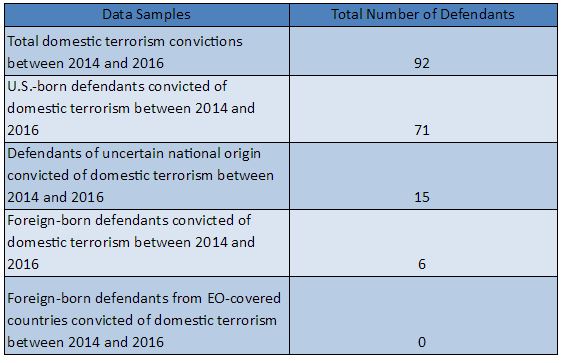 Conclusion: What Do the Data Tell Us and Not Tell Us?

These data indicate pretty strongly that citizenship and country of origin are just not a reliable indicator of terrorist activity. Simply put, those individuals convicted of terrorism, and terrorism-related, offenses came from 67 different countries, all over the world.

We’re not the first ones to make this point; the government, even under President Trump, has come to similar conclusions. In February, shortly after the Trump administration asked the Department of Homeland Security (DHS) for help in justifying the immigration ban, a leaked report from the agency actually undermined the administration’s goals:

DHS I&A assesses that country of citizenship is unlikely to be a reliable indicator of potential terrorist activity. Since the beginning of the Syrian conflict in March 2011, the foreign-born primarily US-based individuals who were inspired by a foreign terrorist organization to participate in terrorism-related activity were citizens of 26 different countries, with no one country representing more than 13.5 percent of the foreign-born population.

Reaching back another decade into the data, that assessment still rings true.

The 323 foreign-born individuals on the list not only come from a total of 67 different countries but also: No single country represents more than 11.5 percent of the foreign-born total. While every country affected by the executive order is represented on that list, so are South Korea, Greece, Sweden and Chile—not exactly countries that generally come to mind as exporting terrorists. With the exception of New Zealand, each of the Five Eyes, the United States’ closest allies, are also on the list, and not inconspicuously so. Britain and Canada each account for seven terrorism convictions—more than any of the countries covered by the order with the exceptions of Somalia and Yemen.

Even if using citizenship as an indicator of a terrorist threat were analytically sound, analysis of the historical data leads to a different result than that reflected in the executive order. The six listed countries are not among those with the greatest representation on the list of terrorism-related convictions from 2001 to 2015. Only one—Somalia—is even in the top five, and it ranks fifth. The top countries in order of representation are the United States (132), Colombia (39), Pakistan (37), Lebanon (31) and Somalia (22), followed by the Palestinian territories (20) and Yemen (18).

Perhaps most important, to borrow and flip the argumentation of the Trump administration, the majority of the 43 persons in this series above are naturalized U.S. citizens. Only three (to our knowledge) entered the U.S. as refugees, and 10 are citizens of the state of their births. We’re not exactly sure what to make of this data, but we do think that it contradicts the notion that people are coming here and then committing terrorist acts. Actually, they’re coming here, spending many years here living peaceably and then, in very small numbers, committing terrorism-related crimes. That points to a possible breakdown at a different point in the process, and not necessarily an error in the decision to allow these people into the country. The text of the revised executive order itself betrays this very likelihood when it cites as an example of the danger of refugees the following case:

And in October 2014, a native of Somalia who had been brought to the United States as a child refugee and later became a naturalized United States citizen was sentenced to 30 years in prison for attempting to use a weapon of mass destruction as part of a plot to detonate a bomb at a crowded Christmas-tree-lighting ceremony in Portland, Oregon.

It’s not at all clear what heightened scrutiny during the screening process would accomplish in the case of a child. We have no information that while in Somalia, this child thought of engaging in violent jihad. So if this order really is about ensuring adequate screening, as it says it is (“to ensure that adequate standards are established”), and not motivated by animus or a desire to ban people of certain religions or nationalities, as it indicates it is not, then this example should not be salient. The real story here is that after growing up in the U.S., a young Somali-American man decided to pursue a violent plot. At the very least, we suggest that the problem of foreign-born persons who commit offenses related to terrorism is much more complex than a failure of screening those persons out at the time of entry.

Lisa Daniels is a graduate of Harvard Law School. Prior to law school, she was an investigative analyst at the Manhattan District Attorney's Office in the Major Economic Crimes Bureau. She graduated with a B.A. from the University of Virginia in 2011.
More Articles
Published by the Lawfare Institute in Cooperation With