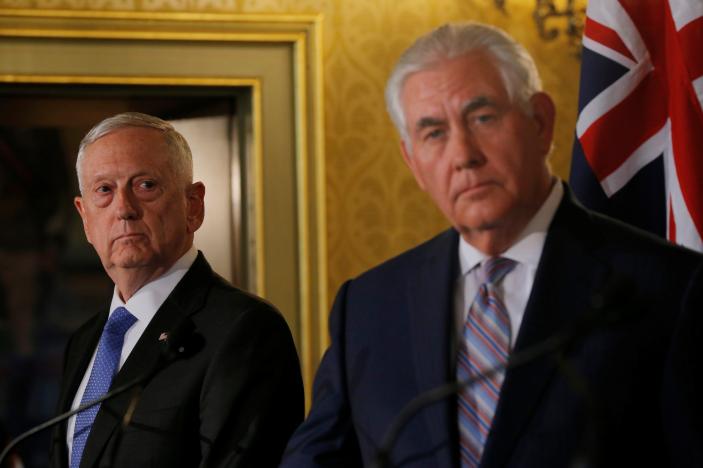 U.S. Secretary of Defense James Mattis with Secretary of State Rex Tillerson at a press conference at the Australian-U.S. Ministerial consultations (Photo: Reuters)

The Trump administration this week dispatched Secretary of Defense James Mattis and Secretary of State Rex Tillerson to send an unequivocal message that China cannot use its military or economic might to coerce other South China Sea claimants.

On Monday, Tillerson and Mattis joined Australian Foreign Minister Julie Bishop and Defense Minister Maris Payne in Sydney for the Australian-U.S. Ministerial consultations (AUSMIN), an annual meeting between high-ranking diplomats and defense officials. In his prepared remarks, Secretary Tillerson highlighted U.S. and Australian commitment to freedom of navigation and overflight, and professed that the two countries would work together to defend “the rules-based order which the Asia Pacific region depends upon.” Emphasizing both countries’ opposition to China’s construction and militarization of features in in the South China Sea, Tillerson declared that China cannot be allowed “to use its economic power to buy its way out of [its] problems.”

Tillerson’s tough stance on China mirrored the tone set by Secretary Mattis, who over the weekend attended the 16th Shangri-La Dialogue, an annual Asian security summit held in Singapore. In his address to defense ministers, generals and other delegates from dozens of countries, Mattis praised China's “renewed commitment to work with the international community toward denuclearization” in North Korea. Yet he also emphasized the binding effect of the 2016 Permanent Court of Arbitration ruling on Chinese claims in the South China Sea, and condemned China’s construction and militarization of artificial islands, which he said displayed “contempt for other nations' interests” and “disregard for international law.” Mattis added: “We cannot and will not accept unilateral coercive changes to the status quo.”

Secretary Mattis’ Japanese and Australian counterparts reinforced his message. Japanese Defense Minister Tomomi Inada deplored China’s “unprovoked, unilateral attempts to alter the status quo based on assertions incompatible with existing international norms,” while Minister Payne affirmed Australia’s commitment to freedom of navigation and overflight in the South China Sea in her own speech at the Shangri-La summit. In fact, the three top defense officials held trilateral meetings at the Shangri-La summit, which allowed them to present a united front. After that meeting, the three sides released a joint statement urging “all South China Sea claimants…to halt land reclamation activities, demilitarize dispute features and refrain from provocative actions that could escalate tensions.”

In response to General Mattis, Lieutenant General He Lei, head of this year’s Chinese delegation to Shangri-La, struck a surprisingly conciliatory tone. According to Chinese state-run media outlet Xinhua, He argued that China abides by, supports and defends international and regional rules, as demonstrated by China’s participation in more than 400 multilateral agreements, over 23,000 bilateral agreement, and its role in establishing the United Nations. He went on to suggest that the United States was using freedom of navigation as a cover to conduct “close-in surveillance…in the adjacent waters and airspace of China’s islands.” Even as he pushed back on Mattis’ remarks, He noted that China greatly values the bilateral relationship with the United States. Meanwhile, the criticism of China at the Shangri-La summit drew a sharp rebuke from Beijing. Chinese Foreign Ministry spokesperson Hua Chunying, in response to a question about Mattis and Inada’s speeches, expressed the Chinese government’s strong dissatisfaction with the “irresponsible remarks.”

The Department of Defense released its annual report to Congress entitled “Military and Security Developments Involving the People’s Republic of China: 2017.” The report notes several key developments in Chinese naval and military policy in the South China Sea, such as China’s increased patrols through disputed waters. It states: “China has leveraged its growing power to assert its sovereignty claims over features in the East and South China Seas. China has used coercive tactics, such as the use of law enforcement vessels and its maritime militia, to enforce maritime claims and advance its interests in ways that are calculated to fall below the threshold of provoking conflict.” The report also notes that China has continued to challenge Japanese claims to the Senkaku/Diaoyu Islands with frequent patrols.

The report also takes note of China’s “continued construction at its military outposts in the Spratly Islands,” including construction on Fiery Cross, Subi, and Mischief Reefs. The report adds: “As of late 2016, China was constructing 24 fighter-sized hangars, fixed-weapons positions, barracks, administration buildings, and communication facilities at each of the three outposts. Once all these facilities are complete, China will have the capacity to house up to three regiments of fighters in the Spratly Islands… most analysts outside China believe that the Chinese Government is attempting to bolster its de facto control by improving its military and civilian infrastructure in the South China Sea.”

David Rank, the acting U.S. ambassador to China, resigned on Monday to protest President Trump’s decision to withdraw the United States from the Paris climate change accord. A State Department official described his decision as a “personal” one.

Outspoken Philippine Supreme Court Associate Justice Antonio Carpio continued to criticize the government’s handling of sovereignty issues in the South China Sea. On Monday, he said that the government should lodge a complaint with the Permanent Court of Arbitration in the Hague regarding China’s alleged harassment of Filipino fishermen at the disputed Panatag Shoal. Speaking at a forum with the Inquirer, Justice Carpio reiterated his position that President Duterte is mishandling the South China Sea by, among other things, ceding the Philippines’ sovereignty over key waters. President Duterte said that, in spite of the criticism, he still respects Justice Carpio.

Meanwhile, Philippine Foreign Affairs Secretary Alan Peter Cayetano said that President Duterte hopes to visit Japan before November, when the Philippines will host the annual East Asia Summit, which Japan will attend. Duterte cancelled a trip he had planned for this month due to continuing operations against Islamist militants on the island of Mindanao, in the southern Philippines.

On Monday, Philippine Foreign Affairs Undersecretary for Policy Enrique Manalo said that the ASEAN countries would likely finish developed a code of conduct for the South China Sea by November.

In a joint press briefing with Vietnamese Prime Minister Nguyen Xuan Phuc, Japanese Prime Minister Shinzo Abe announced that Japan would provide Vietnam with some $350 million in aid to improve its patrol boats and defense equipment.

Chinese Foreign Ministry spokesperson Hua Chunying said that Singapore’s Foreign Minister Vivian Balakrishnan had been invited by his Chinese counterpart, Wang Yi, to visit Beijing. Balakrishnan will do so on Sunday. The invitation may represent an attempt to mend ties; Singapore’s prime minister was not invited to attend a summit in Beijing last month to discuss the “Belt and Road” initiative.

Speaking at the Shangri-La summit, Australian Prime Minister Malcolm Turnbull criticized what he characterized as aggressive action by China in the South China Sea. “A coercive China would find its neighbors resenting demands they cede their autonomy and strategic space, and look to counterweight Beijing’s power by bolstering alliances and partnerships, between themselves and especially with the United States.”

Malaysian Minister of Defense Datuk Seri Hishammuddin said to reporters at the Shangri-La summit that Malaysia maintains its opposition to militarization of islands in the South China Sea. “We opposed the militarization of the artificial island. The Chinese had told us the island will not be militarized…That has always been Malaysia's position even from before. No difference.”

This week’s commentary focused on James Mattis’ speech at the Shangri-La Dialogue.

Prashanth Parameswaran highlighted the striking similarities between Mattis’ remarks and the last speech former Defense Secretary Ash Carter gave on the rebalance to Asia. Other reviews of the speech focused on the audience’s skeptical reaction, particularly to the notion that a rules-based order can benefit all nations. For example, in the Q&A session after the Mattis speech, Michael Fullilove, executive director of the Lowy Institute for International Policy, a Sydney-based think tank, asked “why should we not fret about the destruction of that [rules-based] order,” given President Trump’s stance on NATO and the U.S. withdrawal from the Trans-Pacific Partnership and the Paris climate change accord. As regional expert Euan Graham explained, it will take more than a single Freedom of Navigation Operation or a strong speech by Mattis to dispel concerns about “President Trump’s transactional approach to China.”

Several commentators this week took a step back to question some of the fundamental assumptions about U.S. strategic interests in the South China Sea. Donald K. Emmerson, director of Stanford University’s South East Asia Program, raises the question of whether the South China Sea should be considered a key interest or simply a bargaining chip for the United States. On a similar note, James Laurenceson, an economist and the deputy director of the Australia-China Relations Institute at the University of Technology Sydney, argues that the oft-cited figure that $5 trillion of trade passes through the South China Sea each year is inflated. Writing in the East Asia Forum, Laurenceson suggests that other countries, and in particular the United States, have not been more aggressive in conducting Freedom of Navigation Operations because they realize that Chinese control of the South China Sea would have limited economic impact on global trade. Finally, Professor Kyle Haynes of Purdue University contends that instead of opposing Chinese hegemony in the region, the U.S. should consider whether China would be a “benign hegemon.” Haynes predicts that China would adapt – but not completely abandon – the rules-based, liberal economic order that the U.S. established after World War II. He acknowledges, however, that the largest hurdle to a peaceful transfer of regional hegemony from the U.S. to China would be whether Taiwan’s territorial integrity could be guaranteed.