Trump and Xi Strike a Cordial Tone, but Produce No Substantive Agreements 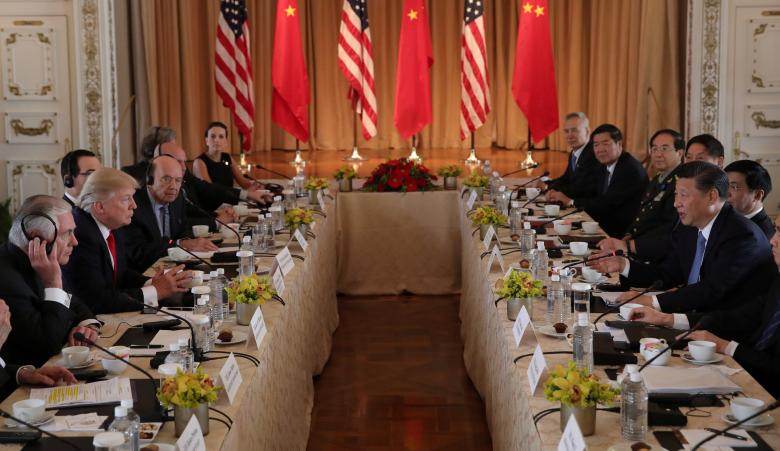 Last Friday, as Congress and the international community reacted to U.S. airstrikes in Syria, President Donald Trump completed his first meeting with Chinese President Xi Jinping. President Trump declared that his administration has made “tremendous progress” in the U.S.’s “outstanding” relationship with China. Secretary of State Rex Tillerson followed up on the President’s comments during a press briefing with Commerce Secretary Wilbur Ross and Treasury Secretary Steven Mnuchin to summarize the meetings with the Chinese delegation. According to Tillerson, President Trump emphasized to his counterpart the importance of “adherence to international norms in the East and South China Seas.” Tillerson also noted that U.S. and Chinese officials held “candid discussions on regional and maritime security.”

Chinese state-run news agency Xinhua characterized President Xi’s visit as a success and provided more details of the summit. According to Xinhua, Chinese officials reiterated “China’s positions on the South China Sea.” Moving forward, the two sides agreed to establish four parallel consultation mechanisms to replace the Obama-era Strategic and Economic Dialogue: the diplomatic and security dialogue, the comprehensive economic dialogue, the law enforcement and cybersecurity dialogue, and the social and people-to-people dialogue. Xinhua also reported that Trump accepted Xi’s invitation for a state visit to China later this year.

Among experts who study the region, there was wide disagreement on whether the summit was a success. Some interpreted the lack of a joint press conference or joint statement as strong indications of a confrontational atmosphere behind the scenes, while others heralded the meeting as successful simply because it avoided political gaffes. Most commentators saw enough cordiality between the two sides for cautious optimism. The sole point of consensus among these analysts was that the meeting between Trump and Xi produced few substantive outcomes. Trump and his team notably did not repeat any key phrases affirming a “new model of great power relations” between the U.S. and China.

Meanwhile, the Trump administration’s diplomatic overtures to the Asia Pacific will continue next week. The White House announced that Vice President Mike Pence will be in the region from April 15th to April 25th, visiting South Korea, Japan, Australia and the Philippines.

Manila seems to have backed down from President Rodrigo Duterte’s claim last week that Philippine soldiers would occupy islands and reefs in the Spratly Islands. Shortly after Duterte’s remarks, Chinese Foreign Ministry spokesperson Hua Chunying expressed a hope that the Philippines would “continue to properly manage maritime disputes with China.” She stated that Beijing is committed to defending “its territorial sovereignty and maritime rights and interests in the South China Sea, and safeguarding peace and stability there.”

Philippine Defense Minister Delfin Lorenzana then explained that the policy would only involve strengthening and upgrading facilities on the nine features in the South China Sea that the Philippines already occupies. Lorenzana said that the upgrades would include improvements to airstrips and ports. He added that the military would also focus on building living accommodations, such as sewage and electricity systems, for use by Philippine fishermen.

Over the next few days, Duterte sought to further allay Chinese concerns. “I’d like to address myself to the Chinese government,” he said, and promised that no “offensive weapons, not even one gun” would be placed on the reefs and islands. However, he claimed that, although the Philippines would not do so, “the United States will be stockpiling their weapons there.” On Wednesday, he added that, in response to a Chinese request, he would not visit the Spratly Islands to personally raise the Philippine flag, in spite of his previous plan to do so. When asked about Duterte’s decision not to raise the Philippine flag, Chinese Foreign Ministry spokesperson Lu Kang said that Beijing was “glad that the Philippines choose to work with China to properly manage differences.”

On Friday, Prime Minister Shinzo Abe announced a government plan to maintain control of 148 uninhabited islands that Japan claims as part of its territory. “As a maritime country, we must take long-term, systematic measures to protect, maintain and expand peace, security and our maritime interests,” Abe said. “The situation surrounding our seas is increasing in severity.” The government will acquire land on the islands for port facilities and administrative buildings. In addition, a further 273 uninhabited islands were registered as national property, clarifying Japan’s claims to them. A maritime task force will develop the plan, and will seek Cabinet approval next spring.

Japan’s navy plans to conduct joint drills with the U.S. Navy’s Carl Vinson carrier strike group, which is headed to waters off of the Korean Peninsula in response to recent North Korean missile tests. On Thursday, Tokyo released data indicating that Japan scrambled fighter jets against foreign aircraft a record number of times in the past year. Jets were scrambled 1,168 times, up from 873 in 2016. Of the 1,168 instances, 851 were in response to Chinese aircraft.

Responding to questions at a press conference, Chinese Foreign Ministry Spokesperson Hua Chunying stated that China has never used the term “artificial islands” in reference to the South China Sea. Rather, she said, China has engaged in construction projects on islands that “have been there since always” in order to “improve the working and living conditions of people stationed there.” In addition, China has deployed “necessary national defense facilities…for the aim of safeguarding China’s own territory.”

According to China’s State Oceanic Administration, four Chinese coast guard ships sailed into waters near the Diaoyu/Senkaku Islands, marking the ninth time this year that the Chinese coast guard has patrolled near the disputed islands. Meanwhile, the Asia Maritime Transparency Initiative reports that a Chinese J-11 fighter plane was visible on a satellite photograph taken of Woody Island in the Paracel island chain on March 29.

Responding to the planned Philippine construction in the Spratly Islands, Vietnam’s foreign ministry spokesperson, Le Thi Thu Hang, stated that Vietnamese sovereignty extended to the Spratly and Paracel Islands. She said that, without Vietnamese permission, any action by other countries on the islands would be illegal.

Singapore deployed six Boeing F-15s to Guam, along with about 100 personnel, to participate in fighter training exercises with the United States. U.S. Air Force Capt. Candice Dillette stated that fourteen American F-15Cs would take part in the exercise, which will be aimed at “enhancing our interoperability to ensure regional security and stability.”

On Monday, two reports providing exclusive insight into China’s South China Sea strategy were released. First, Dr. Andrew Erickson’s released Part 2 of a three-part series on the development of a maritime militia based in Hainan Province. The southernmost province of China, Hainan is tasked with administering all of Beijing’s maritime claims in the South China Sea. The second report came from Reuters, which became the first foreign media outlet to access Scarborough Shoal since China seized it in 2012. According to the exclusive report, the Chinese maritime authorities have eased their previous restrictions on Philippine fishing boats’ access to Scarborough Shoal. Reuters notes that the improved access represents a greater degree of compliance with last year’s arbitration ruling by the Permanent Court of Arbitration invalidating China’s claims of sovereignty over the South China Sea.

Meanwhile, Gregory Poling of the Asia Maritime Transparency Initiative contemplates whether the U.S. and its allies have already lost in the South China Sea. Although he concludes that it is not too late, he explains that on the current pace China will establish de factor control over the waters, airspace and resources of the South China Sea.

Finally, President Duterte’s claims that he would deploy Philippine forces to the Spratly Islands have been received with skepticism from analysts such as Bonnie Glasser of the Center for Strategic and International Studies and Lyle Morris of RAND Corporation. In fact, Richard Heydarian explains in the Nikkei Asian Review that the conflicting statements of Duterte and his generals represent an internal battle over how to handle maritime disputes with China.