Progress on a Code of Conduct, as China’s Tourism Plans Move Forward 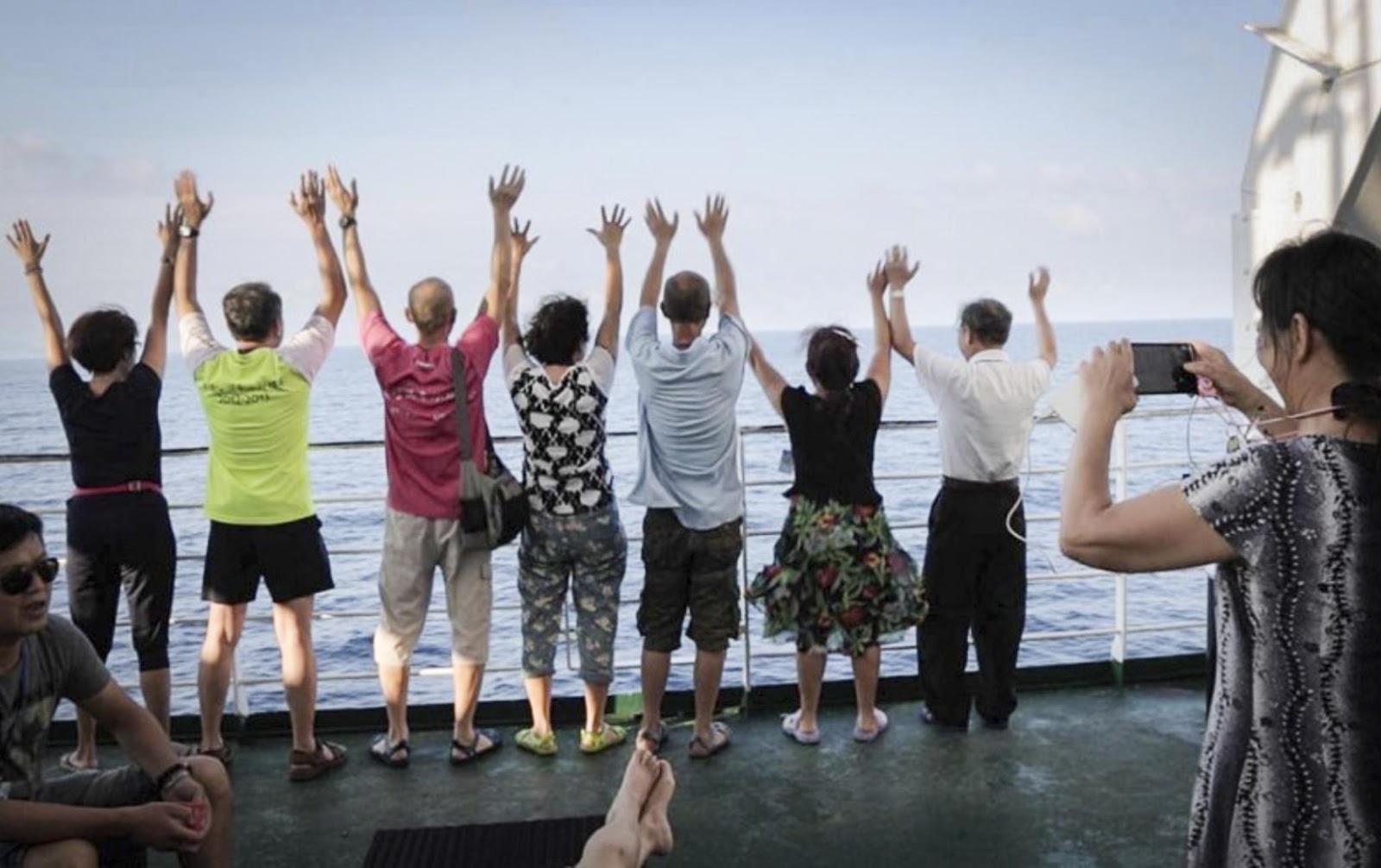 China claimed progress on a Code of Conduct for the South China Sea this week, and the country’s bold plans to turn the Paracels into a tourist haven took steps forward.

In Beijing, Hainan provincial delegates unveiled preliminary plans to begin tourism flights to the Paracels, and a Chinese cruise ship made its maiden journey from Sanya to the island group, carrying 308 Chinese passengers. A remarkable video produced by the South China Morning Post shows passengers, who paid between $500 and $3,000 and passed a “political screening test,” taking in a South China Sea documentary and participating in a Chinese-flag-raising ceremony. Also depicted in the video are the austere conditions of Chinese civilians who are paid to occupy the islands.

The ship’s voyage is a further step toward routinizing civilian access to the islands, where cruise operator Hainan Strait Shipping says tourists “can play beach volleyball, dive, fish and take wedding photos.” China intends to maintain a continued civilian presence on the islands in order to support their legal claims and administrative dominion over the disputed island region.

In a press conference during the Fifth Session of the 12th National People's Congress, Chinese Foreign Minister Wang Yi announced that a China-ASEAN joint working group successfully produced a draft Code of Conduct (COC) for the South China Sea (SCS). While the draft COC has not been made publicly available, senior officials with Chinese government-affiliated research institutes have said that it would call for a halt in the militarization of islands and require all countries to stop installing offensive weapons, but would grant leeway for countries to maintain defensive weapons.

Wang said that tensions in the SCS have significantly abated over recent months due to efforts by the working group members, and added that “if someone should try to make waves and stir trouble, they will have no support but meet the common opposition of the entire region.” He went on to praise Philippine President Rodrigo Duterte for “appropriately [handling] the South China Sea issue and actively [improving] relations with China.” Duterte, if not always others in his administration, has struck a conciliatory tone with the Chinese and downplayed the significance of maritime conflict.

Holding the chairmanship of ASEAN this year, the Philippines agreed to fast-track discussions and work towards a COC that garners the unanimous consent of all ASEAN parties. The first China-ASEAN “Declaration on the Conduct of Parties in the South China Sea” was signed in 2002.

Just days after President Donald Trump requested a sharp increase in defense spending, China announced that it would raise its military budget by “about 7 percent,” the smallest increase in nearly a decade. The reduced rate of spending growth reflects the country’s slowing economic performance. Even so, Chinese Premier Li Keqiang proposed an increase in forces dedicated to “offshore locations,” which include islands in the East and South China Seas.

Three Chinese warships returned to port this week after a 25-day voyage during which they performed drills and traversed the South China Sea, East China Sea, and the East Indian Ocean. During this year’s National People’s Congress, retired general Liu Xiaojiang advocated a shift in focus from land to naval forces, and Foreign Minister Wang Yi appeared to take a hard line against U.S. Navy activity in the South China Sea region, saying, “China will never allow the hard-won stability [in the South China Sea] to be disrupted again.”

The Department of Defense released its fiscal year 2016 Freedom of Navigation (FON) Report this week. During that period, the United States conducted FON operations challenging the maritime claims of 22 countries, including China, Indonesia, Japan, Malaysia, the Philippines, Taiwan, and Vietnam. Among the most commonly challenged practices was a requirement for prior notification of foreign military vessels transiting through a country's territorial seas.

Japan's Air Self-Defense Force scrambled fighters jets last Thursday after 13 Chinese military aircraft were spotted flying through the Miyako Strait between Japan's southern islands of Okinawa and Miyako. The Japanese Defense Ministry said the Chinese aircraft did not violate Japanese airspace. The aircraft, which included fighters, bombers and early warning aircraft, flew through the Strait in conjunction with a large Chinese naval drill in the East China Sea.

The Taiwanese navy displayed new plans for an “Amphibious Landing Helicopter Dock Ship” at an indigenous shipbuilding exhibition, the first such public presentation since the navy unexpectedly scrapped a previous plan last year. According to the listed specifications, the ship would be able to accommodate at least six large helicopters at the same time, would have a top speed of 30 knots, an actively electronically scanned array radar, and an advanced sonar system, and would be armed with an OTO Melara 76mm gun and an air defense missile system. A helicopter carrier could also potentially provide a platform for vertical take-off and landing warplanes that the Taiwanese military has considered purchasing, including Harriers, V-22 Ospreys, and the new F-35B Lighting II Joint Strike Fighter. The plan represents only the navy's vision and remains subject to government approval and funding capacity.

Separately, in remarks to the media on Thursday, Lorenzana expressed alarm over Chinese vessel activity in Benham Rise, within the Philippines exclusive economic zone and considered part of the country's continental shelf. Lorenzana said that he suspects the Chinese were conducting seabed survey missions in the area, and that he ordered the navy to drive away any Chinese vessels seen in the area in the future. He also alluded to a Chinese plan from last year to start reclamation activities in the Scarborough Shoal, which is within the Philippine EEZ but controlled by the Chinese coast guard. The United States intervened, Lorenzana said, and was able to dissuade the Chinese from crossing what would be a “red line” for both the Philippines and the United States.

A Vietnamese freighter evaded an attack by pirates near the Turtle Islands off the coast of Sabah, reaching Malaysian territorial waters where the vessel was met by forces from Malaysia's Eastern Sabah Security Command and escorted to port. The Turtle Islands are located in the Philippine province of Tawi Tawi, approximately 130 nautical miles west of where a deadly attack on a Vietnamese vessel occurred two weeks ago.

Australian Prime Minister Malcolm Turnbull and Foreign Minister Julie Bishop, in Jakarta for the Indian Ocean Rim Association summit, clarified that there is no plan to conduct joint military patrols with Indonesia in the South China Sea. Referencing comments Indonesian President Joko Widodo made last month after the two countries agreed to restore military cooperation, Bishop said Widodo was not “talking about joint exercises as such, he was talking about cooperation in maintaining freedom of overflight and freedom of navigation through the South China Sea."

The Navy’s FY 2016 FONOP report generated a wide range of responses this week. Ankit Panda commended the Navy’s even-handed approach to challenging territorial claims in the South China Sea, but Joseph Bosco’s take on the report was darker, parsing its language to draw the conclusion that the U.S.’s operations last year actually had the effect of conceding territory to China. In Foreign Policy, Ely Ratner of the Council on Foreign Relations proposed concrete measures the Trump Administration could take to turn it’s tough but capricious rhetoric on China into action, saying, “There’s a right way to get off on the wrong foot with China.”

Forbes contributor Ralph Jennings shed light on how economic dependence on China drives Brunei’s non-confrontational approach to South China Sea disputes. In the Naval War College Review, Lyle Morris of the RAND Corporation discussed the evolving role of coast guards in both contributing to and managing SCS disputes, concluding that to reduce tension and build trust, the the countries of the region should create a multilateral coast guard forum with both information-sharing and operational components. Finally, Patrick Cronin and Seongwon Lee make the case for South Korea to take on a larger role in Southeast Asian security affairs, highlighting its critical interest in protecting the free flow of commerce through the region.