China suffered two major setbacks in the South China Sea this week. First, sparks flew between the PRC and Indonesia when the bungled seizure of a Chinese fishing vessel in Indonesian waters almost led to a direct conflict. Later in the week, the United States and the Philippines announce a new decade-long pact that will allow American troops to rotate between five PH bases, many close to PRC installations in the South China Sea. 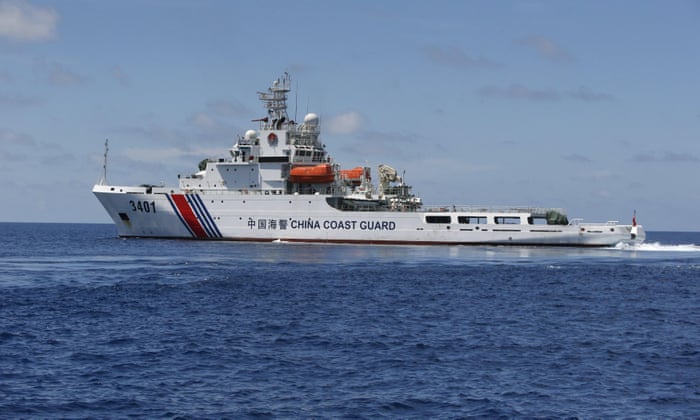 Jakarta found itself in the middle of the South China Sea disputes on Saturday after a patrol boat from the Indonesian Ministry of Fishery and Marine Affairs (KKP), KP Hiu 11, seized a Chinese fishing vessel, Kway Fey 10078, and arrested its eight crewmembers for illegally fishing in Indonesia's EEZ off the coast of Natuna Island. While the Hiu was escorting the Kway Fey back to base, a nearby Chinese Coast Guard vessel rammed the captured fishing boat near the limits of Indonesia’s territorial waters, forcing the KKP officers to abandon the Chinese vessel. A spokesperson for the Chinese Embassy in Jakarta issued a statement claiming that the fishermen were operating in “a traditional Chinese fishing ground” and “hoped that the Indonesian side could properly handle this issue.” On Monday PRC Foreign Ministry spokeswoman Hua Chunying further alleged that the fishing vessel “was attacked and harassed by an armed Indonesian ship” and that the Coast Guard was sent to “ensure their personal safety,” but did not enter Indonesian territorial waters.

The incident is perhaps most significant in how it differs from recent history. In 2013, the last time that China and Indonesia clashed over claims of illegal fishing by Chinese citizens around Natuna Island, Jakarta remained silent. This time around, however, Indonesian officials explicitly rebuffed pleas by a top Chinese diplomat to withhold information from the media hours after the confrontation. Given Indonesia's policy of non-alignment, a flurry of commentary has emerged assessing how this incident might impact relations with China. Aaron Connelly at AMTI considers whether Indonesia will abandon its strategy of “rowing between two reefs,” and Jeremy Bender reflects on the possibility that the confrontation will presage Indonesia’s realignment with its harder-edged neighbors. Prashanth Parameswaran, however, argues that Jakarta’s policy shift resembles a recalibration more than a radically new approach.

U.S. Military Back in the Philippines Map showing five PH bases where U.S. troops will be stationed and their proximity to PRC-held features (Wash. Post)

In a joint statement following the annual U.S.-PH Strategic Dialogue, Washington and Manila announced a deal allowing for a rotating American military presence at five Philippine bases. The agreement will initially be valid for ten years but does not allow for permanent U.S. bases, as existed before 1991. U.S. Ambassador to the Philippines Philip Goldberg confirmed that supplies and personnel would move to the bases “very soon.” A number of the designated bases are close to PRC-controlled features: Antonio Bautista Air Base is only 186 miles from Mischief Reef, and Basa Air Base lies 205 miles from Scarborough Shoal. However, State Department spokesman John Kirby asserted that there is “nothing offensive or provocative” about these new troop deployments.

Philippine officials hailed the agreement as a major success. Department of Foreign Affairs spokesman Charles Jose said the pact would “ensur[e] both countries’ mutual defense and security.” Senator Gregorio Honasan, a candidate for Vice-President, went further, expressing his hope that “China will blink so that when they blink, it will pave the way for negotiations.” Mr. Honasan also predicted that more bases would eventually be made available to U.S. troops.

Beijing was predictably less enthused about the pact. Responding to a question about the base agreement, PRC Foreign Ministry spokeswoman Hua Chunying retorted, “Maybe they can explain whether their increased military deployment in the South China Sea and nearby areas is an action or militarization or not?” A Xinhua commentary also warned that “[m]uddying waters in the South China Sea and making the Asia-Pacific a second Middle East will do no good to the United States.”

The Mainland was not alone in clashing with Jakarta this week, as Indonesian military vessels reportedly fired upon two Taiwanese fishing boats in the Strait of Malacca. The Indonesian Navy denied having any role in the incident and suggested instead that the civilian authorities may have been involved. Susi Pudjastuti, Minister of Maritime Affairs and Fisheries, later confirmed her ministry’s involvement, alleging that the Taiwanese vessels were poaching within Indonesian waters and and that the trawlers were fired upon only after repeated warning. Taiwanese Fisheries Agency Director-General Tsay Tzu-yaw disputed these claims.

Taiwanese Deputy Foreign Minister Bruce Linghu announced a media tour of Taiping (Itu Aba), which took place on Wednesday, as part of a larger diplomatic blitz in advance of the upcoming merits decision in the Philippines v. PRC maritime arbitration case. The trip was specifically designed to refute Manila’s contention that the island is merely a rock and therefore not entitled to an exclusive economic zone or continental-shelf rights. Taiwanese authorities highlighted the fact that the maritime feature has self-sustaining freshwater reserves and can independently support both human habitation and economic life—references to the criteria for an island established under UNCLOS. Join AMTI’s Gregory Poling for a virtual tour of the disputed feature.

IHS Jane’s reports that recently published imagery suggests that China has deployed and tested a land-based version of the 400 km YJ-62 anti-ship cruise missile to Woody Island. This follows a flurry of activity on Woody Island, including Beijing’s confirmation that civilian flights will arrive within the year and the repositioning of two HQ-9 surface-to-air missile batteries on the artificial island.

Chinese officials have reacted strongly against Japan’s plan to place the South China Sea on the agenda for the upcoming G-7 summit in Hiroshima. The Japan Times reports, for example, that PRC Assistant Foreign Minister Kong Xuanyou warned that how Japan addresses the issue with the G-7 will be a litmus test for whether bilateral ties can be improved. Mr. Kong also expressed doubt about whether Japan truly wants to improve Sino-Japanese relations. Tokyo rejected this criticism, arguing that the international community cannot accept Chinese construction and militarization in the South China Sea.

PRC President Xi Jinping has agreed to discuss the South China Sea with President Obama next week on the sidelines of the fourth Nuclear Security Summit. Mr. Obama had previously invited his Chinese counterpart to the summit, which will be held in Washington from March 31 to April 1.

Ministry of Foreign Affairs spokesman Le Hai Binh demanded compensation for fishing nets, food, and fuel that were destroyed when PRC officials boarded a Vietnamese fishing vessel two weeks ago. Mr. Binh asserted that Hanoi “will not accept inhuman behavior, the use of force or threat to use force against Vietnamese fishermen.” He also denounced Chinese construction and tourism in the Paracels as serious violations of Vietnam’s sovereignty.

Filipino boats carrying eleven fishermen were rammed by Chinese Coast Guard vessels while fishing near Scarborough Shoal. The fishermen reported that they used knives and harpoons to defend themselves after being ordered to leave the area. PRC Foreign Ministry spokeswoman Hua Chunying instead claimed that the fishermen “waved around machetes and flung fire bombs, carried out deliberate provocation, and attacked the Chinese law enforcers and official boats.” She further declared that these actions force China to “strengthen supervision” in waters around Scarborough Shoal. President Benigno Aquino III responded to the incident by establishing a “National Task Force for the West Philippine Sea” to coordinate policy across sixteen federal agencies and departments.

Sino-Japanese relations remained tense after diplomatic clashes last week. Citing North Korean missile tests and Chinese “invasion of our territory,” Japan’s military attaché to the United States, announced that Tokyo will expand its East China Sea surveillance network and build a new radar observation station south of the Senkaku/Diaoyu Islands. Although Colonel Masashi Yamamoto reiterated that there are no plans to station troops on the disputed islands, he stated that “in the near future we will have a 600-troop security force” on islands north of Okinawa in Japan’s southern island chain (Amami). Also this week, Japan’s governing and opposition parties jointly proposed a bill that would establish bases on seventy-one inhabited islands in the East China Sea.

Further stoking tensions, the Japanese Ministry of Education sanctioned new course materials that markedly increased coverage of disputed territories, including the Senkakus/Diaoyus. The new textbooks also incorporated Ministry-mandated changes that increased ambiguity over the scale of the Nanjing Massacre. Beijing lodged a formal protest in response. PRC Foreign Ministry spokeswoman Hua Chunying reiterated that Japan “can not change the fact that Diaoyu Dao belongs to China.” Regarding changes to the historic record, she added, “We strongly urge Japan to take a responsible attitude towards history.”

Australian media noted the increasing frequency with which Southeast Asian nations are looking to Canberra for deterrence against Chinese military buildup in the South China Sea. One example of this increasing collaboration took place late last week as the Singaporean Foreign, Defense, and Trade Ministers wrapped up a series of meetings in Australia. In a joint press conference, both foreign ministers reaffirmed the right of states to conduct freedom of navigation and overflight exercises in the South China Sea. Prime Minister Malcolm Turnbull later called China’s military deployments “counterproductive, regardless of the legal merits.”

The Australian Foreign Investment Review Board announced that it will heighten standards for leasing critical state infrastructure to foreign companies after Washington expressed unease concerning a Chinese company that was allowed to lease the Part of Darwin. The port is adjacent to a key Royal Australian Air Force base with a substantial U.S. Marine Corps presence.

In a widely publicized editorial at Korea IT Times, Choe Nom-Suk lays the blame for militarization in the East China Sea on Beijing, with a shadow stretching back to the early 20th Century. Mira Rapp-Hooper has an excellent article in the latest issue of Foreign Affairs that analyses the PRC’s short-term victory (and long-term problem) in the South China Sea.

The Brown Political Review’s Nelson Chou explores the new “Cold War in the South China Sea.” Brookings released a new paper by Jeffrey Bader that prescribes a framework for U.S. policy toward China. And five CNAS experts have collaborated on a report on “Networked Transparency,” which argues that a maritime domain awareness (MDA) network would alleviate the opaque nature of operations in the South China Sea and thereby lower the chance of conflict.

Over at The Diplomat, Tara Davenport dismisses the notion that China should denounce UNCLOS in the event it loses in the Philippines v. PRC maritime arbitration, in part responding to an op-ed from Stefan Talmon we covered in early March. Greg Austin explores what PRC President Xi Jinping and the Chinese government understand as “militarization” in the context of the South China Sea. And following up on the first segment of a two-part post, Jonathan Odom tests the Chinese “myth” about freedom of navigation based on the existing record of evidence, while Mark Valencia questions not only Commander Odom’s premises but also his data.