A week of military drills and deployments from Beijing 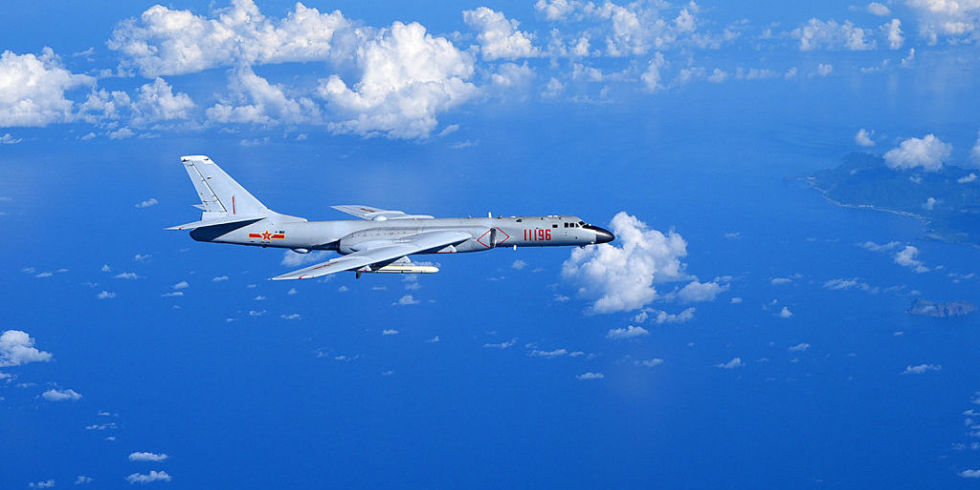 The Asia Maritime Transparency Initiative at CSIS released a report on Wednesday finding that Beijing appears to have emplaced large anti-aircraft guns and close-in weapon systems on each of its outposts in the Spratly Islands. These weapons could provide each artificial island with a last line of defense against incoming cruise missiles and support the larger security umbrella provided by surface-to-air missile platforms if and when they are deployed to the region. Read the full report for more details on what has been emplaced at each location.

This deployment seems to contradict statements from Chinese leadership that it has no intention to militarize features in the South China Sea. Chinese Foreign Ministry Spokesperson Geng Shuang told reporters he was “not aware of the specific situation mentioned by this think tank.” He went on, however, to explain that, “China’s deployment of necessary defense facilities on its own territory has nothing to do with the so-called militarization.” A Defense Ministry Spokesperson made a similar statement, rhetorically asking, “If a person shows off his muscles in your doorway, shouldn’t you at least prepare a slingshot?”

Philippine Defense Minister Delfin Lorenzana was more concerned, saying that, “if true, [this] is a big concern for us and the international community who use the South China Sea lanes for trade.” State Department Spokesperson John Kirby added that the US “consistently” calls on China “to refrain from further land reclamation and construction of new facilities and the militarization of disputed features.”

This was only the most recent move in a busy week for Beijing. Beijing also dispatched a strategic bomber to conduct an overflight of China’s nine-dash-line. Analysts suggest that the deployment may be a response to President-elect Donald Trump’s recent criticism of Beijing, and particularly his call with Taiwanese President Tai Ing-wen. Though many news outlets said the bomber is “nuclear capable,” our friends at Popular Mechanics remind us that the aircraft typically carries conventional weapons. US officials say that the last time Chinese planes flew this route was March 2015. The US has also flown B-52 and B-2 bombers over the South China Sea in recent years.

The US was not silent as these events occurred (more on Donald Trump’s statements over the past week below). Head of US Pacific Command Admiral Harry Harris was particularly vocal at a conference sponsored by the Lowy Institute (click here for the full transcript of his speech). In the speech Admiral Harris pledged that Washington would continue challenging Beijing’s “assertive, aggressive behavior in the South China Sea.” He went on to say that the US “will not allow the shared domains to be closed down unilaterally, no matter how many bases are built on artificial features in the South China Sea.” Harris reassured allies that “you can count on American now and into the future” because “it’s in our national interest to continue our engagement in this vital region as we support the rules-based international order.” To boot, Admiral Harris announced that the F-22 Raptor will be deployed out of northern Australia in 2017. Euan Graham, the Lowy Institute’s director of international security, called the announcement a “pretty high-end coercive signaling to China.”

Update: Reports on Friday indicate that a Chinese warship seized a US underwater drone deployed in the South China Sea. The US issued a formal diplomatic protest to this highly unusual event.

After needling China last week with a call to Taiwan, President-elect Trump again took to the airwaves to prod Beijing. This week he told the press that “I fully understand the ‘one China’ policy, but I don’t know why we have to be bound by a ‘one China’ policy unless we make a deal with China having to do with other things, including trade.” Trump made this comment, which would upend forty years of diplomatic practice and allow for recognizing Taiwanese independence, after significant blowback from his call with the Taiwanese President. Chinese officials took none too kindly to this statement. Chinese Foreign Ministry Spokesperson Geng Shuang said that, “Adherence to the one China principle serves as the political foundation for the development of China-US ties. If this foundation is troubled or weakened, then there is no possibility for the two countries to grow their relations in a sound and steady way and cooperate on key areas.”

Chinese media reacted more forcefully. An editorial in the Global Times described Trump as “ignorant as a child in terms of foreign policy” and claimed that there was no reason to “put peace above using force to take back Taiwan.” An editorial from Xinhua made much the same point, pointing out that “It is difficult to overstate how serious an affront to Beijing it would be if the incoming U.S. administration recklessly shook the foundation of bilateral ties.”

The Obama administration sought to distance official US policy from the President-elect’s comments. White House spokesperson Josh Earnest said that, “The United States does not view Taiwan and our relationship with Taiwan as a bargaining chip,” instead calling Taiwan a “close partner.” He further warned that changing the policy “could have a disruptive effect on our ability to work with China in those areas where our interests do align.” Later in the week Deputy Assistant Secretary of Defense Abraham Denmark made much the same point, also stating that China’s reunification policy “makes it incumbent on Taiwan to prepare and invest in capabilities to deter aggression and mount an effective defense if deterrence fails.”

Last week’s revelation that Vietnam is upgrading its only runway in the South China Sea continued to makes waves. Analysts suggested that the dredging might be intended to shore up Vietnam’s defenses on Ladd Reef. China was none too pleased with the news. Foreign Ministry Spokesperson Lu Kang told reporters that, “relevant countries [are urged] to respect China’s sovereignty and rights and interests, stop illegal ocupation and construction, and refrain from taking any action that may complicate the situation.”

At the same time, Beijing celebrated the seventieth anniversary of its capture of the Paracel Islands from Vietnamese forces. Navy Commander Wu Shengli said that “recovering” the islands “demonstrat[ed] that China was firmly safeguarding the post-war international order and affirm[ed] the nation as defending its rights and interests in the South China Sea.” He also claimed that Chinese construction on maritime features in the South China Sea is “lawful, justified and reasonable.” For Chinese readers, here is a full transcript of his speech. Hanoi, unsurprisingly, was less pleased. Foreign Ministry Spokesperson Le Hai Binh told reporters that Chinese occupation could not change the reality of Vietnam’s sovereignty over the islands. A day later, Vietnam also criticized a set of Chinese postage stamps featuring five lighthouses built in Vietnamese-claimed areas of the South China Sea.

Later in the week, Chairwoman of the National Assembly Nguyen Thi Kim Ngan invited India to explore for energy in the South China Sea. President-elect Trump also talked with Vietnamese Prime Minister Nguyen Xuan Phuc, saying that he “wish[ed] to cooperate with Vietnam to accelerate the relationship between the two countries.”

Beijing’s East China Sea fleet welcomed two new frigates this week. Franz-Stefan Gady at The Diplomat has more detailed information on the military capabilities of these ships. Less destructively, a new cruise ship will also start its maiden voyage through the South China Sea later this month. The ship will cruise by the disputed Paracel Islands. Ambassador to the UN Wu Haitao also gave a speech on China’s policy regarding “Oceans and the Law of the Sea.”

Tokyo and Beijing wrapped up their sixth round of maritime consultations to mixed results. The two countries pledged to increase cooperation on fisheries management and sign a rescue agreement as soon as possible. However, they failed to negotiate a breakthrough on a maritime hotline to avert accidental clashes in the East China Sea. Discussions will continue during a subsequent round of talks in Japan in the first half of next year.

President Rodrigo Duterte visited Cambodia this week for what would become the first State visit in 20 years. Prime Minister Hun Sen of Cambodia reportedly “has deep admiration for President Duterte” and “sees in him an ally in terms of standing up against Western countries in so far as non-interference in internal affairs” are concerned. It is unclear whether the South China Sea was discussed during Duterte’s visit, though greater defense cooperation was on the agenda.

President Duterte also announced that Manila would accept a firearms offer from Beijing. Defense Secretary Delfin Lorenzana said the military was also considering purchasing sniper rifles from Russia. Finally, a liaison to the US Embassy in Manila told reporters that next year’s joint amphibious landing exercise with the US would be canceled. US officials said that other joint exercises and consultations would continue.

Prime Minister Joko Widodo sought a middle path this week. He began by stating that the South China Sea should not “become a battlefield between big countries.” Widodo went on to announce that Jakarta is “ready to facilitate” a dialogue on the dispute. Later in the week Prime Minister Widodo met with Indian Prime Minister Narenda Modi. The pair released a joint declaration that “stressed the importance of resolving disputes by peaceful means, in accordance with universally recognised principles of international law, including UNCLOS.” The leaders also “recognised the importance of freedom of navigation and overflight on the high seas” and agreed to increase joint exercises “as strategic partners and maritime neighbors.”

After courting Beijing’s ire last week, Taiwan’s Tsai Ing-wen opened an exhibition on the South China Sea where she reaffirmed the government’s claim “upon all legal rights over the relevant waters in accordance with international law and the law of the sea.” She also vowed to safeguard Taipei’s sovereignty in the South China Sea and claimed that Taiwan would increase the frequency and length of its naval patrols around Taiping Island. Beijing Foreign Ministry Spokesperson Lu Kang responded that, “the Chinese people across the Taiwan strait share the responsibility to defend and preserve” historic rights in the South China Sea.

Clarifying a story from last week, a British Embassy Spokesperson said that, “the UK does not conduct Freedom of Navigation operations, although it will continue to exercise its rights to navigate through internationally-recognized air ways and international waters as needed.”

Donald Trump’s comments on China relations continue to provoke a stream of commentary. Jeffrey Bader at East Asia Forum provides an essential overview of the “One China” policy. Richard Bush at Brookings does much the same. Benjamin Schreer at The National Interest queries whether Trump’s actions will lead to a clash over Taiwan or other hot button issues in the region. Two more collaborative pieces by giants in the field ponder the US’ future role in the region: one at The National Interest and another from the Council on Foreign Relations. For the legally inclined, the American Society of International Law hosted an online symposium looking at this summer’s arbitral decision.

Finally, an editorial from the Global Times calls on Chinese leaders to “reshape” the South China Sea order.