Duterte walked back from his “separation” statement almost immediately upon landing in Manila, saying that he was only talking about “separation of foreign policy” and “not severance of ties . . . I cannot do that.” He went on to assert that, “It’s in the best interest of my countrymen to maintain that relationship” and reassured reporters that “there should be no worry about changes of alliances.” Foreign Minister Perfecto Yasay reflected a similar sentiment, but noted that Manila would still reject a “mindset of dependency and subservience.” President Duterte may have an expansive understanding of what this rejection might entail. Early in the week he declared that “maybe in the next two years, my country [will be] free of the presence of foreign military troops,” referencing US forces currently in the Philippines. Duterte also said that the United States could “forget” about their more recent bilateral defense agreement if he “stayed longer” (it is unclear what he meant by this term). US State Department spokesperson John Kirby responded that Washington is “going to take the long view” and not “react and respond to every bit of rhetoric.”

Additional details about President Duterte and President Xi’s discussions on fisheries access at Scarborough Shoal released this week, however, suggest that we should not be too quick to assume that Manila is aligning with Beijing. While Duterte said that, “I’ll leave it to the Chinese authorities, what they will do in the next few days,” it is unclear whether Manila and Beijing have arrived at a modus vivendi on fisheries access. Philippine representative Harry Roque Jr. revealed that no formal agreement was signed regarding Scarborough Shoal “because there was disagreement on the use of words.” China, apparently, wanted to “allow” or “permit” Philippine access and the Philippines wanted to “recognize” Scarborough as “traditional fishing grounds,” borrowing language from this summer’s arbitral decision. The tribunal found that both Chinese and Filipino fishermen have historic rights to fish in and around Scarborough Shoal, though the Chinese Coast Guard currently denies Philippine vessels access to the area.

President Duterte’s visit to Tokyo further complicated the region’s strategic calculus. Though Manila initially insisted that the South China Sea issues would not be discussed, they inevitably came to dominate the trip. President Duterte began by saying, perhaps less than plausibly, that talks with Beijing on disputes in the South China Sea “could be multilateral, and that would include Japan.” Duterte later assured Prime Minister Abe that “You can rest assured, and I give you my word, that we would stand by you when the time comes” and repeatedly asserted that the Philippines would not enter into a military alliance with China. Sources indicate that Abe told Duterte that US deterrence capabilities are essential to maintaining the rule of law in the South China Sea. By the end of the trip, Tokyo agreed to lease five surveillance aircraft and two large patrol ships to the Philippines, in addition to offering $47.3 million in loans for agricultural business promotion and peace-building in Mindanao, where Duterte once served as mayor. In total, approximately $2 billion in business-to-business deals were signed during the trip. 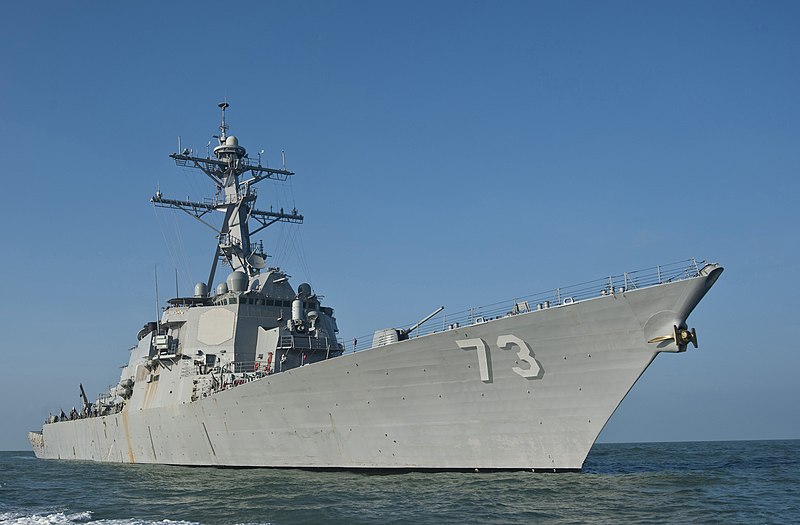 USS Decatur at sea for 2012 training exercise (Photo: US Navy)

Just as Duterte was finishing up in Beijing, the USS Decatur, a guided missile destroyer, sailed near Chinese-occupied features in the Paracel Islands to challenge “excessive maritime claims” as part of a freedom of navigation operation (FONOP). This is the first FONOP since this summer’s arbitral tribunal ruling. Chinese Foreign Ministry Spokesperson Hua Chunying said that the Decatur entered Chinese territorial waters “without the approval of the Chinese side.” Julian Ku suggests that this FONOP may have been intended to challenge China’s straight baselines around the Paracels, which the United States deems to have been drawn contrary to the Law of the Sea Convention. Regardless of the justification, Spokesperson Hua “warn[ed] the US to reflect upon its policy” and “stop provocative actions that damage China’s sovereignty, security, and maritime rights.” An opinion piece in the People’s Daily argued that FONOPs such as this “only highlight China’s necessity to strengthen defense, and activate China’s resolution to improve its capability to safeguard its own interests.”

Which turned out to be a particularly prescient statement. Less than a week later the Chinese Defense Ministry warned all shipping traffic to stay away from an area northwest of the Paracels as it conducted military drills.

This week’s FONOP was also notable as the first time that such an operation was conducted without the Japan-based Seventh Fleet in command. The Decatur was instead operated under the San Diego-based Third Fleet, which was only recently authorized to regularly command vessels in the Asia-Pacific to facilitate a quicker operational tempo. For more on the US FONOP program, see this compendium of reports from the Under Secretary of Defense for Policy.

Assistant Secretary of State for East Asian and Pacific Affairs Daniel Russel visited Manila to mend fences and clarify Duterte’s recent statements about the United States. After speaking with Foreign Minister Yasay, Russel said that “it’s a mistake to think that improved relations with China must come at the expense of good relations with the United States” and that “if ‘separation’ means that the government in Manila makes its own foreign policy decisions based on its own assessment of the Filipino national interests then there is no need for a change.”

US Forces Japan announced that sixteen F-35 fighters will be deployed to Japan in 2017. This is unlikely to be met with cheers from Beijing, where Defense Ministry Spokesperson Wu Qian recently accused the Japanese air force of locking radars on Chinese military aircraft, acting provocatively, and endangering safety.

President Duterte’s trip to Beijing and comments about the United States has provoked considerable domestic pushback. First, four senators expressed concern about the potential for abrogating the US-Philippines Mutual Defense Treaty and filed a resolution calling for a hearing on the government’s foreign policy. The senators more specifically called for a review of the 13 memoranda of understanding signed in Beijing last week. Former Foreign Secretary Albert del Rosario called Duterte’s declaration of separation a “national tragedy” and argued that, “we must be with responsible nations with whom we share our core values of democracy, respect for human rights and the rule of law.” Former Senator Sergio Osmeña asserted that Duterte “weakened” Manila’s claim to the South China Sea in negotiations over access to Scarborough Shoal. Supreme Court Senior Associate Justice Antonio Carpio, who has criticized Duterte in the past, urged the government to correct the President’s statement that China never invaded Philippine territory, pointing to China’s current occupation of Scarborough Shoal.

Hanoi was busy this week with visits from both United States and Chinese delegations. First, Secretary of State John Kerry met with senior officials, including Communist Party Executive Secretary Dinh The Huynh. Kerry told reporters that the United States and Vietnam share a commitment to the rule of law in the South China Sea. Huynh and Kerry also discussed the Trans-Pacific Partnership, which Hanoi has not put on its domestic agenda for ratification.

The 23rd Chinese naval escort force arrived in Cam Ranh Bay on Friday, where it will remain for five days to promote military-to-military ties. This is the first Chinese naval visit since Vietnam opened an international port facility capable of accommodating visiting warships in Cam Ranh Bay earlier this year.

Reports indicate the President Joko Widodo intends to spearhead a renewed push for a Code of Conduct for the South China Sea between ASEAN member States and China.

We start off with two excellent, more general pieces on the region. First, CSIS launched a new project, “Reconnecting Asia,” that that explores competing geostrategic visions for Asia’s future as understood by China, India, Japan, Russia, South Korea, and Turkey. A great resource for contextualizing much of what is at stake in the South and East China Seas. Second, Greg Austin at The Diplomat calls on scholars and analysts to be mindful of the potential for groupthink in analyzing China’s foreign policy and military ambitions.

This week’s FONOP generated considerable commentary. Our own Julian Ku provides a thorough primer on its legal import and explores possibilities for further US challenges to Chinese maritime claims. Robert Williams, also at Lawfare, explores how this FONOP impacts Vietnam’s maritime claims in and around the Paracels. Looking ahead, Lynn Kuok at The Wall Street Journal argues that this FONOP may also have important implications for future Chinese activity in the Spratly Islands.

The Global Times, a Chinese periodical, published three fascinating articles this week. First, noted Chinese scholar Shi Yinhong asserts that, “Beijing runs the risk of overreaching and reducing its surplus budget . . . if the focal points of Chinese diplomatic policies are too scattered, or if Beijing fails to calculate the possible risks in the One Belt and One Road initiative and the negative global response toward China’s increasing military power.” Shi calls on China to “hold off” on island building at Scarborough Shoal to prevent such overreach. Shen Dingli is less concerned about “strategic overdraft,” though he still worries that island building at Scarborough Shoal would lead Manila to “turn to the US.” Lastly, Liu Feng underscores the importance of fisheries in the South China Sea dispute and calls for restoring fisheries ecosystems and encouraging fishermen to work in other industries to decrease pressure on a dwindling resource.

Finally, no week would be complete without a heavy dose of Duterte analysis. Max Boot at the Chicago Tribune asserts that Duterte’s warming relationship with Beijing is a disaster for the US pivot to Asia. This perspective finds some support, by no means universal, in Jane Perlez’s survey of Chinese scholars. Picking up on a similar thread, a number of pieces explore how Duterte’s foreign policy may be empowering China in the region. The Asia Maritime Transparency Initiative at CSIS presents satellite imagery suggesting that it has become more, not less, difficult for Filipino fishermen to approach Scarborough Shoal. Richard Heydarian at The Straits Times provides an overview of Duterte’s “geopolitical drama on steroids” and warns that other Southeast Asian countries may forego their resistance to Chinese maritime claims. Donald Kirk at the South China Morning Post argues that China is unlikely to offer the kind of military aid that has traditionally been provided by the United States. Finally, peering into the past, John McBeth explores Duterte’s political socialization to trace the roots of his anti-American rhetoric.