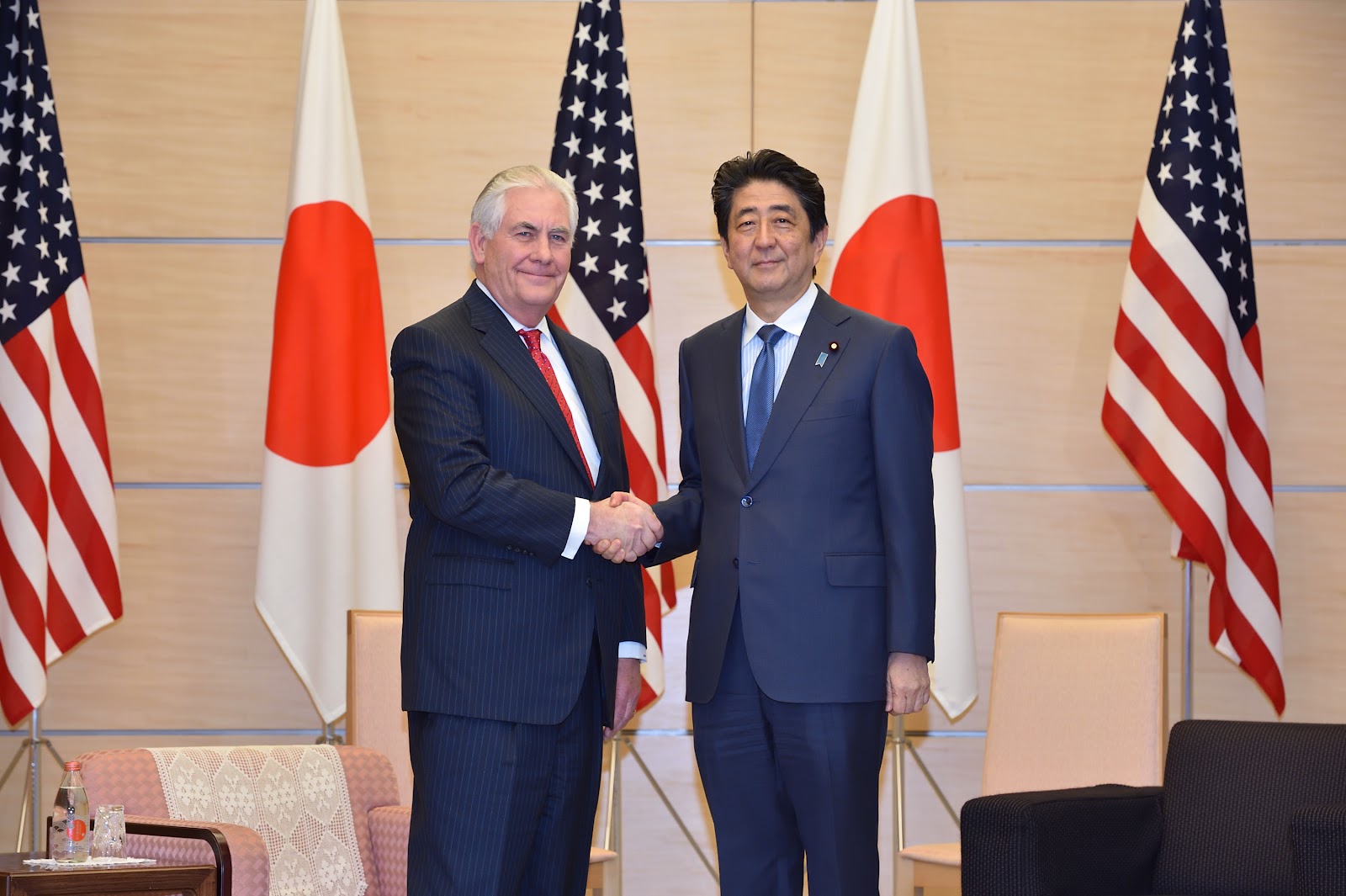 Acting Assistant Secretary of State for East Asian and Pacific Affairs Susan Thornton announced at a press briefing this week that the Trump administration was pivoting away from the Obama administration's pivot to the pacific. “Pivot, rebalance, etcetera—that was a word that was used to describe the Asia policy in the last administration,” said Thornton. While this administration will “have its own formulation,” Thornton stressed that the U.S. will “remain active and engaged in Asia.” Media outlets in both the U.S. and China have interpreted Thornton’s remarks as signaling a break from the Asia pivot policy. However, Thornton’s press briefing came on the eve of Secretary of State Rex Tillerson’s visit this week to Japan, South Korea and China. Tillerson’s trip follows a recent tour of the region by Secretary of Defense James Mattis, and it precedes Vice President Mike Pence’s anticipated visit to Japan, Australia, Indonesia and South Korea in April.

On Thursday, Tillerson met with Japanese Prime Minister Shinzo Abe and Foreign Minister Fumio Kishida. Although Tillerson and Kishida discussed the South China Sea, the main topics of discussion were North Korea and trilateral cooperation between the U.S., Japan and South Korea. In Seoul, Tillerson is scheduled to meet with Prime Minister Hwang Kyo-ahn, who is the acting president, and Foreign Ministry Yun Byung-se. The Secretary is not expected to meet with any opposition party figures, including Moon Jae-in who is favored to win the presidential election in May following this week’s impeachment of former South Korean President Park Geun-hye.

While Chinese and American officials have yet to release an agenda for Tillerson’s visit to Beijing, the Secretary and his team are expected to finalize details with their Chinese counterparts for an upcoming meeting between Chinese President Xi Jinping and U.S. President Donald Trump. This first meeting between the two leaders is expected to take place from April 6th to 7th at Mar-a-Lago, Trump’s resort in West Palm Beach, Florida. According to The New York Times, Chinese officials reportedly pushed for the more informal setting over Washington to reduce expectations for the two sides to produce any agreements from this meeting. The Times also reports that Senior Adviser to the President Jared Kushner has been conferring with Chinese Ambassador to the United States Cui Tiankai on preparations for this summit.

Meanwhile, the Fifth Session of the 12th National People's Congress (NPC) came to a close this week. As part of the NPC session, Chief Justice Zhou Qiang submitted a work report on behalf of China’s highest court, the Supreme People’s Court (SPC). The report announced an extension of the SPC’s maritime jurisdiction to include all seas under China’s “sovereign control.” According to Xinhua, Zhou highlighted that this change in judicial interpretation would contribute to “China’s strategy of becoming a major maritime power.” On the closing day of the NPC, Chinese Premier Li Keqiang held an extended news conference during which he stressed the importance of healthy U.S.-China relations. Specifically regarding trade tensions with the U.S., Li declared that "China doesn't want to see a trade war with the U.S." The Premier also reinforced comments made earlier in the NPC by Chinese Foreign Minister Wang Yi by noting the “substantial progress” that has been made in negotiations with ASEAN on a Code of Conduct for the South China Sea. Disputes in the South China Sea are expected to be a central issue for next month’s ASEAN Summit.

Following last week’s joint naval exercises with the United States in the East China Sea, sources say that Japan has developed fresh plans to conduct exercises in the South China Sea. Japan’s largest warship, an Izumo-class helicopter carrier, will be dispatched to the South China Sea for three months, beginning in May. After travelling through Singapore, Indonesia, the Philippines, and Sri Lanka, it will conduct joint naval exercises with the Indian and American navies in the Indian Ocean in July.

Reactions to the Japanese plan were mixed. A Chinese Foreign Ministry spokeswoman said that China was waiting for an official statement from Japan, but added that “If It’s only a normal visit, going to several countries, and passing normally through the South China Sea, then we’ve got no objections…But if going to the South China Sea has different intentions, then that’s a different matter.” Australia’s Foreign Minister Julie Bishop, when asked about the matter, said that Australia “supports the right of all nations and their vessels to traverse international waters according to international law.” Meanwhile, Japan invited Philippines President Rodrigo Duerte to visit the vessel when it stops in Subic Bay. Duerte said that he would do so “if I have the time.”

In addition, Japan and the United States will conduct joint exercises in the East China Sea, in response to a recent launch of four ballistic missiles by North Korea.

Military insiders told the South China Morning Post that China plans a fivefold increase in the size of its marine corps, from 20,000 to 100,000 personnel. The new marines would be stationed, among other places, in a Chinese-operated port in Djibouti and in southwest Pakistan. In addition, the People’s Liberation Army Navy, currently estimated at 235,000 personnel, will grow by fifteen percent. These plans give further detail to last week’s statements by senior Chinese military officials that China would continue to develop a “first class” navy.

Tensions continue between the Philippines and China over China’s maritime activities in the South China Sea. China’s Foreign Ministry spokesman, Geng Shuang, responded to concerns expressed by Philippine Defense Minister Delfin Lorenzana about the activities of Chinese ships in waters claimed by the Philippines. Lorenzana said that Chinese ships may have been conducting surveys for potential submarine routes in Philippine waters, and that he had ordered the navy “to drive [Chinese ships]...away” from Benham Rise. Geng acknowledged that Chinese research ships passed through locations near the Philippines last year, but stated that “this is purely carrying out normal freedom of navigation and right of innocent passage, and there were no so-called other activities or operations.” Taking a cautious tone, President Duerte stated that, with regard to the Benham Rise, the Philippine navy would “go there and tell them straight that this is ours,” but added that “I say it in friendship.”

Interactions between the Philippine and Chinese coast guards were friendlier. Philippine Coast Guard spokesperson Lt. Cdr. Armando Bailo said that the nations’ coast guards would engage in joint training exercise and reciprocal visits as part of improved relations between the two forces. He said that, in June, the Philippine Coast Guard will send twenty personnel to China, and by August or September, a vessel would sail from the Chinese Coast Guard headquarters in Guangdong to the Philippines. The two coast guards also entered into agreements regarding joint search and rescue operations, and are working towards an agreement on handling piracy and narcotics trafficking issues.

Lin Cheng-yi, Taiwain’s First Deputy Minister for Mainland China Affairs, expressed a hope that Taiwan would be included in dialogues concerning territorial claims to the South China Sea, due to the importance of navigational freedom to Taiwanese fishermen. However, he added that Taiwan did not take a position on the increased militarization of the waters.

Indonesian President Joko Widodo declared that Indonesia had territorial claims to 111 border islands, an increase from Indonesia’s 2005 claim to only 92 such islands. According to Maritime Affairs and Fisheries Minister Susi Pudjiastuti, “the enactment of these [111] islands is to prevent issues of occupation or claims of possession by other nations.”

Several commentators previewed Secretary Tillerson’s trip to Asia, especially the complications created by former South Korean President Park Geun-hye’s impeachment this week and China’s strong stance against the installation of the Thermal High Altitude Area Defense system in South Korea. Dan Blumenthal of the American Enterprise Institute argues that engagement alone will not arrest China’s “regional hegemonic ambitions.” Political analyst Richard Heydarian expects a more aggressive American stance against the Chinese in the South China Sea, while Dr. Joseph Chinyong Liow, Dean of the S. Rajaratnam School of International Studies in Singapore, believes the Trump administration should be assessed on its cautious actions rather than on the tough language it uses.

With media outlets reporting that the first Trump-Xi summit will occur in early April, Scott Kennedy of the Center for Strategic & International Studies outlined the five key questions that the Trump administration must answer in formulating its China policy. Questions however remain over the expertise of Peter Navarro, President Trump’s top China adviser and the director of the newly-created National Trade Council. Melissa Chan of ForeignPolicy.com interviewed Navarro and conducted a deep dive into his lack of China credentials.

The key to avoiding a conflict might be understanding early 20th century history, according to Thomas G. Mitchell. Writing for The National Interest, Mitchell suggests that a modern day Washington Naval Conference between the U.S., China, Japan, India and Australia that produces a naval arms treaty is key to preventing a confrontation in the South China Sea. Chow Chun-yan, an editor of the South China Morning Post, went all the way back to the 13th century reign of Kublai Khan to argue by analogy that China should focus on economic development rather than trying to match President Trump’s proposed military budget increases.