Tillerson Tells China What it Wants to Hear, while U.S. Partners Seek the Capability to Defend Themselves 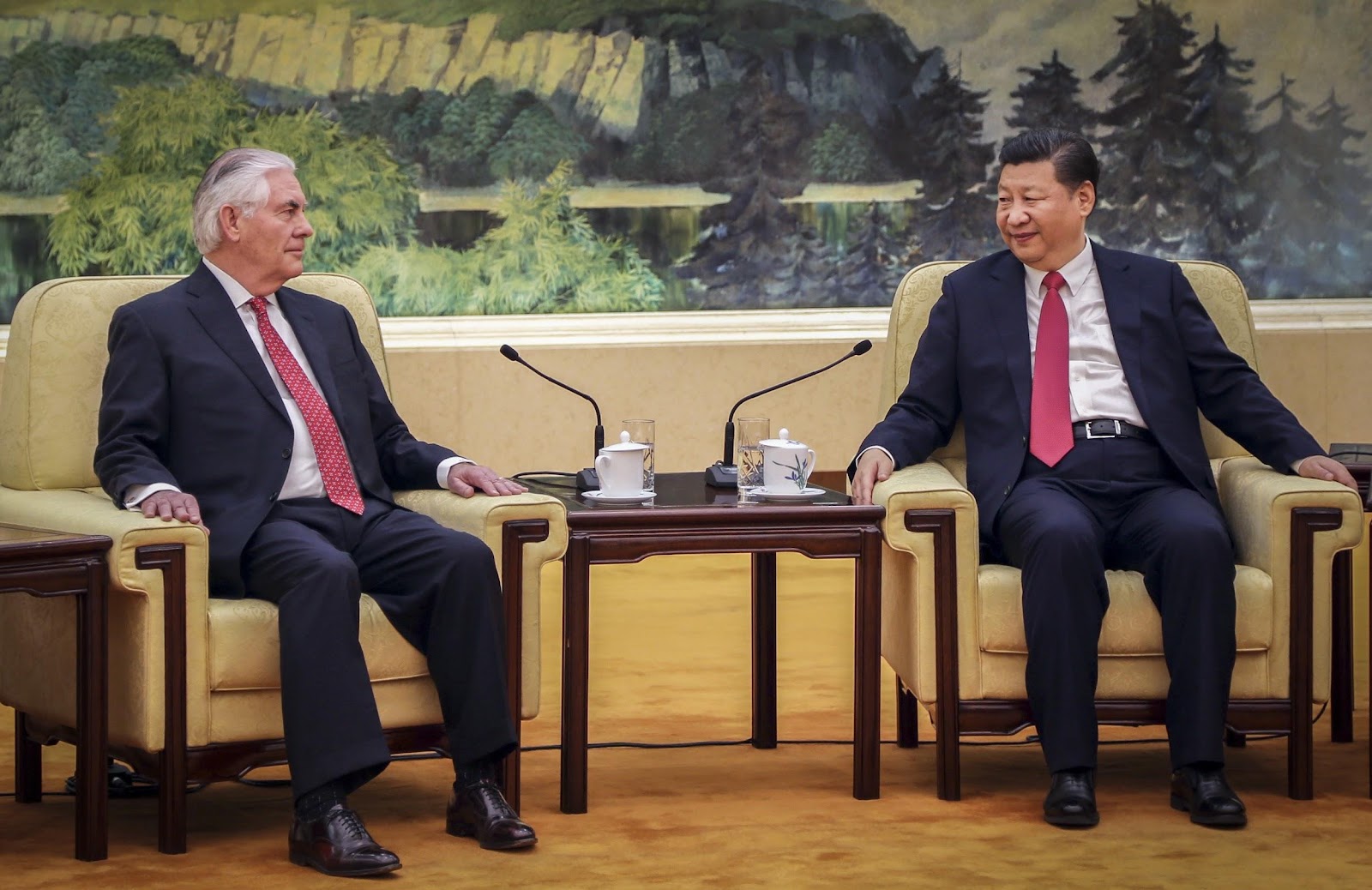 Secretary of State Rex Tillerson continued his tour of Asia over the weekend, visiting South Korea on Friday (though notably not dining with his hosts) and finishing up in Beijing on Saturday and Sunday. Prior to meeting with Chinese Foreign Minister Wang Yi on Saturday, Tillerson made waves when he said that the U.S.-China relationship is guided by an understanding of "non-conflict, non-confrontation, mutual respect, and win-win cooperation." Tillerson's phraseology, which he repeated a second time in the post-meeting joint press conference, mimicked language Chinese officials have used for years to advance the idea that the U.S.-China relationship should be one of co-equal powers.

Tillerson's words, if in fact intended as an endorsement by the Trump Administration of “a new model of great power relations,” represent a significant shift in the U.S. stance that may worry regional allies. The co-equal relationship, as envisioned by China, includes respect for the “core interests” of each country; in China's case, those include sovereignty over the South China Sea and the Senkaku Islands. Only time will tell if this is a pivot, and if so whether it will stick; or if it was just conciliatory talk meant to build goodwill ahead of future face-to-face meetings between presidents Xi and Trump.

Meanwhile, despite China’s promise to refrain from building on the Scarborough Shoal, a slip of the tongue by China’s South China Sea “mayor” Xiao Jie may indicate that China does not intend to keep that promise for long. Early this week, China’s Hainan Daily published an interview with Mayor Xiao in which he stated that China would build environmental monitoring stations on six formations in the South China Sea. Xiao said those formations include Scarborough Shoal, which lies just 120 nautical miles off the Philippines’s western coast and is claimed by both China and the Philippines. Hainan Daily soon edited the transcript of the interview to remove any reference to the Shoal and China’s Foreign Ministry disavowed the comments, while officials in Manila struggled to formulate a response. Philippine Justice Minister Vitaliano Aguirre prepared a bold protest to be filed with the United Nations arbitral tribunal at The Hague, but the country’s Department of Foreign Affairs instead settled on a more moderate response. The discrepancy highlights an ongoing debate in the country, as President Duterte seeks rapprochement with China in order to develop economic ties, while other politicians prefer a more hardline approach.

Duterte declined to speak out against the potential Chinese incursion, telling journalists “we can’t stop China from doing [its] thing.” Rather than resort to legal wrangling, Duterte said he would “consider sharing” the resources of the South China Sea with the Chinese. The dispute on the Philippines’ western coast is not unlike one off the eastern coast, where China has been operating survey vessels, raising questions over the country’s intentions in the Philippine Sea. Duterte attempted to strike a confident but pleasant tone this week, saying that he “trusts” China will not build on the Scarborough Shoal, and only drawing a line in the sand at exploitation of the South China Sea’s vast mineral resources.

Beijing will host further talks on the South China Sea Code of Conduct with ASEAN countries in May. Sources say the country also plans to cut approximately 25 percent of its army personnel, while it simultaneously expands its Marine Corps.

This week a bipartisan pair of U.S. Senators, Marco Rubio and Ben Cardin, introduced a bill to sanction countries that carry out construction and other proscribed actions in the East and South China Seas by, among other measures, prohibiting individuals and entities tied to the construction from traveling to the United States.

Chinese air traffic controllers contacted a U.S. bomber flying within the China’s controversial Air Defense Identification Zone (ADIZ) near the Korean peninsula, insisting the aircraft leave the zone. The pilots of the B-1B aircraft responded that they were conducting a routine operation in international airspace and “did not deviate from their flight path.” A back-and-forth over the ADIZ between China’s Foreign Ministry and the Pentagon followed.

At a meeting in Paris on Monday, Japanese Prime Minister Shinzo Abe and French President Francois Hollande reaffirmed the two nations’ commitment to “ensuring a free and open maritime order in the Indo-Pacific region and of continuing to support the stability and prosperity of this region." Abe also announced that Japan's Maritime Self-Defense Forces (JMSDF) will participate in joint naval exercises with France, the United States, and Britain later this year in the western Pacific.

On Wednesday, the JMSDF commissioned the JS Kaga, the second of its Izumo-class helicopter carriers. Speaking at the commissioning ceremony, Vice Minister of Defence Takayuki Kobayashi called out the Chinese for their actions in the region: “China is attempting to make changes in the South China Sea with bases and through acts that exert pressure is altering the status quo, raising security concerns among the international community.” The next day, Chinese Foreign Ministry spokesperson Hua Chunying responded: “The situation in the South China Sea is stable through the joint efforts of China and ASEAN countries. China and its neighbors will never allow Japan to make trouble." Hua also highlighted that the Kaga shares the name of the Japanese carrier sunk by the U.S. at the Battle of Midway in World War II and expressed China’s “hope [that] the Kaga's reappearance is not [a] resurgence of Japanese militarism."

Taiwanese President Tsai Ing-wen launched the island's first ever home-grown submarine project on Tuesday, presiding over a formal signing ceremony to initiate the project between the navy, local shipbuilder CSBC Corp., and the National Chung-Shan Institute of Science and Technology. The decision to begin domestic development comes after years of fruitless negotiations with the United States and outright refusals by other countries wary of China’s wrath. Taiwan’s current submarine fleet consists of two World War II-era U.S. vessels and two Dutch vessels built in the 1980s. CSBC plans to finish construction on the submarines in 2024, for full deployment two years later after testing.

Philippines President Rodrigo Duterte wrapped up a series of introductory visits with the leaders of ASEAN member countries on Tuesday, meeting with Thai Prime Minister Prayuth Chan-ocha and other senior officials in Bangkok. Discussions focused primarily on economic engagement, but in a joint statement the two leaders affirmed the importance of maintaining peace and stability in the South China Sea, emphasizing “the need for the full and effective implementation of the Declaration of the Conduct (DOC) of Parties in the South China Sea in its entirety and express[ing] their shared determination to complete the Framework of the Code of Conduct by 2017.”

Next week, the Philippines will receive the first two of five TC-90 utility aircraft it leased from Japan, Japan’s Ministry of Defense announced on Monday. The remaining three aircraft will arrive by the end of the year, under a deal that also includes pilot training and aircraft maintenance support.

On Tuesday, at the International Maritime and Aerospace Exhibition in Kedah, Malaysian Prime Minister Najib Razak emphasized the need for Malaysia to upgrade its defense capability despite budget cuts. Naval modernization, led by the procurement of four littoral mission ships (LMS) built in collaboration with China Shipbuilding and Offshore International Co (CSOC), will take priority.

Vietnamese Prime Minister Nguyen Xuan Phuc sought South Korea’s support for Vietnam’s position on South China Sea disputes, according to a government statement released after a meeting on Monday between Phuc and South Korean Foreign Minister Yun Byung-se. The statement did not say how Yun responded.

Separately, Singaporean Prime Minister Lee Hsien Loong visited Phuc in Hanoi. The two leaders discussed the importance of freedom of navigation in the global commons and the need for maritime disputes to resolved "in accordance with the international law including the U.N. Convention on the Law of the Sea.”

Much of this week’s analysis centered on the consequences of what an inept or uninterested United States might mean in the context of an emboldened China. While the Philippines’ Duterte is eager to “trust” China, Raul Pincel of the Straits Times warns Duterte not to forget the deception that followed Chinese promises not to build on Mischief Reef, and says Duterte’s meek rhetoric invites further Chinese expansion. And Pincel is not alone. U.S. Rep Ted Yoho says the U.S. must not neglect the South China Sea question for three reasons: the immense potential consequences should the China-U.S. tension in the South China Sea erupt, the need for the U.S. to retain its role as a regional policeman, and the potential for China’s unchecked expansion to degrade the international order. Without an engaged United States, Richard Javad Heydarian worries Duterte has nowhere to turn but to China, and he encourages Trump not to lose sight of the stakes and thereby drive Duterte further into Beijing’s embrace.

Peter Jennings of the Australian Strategic Policy Institute maps out “alternate futures” for the Trump administration along two axes: isolationism-engagement and stability-instability. He calls on present U.S. allies to nudge Trump toward a “tougher status quo.” He Fan of Peking University urges Australia and China, whose populations generally favor globalization, to work together to salvage the international trade regime, suddenly left without its greatest proponent.

Robert Farley of The Diplomat responds with skepticism to a proposal for a “new” Washington Naval Treaty. Farley says because the potential benefits from such an agreement are enormous, but the conditions that made the original treaty possible are not currently present.

And in testimony before the House Armed Services Committee on Wednesday, Andrew Shearer of the Center for Strategic and International Studies discussed China’s hybrid warfare strategy and the creeping militarization of the South China Sea. Shearer explains how China has employed a “salami-slicing” approach to advancing its political and territorial interests, steadily expanding its control without taking any action that on its own would trigger a forceful response from the United States and its allies, and says that U.S. leadership in the region remains critical for deterring aggression and maintaining stability.