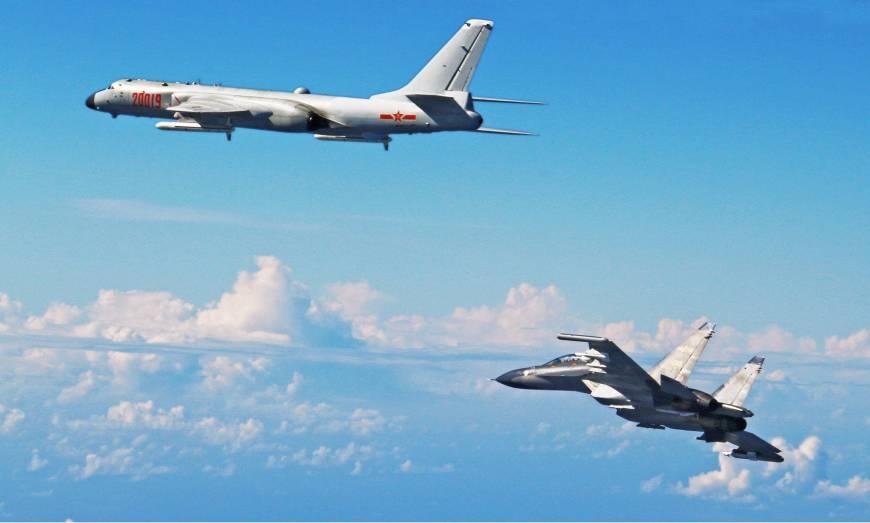 This week, the Chinese navy and air force carried out extensive operations—some of them unprecedented—in and around Japanese, Taiwanese, and American territorial waters. Beijing took a defiant tone when the appropriateness of these operations was questioned.

Last Thursday, the Chinese People’s Liberation Army Air Force flew six Xian H-6 bombers over the Miyako Strait, which lies between the Japanese islands of Miyako and Okinawa. That night, Japan’s defense ministry called the flyover “unusual,” but noted that Japanese airspace had not been violated. Ren Guoqiang, the Chinese Ministry of Defense spokesperson, said that the air force was conducting a regular drill that should not cause alarm or speculation. “This is a routine,” said Ren. “The activity of Chinese warplanes flying across the Miyako Strait is legal and appropriate.” Indeed, the Chinese military is planning conduct more far-sea exercises like it in the future and the relevant parties, Ren added, should simply “get used to it.”

Just a few days later, on Saturday, a pair of China Coast Guard ships passed into Japanese waters near Kyushu that they have never previously entered, according to the Japan Coast Guard. When the first Chinese ship entered Japan’s territorial waters just before noon, the Japan Coast Guard requested that it leave immediately. The Chinese ship complied, but then returned with another ship a few hours later. Both exited by mid-afternoon. On Monday, however, the Japan Coast Guard reported that several more Chinese ships had entered Japanese waters: two in the Sea of Japan off of Aomori Prefecture, and four around the Senkaku Islands in Okinawa Prefecture. On Tuesday, Japan’s Chief Cabinet Secretary Yoshihide Suga stated that the Chinese ships had complied with relevant United Nations maritime rules, and that nothing indicated that the ships “acted in any way that would mean they would not deserve the right of innocent passage.” Nevertheless, the Yomiuri Shimbun reported that Japan’s “government is increasing its vigilance against Chinese government vessels entering Japan’s territorial waters, believing that China may have been intentionally repeating such acts.”

Meanwhile, Taiwan’s Defense Ministry reported last Thursday that Chinese aircraft had skirted the edges of its Air Defense Identification Zone (ADIZ) without actually entering it, but said that it “closely followed” their progress.

In addition, various U.S. officials reported that a Chinese naval vessel was operating approximately 100 miles off of the Alaska coast, in international waters. U.S. Navy Capt. Scott Miller, spokesperson for the North American Aerospace Defense Command, said that the ship was believed to be a “communications” or “intelligence” vessel, but did not offer a view as to the reasons behind the ship’s presence. Chinese Ministry of Foreign Affairs Spokesperson Geng Shuang said that he could not confirm a report that the ship was gathering information regarding a planned test of an American THAAD missile defense system. “I'm not aware of this,” he stated. “I will refer you to the military if you're interested.” CNN reported, however, that at least some U.S. officials considered this to be the ship’s mission.

The PLA Air Force acknowledged its operations in Japan and Taiwan in a statement on its official microblog. “China's air force over the past week conducted multiple drills far out at sea, with H-6K bombers and many other types of aircraft flying through the Bashi Channel and Miyako Strait, testing actual battle capabilities over the sea,” it reported, and stated, in concurrence with the defense ministry, that the operations would be ongoing.

To put these events in some perspective, however, Japan’s Air Self Defense Force reported that it had scrambled its fighter jets to intercept Chinese air force aircraft 101 times between April and June, down from 199 from the same period last year.

Chinese Ambassador to the United States Cui Tiankai addressed the U.S. National Governors Association Meeting last week at in Providence, Rhode Island. In his remarks, Ambassador Cui warned of “troubling developments” that could derail the U.S.–China bilateral relationship. Although Ambassador Cui did not elaborate on what he meant by “troubling developments,” his speech highlighted several ways that the two countries could resolve their economic disagreements. Cui specifically mentioned the need to improve the Committee on Foreign Investment in the United States, the inter-agency process by which the U.S. reviews foreign investment, and he emphasized the importance of the US-China Comprehensive Economic Dialogue.

The Dialogue, one of the four consultation mechanisms that was announced during President Xi’s visit to the United States in April, took place this past Wednesday in Washington. U.S. Commerce Secretary Wilbur Ross and Treasury Secretary Steven Mnuchin were joined by Chinese Vice Premier Wang Yang. However, the meetings on Wednesday ended with the cancellation of a previously scheduled news conference and without any joint statement or new announcements. A senior U.S. official told Reuters that discussions between the American and Chinese delegations were frank, but that the two sides failed to agree on the bilateral trade and economic issues that are priorities for the Trump administration. Yet a spokesperson for China’s Ministry of Foreign Affairs characterized the economic dialogue as a success, noting that the two sides reached “extensive consensus” during the meetings.

Last Friday, the U.S. House of Representatives passed the National Defense Authorization Act (NDAA) for 2018, which included an amendment requiring the Secretary of Defense to look into the feasibility of reestablishing ports of call between the U.S. and Taiwanese navies. In response to a question about that particular provision, Chinese Ministry of Foreign Affairs Spokesperson Lu Kang cautioned that the NDAA could “harm the general interests of China-U.S. relations.” According to Lu, China has already lodged “stern representations” with the U.S. over the sections of the NDAA that purportedly conflict with the one China policy and the three joint communiques between China and the United States.

Over on the other side of the Capitol Building, the Senate confirmed William Hagerty as the new U.S. Ambassador to Japan. During his confirmation hearing in May, Hagerty reassured the Senate Foreign Relations Committee of the Trump administration’s commitment to the U.S.-Japan alliance.

Congressional Republicans also used the specter of a “bellicose” China to call for increased military spending. On Thursday, the Republican Study Committee, a group of 172 House Republicans, unveiled its proposed budget. Among other specific proposals, the budget calls for an increase in the U.S. Navy’s fleet from its current size of 275 to 350 fighting ships. Meanwhile, Senator Cory Gardner while addressing a conference on the South China Sea organized by the Center for Strategic & International Studies promoted his own Asia-Pacific security plan: the Asia Reassurance Initiative Act. According to Gardner, the legislation “would authorize funds to bolster US military presence in the [Pacific] region” and “enshrine a policy of regularly enforcing U.S. freedom of navigation operations and overflight rights in the East and South China Seas.”

Last Friday, the Indonesian National Armed Forces signed a memorandum of understanding (MOU) under which it would safeguard offshore drilling and exploration operations conducted by the Indonesian Ministry of Energy and Mineral Resources. According to General Gatot Nurmantyo, the Commander of the Indonesian military, the decision was necessary because Indonesia’s oil and gas drilling operations are often disturbed by “foreign-flagged vessels,” which are generally believed to be Chinese vessels. Regional experts view the MoU as an sign of Indonesia’s growing concern with Chinese encroachment onto its territorial waters.

On the same day of the MOU's signing, the Indonesian government also unveiled a new name for the northern part of its exclusive economic zone: North Natuna Sea. On Tuesday, Indonesian Maritime Affairs and Fisheries Minister Susi Pudjiastuti defended the renaming of North Natuna Sea against criticism from China’s Ministry of Foreign Affairs. Susi told reporters that Indonesia has the right to rename because the “North Natuna Sea falls within [Indonesian] territory, not within the South China Sea.” Susi also noted in her comments that the full potential of the North Natuna Sea has yet to be realized because of illegal fishing by foreign vessels. In fact, since January of this year, Indonesian authorities have arrested 138 such foreign-flagged vessels illegally fishing in North Natuna Sea.

This week, the Center for Strategic and International Studies in Washington, D.C. held its seventh annual South China Sea Conference. Video recordings of the panel discussions are available here.

Writing in the South China Morning Post, Benoit Hardy-Chartrand argues that, one year after the UNCLOS arbitral tribunal's ruling on competing Philippine and Chinese claims in the South China Sea, the détente between the two countries has created a 'false calm.’ He says that China has taken advantage of the decrease in tensions with Manila to enhance its footholds on various South China Sea features, while Beijing’s territorial ambitions remain unchanged. However, he says, as Japan, the United States, and other countries continue to push back against China’s territorial claims, this “current lull may not last.”

Other analysts offered conflicting views of the China-Japan relationship in the South China Sea. According to Professor Zhiqun Zhu of Bucknell University, the shifting historical and economic relations between the two countries has led to a situation where both countries’ populations are generally hostile to one another: “[s]ome Chinese developed a bloated sense of nationalism, belittling Japan; while the Japanese developed a conflictual attitude towards China—marveling at its rapid growth but sneering at its society.” He advises that the countries must change their view, since “[i]t is not in the interests of either nation to have a prolonged frosty relationship.” J. Berkshire Miller, a fellow at the Council on Foreign Relations, offers a counterpoint in Foreign Affairs, arguing that Japan and China have already embarked on a cautious project of improving their relations and mending ties.

Ryan Martinson and Katsuya Yamamoto, writing in the National Interest, evaluate China’s naval ambitions. They argue that the conventional wisdom—that the PLA Navy is focused on combat operations within the “First Island Chain,” which extends from Japan to Borneo, but on peaceful, diplomacy-building operations beyond it—is not valid. Based on their analysis of internal PLA Navy documents, they conclude that “China is building the capacity to project high-end combat power well beyond its jurisdictional waters.”

Ralph Jennings argues in Forbes that the interests of India, Japan, Vietnam, and the United States align towards effectively curtailing Chinese domination of the South China Sea.