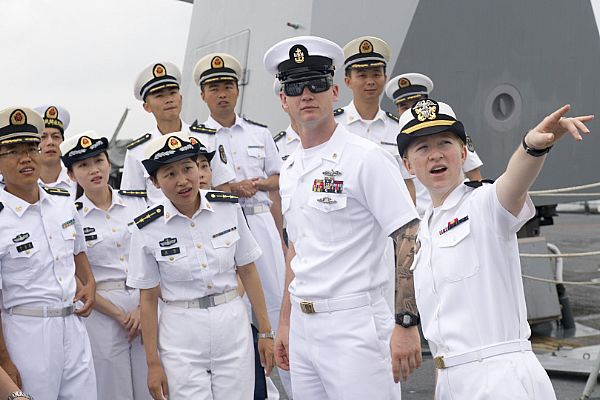 Just weeks after China’s roll-out of the world’s largest deep sea offshore platform, further developments in China’s exploration efforts affirm the country’s intent to explore the South China Sea’s oil and gas resources, and promise to add fuel to the region’s already simmering tensions. This month, a joint China-US research expedition shed light on the geological phenomena that caused the South China Sea’s formation, and the research is expected to have implications for hydrocarbon exploration efforts. In addition, China and Japan have recently made progress in their nascent efforts to mine methane hydrate, a combustible substance believed to be abundant in the South China Sea, but whose commercial viability is uncertain.

In related news, prominent Filipino political figure Jose de Venecia, Jr. voiced support for a joint exploration program in the South China Sea, asking, “Why are we willing to go to war . . . when we can have a commonsensical, practical, imaginative, pragmatic oil negotiation in the South China Sea where everyone participates?” Venecia criticized the region’s dependence on oil imports from the Middle East “when we have oil and gas right in our own front yard.” While Philippine Supreme Court Justice Antonio Carpio (a vociferous critic of President Rodrigo Duterte) says such a proposal is impossible on Constitutional grounds, Venecia believes a workaround is possible, citing developments in other disputed regions such as the North Sea. Venecia further suggested a creative use of last year’s Hague arbitration ruling: the country could use it as bargaining leverage in the inevitable negotiations over how to divide the proceeds from the joint exploration operation.

But even cooperative natural resource exploitation has its negative consequences: dredging, over-fishing, and oil exploration, in particular, have contributed to the rapid degradation of the marine ecosystem. As China looks to establish itself as a global leader on climate change in the wake of the United States’s announcement that it will withdraw from the Paris climate accords, there may be an opportunity to raise the profile of environmental preservation concerns in regional negotiations.

Late last week, United States Pacific Command announced that two Guam-based US Air Force B-1B bombers had overflown the South China Sea in a 10-hour joint training exercise with a United States Navy guided-missile destroyer, the USS Sterett. The bombers are part of the US’ Continuous Bomber Presence operations in the Pacific region. Chinese authorities issued a muted statement in response, saying only that they continue to monitor U.S. military activity in the region and that “China will resolutely safeguard national sovereignty.” Despite the tensions, the Sterett’s previously-planned visit to Zhanjiang, home to China’s South Sea Fleet, went off as scheduled this week.

Panama, a country with an unusually strong economic link to China due to its prominent role in global trade, announced it would cut ties with Taiwan and embrace the People’s Republic of China as the country’s legitimate representative. In the statement, Panama referred to Taiwan as “an inalienable part of the Chinese territory.” In response, China’s Taiwan Affairs Office admonished Taiwan to make the “wise choice” by accepting the “one China” principle. After Panama’s change of heart, only 20 countries (including the Vatican) are left that maintain formal diplomatic relations with Taiwan.

Speaking at an international arms exhibition on Monday, the head of the Japanese Defence Ministry’s Acquisition Technology and Logistics Agency conveyed Japan’s interest in sharing more military technology and equipment with Southeast Asian partners. Expanding the domestic defense-manufacturing industry, so as to position Japan to better compete with China and others as an exporter of choice in the region, has been a priority of the Abe government since it lifted restrictions on military development in 2014.

Over the weekend on Lawfare, Peter Dutton and Isaac Kardon of the U.S. Naval War College made the case for the U.S. engaging in the “routine exercise of freedom of navigation” to support broad national interests, rather than limiting its action in the South and East China Seas to reactive FONOPs challenging specific legal claims. Consistent, proactive assertions of the right to operate freely, they argue, send a clearer message to China and should be the heart of U.S. naval strategy in the region. In Foreign Affairs, Ely Ratner of the Center on Foreign Relations calls for a “course correction” in U.S. policy towards the South China Sea, which he argues has been too permissive with regard to Chinese expansionism in recent years. To halt China’s growing dominance, Ratner recommends the U.S. work with regional countries to reclaim and fortify sovereign territories, conduct more realistic joint exercises, develop and field “counterintervention” platforms like surveillance drones and fast-attack naval vessels, and, if necessary, seek expanded access to local bases for U.S. and allied forces.

On The Diplomat, former French diplomat Yo-Jung Chen anticipates increased French diplomatic and military activity in Southeast Asia in the future, picking up on French Defense Minister Jean-Yves Le Drian’s mention at the Shangri-La Dialogue of the possibility of a “regular and visible presence” in the region, including joint EU maritime patrols. France has long been involved in the region, if less visibly so in recent history, and has both principled and economic reasons for deepening its engagement going forward.

Tongfi Kim of Vesalius College in Brussels writes that uncertainty regarding the United States’ commitment to Asia-Pacific security should prompt countries in the region to build “minilateral” alliance structures among themselves, rather than rely as heavily on bilateral ties with the United States and large multilateral institutions like ASEAN. U.S. allies need to develop local mutual security commitments and be prepared to challenge China even if partially abandoned by the United States, he says. Feng Zhang, a Fellow at the Australian National University and Adjunct Professor at the National Institute for South China Sea Studies in China, ponders what China can do to take advantage of the uncertainty the Trump Administration has caused regarding the United States’ commitment to its defense alliances. Suspicion about China’s ambitions remains high throughout the region, but skillful diplomacy may allow China to ease tensions and keep counterbalancing activity in check.

Elliot Brennan with the Institute for Security and Development Policy, Sweden, considers Australia’s defense strategy in the South China Sea in historical perspective, highlighting the continuity between a 1959 intelligence assessment of the region, defense white papers from the late 1980s and early 1990s, and government policies and actions today. The South China Sea has been “central national interest” for Australia for over sixty years, he says, and the country must not falter in the face of shifting power dynamics in favor of China. And on the blog of the Australian Strategic Policy Institute, Professor Donald Rothwell argues that Australia should “resolve any ambiguity about the freedom of navigation of its warships [by] joining the US in [freedom of navigation operations]” in the South China Sea. Such actions would demonstrate Australia’s resolve to uphold international law and challenge China’s efforts to control vital sea and air lanes.