U.S. Conducts Its Fourth FONOP in Five Months, as the U.K. Revises Its Policy on FONOPs in the South China Sea 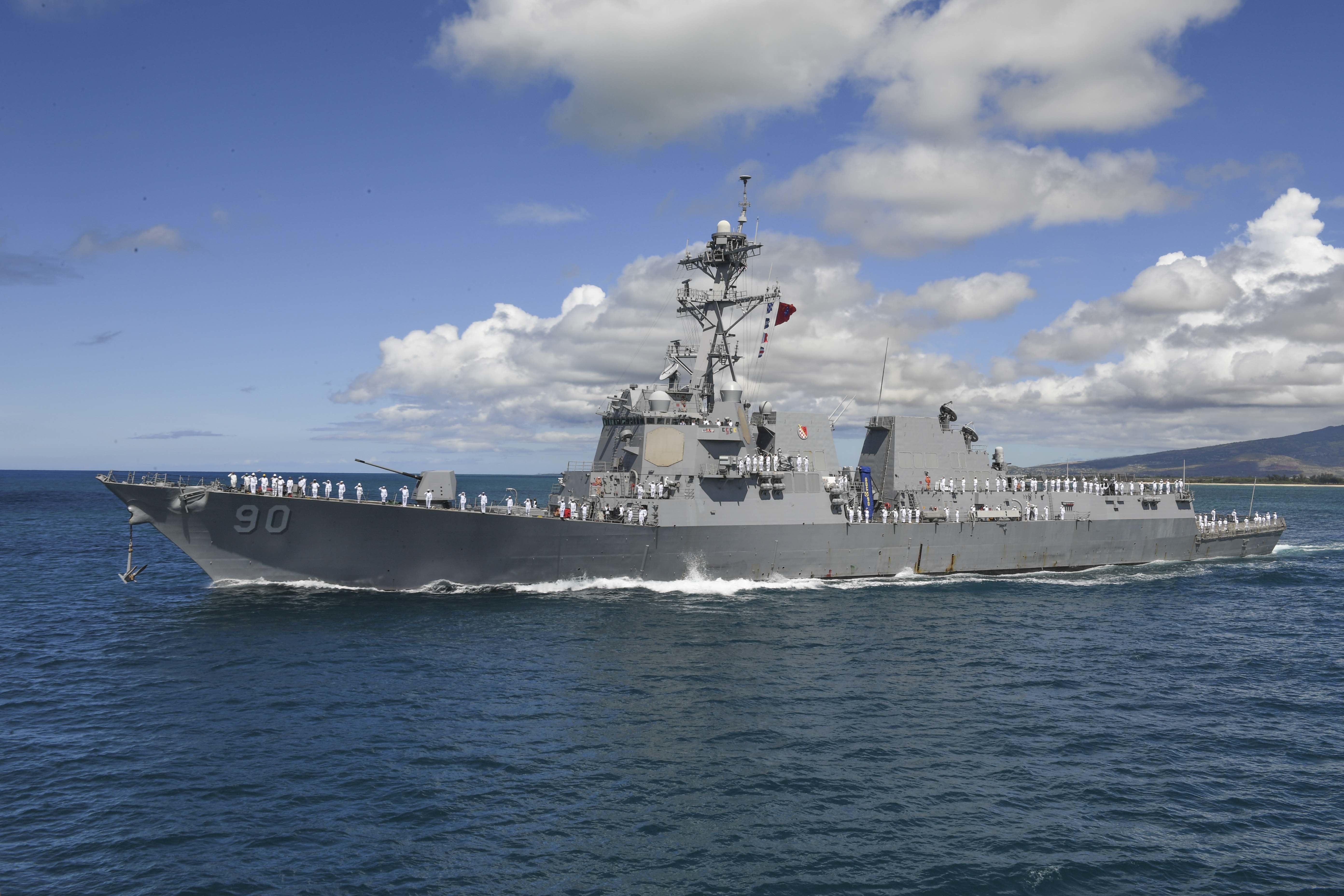 This week, the U.S. Navy conducted the Trump administration’s fourth freedom of navigation operation (FONOP) in the South China Sea, while the United Kingdom seemingly reversed its policy on such operations.

On October, the USS Chafee conducted a FONOP near the Paracel Islands in the South China Sea. The guided-missile destroyer reportedly came within 16 nautical miles of the Paracels, which have been controlled by China since 1974. The USS Chafee notably did not pass the 12 nautical mile threshold that would delineate territorial waters under the United Nation Convention on the Law of the Sea. U.S. naval vessels conducting FONOPs generally sail within 12 nautical miles of the disputed island to indicate that the United States does not recognize the territorial claims. Pentagon officials did not comment on the specific operation but reiterated that the United States carries out regular FONOPs and will continue to do so.

The Chinese People’s Liberation Army responded to the Chafee by deploying a warship, two fighter jets and a helicopter, according to a press release by the Chinese Ministry of Defense. Pentagon officials confirmed the PLA response but noted that the interaction between the PLA forces and the Chafee was “safe and professional.” The Defense Ministry also stressed that the “Chinese military will further strengthen its naval and air defense capability to safeguard its sovereignty and security.” On the diplomatic side, the Chinese Ministry of Foreign Affairs lodged “serious representations” with U.S. officials over the Chafee’s operation, according to Hua Chunying, the spokesperson who addressed the issue during the Ministry’s daily press conference. Hua also urged the United States to “faithfully respect China’s sovereignty and security interest as well as regional countries’ efforts to uphold peace and stability in the South China Sea and stop such wrongdoings.”

Meanwhile, the United Kingdom appears to be changing its position on FONOPs in the South China Sea. According to the Sydney Morning Herald, when Defense Secretary Michael Fallon was asked about FONOPs at a Conservative Party conference earlier this month, he replied that while that while British military did not plan to conduct FONOPs to challenge China’s territorial claims in the South China Sea. “We will exercise our right of navigation,” Fallon said, but “the Americans have been carrying out specific exercises throughout some of the disputed islands, and we’re not, we don’t have plans to do that.”

This pronouncement seems to reverse the U.K. government’s position from July, when Foreign Secretary Boris Johnson stated that the Royal Navy would deploy its two new aircraft carriers to soon conduct FONOPs in the South China Sea. At the time, Defense Secretary Fallon himself confirmed that Britain planned to send a naval vessel to the South China Sea to conduct a FONOP.

Taiwanese President Tsai Ing-wen delivered a speech in front of the Presidential Office Building commemorating Taiwan’s National Day on October 10th. During her address, President Tsai highlighted previously announced plans to utilize Taiping Island–also known as Itu Aba Island–as a regional center for humanitarian assistance and logistical. The disputed territory is the largest naturally occurring island of the Spratlys and is also claimed by China, the Philippines and Vietnam. In addition, Tsai mentioned in her speech that Taiwan is building “a station to monitor greenhouse gases” on the Dongsha Islands, which are also claimed by China but controlled by Taiwan. Tsai called these plans to develop the Taiping and Dongsha Islands “a source of pride for the Taiwanese people and a force for stability, peace, and prosperity in the region.”

Earlier this month, the Armed Forces of the Philippines and the Philippine National Police received a donation from China of three thousand M4 rifles, three million rounds of ammunitions and 90 sniper scopes. At the donation ceremony, the Chinese ambassador to the Philippines, Zhao Jianhua, avowed that China is “committed to friendly and cooperative relations with the Philippines.” Ambassador Zhao pointed to the donation of arms, ammunitions, and accessories as “another demonstration of China’s commitment” to maintaining these relations.

At the same event, Ambassador Zhao sought to reassure the Philippine public about the presence of Chinese ships in the South China Sea. Noting that it was “quite natural” for Chinese ships to be in disputed waters, because the countries shared overlapping claims, Zhao also stated that China had no intention of settling maritime disputes with the Philippines by force.

Two Australian naval vessels arrived in Manila on Tuesday for a good will visit. The HMAS Adelaide, a landing helicopter dock, and the HMAS Darwin, a guided missile frigate, were greeted by Australian Ambassador to the Philippines Amanda Gorley and Philippine naval officials. Later in the day, Philippine President Rodrigo Duterte toured the Adelaide and thanked Ambassador Gorley, the Australian officers and the crew.

The five-day port call is part of one of the largest deployment of Australian military assets to the region in several decades. According to Cpt. Jonathan Earley, the head of the Australian military contingent, the two ships plan to participate in humanitarian aid and disaster relief drills with the Philippine military. Earley was clear that there were no plans for these ships to conduct a FONOP in the South China Sea. He nevertheless affirmed Australia’s “strong interest in regional security and respect for international law…[including] the freedom of trade, and the ability to exercise freedom of navigation and overflight where required.”

This week’s commentary focused on U.S. and Japanese strategy regarding the Senkaku Islands. Tetsuo Kotani, executive director and secretary-general of the Japan Institute of International Affairs, penned an op-ed in the Japan Times calling on President Trump to visit Okinawa during next month’s visit to Japan. Comparing Okinawa to the DMZ, Kotani argues that President Trump should visit “the frontlines” of the East China Sea maritime disputes in order to emphasize that the United States protects the Senkaku Islands under the U.S.-Japan security treaty. The op-ed notes that Adm. Harry Harris, commander of U.S. Pacific Command, made a similar visit in May when he visited Yonaguni Island, which is just 80 nautical miles from the Senkaku island chain.

Meanwhile, Grant Newsham of the Japan Forum for Strategic Studies outlines a plan in the Asia Times for Japan to defend its islands from China. In response to the steadily escalation of military activity near disputed islands in the East China Sea, Newsham calls for regular and frequent air and naval patrols and exercises with American forces in the areas surrounding the Ryukyu Islands, Japan’s southern chain of islands stretching into the East China Sea. Newsham further calls on Japan and the United States to end “decades of timid behavior” that have “put [the Senkaku Islands] at risk” by using two maritime firing ranges near the islands that have been dormant since the Carter administration.

Finally, former Secretary of State Henry Kissinger gave a speech at Columbia University last month calling for a more cooperative U.S.–China relationship. In response, Professor Panos Mourdoukoutas of LIU Post acknowledged that economically such a relationship makes sense but expressed pessimism that the two countries could cooperate when it comes to the South China Sea. According to Mourdoukoutas, the two countries have fundamental disagreements about what the definition of the South China Sea. While “Washington and its allies think of the body of water as an open sea[,] Beijing thinks that [the South China Sea] is its own sea.”

Water Wars is our biweekly roundup of the latest news, analysis, and opinions related to ongoing tensions in the South and East China Seas. Please email Sarah Grant with breaking news, relevant documents, or corrections