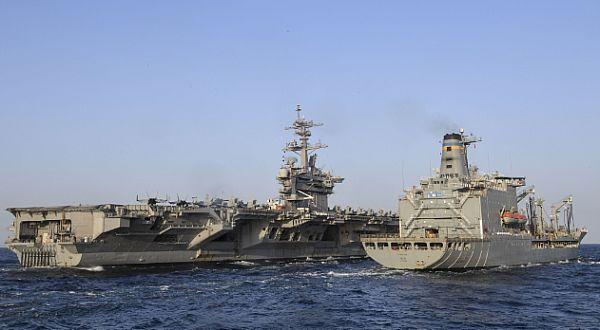 This week, American officials sought to allay concerns that Washington is failing to address China’s activities in the South China Sea, which have showed no signs of slowing.

On Monday, U.S. Pacific Fleet Commander Admiral Scott Swift defended the lack of U.S. Navy Freedom of Navigation Operations (FONOPs) in the South China Sea. He said that the Trump administration has not changed U.S. Navy policy regarding FONOPs, which are maneuvers designed to assert the right of ships to travel freely in the disputed waters. All of the Navy’s requests to conduct such operations in the South China Sea have been denied by the Pentagon since President Trump took office.

Many analysts have speculated that the lack of American FONOPs has been driven by President Trump’s desire to avoid aggravating China as he seeks to enlist President Xi’s assistance in denuclearizing North Korea. According to Richard Heydarian of De La Salle University in Manila, FONOPs “have become over the past three years a reliable benchmark of assessing how far the U.S. is willing to go to check China's rising assertiveness in the South China Sea.”

However, Swift told reporters that he was “not surprised” that FONOPs have not occurred while the Trump administration “determines where would be appropriate to take advantage of these opportunities and where we may want to wait.” Swift said that “FONOPs would be one way to reduce [the] sense of uncertainty” about the United States’ role in Asian maritime security, but added that, in his view, regional “angst” would not be dispelled even “if the entire United States Navy was forward deployed to the western Pacific.” Shortly after Swift’s statement, a bipartisan group of U.S. Senators – four Democrats and three Republicans – wrote to President Trump, asking that he take a harder line with China in the South China Sea, including an increase in FONOPs.

Meanwhile, the United States Ambassador to the Philippines, Sung Kim, reasserted Washington’s insistence on the principle of freedom of navigation in the South China Sea. Speaking to reporters, Kim said, “Freedom of navigation and freedom of flight…are very fundamental rights not just strategically but in protecting the flow of international trade…so our position has not changed.”

Whatever plans to conduct FONOPs the U.S. may or may not have, China’s naval activities in the South China Sea continue without pause. On Monday, the Japanese Coast Guard reported that China Coast Guard ships entered Japanese waters in the East China Sea near the disputed Senkaku/Diaoyu Islands. NHK reported that the Japanese Foreign Ministry filed a complaint with the Chinse government regarding the incursion, the twelfth of the year in Japanese waters. Meanwhile, Philippine Major General Felimon Santos Jr. reported to the Philippine House Committee on National Defense that China’s naval operations in the South China Sea and Philippine Sea have been “intensifying,” with Chinese vessels repeatedly spotted near or within Philippine waters.

Additionally, China’s State Oceanic Administration reported that the China Coast Guard’s CCG 3901, the world’s largest coast guard vessel, has completed its first patrol exercise in the South China Sea. According to the report, the ship patrolled and visited over a dozen Chinese-held islands. Beneath the surface, a Chinese submersible, named “Jiaolong,” has conducted surveying, sampling, and other data-gathering activities on the seabed of the South China Sea. Meanwhile, the China Daily reported that the Chinese air force was working to improve pilot training by making combat exercises more realistic and less predictable.

Senior Associate Justice Antonio Carpio of the Philippine Supreme Court launched a book that challenges the legality of China’s territorial claims in the South China Sea. The book, titled “The South China Sea Dispute: Philippine Sovereign Rights and Jurisdiction in the West Philippine Sea,” can be downloaded in English, but will be made available in Mandarin, Vietnamese, Bahasa, Japanese, and Spanish. Justice Carpio said that the book will be available for free online, partially to avoid Chinese censorship. “This book in its printed form can never be distributed in China. It will be banned,” Justice Carpio said. “The only way this ebook can reach the Chinese people is in electronic format through the Internet.” However, Justice Carpio said that the primary audience for the book would be the Filipino people.

The book launch came as incoming Foreign Affairs Secretary Alan Peter Cayetano announced that the Philippines and China would begin a series of bilateral talks about the status of the South China Sea later this month. Cayetano said that, among other things, the talks would cover the territorial claims of both sides, and the development of a bilateral Code of Conduct.

Meanwhile, the Philippine Navy has started to deliver construction supplies to Pagasa Island for use in improving civilian and military facilities. The construction represents a scaled-back version of President Duterte’s order, given in mid-April, that Philippine soldiers would occupy the Spratly Islands.

Chinese officials are denying rumors, first reported by Japan-based Kyodo News, that China’s Ambassador to the United States asked President Trump to fire Admiral Harry Harris, the head of the U.S. Pacific Command. Admiral Harris has long advocated that the U.S. take a hard line against China in the South China Sea. Counselor Fang Hong, the spokeswoman for the Chinese Embassy in Washington, called the report “sheer fabrication.”

China’s Vice Foreign Minister Liu Zhenmin said that Vietnam and China has “very positive” talks on Thursday regarding sovereignty issues in the South China Sea. “I think that talking about the South China Sea this time is really a positive piece of news. Neither side raised any criticisms of each other. There were no voices of that were out of step,” Liu said.

Japan continues to step up its military cooperation with other countries in the South China Sea in an effort to counterbalance Chinese assertiveness. Tokyo announced plans to donate several retired patrol aircraft to Malaysia, and the Japanese Parliament is debating a policy of enabling the nation to make this – and other – transfers of military equipment at no cost to the recipient.

China’s Co-Consul General to Penang, Wu Jun, stated that three Chinese warships will call at Penang next week. “This is a very historic and proud moment for both China and Malaysia as it also signifies a good relationship between our naval forces,” said Wu. He added that the visit was part of a long-standing plan by China to improve ties with other countries in the region, including Malaysia.

On Saturday, the Taiwanese Coast Guard detained several Chinese fishermen off the southeastern coast of Taiwan, accusing them of trespassing in Taiwanese waters. An Fengshan, a mainland Chinese spokesperson, said that “Taiwan should respect the rights of mainland fishermen and stop seizing fishing boats for no sound reasons.”

Much of this week’s commentary focused on the recent ASEAN Summit, which concluded last week. Writing in Singapore’s Today, Dr. Tang Siew Mun, Head of the ASEAN Studies Centre at the Institute of Southeast Asian Studies, criticized Manila’s accommodation of China’s aggressiveness in the South China Sea. He said that the Philippines’ failure to use strong language to condemn Beijing was a disappointing departure from past precedent, particularly when “the Philippines was expected to do right by ASEAN” by “holding its ground” against China. Dr. Huong Le Thu, a visiting fellow at the Strategic and Defense Studies Centre of Australian National University, blamed ASEAN’s failure to take a more assertive stance on several factors, ranging from a perception that President Trump is not interested in Southeast Asia, to a lack of strategic consensus among the ASEAN countries as to the proper role of the organization. Cary Huang, writing in the South China Morning Post, emphasized China’s economic leverage over the ASEAN countries.

Gregory Poling, writing for the Asia Maritime Transparency Initiative, argues that the United States must take a more assertive stance to defend the rule of law in the South China Sea. He argues that China’s new and expanded bases on the Spratly Islands and Paracel Islands, combined with an aggressive (if vague) South China Sea policy, has given Beijing an upper hand against the United States, which lacks both commitment and vision. Mark Valencia, however, criticizes Poling in the South China Sea Morning Post for conflating Washington’s strategic interests with those of the ASEAN nations, which may significantly diverge.

Nicholas Lyall of the Australian National University warns that China must carefully avoid overreach in the South China Sea. He points to President Xi’s ability to pursue two-track diplomacy with several countries, such as the Philippines – that is, improving economic ties in spite of ongoing territorial disputes—as a key element of China’s success to date. However, Lyall states that President Xi’s strategy could backfire if he pushes too hard – for instance, by constructing bases on the Scarborough Shoal.

Jared Dummitt is a second-year student at Harvard Law School. Prior to law school, he worked as a legal analyst in the New York and Hong Kong offices of Kobre & Kim LLP, a U.S. law firm. He graduated from the University of Chicago with a B.A. in 2013.
More Articles
Published by the Lawfare Institute in Cooperation With