Reacting to Donald Trump's moves in the Asia-Pacific 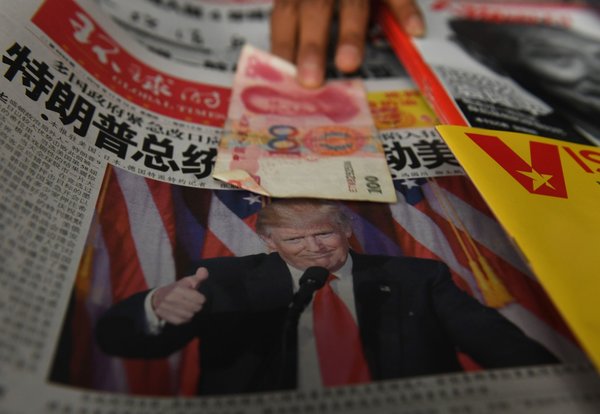 President-elect Donald Trump took control of the news cycle this week by seeming to adopt a hard line on US-China relations. First, he accepted a phone call from Taiwanese President Tsai Ing-wen last Friday, breaking decades of diplomatic protocol. Reports later in the week indicated that Bob Dole, prior Republican presidential nominee and key Trump ally, set up the call. Read here for more on the Trump-Tsai conversation and Chinese sensitivity to official diplomatic contact between Washington and Taipei. Two days after significant blowback from US media stemming from the call, Trump wrote a series of tweets highly critical of China. He rhetorically queried whether China “ask[ed] us if it was OK to devalue their currency . . . , heavily tax our products going into their country . . . or to build a massive military complex in the middle of the South China Sea? I don’t think so!”

While many corners of the US foreign policy establishment criticized both diplomatic moves, we have seen a diversity of reactions in Taipei and Beijing. Tsai told reporters that, “one phone call does not mean a policy shift”. This after Chinese Foreign Minister Wang Yi shifted blame for the call onto Taiwan, stating that Tsai would not be able to change the “Once China” policy. Foreign Ministry Spokesperson Lu Kang was more forthright, stating that “the US side, President-elect Trump’s team included, is also fully aware of China’s solemn attitude on the issue,” and that “solemn representations” were made to Washington officials. Responding to the tweets, Spokesperson Lu said that, “we will not speculate on what motivates President-elect Trump and his team into taking certain moves,” but that “for many years China-US economic and trade relations have been highly mutually beneficial.”

A number of influential Chinese academics exhibited less equanimity. Prof. Shen Dingli said that, “if [Trump] continues to call Taiwan a country we [should] sever relations with him.” Prof. Shi Yinhong believed that the tweets show that “a large part of Chinese international scholars and even maybe many officials” were “too optimistic” in “their previous estimates of Trump’s disposition and his China policy.” Beijing-backed newspapers were equally critical. A Global Times editorial called the phone call “jaw-dropping” and recommended that China “punish the Tsai administration, as a way to convey a message to Trump.” A People’s Daily editorial warned that though this week’s actions would not change US-China relations, they could have troubling implications if they represent the beginning of a more hardline stance against Beijing. A China Daily piece said that though Trump could “expect some forgiveness even when he is shooting from the hip” as President-elect, “things will be different when he comes president.” Another Global Times editorial opined that, “Sino-US ties will witness more troubles in his early time in the White House than any other predecessor.” Mindful that increased tensions are likely, one academic recommended that Beijing not try to set rules for Trump, noting that “the more rules we set for him, the more unruly he becomes. Trump focuses on style over substance, and we don’t need to play his games.” Chinese social media featured a similarly diverse range of opinions. Whatever Trump may have intended, Politico reports that a harder line against China “is in line with GOP thinking.”

President-elect Trump was busy on other Asia-Pacific fronts this week. In what was described as a “very engaging, animated” conversation, Trump invited Philippines President Rodrigo Duterte to visit Washington in 2017. Duterte told reporters that Trump also endorsed his antidrug campaign, which the Obama administration, United Nations, European Union and other have condemned for human rights violations. Notwithstanding this bonhomie, Defense Secretary Delfin Lorenzana said that the Philippines was “unlikely” to host US ships and aircraft patrolling the South China Sea “to avoid any provocative actions that can escalate tensions.” Duterte has been highly critical of defense cooperation with Washington since assuming office.

Trump announced that Iowa Governor Terry Branstad would be his administration’s nominee for Ambassador to China. Branstad is known for having a personal relationship with Chinese President Xi Jinping. For more on Governor Branstad, see this post from earlier in the week. In other news, Chief of Naval Operations Admiral John Richardson told Reuters that Trump’s plan to expand the Navy’s fleet would be “remarkably easy” as long as there is sufficient funding.

Senator Marco Rubio has introduced a bill (full text here) that would sanction Chinese individuals and entities “that participate in Beijing’s illegitimate operations in the South China Sea and East China Sea.” Senator Rubio asserted that “Beijing’s illegitimate activities in these waters need to end, and the sanctions called for in this legislation would hold violators accountable and serve as a deterrent to others.” For insight into what this might mean for the South China Sea, see Ankit Panda’s analysis at The Diplomat.

Finally, Defense Secretary Ash Carter arrived in Japan on Monday, where he reaffirmed that “our alliance with Japan has never been stronger” and that he was “satisfied” with Japan’s contributions to the alliance. Trump has criticized Japan’s financial contributions to the US defense umbrella, notwithstanding that some analysts assess argue Japanese contributions make it cheaper to keep troops in Japan than in the United States. Japanese Prime Minister Shinzo Abe was the first foreign leader to meet Trump in person. After the meeting Abe said he was “convinced that President-elect Trump is a leader we can trust.”

The People’s Daily reports that China has built new infrastructure and facilities on Fiery Cross Reef and other South China Sea features to “improve the quality of life” of soldiers. Three days after the announcement a China Military editorial restated Beijing’s position that Chinese bases are essential for conducting search and rescue operations and provide “public goods for the region and global navigation.” The editorial also cited Prof. Jin Canrong, who stated that “When the US sends their warships to scare us, we just fill in one or two more islands to make ourselves calm down.” In a similar vein, Foreign Minister Wang Yi hailed warmer ties between Beijing and Manila as marking “the return of the South China Sea issue to the correct track of resolution via dialogue and consultation.” He went on to assert that, “conspiracies of relevant countries to use the South China Sea issue to disorder the region have been thoroughly broken.”

Representatives from India, China, and Russia met on Thursday for a first round of consultations on regional security architecture, coordination within multilateral for a, anti-terrorism, and other regional issues.

Vietnam continues to make waves by developing its military assets in the South China Sea. Last month analysis from Asia Maritime Transparency Initiative showed that Hanoi is upgrading its only runway in these disputed waters. This week, satellite imagery from Planet Labs revealed that dredging work has begun on a Vietnamese-occupied Ladd Reef. At the southwestern fringe of the Spratlys, Ladd Reef has a small contingent of Vietnamese soldiers and a lighthouse. It is submerged at high tide. Hanoi has not clarified what is being built.

In other news, India has agreed to train Vietnamese fighter pilots on how to use Sukhoi-30MKI fighter jets starting in 2017. This follows on Indian Prime Minister Modi’s visit to Hanoi in September, when both sides agreed to “elevate” their relationship to a “comprehensive strategic partnership.”

London made its mark in the region this week as Kim Darroch, Ambassador to the United States, said that British fighter planes would fly over the South China Sea en route to Japan. Darroch also told reporters that the UK will sail aircraft carriers in the Pacific once they are operational in 2020 given concerns about freedom of navigation. An editorial from Xinhua warned that a British freedom of navigation mission “would only serve to further complicate the issue and weight on thriving China-Britain ties.” Chinese Foreign Ministry Spokesperson Geng Shuang struck a more cautious note, saying that, “it is agreed that all countries are entitled to sail and fly freely through the South China Sea” and that “the situation in the South China Sea is also getting better.”

Philippine Coast Guard Spokesperson Commander Armand Balilo thanked his Chinese counterpart for rescuing two Filipino fishermen found after their boat capsized near Scarborough Shoal. Presidential Communications Office Secretary Martin Andanar told reporters that, “this act demonstrates that the Philippines-China relationship is now back on friendly footing” and that “we expect the ties between the two countries to further improve in the years ahead.”

Once again, four Chinese Coast Guard ships entered territorial waters surrounding the Japanese-controlled Senkaku/Diaoyu Islands. This is the 34th time that Chinese government vessels have entered these waters this year and follows a flight by Chinese fighters and bombers through the Strait of Miyako two weeks ago. Notwithstanding this kerfuffle, China and Japan held their sixth round of maritime consultations this week. Prashanth Parameswaran has a good overview of these consultations over at The Diplomat.

And finally, Prime Minister Abe announced that he will visit Pearl Habor this month, becoming the first Japanese Prime Minister to visit the memorial with a US President.

The President-elect continues to attract attention for the impact he may have on relations across the Asia-Pacific. Ankit Panda at The Diplomat argues that Trump’s comments may empower Chinese military hawks to take a more strident position in the South China Sea. Former Philippine Foreign Affairs Secretary Albert del Rosario, however, was encouraged by Trump’s focus on the South China Sea because it shows that “he appreciates that this is a crucial regional security issue.” Nick Frisch at The New Yorker has a wonderful in-depth look on President Tsai Ing-wen and possible motivations for her call with Donald Trump. Benjamin Schreer at The Strategist ponders what the call should mean for Canberra’s strategic thinking. Finally, Malcolm Cook at The Interpreter warns against overreacting to this “brief congratulatory call.”

Scholars continue to muse on the future of China-Singapore relations as the island nation’s troop carriers remain mired in Hong Kong Customs. Du Jifeng at the Global Times argues that Singapore will continue to be reliant on Washington as a security partner in the years ahead. Han Fook Kwang at The Straits Times urges policymakers to chart a new China policy given changes Beijing’s vociferous opposition to Singapore’s South China Sea policy. For a more high-level overview of the current crisis, see Bernard Loo’s explainer at CSIS.

Finally, three pieces argue that strategic conflicts in the South China Sea are worsening. Peter Layton at Real Clear Defense walks through the more general challenges in store for the region. Ali Wyne at The National Interest finds that “recent developments are weakening the delicate balance that has helped circumscribe strategic competition between the United States and China in the Asia-Pacific.” Finally, Ralph Jennings at Forces argues that Duterte’s proposal to create a marine sanctuary at Scarborough Shoal may actually reignite conflicts over the disputed reef.