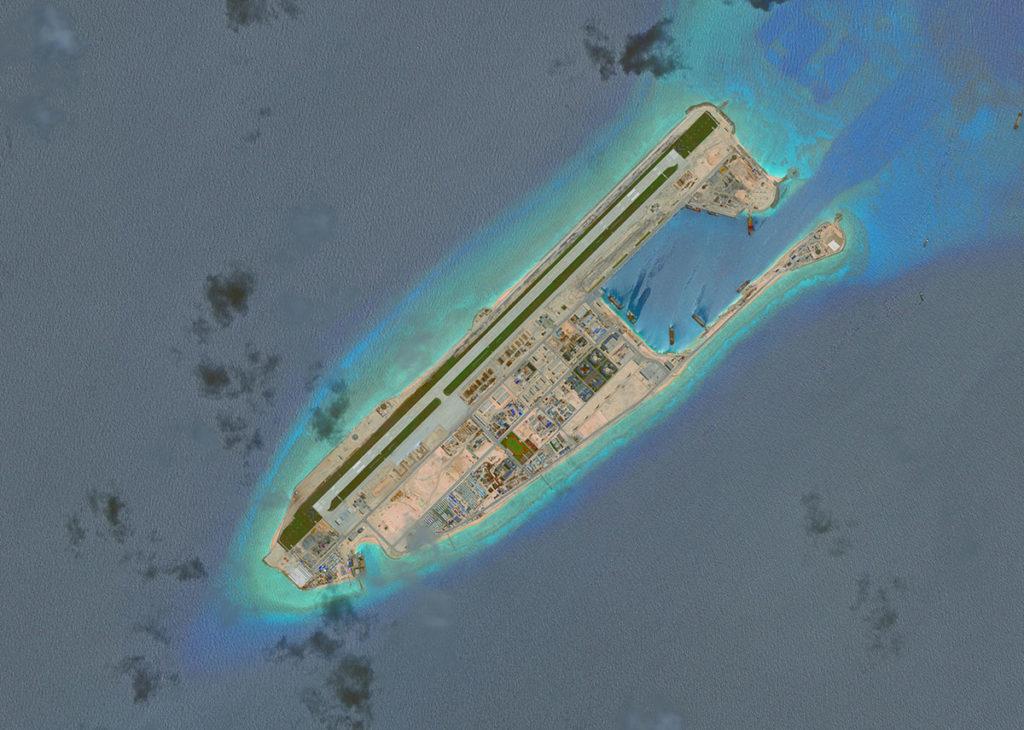 Amid reports that construction on key Chinese-held reefs and islands is nearing completion, Chinese officials stated that the installations were for primarily civilian purposes, and suggested that coastal Asian nations should cooperate to realize their mutual interests.

At a press conference with Australian Prime Minister Malcolm Turnbull, Chinese Premier Li Keqiang asserted that China “never had any intention” to militarize the South China Sea. His comments echo Chinese President Xi Jinping’s promise in 2015 not to militarize the islands and reefs under Chinese control. Li said that Chinese installations were “primarily for civilian purposes,” and that, “even if there is a certain amount of defense equipment or facilities, it is for maintaining the freedom of navigation and overflight in the South China Sea.”

Li’s comments came shortly before the Asia Maritime Transparency Initiative (AMTI), a U.S. think tank, reported that Chinese construction of “military and dual-use infrastructure” on Subi, Mischief, and Fiery Cross Reefs is nearing completion. The AMTI report stated that the installations would allow China to operate military aircraft and radar throughout nearly the entire South China Sea. When asked about the AMTI report, Foreign Ministry Spokesperson Hua Chunying stated that China’s construction projects “on its own territory” aimed to improve the lives of people living on the islands, to enable the islands and reefs to perform “civil and public services,” and to allow China to fulfill her international obligations. Moreover, deploying “necessary national defense facilities” on the islands and reefs would be “within the scope of China’s sovereignty.”

Speaking at a symposium on the South China Sea, Chinese Vice Foreign Minister Liu Zhenmin proposed that the coastal countries of the South China Sea should establish a cooperation mechanism to enhance mutual trust, strengthen cooperation, and shared interests. The mechanism would not aim to resolve disputes between parties, but rather to find areas where pragmatic progress would be possible. Liu said that these areas might include navigational safety, disaster prevention and management, and scientific issues including environmental protection, biodiversity, and research. Liu stated that the mechanism would respect each country’s sovereignty, and that it would complement already-existing bilateral and multilateral agreements between China and the member states of the Association of Southeast Asian Nations (ASEAN).

Foreign Ministry Spokesperson Hua Chunying offered further details about the proposal at a subsequent press conference. She said that the littoral countries of the South China Sea should work together, “without prejudice to the parties’ respective claims…to initiate and establish a relevant cooperation framework.” She explained that “the situation in the South China Sea has been cooling down,” with countries returning to a mindset of “negotiation and consultation.” She also stated that the mechanism would be supported by the United Nation Convention of the Law of the Sea (UNCLOS), which encourages countries bordering semi-enclosed seas to cooperate “in the exercise of their rights and in the performance of their duties under UNCLOS.” Quoting a Chinese idiom, she said that the cooperation mechanism was “of the right time, in the right place and with the support of the people.”

Japanese Deputy Minister of Internal Affairs and Communications Jiro Akama visited Taiwan on Saturday to chair the opening of a tourism fair in Taipei. Akama became the highest-level government official to visit Taiwan since Japan broke off diplomatic ties with Taiwan in 1972. In a stern response, Chinese Foreign Ministry spokesperson Hua Chunying said the visit “obviously breaches the commitment made by Japan to interacting with Taiwan only at non-governmental and local levels.” Noting that China had lodged an official complaint to Japanese authorities, she warned that Japan “not go further down the wrong path.”

On Monday, Philippine Defense Secretary Delfin Lorenzana stated that Philippine Navy will not conduct maritime patrols with Japanese naval force in the West Philippine Sea. His statement was delivered at a ceremony marking the formal turnover of patrol planes on loan from Japan.

The Philippine Senate resumed hearings on Chinese activities in Benham Rise. This 13 million-hectare underwater plateau was officially recognized in 2012 by the United Nations Commission on the Limit of the Continental Shelf as part of Philippines’s continental shelf. Philippine senators have previously called on President Duerte to secure Benham Rise from foreign incursion. The Chinese Foreign Ministry, dismissing any notion of a dispute, declared that China fully respects Philippines’s maritime rights over Benham Rise.

China and the Philippines have agreed to “discuss issues of mutual concern and promote maritime cooperation and security,” according to Chinese Foreign Ministry spokesperson Hua Chunying. Philippine Department of Foreign Affairs spokesperson Charles Jose characterized the meeting as “a new proposal, a bilateral consultation mechanism specifically on the South China Sea.” Hua also confirmed that the Chinese Coast Guard has extended an invitation to their Philippine counterparts for a delegation visit that will “give impetus for the healthy and steady growth of bilateral relations.”

China is reportedly building a new generation of large amphibious assault ships. The Type 075 vessels are projected to be similar in size to the U.S. Navy’s Wasp-class amphibious ships, and will reportedly have the capacity to carry 30 armed helicopters. A source told the South China Morning Post that the first vessel may launch as early as 2019.

Vietnam condemned these Taiwanese military drills around Itu Aba. The drills, according to Vietnamese Foreign Ministry spokesperson Le Hai Binh, constitute “a serious violation of Vietnam’s sovereignty.” Vietnam is one of the countries that claims the waters around Itu Aba. Le also demanded that China immediately stop sending cruise ships to the Paracel Islands. Earlier this month, a cruise ship carrying more than 300 tourists made its maiden voyage to this disputed island chain in the South China Sea.

Several analysts have described an increasing trend towards the mobilization of non-Navy forces in the South China Sea. Andrew Erickson of the U.S. Naval War College reports that China has been developing a Maritime Militia that has been involved in several incidents with foreign vessels throughout the South China Sea. Erickson says that the Maritime Militia is composed of civilian mariners who are trained, and stand at the ready, to defend China’s maritime territorial claims, or to support the People’s Liberation Army Navy. Meanwhile, Lyle Morris argues that nations of the South China Sea are turning to their coast guards, rather than their navies, as the “asset of choice,” primarily because coast guards may be perceived as less visibly militaristic than naval vessels. Additionally, a nation that chooses to deploy its coast guard may send a message that the waters in question are under its domestic civilian jurisdiction.

Analysts have also continued to react to Rex Tillerson’s recent visit to China. Ankit Panda, writing in the South China Morning Post, says that Tillerson’s use of distinctive Chinese diplomatic phrases should not be interpreted as a deferential shift in U.S. policy towards China. Instead, Panda says that Chinese diplomats would be wise to judge President Trump’s potentially unpredictable policy by his aggressive signals regarding Taiwan, his rhetoric on trade, and his accusations of currency manipulation by China. Douglas Bulloch suggests in Forbes that Tillerson may have been more direct, and less conciliatory, in his private remarks to Chinese officials.

Water Wars is our weekly roundup of the latest news, analysis, and opinions related to ongoing tensions in the South and East China Seas. Please email Sarah Grant with breaking news, relevant documents, or corrections