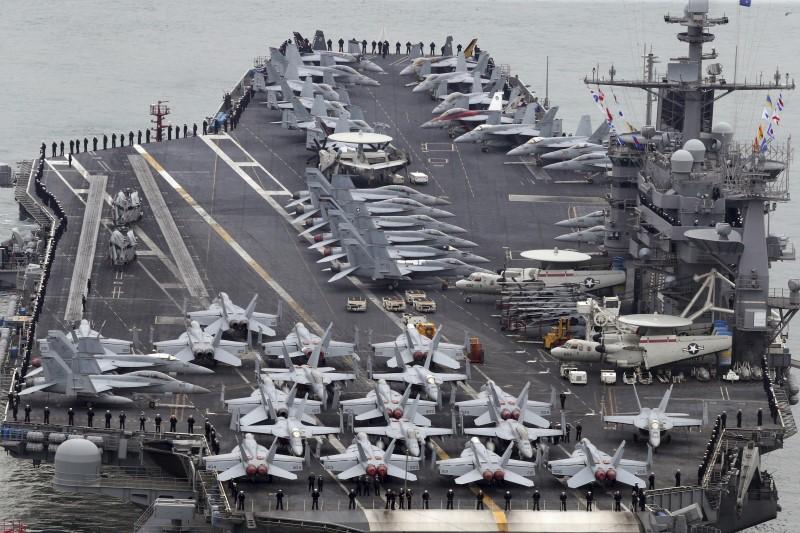 In a widely anticipated visit, U.S. Secretary of Defense Ash Carter sailed aboard the USS Stennis for two hours as the vessel made its way through the South China Sea. Philippine Defense Secretary Voltaire Gazmin accompanied Secretary Carter on the trip. The joint appearance came on the heels of last week’s US-Philippine joint military exercises and newly announced plans to enhance bilateral security cooperation throughout the South China Sea. PRC Foreign Ministry Spokesperson Lu Kang asserted that the visit proved Washington “was the real promoter of the militarization of the South China Sea.” Anticipating this pushback, Secretary Carter noted that, “We have been here for decade upon decade” and that, “Chinese behavior” was the cause of heightened regional tensions.

The PRC, not to be outdone, also announced that Vice-Chairman of the Central Military Commission General Fan Changlong led a contingent of senior military and civilian officials on an inspection tour of Chinese construction in the Spratly Islands. It is unclear when or exactly where in the region this visit took place. General Fan is the most senior Chinese military official known to have visited the disputed islands. A Defense Ministry report of the visit also noted that five lighthouses have been built in the region, four of which are in operation. Deputy Secretary General of the China Council for National Security Policy Studies Peng Guangqian said that the visit was necessary to show “our determination, resolution and capability to protect our nation.”

PRC officials retook control of the news cycle this week after spending much of the past month reacting to a rising tide of discontent in the South and East China Seas. First, the PLA Navy announced that it conducted advanced training drills that resemble actual combat conditions in the South China Sea. It is unclear where these exercises occurred, though they were reported to have started on April 7th.

The Ministry of Defense also confirmed that it tested intercontinental ballistic missiles (ICBMs) on April 12, just ahead of Secretary Carter’s visit to the region. American reports indicate that these ICBMs (road-mobile DF-41 missiles) are part of China’s long-running plan to “re-engineer[] its long-range ballistic missiles to carry multiple nuclear warheads.” The DF-41 was previously tested in August and will be able to reach the United States in 30 minutes. The Ministry of Defense, however, insisted that the experiment “did not target any country.”

Following on civilian flights starting in January, Chinese military aircraft landed on Fiery Cross reef to evacuate three ill construction workers. This is the first time that PRC officials have publicly announced a military landing on the disputed maritime feature. Retired Major General Xu Guangyu argued that the rescue mission “would not have been possible without the expanded naval capacity and facilities built on the island in recent years.” PRC naval analyst Li Jie further said that this “proven capacity” would allow China to expand Fiery Cross reef into a logistics base for forces in the region.

American officials wasted no time in condemning the news. State Department spokesman John Kirby said that it was “difficult to understand” why China needed military aircraft for the evacuation. Department of Defense spokesman Commander Gary Ross also urged “China to reaffirm that it has no plans to deploy or rotate military aircraft at its outposts in the Spratlys.” PRC Foreign Ministry Spokesperson Lu Kang, however, said that the landing was “nothing to be surprised at on Chinese soil” and Spokesperson Hua Chunying asked “why the US used military planes and vessels to advocate navigation freedom, instead of civilian ones.” A Ministry of Defense press release further asserted that American concerns were both “irrational and merciless.”

A Beijing-bound trade delegation led by New Zealand Prime Minister Key also became contentious after a Xinhua editorial (now deleted) said that any attempt by Prime Minister Key to take sides on the South China Sea “would risk complicating . . . flourishing trade ties.” The Prime Minister, undeterred, said that the issue would “get raised in terms of the overall discussion.” PRC Foreign Ministry Spokesperson Hua Chunying also condemned UK Foreign and Commonwealth Minister Hugo Swire’s statement that any arbitral decision should be binding on both China and the Philippines.

Finally, President Xi Jinping picked up a new title, Commander in Chief, this past week as he inspected the newly established Central Military Commission Joint Battle Command Center. This new command center is part of an effort, announced in February, to centralize and regroup China’s military structure into five theater commands. President Xi is also Chairman of the Central Military Commission.

Aside from Secretary Carter’s visit to the South China Sea, there were few other big stories this week. American warplanes arrived in the Philippines as part of a bilateral deal, announced a month ago, to reintroduce a permanent presence at Philippine military bases. Warplanes may be the least of China’s concerns, however, if the United States’ recently announced plans to develop undersea drones indeed yield enhanced force projection in disputed waters.

Despite some bonhomie after President Xi expressed his condolences for Japan’s loss in this week’s earthquakes, relations remained strained as Japan released its 2016 Diplomatic Bluebook. This annual foreign policy report called for increased international cooperation to ensure freedom of navigation and prevent China for unilaterally changing the status quo. PRC Foreign Ministry Spokesperson Hua Chunying criticized a related Japanese report claiming to show evidence of its sovereignty over the Senkaku/Diaoyu Islands. Spokesperson Hua condemned the report for “picking up some information here and garbling some documents there,” and creating a “distorted history.”

Outgoing President Ma Ying-jeou, perhaps aware that the tribunal is expected to release a decision in the China/Philippines arbitration in May or June, reiterated that any resolution finding that Taiping Island (Itu Aba) is a “rock” would be illegal. In addition, Taiwan led another delegation of international law experts to Itu Aba, inviting them to drink water from a well and lunch on vegetables and chickens raised on the island. The trip was specifically designed to refute Manila’s contention that the island is merely a rock.

On the heels of last week’s visit to Beijing, Prime Minister Turnbull urged Chinese Premier Li Keqiang to show restraint in the South China Sea. Former Prime Minister Howard also sought to tamp down heightened tensions, saying that, “conflict between the United States and China was feared on numerous occasions, yet it did not eventuate.”

Ambassador Philip Goldberg announced that the United States will transfer an observational blimp to the Philippines as a part of a $425 million initiative to enhance the military capacity of Southeast Asian partners. In total the Philippines will receive $42 million of sensors, radar, and communications equipment.

A light news cycle made for a great week of analysis. First, a torrent of new websites brings together the best and brightest for up-to-the-minute analysis of key issues in South and East China Seas. The most expansive is China Power at CSIS, a new site devoted to unpacking all aspects of Chinese power through dynamic data visualization. The Maritime Awareness Project is a similarly robust new platform with detailed information on maritime issues. AMTI also produced another great overview of maritime conflicts, this time focusing on claims in the East China Sea. The Council on Foreign Relations released a complementary interactive report on China’s maritime disputes more generally. And if all that wasn’t enough, you can enjoy photos of Chinese construction in the Spratly Islands courtesy of Thanh Nien Online.

A trio of posts took a critical look at how the Southeast Asian balance of power should change to deal with emergent security challenges. Robert Manning and Jim Przystup at East Asia Forum, responding to a contrary piece by Hugh White, argue that the current order is equipped to deal with significant strategic conflict. Meicen Sun, Daryl Morini, and J. Berkshire Miller, focusing on Southeast Asia, present a detailed list of proposals for improving ASEAN’s approach to preventative diplomacy. Shubhra Bhargava at Mainstream Weekly goes even further, finding insights into how ASEAN might be reformed by examining why it was first established.

Analysts continued to critique the Obama administration on its handling of the South and East China Seas. Ashley Towshend at The Interpreter explores the strategic implications of contradictory policy preferences out of the White House and Pacific Command. Robert Farley takes a broader perspective at The Diplomat, arguing that the administration should focus on leveraging Chinese aggression to develop partnerships in the region. Jennifer Harris at The Huffington Post takes an entirely different tack, finding that the United States has neglected economic power in its competition with China. Finally, Bill Gertz at Asia Times writes that the Obama administration is sending mixed signals by allowing China to participate in RIMPAC.

The Obama administration, however, was not the only government under scrutiny. Envall, at East Asia Forum, Stephan Fruehling, at The Interpreter, and Hugh White, at The Age, all took a stand on the strategic implications of Australia purchasing a new submarine fleet from Japan. Tiola Javadi, at The National Interest, takes a hard look at Indonesia’s response to the Natuna Incident and what he dubs “flexible hedging.” The unparalleled Jerome Cohen looks ahead, considering how important stakeholders in the South China Sea might react to an arbitral decision that is unfavorable to China. For a longer analysis on the same topic, see Mira Rapp-Hooper and Harry Krejsa’s report out of CNAS.

We also have another set of great articles analyzing China’s maritime militia and the government’s strategic use of civilian fishing fleets. Join Andrew Erickson and Conor Kennedy of the Naval War College for a deep dive on how China’s maritime militia played a key role in the April 2012 Scarborough Shoal incident. The Economist and Straits Times also take a look at why Chinese fishermen keep getting arrested and how they are used to support China’s sovereignty claims. For a broader look at China’s understanding of its role in regional and global governance, follow Mira Rapp-Hooper and Richard Fontaine’s piece in The National Interest.

Finally, two great, but unrelated, articles: Mainland Chinese experts argue why stronger US alliances in the South China Sea will push the PLA to quicken land reclamation and military buildup. And the US-China Economic and Security Review Commission releases a staff report on the environmental damage caused by Chinese land reclamation.