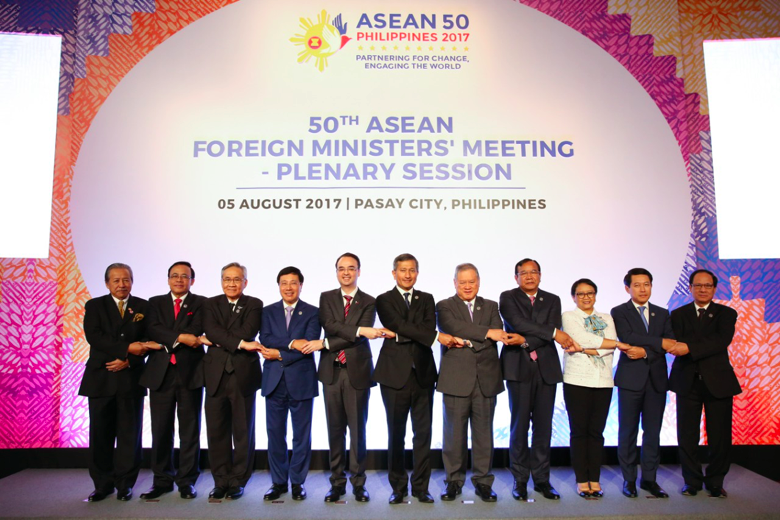 ASEAN and China took a step forward last week in their long quest for a Code of Conduct on the South China Sea, while the People’s Liberation Army flexed its muscles on its 90th anniversary.

Foreign ministers from Southeast Asia and more than a dozen other countries gathered in Manila over the weekend for the ASEAN foreign ministers’ meeting on Saturday and the ASEAN Regional Forum on Monday. On Saturday, the foreign ministers of the 10 ASEAN member states and China formally endorsed a framework Code of Conduct (COC) for the South China Sea. Representatives of the 10 ASEAN member states and China agreed on this framework in May, but the text was not released then. In a sign of behind-the-scenes discontent, however, the parties were unable to release a joint statement Saturday as originally scheduled. Part of the reason for the delay is reportedly Vietnam's insistence that ASEAN take a stronger stance against Chinese expansionism in the South China Sea.

One of the major questions surrounding the framework Code of Conduct is how it handles last year’s UNCLOS arbitral tribunal decision on the South China Sea. According to Philippines Department of Foreign Affairs spokesperson Robespierre Bolivar, the framework is likely to contain “no specific mention” of the tribunal decision because it is only an outline. Bolivar noted that the arbitral tribunal could be raised during negotiations on the code, which would begin after the foreign ministers endorse the framework.

Media outlets that have analyzed leaked versions of the framework characterize it as a diplomatic achievement for China. For example, China has long resisted ASEAN’s push for an agreement that is legally binding, and the framework reportedly does not state whether the code is legally binding. However, the framework states that the Code of Conduct is “not an instrument to settle territorial disputes or delimitation issues,” which would be consistent with China’s preference to resolve these disputes through bilateral negotiations. According to Reuters, the framework also does not call for the parties to commit to the “purpose or principles” of UNCLOS, as opposed to adherence to the treaty, which China and nine of the ASEAN member state have ratified. The exception is Cambodia, which has signed the treaty. The Reuters report also noted that some analysts and ASEAN diplomats are concerned that China’s negotiation of a Code of Conduct is a stalling tactic as it further develops its military capabilities.

Those capabilities were on full display last week as People’s Liberation Army (PLA) celebrated its 90th anniversary. President Xi Jinping traveled to Inner Mongolia to attend a massive military parade on Sunday featuring more than 12,000 soldiers. The PLA used the parade to show off new military hardware, including DF-31AG intercontinental ballistic missiles and J-20 stealth fighters. In his address to the troops, President Xi warned that the PLA had to transform into an elite fighting force because the world is not a peaceful place.

On Tuesday, President Xi continued his commemoration of the anniversary by vowing that the PLA would not tolerate any attempts to harm China’s territorial integrity. Speaking at the Great Hall of the People in Beijing to a gathering of senior government and Communist Party officials, President Xi said China “will never allow any people, organization or political party to split any part of Chinese territory out of the country at any time, in any form.” Xi also noted in his lengthy remarks that the Chinese people love peace and “will never seek aggression or expansion, but we have the confidence to defeat all invasions.”

Meanwhile, President Xi received praise for steering China’s aggressive approach in managing disputes in the East and South China Seas. According to a recent editorial by the Study Times, a leading Communist Party publication, President Xi has “personally made decisions on building islands and consolidating the reefs, [which has] fundamentally changed the strategic situation of the South China Sea.” According to experts, these demonstrations of President Xi’s resolve to protect China’s sovereignty and his control over the PLA are part of a campaign to solidify his standing within the Chinese Community Party before it holds the 19th National Congress meetings later this year. President Xi is widely expected to be chosen at the meetings to serve a second term as general secretary of the party and chairman of the Central Military Commission.

Responding to concerns raised by Japan, Taiwan and other South China Sea nations, China’s air force said that it would continue conducting drills at sea. People’s Liberation Army Air Force spokesperson Shen Jinke said, “The air force’s distant sea training has become normal, systematic, and practical…no matter the obstruction we will carry on just as in the past. No matter who shadows us we will fly open and frequently.”

The United States announced a successful test of its Terminal High Altitude Area Defense (THAAD) system last Sunday. According to the Missile Defense Agency, this was the 15th successful interception of a test target. The test involved a medium-range missile, rather than a long-range missile like the one North Korea tested last month.

In a series of unusually lengthy comments to the press, Secretary of State Rex Tillerson discussed the relationship between the United States and China. His comments mostly involved the North Korea issue; on the South China Sea, Tillerson simply acknowledged that it was an area in which “we have differences.” He will embark on a trip through Southeast Asia on Saturday, traveling to Manila for the ASEAN Regional Forum and making stops in Bangkok and Kuala Lumpur.

Japanese Foreign Minister Fumio Kishida said that Japan had lodged a protest with Beijing regarding China’s development of oil resources along the median line dividing the two countries’ economic zones in the South China Sea. “It is extremely regrettable that China is proceeding with unilateral development in the area, while the boundary between Japan and China in the East China Sea is not yet fixed,” he said. In response, China’s Foreign Ministry said the drilling was taking place in “maritime areas indisputably under Chinese jurisdiction.”

Philippines Supreme Court Senior Justice Antonio Carpio said in an interview that a “joint venture” with China to exploit minerals in the South China Sea—proposed by President Rodrigo Duterte—could violate the Constitution of the Philippines. According to Justice Carpio, the Philippines cannot allow another country to exploit minerals in any area that has been declared part of the exclusive economic zone (EEZ) of the Philippines without violating its Constitution. This rule would apply if other countries act in their capacity as sovereigns; foreign countries could, however, act as contractors to the Philippines in these areas. Justice Carpio said, “The language of the Constitution is explicit that the exclusive economic zone is part of the national territory and that it should be for the enjoyment and exploitation exclusively of Filipinos alone. We cannot enter into joint development within the EEZ.”

Justice Carpio said that the Scarborough Shoal is part of Philippine territory and that the Philippines has sovereign rights under international law to the mineral resources of the Benham Rise, Mischief Reef, Second Thomas Shoal and Reed Bank. If a deal to jointly exploit any of these areas were to go forward, he said, the Philippines “will have to avoid language that implies that we recognize sovereignty of China or sovereign right of China over the areas in the West Philippine Sea.”

Meanwhile, Philippine oil and gas firm PXP Energy Corp has said that it is ready and willing to continue drilling in Reed Bank—probably, according to its chairman, Manuel Pangilinan, with a Chinese partner.

In the wake of last week’s spat over Vietnamese oil exploitation in the South China Sea, Vietnam defended its right to drill for oil, including in Vietnam’s Block 136/3, which lies within the “nine-dash line” of Chinese maritime claims. Vietnamese Foreign Ministry spokesperson Le Thi Thu Hang said on Friday that “Vietnam’s petroleum-related activities take place in the sea entirely under the sovereignty and jurisdiction of Vietnam established in accordance with international law. Vietnam proposes all concerned parties to respect the legitimate rights and interests of Vietnam.” Some analysts believe that the Communist Parties of China and Vietnam will soon hold a meeting to prevent the spat over their countries' mineral rights from escalating further.

Tensions between Vietnam and China flared in another arena this week: Vietnam criticized China’s construction of a cinema on the Paracel Islands, which Vietnam calls the Hoang Sa Archipelago. The movie theater was built on Woody Island, which Vietnam—as well as Taiwan—lays claim to. Woody Island, which China calls "Sansha city," is the seat of China’s operations in the South China Sea. Vietnamese Foreign Ministry spokesperson Le Thi Thu Hang stated, “That action by China has infringed Vietnam’s sovereignty over Hoang Sa Archipelago, violated international law and cannot alter Vietnam’s sovereignty over this archipelago.”

The ASEAN meetings and the framework Code of Conduct was prominently featured in this past week’s commentary. Mark Valencia frames the ASEAN meetings in the context of China’s reported threats to use force against Vietnam in the South China Sea. Writing for The Diplomat, Valencia also describes how China used the negotiations with ASEAN to portray the United States and its allies as “outside parties” that are destabilizing the South China Sea. Prashanth Parameswaran considers whether a Code of Conduct would even be able to restrain China. Parameswaran notes that by the time this framework develops into a final agreement, China may have de facto control of the South China Sea.

The South China Morning Post characterized criticism of a Chinese spy ship that monitored U.S.-Australian exercises from Australia’s EEZ as “reek[ing] of hypocrisy.” The editorial says that the criticism is inconsistent with Australia’s support for U.S. Freedom of Navigation Operations and “close-in surveillance” within China’s EEZ. The editorial went on to suggest that people “should come to terms with the reality that China is a major economic power building up military power to defends its national interests.”

Finally, Bill Hayton argues in Foreign Policy that Vietnam’s decision to shut down its South China Sea drilling operations shows that countries in the region have lost faith in the United States. According to Hayton, the Vietnamese Politburo decided not to call China’s bluff to use force against Vietnam because the Trump administration could not be relied on to support Vietnam in a conflict with China. Hayton acknowledges the point made by Bonnie Glaser that President Obama would not have used the U.S. military to defend Vietnam, but he contends that a combination of strong public statements supporting Vietnam, naval exercises, and back-channel diplomacy could have made China back down.

Water Wars is our weekly roundup of the latest news, analysis and opinions related to ongoing tensions in the South and East China Seas. Please email Sarah Grant with breaking news, relevant documents or corrections.

Eliot Kim is a JD candidate at Harvard Law School. Prior to law school he spent three years living in mainland China, including a year studying international relations at the Hopkins-Nanjing Center. Eliot is currently a member of Harvard's International Commercial Arbitration Moot Court Team and has previously been a research intern at the Congressional-Executive Commission on China.
More Articles

Jared Dummitt is a second-year student at Harvard Law School. Prior to law school, he worked as a legal analyst in the New York and Hong Kong offices of Kobre & Kim LLP, a U.S. law firm. He graduated from the University of Chicago with a B.A. in 2013.
More Articles
Published by the Lawfare Institute in Cooperation With