The US and Vietnam Solidify Bilateral Economic and Security Ties, as China Continues to Press Its Claims in the Region 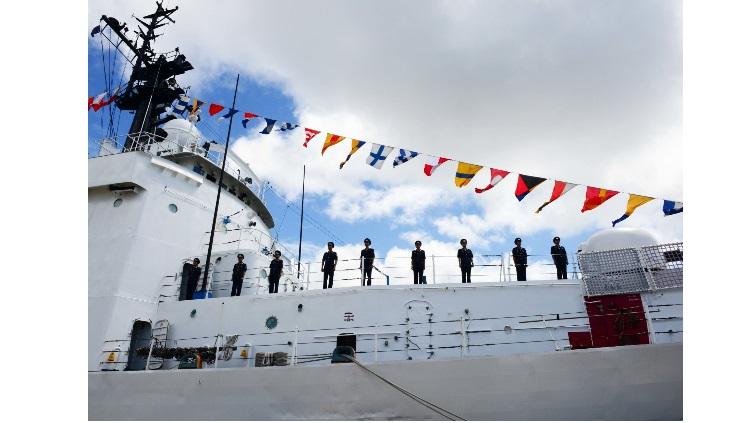 Transfer ceremony of a decommissioned US cutter to the Vietnam Coast Guard on May 25, 2017. Source: US Coast Guard

Two Chinese fighter jets intercepted a U.S. Navy P-3 Orion surveillance plane in international airspace southeast of Hong Kong last Wednesday, less than a week after a similar intercept of a WC-135 Constant Phoenix radiation detection aircraft. A Pentagon official called the maneuvers against the P-3 “unsafe and unprofessional,” a characterization which the Chinese dispute. On Sunday, the Chinese Defense Ministry dismissed the US account as “inconsistent with fact" and accused the U.S. for “infringing upon China’s territorial sovereignty and posing a threat to the lives of people from both sides.” Despite the tensions, the U.S. Navy confirmed on Monday that China has been invited to participate in next year’s Rim of the Pacific (RIMPAC) multilateral exercise and the planning conference later this month.

Speaking on Tuesday at the University of Sydney, Senator John McCain urged the countries of the Asia-Pacific region to stick by the United States despite the turmoil caused by the Trump Administration. He touted the benefits of a rules-based international order and the need for countries of the region to work together and with the United States to defend against China’s bullying tactics, including “asserting vast territorial claims that have no basis in international law.”

Last week, House Armed Services Committee Chairman Mac Thornberry introduced “The Strengthening Security in the Indo-Asia-Pacific Act,” which, if adopted as part of the annual defense authorization bill to be considered later this month, would provide additional funding for “critical military capabilities to deter aggression and respond rapidly to crises” and reinforce relationships with key regional partners and ASEAN. The bill also calls for the United States to maintain a routine program of freedom of navigation operations (FONOPs) in the sea and air and for the Secretary of Defense, in consultation with the Secretary of State, to conduct an assessment of U.S. FONOP policy and submit its findings and recommendations to Congress by the end of September. This bill follows Senator McCain’s proposal from January to commit $7.5 billion of new funding over five years for military training and operations in the Asia-Pacific.

The “Cooperation Afloat Readiness and Training” (CARAT) naval exercise, in its twenty-third iteration, featured a multilateral component for the first time this year. The exercise traditionally has consisted of a series of bilateral engagements between the U.S. Navy and Southeast Asian partners, but CARAT 2017 opened with joint training between the U.S. Navy, Republic of Singapore Navy, and Royal Thai Navy. The trilateral training took place off the coast of Thailand and focused on conventional maritime warfare capabilities like anti-air and anti-surface operations.

The Chinese government approved a 2 billion yuan (US$290 million) plan to build a seabed observation system that will cover the disputed East and South China seas. The project will consist of a network of sensors that provide real-time information about environmental conditions and seabed activities and is slated to be completed in the next five years. Though the roll-out of the plan focused on the civilian usages of the system, include gathering information for disaster prevention and natural resource exploration, there is a significant national security motive as well. As one Chinese military analyst commented, “If foreign submarines and unmanned underwater vehicles enter Chinese waters, China is obligated to use data gathered from the underwater network to identify, detect or even drive away those vehicles to protect the security of China's territorial waters, exclusive economic zones and the country's sovereignty.”

In a joint communiqué issued following a summit in Italy on Saturday, the G7, which includes the United States and Japan, encouraged demilitarization in the East and South China Seas and reaffirmed its commitment “to the peaceful settlement of maritime disputes through diplomatic and legal means, including arbitration.” On Sunday, the Chinese Foreign Ministry rebuked the statement and expressed its strong dissatisfaction with any effort by the countries outside the region to interfere. Spokesman Lu Kang urged the G7 countries to “honor their commitment of not taking sides on relevant disputes, fully respect efforts made by countries within the region to manage disputes, stop making irresponsible remarks and work constructively for regional peace and stability.”

Prime Minister Nguyen Xuan Phuc visited the White House on Wednesday, seeking to secure the gains made during the Obama Administration in the U.S.-Vietnam economic and security relationship. The future of the countries’ trade relationship was of particular concern to Vietnam following President Trump’s decision to withdraw the United States from the Trans-Pacific Partnership, and the meeting between Phuc and Trump resulted in the announcement of commercial deals worth more than $8 billion. On the defense front, the leaders reaffirmed the commitments in the 2013 Comprehensive Partnership and the 2015 Joint Vision Statement on Defense Relations, and explored measures to expand cooperation in maritime security and humanitarian assistance operations. Phuc expressed interest in acquiring more defense equipment from the United States, in addition to the decommissioned Hamilton-class cutter transferred to Vietnam last week and six 45-foot patrol boats delivered earlier in the year, and considered the possibility of a visit to a Vietnamese port by a United States aircraft carrier. The two leaders also discussed the importance of freedom of navigation to peace and prosperity in the Asia–Pacific region, and the United States reiterated its commitment to the U.S.-ASEAN Strategic Partnership and to a rules-based regional architecture.

Former Australian Defense Secretary Dennis Richardson, who retired in May, said last week that he believes Australia should carry out its own FONOPs to contest Chinese claims in the South China Sea. The current senior leadership of the Australian government is split on the matter, with some figures agreeing with Mr. Richardson and others believing that Australia should instead focus on de-escalation and building cooperative relationships.

This week, Andrew Chubb provided a roundup of domestic coverage in China of the United States’s FONOP past Mischief Reef. Based on the government’s official response and the media’s treatment of the operation, he assesses that Beijing is becoming increasingly confident in its handling of such incidents and therefore more comfortable exercising restraint in its response. U.S. FONOPs have so far failed to slow Beijing’s accretion of control over the South China Sea, writes Harry Kazianis in The Week, so the Trump Administration needs to be more aggressive in asserting red lines and providing military support to regional partners like Taiwan and Vietnam. But Hugh White of Australian National University cautions that the United States’ alliances may be more of a net liability than a net benefit in managing relations with Beijing, as they “compel Washington to confront Beijing on its allies’ behalf over issues which are of no intrinsic importance to the US, in order to preserve the credibility of its alliance commitments.”

Several commentators discussed the prospects for the U.S.-Vietnam relationship. In The National Interest, Alexander Vuving urged the United States to take advantage of Vietnam’s strategic location and build an alliance that “can neutralize Chinese primacy in Southeast Asia” and restore the status quo ante that better served the interests of the U.S., Vietnam, and other regional partners. Ambassador Nguyen Thanh Chau, former Permanent Representative of Vietnam to the United Nations, also writing in The National Interest, explained the importance of the countries taking a sustainable and long-term view of the partnership and the need for the United States to show unambiguously that it intends to remain a “resident power” in the region.

The Duterte administration has adopted a noticeably more permissive attitude towards Chinese aggression in the South China Sea, providing more muted responses than its predecessors to Chinese naval encroachment and natural resource exploration. This, according to Jay Batongbacal of the University of the Philippines College of Law, may lead to the Philippines finding “itself steadily sacrificing its ability to secure its maritime interests in order to achieve an illusory peace.”

Finally, Nick Bisley of La Trobe University looks ahead to this weekend’s Shangri-La Dialogue in Singapore, calling the summit a “litmus test of the regional mood.” Expect countries to signal their priorities and take stock of where others, the United States in particular this year, stand, he says, and consider what that portends for the future shape of Asia’s security order.