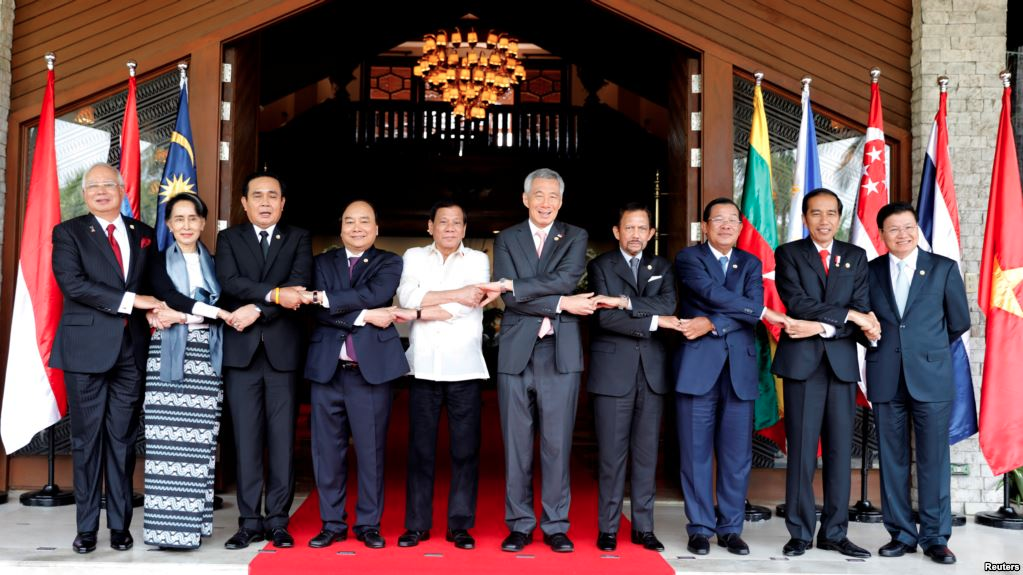 The annual ASEAN Summit wrapped up in Manila on Saturday and the official closing statement captures a wide-ranging discussion, from the progress of the “High-Level Brainstorming Dialogue on Enhancing Complementarities between ASEAN Community Vision 2025 and the UN 2030 Agenda for Sustainable Development,” to the “Agreement on the Establishment of ASEAN Coordinating Centre for Animal Health and Zoonoses,” to the group’s commitment to keeping Southeast Asia free of nuclear weapons. But in what is regarded as a significant victory for China, the statement made no mention of the UNCLOS arbitration ruling last year or of China’s ongoing land reclamation and militarization activities in the South China Sea. Instead, the group merely “took note of concerns expressed by some Leaders over recent developments in the area … [and] recognized the long-term benefits that would be gained from having the South China Sea as a sea of peace, stability and sustainable development.”

This omission, according to a Philippine Department of Foreign Affairs (DFA) official, was due to the fact that “[d]uring the plenary and summit there was no leader that mentioned inclusion or made reference to the land reclamation, militarization and arbitration.” Press reports indicate that specific references to tensions and escalation—mirroring the language of last year’s summit report—were in an earlier, unpublished version but were dropped in final editing. The result was hardly a surprise, given the insistence by Philippine President Rodrigo Duterte that continuing to push the dispute with the Chinese was pointless, but it left many wondering about the Philippines’ long-term strategy in the region. Philippine Trade and Industry Secretary Ramon Lopez described the concession thusly: the Philippines and China “still have differences over the South China Sea. The wisdom is to put this issue aside and talk about business and strengthening economic ties.”

That statement came in response to a question about U.S. Secretary of State Rex Tillerson’s meeting with ASEAN foreign ministers, which took place Thursday and was primarily focused on the threat posed by North Korea. Still, Tillerson took the opportunity to emphatically urge “all parties involved to stop militarization, construction, reclamation of land in the South China Sea while talks are going on,” Patrick Murphy, U.S. Deputy Assistant Secretary of State to East Asia, told reporters afterwards. Notably, however, Murphy declined to say when the U.S. Navy might next conduct freedom of navigation operations to challenge unlawful claims in the South China Sea. It has not yet received permission to do so since the Trump administration took office.

President Trump surprised many (including his own advisors) on Saturday, when during a “very friendly” conversation with Philippine President Duterte, Trump invited Duterte to the White House. American pundits and some human rights advocates were up in arms about the invitation, and they perhaps weren’t alone—China’s President Xi Jinping spoke with Duterte on Wednesday, in what some interpreted as an attempt to counter Trump’s overtures. On Thursday, however, Duterte rebutted these claims, stating that he had initiated the call at Trump’s behest in order to encourage Beijing to take a more active role in the brewing North Korea crisis. Whether Duterte will ultimately accept President Trump’s invitation is uncertain—the Philippine leader told reporters that he “cannot make any promise” as he may too busy.

The administration’s South China Sea strategy remains vague. Governor Terry Branstad, Trump’s nominee for U.S. ambassador to China, faced questioning this week before the Senate Foreign Relations Committee, where he promised to take a “hard line” against Beijing on a range of subjects including North Korea, trade, and the South China Sea. But in response to questioning over his dogged pursuit of Chinese assistance in North Korea, President Trump himself appeared to indicate that trade and the South China Sea dispute would take a backseat to cooperation over North Korea.

Despite Duterte’s busy schedule, he did manage to carry out a visit to three Chinese warships docked in Mindanao this week. The port call is the first for Chinese vessels in the Philippines since 2010, and comes shortly after Russian vessels made a similar visit. During the visit Duterte indicated he was open to joint military exercises between China and the Philippines, a proposal that was met with swift condemnation from domestic political opponents.

Despite the apparent gesture of friendship, during the port call the Chinese ambassador called Philippine plans to improve facilities at Pag-asa Island “illegal.” The Philippines Department of Foreign Affairs responded forcefully, saying, “Any visit or activity we undertake there are part and parcel of our constitutional mandate to ensure the safety, well-being, and livelihood of our citizens living in this municipality.”

After the launch of its second aircraft carrier last week, China continues to make headway in developing advanced military hardware. The Jiaolong seaplane, the world’s largest amphibious aircraft, took another step toward its maiden flight this week, and the country’s fifth-generation stealth fighter has ramped up test flights. The country is expected to develop a carrier-capable version of the fighter, as well as a variant geared to compete against the American F-35 among export-restricted Middle Eastern customers.

The Standing Committee of China’s National People’s Congress this week passed new restrictions on mapping and surveying that seek to “intimidate” foreign entities who might otherwise carry out mapping activities without permission.

Bonnie Glaser of the Center for Strategic and International Studies discusses with Maritime Issues the Trump administration’s evolving policy towards Asia and predicts that regional alliances and partnerships, increasingly focused on military development and cooperation, will likely remain the centerpiece of the U.S. strategy in the region.

Hunter Marston writes on the Lowy Institute’s Interpreter blog that despite concerns about what President Trump might say at this fall’s U.S.-ASEAN Summit, East Asia Summit, and Asia-Pacific Economic Cooperation forum, his attendance alone “will be an essential signal that the U.S. recognizes Southeast Asia's strategic importance” and will “go a long way towards restoring credibility of U.S. staying power in the region.”

Ely Ratner of the Center on Foreign Relations argues that Trump was right to invite Duterte to the White House because despite Duterte’s documented human rights abuses, “my-way-or-the-highway U.S. diplomacy doesn’t work when that highway leads directly to Beijing.” The rebuilding of the U.S.-Philippines alliance is an urgent strategic priority, Ratner says, to ensure that the U.S.’s position in Southeast Asia remains strong and its values influential. Richard Javad Heydarian says that despite Duterte’s efforts to strengthen ties to Beijing, the Philippines is unlikely abandon Washington due in large part to its longstanding military ties to the U.S. On the other hand, Lucio Blanco Pitlo III of Ateneo de Manila University builds a compelling case that behind Duterte’s bluster is a coherent and shrewd foreign policy strategy.

William Choong of the International Institute of Strategic Studies says Trump should draw an Obama-esque “red line” at Scarborough Shoal, due to its strategic importance as one of the three points in the South China Sea’s “strategic triangle,” and Sebastien Roblin argues in The National Interest that while China’s fledgling aircraft carrier program doesn’t come close to matching the U.S.’s maritime might, it’s worth watching. Felix K. Chang of the Foreign Policy Research Institute suggests that China’s pursuit of South China Sea dominance is driven in part by a “nuclear interest.”