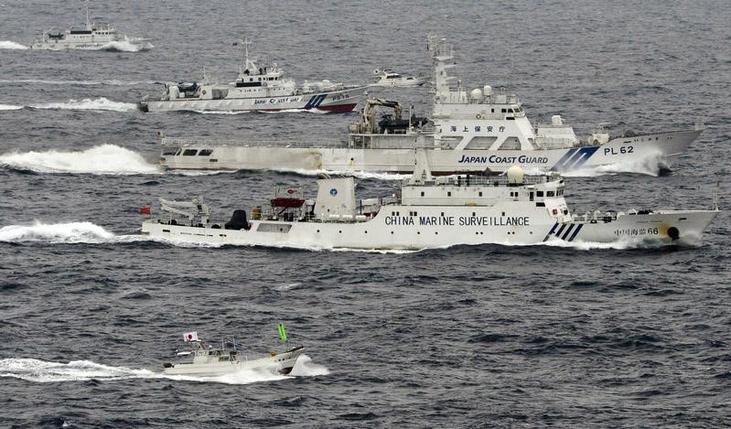 A marathon series of interviews at the conclusion of this year’s legislative session of the National People’s Congress gave PRC officials ample opportunity to opine on the future of Sino-Japanese relations. The consensus: diplomatic gains made in recent years are at risk. For example, after recognizing “signs of improvement in Sino-Japanese ties,” Chinese Premier Li Keqiang suggested that a true rapprochement is “not fully established yet. It is still fragile.” Echoing this sentiment, China’s Ambassador to Japan, Cheng Yonghua, warned that bilateral relations will be imperiled if Japan continues to perceive China as a threat. Mr. Cheng also chastised Tokyo for “fanning the flames,” in the South China Sea and attempting “ to summon some small brothers to contain China.” Other sources of tension include maritime disputes between the two Asian powers in the East China Sea and the sufficiency of Japan’s atonement for its wartime history.

For its part, Tokyo seems similarly circumspect about prospects for a harmonious future. This Wednesday, the Liberal Democratic Party of Prime Minister Shinzo Abe passed a resolution urging the government to consider bringing an arbitral claim against China over its drilling in the East China Sea, unless the two sides can overcome stalled talks and reach a “prompt resolution.” Similarly, Japan’s Foreign Ministry ratcheted up pressure on the South China Sea in an annual report on foreign aid, both by reiterating Tokyo’s commitment to ASEAN countries and stressing the importance of efforts to ensure the freedom and safety of sea-lanes in the region. The Ministry also published a video that not so subtly criticizes recent “attempts to unilaterally change the status quo at sea,” while also extolling Japan’s maritime cooperation with the Philippines, Malaysia, Indonesia, and Vietnam.

On a positive note, Beijing and Tokyo have at last agreed on a visit by the Japanese Foreign Minister to China. Japanese officials had all but given up hope for a meeting three weeks ago after criticism of PRC land-reclamation efforts touched a raw nerve. This will be the first meeting between high-level officials since the two sides agreeing to restart talks in November. All things considered, Foreign Ministers Wang and Kishida will have much to discuss when they meet in early April.

In a speech at Australian National University, U.S. Pacific Fleet Commander Admiral Swift decried what he views as “unprecedented examples of aggressive construction and militarization on disputed land features [in the Asia Pacific] as well as legal appeals to historic pasts that are inconsistent with international law.” The Admiral attributed regional anxieties to the “disproportionate scope, scale and acceleration of the[se] disruptive activities” and to the “lack of transparency about the intentions of some regional navies, coast guards and para-military forces under their command.” Expanding on these familiar arguments, Admiral Swift also noted how rising tension may negatively impact regional economic growth. In closing, Admiral Swift urged states to abandon “might-makes-right” and return to the post-war rules based international system.

On the opposite side of the globe, Admiral John Richardson suggested that understanding the “risk calculus” during freedom of navigation operations is the key to avoiding a direct naval conflict. He also assured attendees at the Future of War Conference that the likelihood of hostilities in the South China Sea remains low, especially given the robust “preplanned responses for . . . unplanned encounters at sea.” Nevertheless, Admiral Richardson expressed concern that recent Chinese activity around Mischief Reef might presage more land reclamation, as well as the possible declaration of an EEZ in advance of the merits decision in the Philippines v. PRC maritime arbitration.

The wires were busy this week with a number of disparate reports out of China. In his annual report to the National People’s Congress, PRC Chief Justice Zhou Qiang announced that China’s judiciary would “improve the work of maritime courts and build an international maritime judicial center” as part of an effort to make his country a “maritime power.” The Chief Justice also implied that the jurisdiction of China’s domestic courts extends to at least some of the disputed features in the Asia Pacific, citing a 2014 case that involved a collision between a Chinese trawler and Panamanian cargo ship in the East China Sea as proof.

Wang Hong, chief of the State Oceanic Administration, told reporters that China began construction on a tsunami alert center at an undisclosed location in the South China Sea. Elsewhere in the disputed waters, Beijing launched a construction project that includes both land reclamation around North and South Islands in the Paracel chain and the eventual linking of the new landmass to Woody Island by bridge.

In a marked change of tone, Premier Li Keqiang said that China was comfortable with an American presence in the region, adding that Beijing will “engage in cooperation with [all regional powers] in the Asia-Pacific and manage well our differences.” Premier Li also rejected accusations that China has militarized the South China Sea by building airstrips on reclaimed land.

On Monday, Malaysian Defense Minister Hishammuddin Hussein revealed his diplomatic efforts to develop a regional bulwark against PRC aggression in the South China Sea. He explained, “If the reports we’ve received from various sources regarding the buildup and placement of military assets in the Spratlys are true – this forces us in a pushback against China.” Mr. Hussein announced plans to meet with Australia’s defense minister next week and to hold future talks with Vietnamese and Philippine officials. Summarizing his goal, he said that regional states must “maintain balance, and to curb the actions by superpowers, whether it is China or the United States.” Providing additional analysis over at The Diplomat, Prashanth Parameswaran cautions that this statement should be understood narrowly as another small step in Malaysia’s incremental policy of recalibration in the South China Sea.

With Filipinos heading to the polls this May to elect a new president, the South China Sea has dominated foreign policy debates among the main contenders for the high office. This week, for example, candidates weighed in on Manila’s denunciation of China’s “provocative” plans to begin regular civilian flights to the Paracel Islands within the year. Meanwhile, Department of Foreign Affairs spokesperson Charles Jose announced that the Philippines is studying whether to file a diplomatic protest over the incident.

Ex-Foreign Minister Alberto del Rosario had a lot to say this week about how his country should handle South China Sea issues now that his resignation has gone into effect. He urged the next administration to “stay[] the course because apparently the people have approved of the foreign policy that we have embraced.” Mr. del Rosario also called on the Permanent Court of Arbitration (PCA) to release the merits decision in the Philippines v. PRC arbitration sooner rather than later in light of “recent developments on the ground as a result of Chinese unilateral conduct.”

On the twenty-eighth anniversary of China’s seizure of Johnson South Island, Vietnamese demonstrators marched to protest Chinese maritime aggression. Though the protest was relatively small, it attracted more participants than a similar demonstration last year and, significantly, was not broken up by police. As VietNamNet explains, Hanoi and Beijing have a long history of conflict in the region; battles in 1956 and 1974 presaged the clash over Johnson South in 1988, during which 64 Vietnamese naval soldiers died and nine were taken prisoner.

The EU High Representative for Foreign Affairs and Security Policy released a declaration expressing concern over the PRC’s recent deployment of surface-to-air missiles to islands in the South China Sea. The statement noted that presence of missiles threatens freedom of navigation and overflight, and it further encouraged all claimants to peacefully pursue their claims through “UNCLOS and its arbitration procedures.” In acknowledging the declaration, Foreign Ministry Spokesperson Lu Kang blamed regional tensions on other “coastal countries’ illegal occupation of some islands and reefs of the Nansha Islands” and also declared that “China is determined in safeguarding territorial sovereignty and maritime rights and interests.”

In remarks at Singapore’s Lee Kuan Yew School of Public Policy, Foreign Minister Murray McCully of New Zealand stressed the importance of UNCLOS principles and non-militarization in adjudicating maritime disputes in the South China Sea. Mr. Key also voiced his approval for the Philippines v. PRC maritime arbitration and reaffirmed that “all parties” should respect the Tribunal’s ruling.

The Washington Post’s David Ignatius opines that either the upcoming PCA merits decision or a PRC-imposed Air Defense Identification Zone (ADIZ) could lead to a U.S.-PRC showdown over the South China Sea, and he suggests that one modest option for the United States is to help Vietnam and the Philippines build their own artificial islands. Our very own Julian Ku builds on Ignatius’s column and calls for U.S. policymakers to get past the debate on FONOPS. Elsewhere at the Post, Jason Aldag and Julie Vitkovskaya released a video that explores Chinese militarization in the South China Sea.

CSIS and its Asia Maritime Transparency Initiative had a number of great articles this week. Kicking off the AMTI analysis, Nong Hong argues that it’s still possible to peacefully manage Sino-American disagreements over the South China Sea; Richard Rossow and Sarah Watson explore the growing possibility of a reboot for the “Quad”—the once-defunct U.S.-India-Japan-Australia quadrilateral strategic partnership; and Renato Cruz de Castro takes a closer look at the recent turnaround in Philippine-Japanese security relations. Meanwhile, and true to form, CSIS summarizes the tensions in the South China Sea through a series of eighteen, and it also released a new interactive map showing the PRC’s military capabilities in the disputed waters.

Lastly, no post would be complete without a quick shout-out to our friends over at The Diplomat. This week, David Gitter looks at how Chinese analysts understand Taiwan’s geostrategic significance. Meanwhile, John Ford reminds South China Sea observers that, despite the hype, the Philippines v. China maritime arbitration won’t end all disputes in the contested waters.