A Jan. 20 freedom of navigation operation (FONOP) by a U.S. Navy vessel in the South China Sea attracted wide attention. The People’s Republic of China (PRC) had objected vehemently to a U.S. warship sailing near the disputed Paracel Islands and the U.S. Navy defended its conduct with equal vehemence. The previous week, however, the U.S. State Department more quietly published an extraordinary pair of documents that were closely related to that operation and received little attention. Together the two events highlight how, despite not joining the U.N. Convention on the Law of the Sea (UNCLOS), the United States plays several unique roles in enforcing that body of rules in the disputed South China Sea.

One role is high profile: In response to the PRC’s efforts to unlawfully restrict maritime activities, U.S. military power asserts international legal rights through practice, for example, by sailing freely through waters that the PRC claims are restricted or conducting naval operations in waters where the PRC excludes passage by foreign vessels. No other state can match U.S. military (especially naval) capability to conduct operations at sea that register the non-acceptance of such unlawful maritime claims.

I want to focus here on a second, lower-profile role: in-depth analysis and the expression of informed legal views on questions of international law. On Jan. 12, the State Department published some that pack a punch. The documents are part of a slow-motion battle of legal diplomacy stretching out over several years between the United States and the PRC regarding one of the world’s most dangerous flashpoints. One of the documents provides analysis that few governments in the world have the will and capability to produce. I therefore commend it to international law practitioners and teachers as a case study.

One reason why this document probably got so little public attention is that it sounds so abstruse. I’m talking here about the 94-page “State Practice Supplement” to “Study No. 150 (People’s Republic of China: Maritime Claims in the South China Sea)” in the U.S. State Department’s Bureau of Oceans and International Environmental and Scientific Affairs Limits in the Seas series. It’s a remarkable piece of international lawyering and an exquisite customary law analysis.

International law of the sea is complex—as are the competing South China Sea claims—but in brief summary, here is some background: The PRC asserts expansive maritime claims in this large, strategically and economically vital body of water. China defends its ambiguous “nine-dash line” of control around much of that sea as consistent with international law. China is a party to UNCLOS, and the United States (though not a party) accepts the relevant substantive UNCLOS provisions as reflecting customary international law.

Most states and an international arbitral decision binding on the PRC reject the PRC’s expansive maritime claims in the South China Sea as inconsistent with UNCLOS and customary law, which generally limit states’ “territorial sea” to 12 nautical miles from their land and limit states’ “exclusive economic zone” to 200 nautical miles from their land. That may sound straightforward, and figuring out where to draw those lines might sound easy, but it isn’t always.

Law of the sea also includes special rules about how to map the baseline from which those 12- and 200-mile limits may be drawn—which is usually the low-water line along the coast—because otherwise some geographic features would produce anomalous or impractical results. For example, if a coastline has a deep indentation, special rules sometimes allow states to draw a straight baseline across the mouth, thereby smoothing out the territorial sea and exclusive economic zone limits. If there is a fringe of small islands along the coast, special rules sometimes allow states to draw straight baselines enclosing them, essentially treating them as part of the coastline. Those special rules are spelled out in UNCLOS Article 7, and, as the January State Department documents emphasize, the United States considers these treaty provisions to reflect customary international law binding on all states.

One of the PRC’s several arguments defending its expansive South China Sea claims is that those UNCLOS baselines rules are supplemented by additional customary rules, which purportedly allow it to draw straight lines around four distant groups of islands over which it claims sovereignty (and other neighboring states claim, too). The PRC then uses the resulting traced shape (including both islands and underwater features) as the baseline from which to assert 12- and 200-mile entitlements. If one uses that method—essentially drawing straight baselines around groups of small islands and nearby underwater features rather than drawing curved baselines lines around each individual island one at a time—the resulting maritime entitlement zones are huge.

Here are two great maps from Limits in the Seas No. 150 that show what a difference this makes for the hotly contested Spratly Islands. The first map approximates what the territorial sea entitlements (that is, waters over which the rightful state may exercise sovereignty) would look like using lawful baselines. The second map approximates the apparent scope of the PRC’s claims, instead using straight baselines to enclose the entire set of islands and other seabed features as a single unit. It covers a vast swath of the South China Sea. 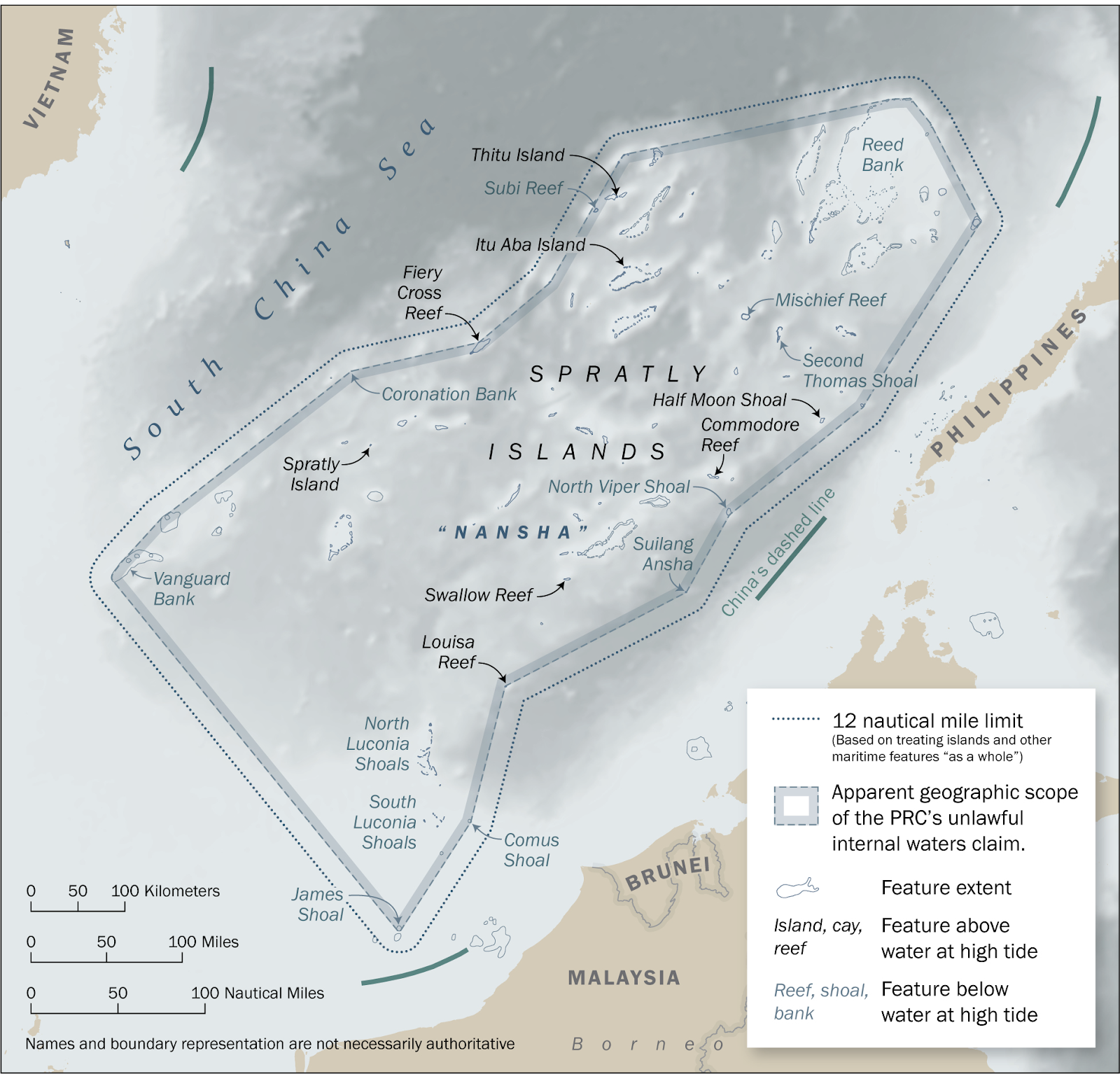 The PRC has not publicly defended in any legal detail this claim through official communications. Four years ago, though, the Chinese Society of International Law sought to justify the PRC’s South China Sea maritime entitlements position—including this use of straight baselines around groups of distant islands—in a 500-page article in the Chinese Journal of International Law. It claimed, among many other things, that “[t]he overwhelming majority of continental states possessing outlying archipelagos have drawn baselines (especially straight baselines) around their outlying archipelagos as units[.]” Accordingly, it argued that even if UNCLOS does not allow it, this practice is well established under customary international law and is therefore incorporated into the overall body of law for mapping maritime entitlements. In other words, it argues that UNCLOS doesn’t actually regulate the drawing of baselines for outlying archipelagos and, instead, the issue is governed by customary international law.

Anyone who practices or teaches international law knows that discerning and parsing customary international law can be very hard. It’s easy to state the formula, that it arises out of general and consistent state practice accepted as lawful or obligatory (or a similar formula). But methodological questions abound: How general? How consistent? Does limited state practice establish a rule or suggest that no such rule exists? When does contrary practice count as a breach of a rule versus evidence against a rule at all? Which states’ practice matters? How does one detect the actual legal basis informing the practice of states (including the possibility that it might be based on treaty law or instead on policy considerations)? The State Department’s “State Practice Supplement” to Limits in the Seas No. 150 deals carefully with all of those questions, as well as the important question of how broadly or narrowly to characterize a rule derived from a body of practice.

The document reviews the state practice of 23 states similarly situated to China (that is, non-archipelagic states with outlying island groups from the mainland), and shows that it varies considerably. Many of these states do not use straight baselines at all, and some states draw them only within a subset of close proximity islands within an archipelago and not the entire archipelago as China does. Using detailed geographic analysis, it further highlights that among the states that do draw straight baselines, none would enclose such vast amounts of ocean space within such geographically small areas of land as would China for at least three of its four declared South China Sea island groups. Importantly, all but one of the similarly situated states justify their baselines under UNCLOS rules, not customary law or the rule suggested by China. The supplement further documents instances in which states have objected to the practice of non-archipelagic states drawing certain straight baselines around outlying island groups. The document goes through each of the 23 most relevant states’ practice to systematically knock out each necessary element of customary international law that China invokes to support its views on baselines and outlying island groups.

Publicly released customary international law analysis like the “State Practice Supplement” from states is rare because such analyses are so hard to produce. In this case, the supplement addresses a negative proposition, that a given practice is not governed by customary law. My guess is that it took several years for a team of State Department lawyers and geographers (working on many other things, too) to research, draft, vet and coordinate this one. In addition to laborious research, the project probably involved significant state-to-state diplomacy to clarify directly the opinio juris, or basis of legal obligation or right, of some states. For example, the Chinese Society of International Law asserted that France’s practice relating to two noncoastal island groups evinces special customary law practice of enclosing distant archipelagos as units with straight baselines. That must have been a surprise to France. Besides analyzing carefully France’s actual practice and distinguishing it from the PRC’s assertions, the State Department apparently asked France about its position, and France denied reliance on customary rules beyond the comprehensive rules spelled out in UNCLOS as the basis for its own island baselines (see footnote 75).

Notwithstanding the United States’ status as a nonparty to UNCLOS, recent FONOPs and these latest Limits in the Seas documents are important reminders of the indispensable roles that the United States plays in interpreting and enforcing its rules—especially in the South China Sea.