On Saturday, the Assad regime used chemical weapons on the last remaining rebel enclave of Douma, outside Damascus, killing over 40 civilians. In response, the Trump administration has vowed to respond forcefully, with President Trump most recently taunting Russia to get ready for a barrage of “smart” missiles.

President Trump’s justification for his response rests on two arguments. The first is that the Assad regime’s use of chemical weapons owes directly to the Obama administration’s failure to uphold its red line after the horrific attack in Ghouta in August of 2013. The second is that a single, retaliatory missile strike is enough to deter future chemical weapons attacks.

Yet the most reliable evidence we have from Syria suggests neither argument is fully accurate. The chart below uses data from the Violations Documentation Center, an independent monitoring group based in Switzerland that relies on a network of researchers and investigators within Syria to track civilian casualties there. The chart demonstrates two interesting trends: 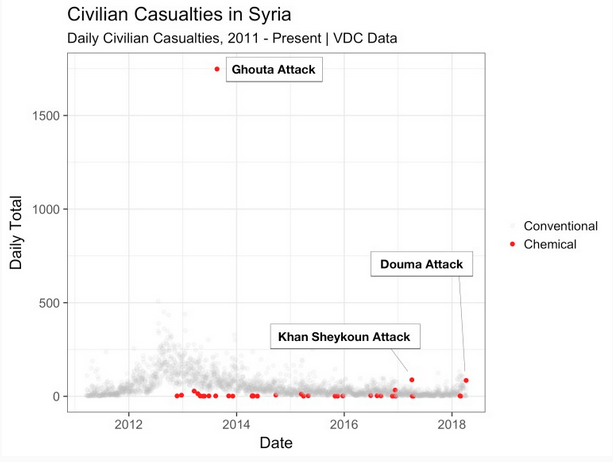 First, the chart shows clearly that the attack in Ghouta in 2013 is a massive outlier, one that the Assad regime has not repeated. Even the Khan Sheykoun in April of last year attack is an order of magnitude smaller. This begs a gruesome question: Why hasn’t the Assad regime carried out more attacks of similar scale? If deterrence relies on a show of force, and the Obama administration never used force, then why didn’t the Assad regime continue using chemical weapons en masse?

The answer lies in the scale and magnitude of the global outcry to the Ghouta attack in 2013. As images and videos of the hundreds of victims in Ghouta flooded YouTube and social media, the popular outcry over the atrocity prompted fierce debate over how best to respond in capitals throughout the world. Although the Obama administration ultimately refrained from taking action, the Assad regime—and as importantly, its backers in Russia and Iran—spent nearly two weeks unsure of exactly how devastating the response might be, at a time when the insurgency still posed an existential risk to the regime. The political cost of the attack was high enough—not just to Damascus, but also Moscow and Tehran—that the Assad regime has yet to repeat it, despite the enormous losses in manpower and money it has incurred in subsequent years of the war.

Meanwhile, the bottom right of the graph illustrates the deterrent effect of the Trump administration’s cruise missile barrage last spring. After the American military response last April, reported chemical attacks do drop off—but only for a time. Despite the 59 Tomahawk missiles the Trump administration unleashed on Shayrat airbase, the Assad regime nonetheless saw fit to carry out a chemical weapons attack of similar size and scale just last week.

As a result, the Trump administration now faces a bind. Its argument that a one-off military strike is enough to deter Assad from using chemical weapons again is clearly untrue. Indeed, the Assad regime would not have carried out the attack in Douma if it didn’t think it could handle another barrage of cruise missiles. Yet the Trump administration is also unlikely to significantly escalate its response either—just last week President Trump demanded that the Pentagon withdraw all forces from Syria within six months, which suggests he has little appetite for the kind of robust and sustained response that might actually deter Assad.

How Trump tries to square the circle remains to be seen. But given Trump’s pledge to withdraw from Syria, it’s unlikely that Assad’s latest use of chemical weapons will be his last.