Editor’s Note: The war against terrorism involves fighting more than terrorists. Some groups use guerrilla war, and still others are proto-states. The post-9/11 struggle has also brought the United States into greater contact with warlords, clans, and other non-state actors. Daveed Gartenstein-Ross and Jacob Zenn of the Foundation for the Defense of Democracies and the Jamestown Foundation, respectively, try to bring a sense of order to these many actors, offering a spectrum of "violent non-state actors" as a way to better conceptualize them.

The Trump administration’s appointments have signaled that it will continue to prioritize the fight against jihadist violent non-state actors (VNSAs)—a broad term that we find far more useful than an exclusive focus on terrorist groups, but a term in desperate need of clarification. In this article we provide a taxonomy of VNSAs that can be used to produce more rigorous discussion of them.

Beyond the challenge of jihadism, various VNSAs are likely to play a greater role in world politics in the coming years. Weakening states, ecological challenges, and rapid technological innovation, among other factors, have allowed non-state actors to challenge the power of nation-states in a way that has not been possible in recent history. As Sean McFate demonstrates in The Modern Mercenary, the Peace of Westphalia in 1648 didn’t end states’ reliance on private armies, but rather marked the beginning of a transition from the dominance of private military force to the ascendance of state military primacy that “was gradual, spanning centuries.” By the 20th century, the world had reached a period of absolute nation-state dominance.

But in the early 21st century, the dominance of nation-states is declining dramatically, and analysts are often uncertain what to call, or how to understand, these sub-state entities that are displacing nation-states’ monopoly on geopolitical power. This is typified by discussion of the Islamic State (ISIS), the extraordinarily powerful VNSA that once controlled a geographic area around the size of Britain. (Yes, ISIS is in steep decline today.) On the one hand, Reyko Huang has argued that ISIS is an “ordinary insurgency,” and described its control of territory as “typical among rebel and terrorist organizations.” In contrast, J.M. Berger wrote that ISIS “is not simply a hybrid organization, it is a hybrid of hybrids…. It is a proto-state, but also an insurgency, and also a terrorist network.”

This confusion over ISIS is typical of the debate on VNSAs—different definitions are scattered throughout the literature and often conflict with one another. But our study of VNSAs has revealed significant commonalities among various types of these actors; we believe they can be understood as part of a natural spectrum.

We provide a set of twelve VNSA typologies in a series of five spectrums, which can be used to categorize the VNSAs that are most relevant today: 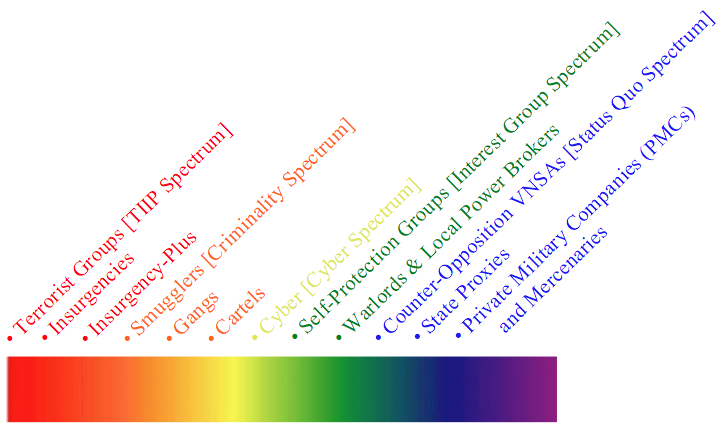 The five spectrums are color-coded along a partial Red, Orange, Yellow, Green, Blue, Indigo, Violet sequence. They are organized by the VNSAs’ relationship with the state, with the red spectrum (TIIP) being the most eager to uproot and replace the state (or, at least, to force changes in its policies), while the blue spectrum is most amenable to state power.

The red spectrum is called TIIP, referring to the three categories of VNSAs contained therein: terrorism, insurgency, and insurgency-plus. In almost all cases, TIIP VNSAs seek to overthrow, weaken, or extract concessions from state actors. We place ISIS in the insurgency-plus category, which refers to VNSAs that have taken on significant state-like qualities.

Terrorism, insurgency, and insurgency-plus can be seen as part of a spectrum if you look at the actors’ objectives. Most terrorist groups hope to trigger a state overreaction against the community they claim to represent, and thus engender more support for their cause. In this way, they hope to grow into insurgencies.

Insurgencies, in turn, hope to gain control of territory. They want to grow from insurgent movements into a dominant, governing force. In the era of decolonization, pro-independence insurgencies would later become the governments of newly independent nation-states. This was true in Algeria, Angola, Guinea-Bissau, Indonesia, Mozambique, and Tunisia, among others. But some more contemporary actors, like ISIS, might look like states but have no apparent desire for international recognition as such. The typology they aspire toward is that of insurgency-plus.

The most notable change in dynamics for TIIP VNSAs in recent years is their increasingly innovative use of social media, which allows them to gain a transnational reach more quickly than ever. Although ISIS’s international expansion was often overstated, the fact that it gained 37 wilayats (provinces) across the world within two years of its declaration of a caliphate legitimately represented an unprecedented speed of expansion. ISIS also leveraged its social media proficiency, and the boom in end-to-end encryption that made electronic communications much more secure, to use a “virtual planner” model of launching terrorist attacks across multiple countries, including its unprecedented Ramadan offensive last summer.

The orange spectrum, Criminality, includes smugglers, gangs, and cartels. Actors in the Criminality spectrum operate contrary to state law, but unlike those in the TIIP spectrum, they generally don’t seek war with the state—though there are recent exceptions to this rule, such as Los Zetas. Because entities in the Criminality spectrum are primarily profit-seeking, war with the state can be an inefficiency that detracts from their ability to make money.

Gangs in particular are a growing concern in the Western hemisphere, and are driving irregular migration patterns. In El Salvador, for example, Mara Salvatrucha (MS13) has been at the center of a skyrocketing murder rate and forced displacement crisis, and similar patterns can be seen in Guatemala and Honduras. As The Guardian reported:

In El Salvador, people are fleeing—and dying—at the same rate now as they did during the country’s 12-year civil war in which 1 million were forcibly displaced and 75,000 were killed. Last year, 6,657 people were murdered and violence forced at least 23,000 children to abandon school, in a country of 6 million people.

The yellow spectrum is Cyber. While almost every major VNSA will have some cyber capabilities in the future, the Cyber spectrum is distinct in that it is composed of VNSAs that only operate in the online environment. There are no doubt questions about whether actors operating entirely in the online space can in fact be considered violent, but extant definitions in the literature suggest that it is fair to understand them this way. Bruce Hoffman’s classic work Inside Terrorism defines terrorism as an act that is “violent—or, equally important, threatens violence” (emphasis added). The disclosure of personal information without consent can fit this definition.

At the high end of these disclosures is “doxing,” in which a victim’s personal information—often including physical address, social security number, credit card numbers, or even private passwords—is splashed online for all to see. Doxing has become more prominent in the past few years. It has been prominently employed by the cyber-vigilante group Anonymous, as well as by some members of the alt-right against the movement’s perceived enemies. In the wake of Michael Brown’s death at the hands of a police officer in Ferguson, Missouri, an individual claiming to act in the name of Anonymous doxed a person whom he believed to be Brown’s killer. As it turned out, he doxed the wrong guy. ISIS has also publicized the addresses of members of the U.S. military, trying to incite attacks against them.

The green spectrum, Interest Groups, includes the typologies of self-protection groups, warlords, and local power brokers. Actors in the Interest Groups spectrum often have a neutral or even positive relationship with the state. Insurgent and terrorist groups, particularly those with uncompromising ambitions like ISIS, may pose a greater threat to actors in the Interest Groups spectrum than does the state. (In contrast to ISIS, al-Qaeda has made a point of ingratiating itself to actors in this spectrum as part of its rebranding and localization initiative.)

Illustrating the potential durability of actors on this spectrum, some of the most powerful warlords in Afghanistan have been in positions of influence for decades, such as General Abdul Rashid Dostum, who is now Afghanistan’s vice president. Dostum, whom the U.S. State Department has described as “the quintessential warlord,” has been barred from entering the United States.

The blue spectrum is the Status Quo spectrum, as these actors tend to explicitly align with the state against other VNSAs. Actor types in this spectrum include counter-opposition VNSAs, state proxies, and private military companies (PMCs) and mercenaries. Of these typologies, only counter-opposition VNSAs is likely to be unfamiliar to readers as a term, though it is certainly familiar as a concept. A prominent recent example of a counter-opposition VNSA was the Sahwa (Awakening) movement in Iraq, which helped expel ISIS’s predecessor from the country’s Anbar Province. Today, the predominantly Shia popular mobilization units in Iraq serve a similar function, despite their sectarian differences from the largely Sunni Sahwa movement.

PMCs are typically employed by state actors, and thus are included in the Status Quo spectrum. The United States made prominent use of PMCs during the Iraq war, and today Russia is using PMCs to aid its intervention in Syria. An African PMC played a pivotal role in ousting Boko Haram from the territory it controlled in northeastern Nigeria in 2015. Despite their inclusion in the Status Quo spectrum, it is worth raising the alarming possibility that hyper-rich individuals could become more prominent buyers in the market for private force.

As VNSAs continue to grow in prominence, we will increasingly see different typologies playing prominent roles on various sides of armed conflicts. We can see VNSAs at the forefront of the Syria conflict, including ISIS, the al-Qaeda-linked Jabhat Fatah al-Sham, Hezbollah, Kurdish militant groups, rebel groups, pro-Assad militias, and PMCs. Similarly, different kinds of VNSAs have been prominent in the conflict in Nigeria.

Our hope is that our taxonomy of VNSAs can help analysts and scholars to better conceptualize the range of VNSA types and the relationships among them. They are too often lumped together as “terrorist” groups, but as this spectrum makes clear, doing so oversimplifies the function of distinct VNSAs. The approach we offer clarifies how the range of VNSA types differ in function, relate to one another, and relate to the state.

We hope that the foregoing discussion provides a framework for analyzing various types of VNSAs, and in that way can help to advance this still-nascent field.

Daveed Gartenstein-Ross is the chief executive officer of the private firm Valens Global, which has twice been named to Entrepreneur Magazine’s E360 list of the top small businesses in the United States. He is the author or volume editor of over 20 books and monographs.
More Articles

Jacob Zenn is an adjunct assistant professor on African armed movements at Georgetown University's Security Studies Program and a senior fellow on African affairs at the Jamestown Foundation. He conducted an organizational mapping of Boko Haram for the Swiss Embassy in Nigeria in 2015, ahead of negotiations that led to the release of 123 Chibok schoolgirls. Zenn’s new book, “Unmasking Boko Haram: Exploring Global Jihad in Nigeria,” was published in April 2020 by Lynne Rienner in association with the Handa Centre for the Study of Terrorism and Political Violence, University of St Andrews.
More Articles
Published by the Lawfare Institute in Cooperation With