The Islamic State’s use of social media and online tools to radicalize and recruit Westerners has become a subject of great interest among researchers, analysts and policy makers. Recently, attention has focused on the group’s use of its English-speaking members, primarily based in Syria and Iraq, to virtually connect with Americans and often encourage them to commit terrorist attacks within the United States. In a recent piece in West Point Combating Terrorism Center’s Sentinel, we argue that the Islamic State (IS) is using “virtual entrepreneurs,” who employ social media to connect people in the West to larger extremist communities, encourage radical beliefs, and suggest violent or illegal actions against the non-believer. 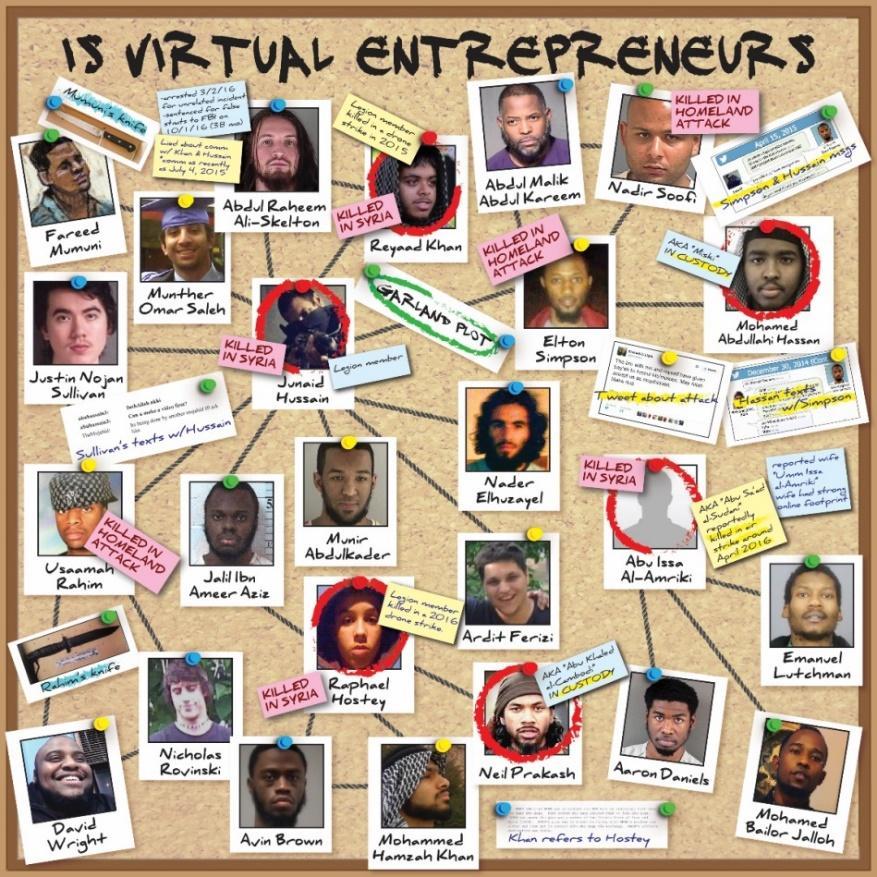 Since its launch, George Washington University’s Program on Extremism has tracked over 115 criminal court cases involving American IS supporters, reviewing tens of thousands of pages of court filings, and interviewing law enforcement officials, reporters, and attorneys connected to these cases. In so doing, we have identified and documented 19 U.S.-based individuals who were involved with virtual entrepreneurs for the Islamic State. Using messaging apps with encryption options like Telegram and Whatsapp, these virtual entrepreneurs encourage and guide zealous young jihadis with no terrorist training or experience, until they reach their full potential. The virtual entrepreneur nurtures and directs raw desire until the young jihadi is ready and able to take the next step for his cherished handler. In some cases, they have also had a direct hand in planning terrorist attacks in the West.

Some of the key IS virtual entrepreneurs are familiar to most counterterrorism policymakers, such as British hacker turned IS propagandist, Junaid Hussain. Others, like Reyaad Khan and Abu Sa’ad al-Sudani, have largely floated under the radar. Taken together, these virtual entrepreneurs were involved in at least 21 percent of IS-inspired domestic plots and attacks in the United States.

The involvement of virtual entrepreneurs is even more pronounced in Europe. Recent research finds that 19 out of 38 IS-linked plots in Europe between 2014 and 2016 involved some form of online instruction. Indeed, virtual entrepreneurs present such a threat to Western security that many are near the top of target lists, and at least four, including Hussain, Khan, and al-Sudani, were targeted and killed in anti-IS coalition airstrikes.

Virtual entrepreneurs represent a natural progression of the IS threat to the West. As military pressure has squeezed the group in its bases in Iraq and Syria, and governments have largely staunched the flow of foreign fighters from their shores, the group has sought to exploit its online reach to maintain a presence in the countries of its enemies.

Junaid Hussain’s presence on social media platforms like Twitter, for example, allowed him to gain an almost cult-like following among Western sympathizers. Hussain, a former hacker who had frequent run-ins with law enforcement, travelled to Syria while awaiting trial for a charge of violent disorder. Here was a man who practiced what he preached; he talked the talk and walked the walk. Not only did he support jihad on his Twitter feed, he joined and fought for the group in its heartland. Hussain’s actions gave him a level of credibility that he quickly leveraged into a following, allowing him to further the terrorist aims of IS in the West. Hussain was revered by American and British jihadists, who looked to him for religious advice and practical answers on everything from how to travel to join IS to religious rulings on fighting Jihad.

Hussain was always happy to advise potential jihadis on matters large and small. In one case, he provided an Ohio man, Munir Abdulkader, with the address of a U.S. military officer, and suggested that he be killed. Abdulkader relied on Hussain to provide material details. “Make sure the soldier was in Iraq or Afghanistan,” one text stated. “Do you know his work schedule? When he home etc?” said another. Abdulkader went further in his requests: “How do you make Molotov? You have a link? And what’s the knife to use? Sharpest?” He gave Hussain a play-by-play of his surveillance of targets and the supposed ease of purchasing a AK-47. At each step, Hussain was online and encouraging. Abdulkader was arrested shortly after that, having plotted part of his attack with an accomplice who was an FBI informant.

Heavy reliance on IS virtual entrepreneurs’ knowledge and connections is not unique to Abdulkader. Jihadist propaganda has been easily accessible through various online platforms over the last decade, and has played a role in radicalizing Americans. Now, with the advent of numerous social media applications (many of which use encryption technology), a would-be recruit can access real-time support and be given a stronger sense that he is part of the wider movement. This online support therefore sustains and encourages the recruit’s continued participation in the Islamic State.

In the past, American jihadis also sought religious justification and validation for their intended actions from recognized extremist leaders. Now, they can receive this from foreign fighters in Syria and Iraq, who have reached “rock-star” status due to their presence in the Caliphate. Their communications with these virtual entrepreneurs has in many cases been seen to provide them with the affirmation they think they need. The deaths of figures like Junaid Hussain may help stem the number of homegrown attacks and plots, but the experience of the last three years points to an emerging online approach that is likely here to stay.

Dr. Alexander Meleagrou-Hitchens is the Research Director of the Program on Extremism at The George Washington University. Prior to joining the Program on Extremism, Dr. Meleagrou-Hitchens was the Head of Research at the International Centre for the Study of Radicalisation (ICSR) and a lecturer on terrorism and radicalization at the War Studies Department in King’s College, London. An expert on extremist movements, he has researched and conducted fieldwork on jihadist groups in the United States, United Kingdom, East Africa, and Iraq with a focus on how they attract recruits.
More Articles
Published by the Lawfare Institute in Cooperation With