A flood of recent polling data shows Hillary Clinton leading Donald Trump in a head-to-head national match up, as well as in several key swing states. An oft-cited YouGov/Economist poll released last week found that in a two-way election, 47 percent of Americans would vote for Hillary Clinton and 41 percent would vote for Trump. Despite a USC Dornsife/LA Times poll released over the weekend showing Trump gaining ground, Real Clear Politics calculates that Hillary averages a 5.5 point lead over her Republican rival.

Meanwhile, a Quinnipiac University poll released last week found that Hillary Clinton enjoys a double digit lead over Mr. Trump in swing states like Colorado (41 to 33) and Virginia (50 to 38). She maintains a razor-thin lead over Mr. Trump in Iowa (41 to 39), the Quinnipiac survey found, and also hold a slim (43-39) lead in Ohio, according to a Monmouth University Poll released just yesterday.

These data have generated plenty of headlines as news organizations track each twist and turn in the polls. But, as James Hohmann recently wrote for the Washington Post, “sometimes the most interesting numbers in a poll are the ones that do not change.”

Though Hohmann’s piece addresses public opinion on Donald Trump, his observation is also true of polling on national security. Americans’ sense of the importance of national security in this election has remained notably steady over the past few months. And so long as national security remains an issue of paramount concern to voters, the candidates’ qualifications to serve as Commander in Chief will be a focal point in the general election.

NBC News-Survey Monkey data indicates that since the beginning of 2016, Americans have consistently identified “terrorism” as a key issue in the 2016 election. Terrorism polls ahead of immigration, education, and the environment. Since the Pulse nightclub attack in Orlando, the share of Americans who identify terrorism as the most pressing concern is second only to the share of those who identify “jobs and the economy.”

The YouGov/Economist poll released last week underscores the public’s focus on national security issues. Ninety-one percent of Americans identify terrorism as an important issue, the poll found, with 53 percent saying it’s “very important” and 23 percent saying it’s “somewhat important.” Additionally, 90 percent of Americans say the “use of military force” is an important issue, with 54 percent reporting that it’s “very important” and 36 percent who say it’s “somewhat important.” This markedly security-oriented tone is particularly striking when considered against the backdrop of recent history; when Hillary Clinton ran for the Democratic nominee in 2008, then-Senator Obama was campaigning as a peacemaker. During the 2012 election, the share of Americans who identified terrorism as a major problem facing the United States polled consistently below five percent, as IPSOS illustrates below. 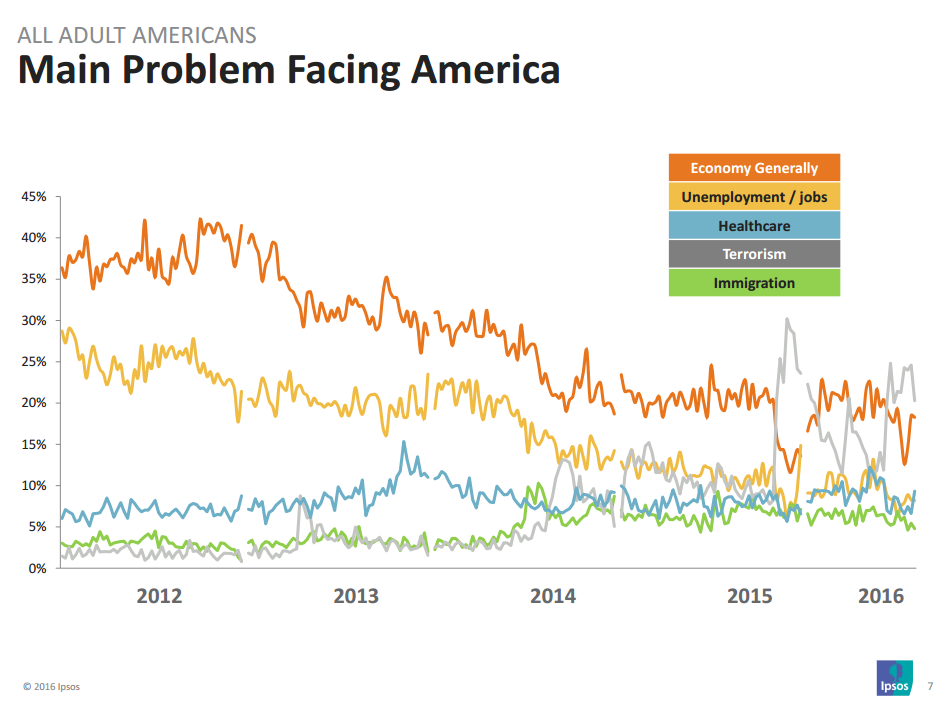 Given the importance of national security issues in 2016, it is noteworthy than Americans are more uneasy than they are confident in the ability of both candidates to handle terrorism. According to the most recent YouGov/Economist poll, 52 percent of Americans say they are “uneasy” about Hillary Clinton’s ability to handle terrorism, while just 41 percent say they are “confident” in her abilities. These numbers are hardly a boon for the Clinton campaign, which has consistently sought to play up the former Secretary of State’s foreign policy prowess. But Donald Trump fares even worse: just 31 percent of Americans say they are confident in Mr. Trump’s ability to combat terrorism, compared to 61 percent who say they are uneasy. With both candidates underwater on an issue of consistent concern to many Americans, each campaign’s efforts to position its candidate as the more effective—or, perhaps, least ineffective—Commander in Chief will be of utmost importance.