Sultan Haitham delivers his first speech after being sworn in as Sultan Qaboos' successor in Muscat on Jan. 11, 2020. Photo credit: Oman News Agency

Oman’s is set to run out of its current oil and gas reserves in less than two decades, a highly problematic estimation. Indeed, hydrocarbons—which are the sultanate’s top exports (see Figure 1)—funded major infrastructural, educational, and healthcare development in the 1970s and 1980s, and generated 68 to 85 percent of yearly government revenues over the last 30 years (depending on fluctuations in oil and gas prices). The sultanate’s overreliance on oil has become even more problematic given the 2020 fall in global oil prices, which strained both the country’s gross domestic product (GDP) expansion and its fiscal and current account balances.

During his 50-year reign, the late Sultan Qaboos attempted to diversify the country’s economy away from natural resources. Ultimately, however, these attempts were unsuccessful. After ascending to the throne last year, Sultan Haitham pledged to address Oman’s economic challenges. Economic reform is more urgently needed in the sultanate compared to some of its Gulf neighbors, as its oil reserves are smaller and more geologically challenging. 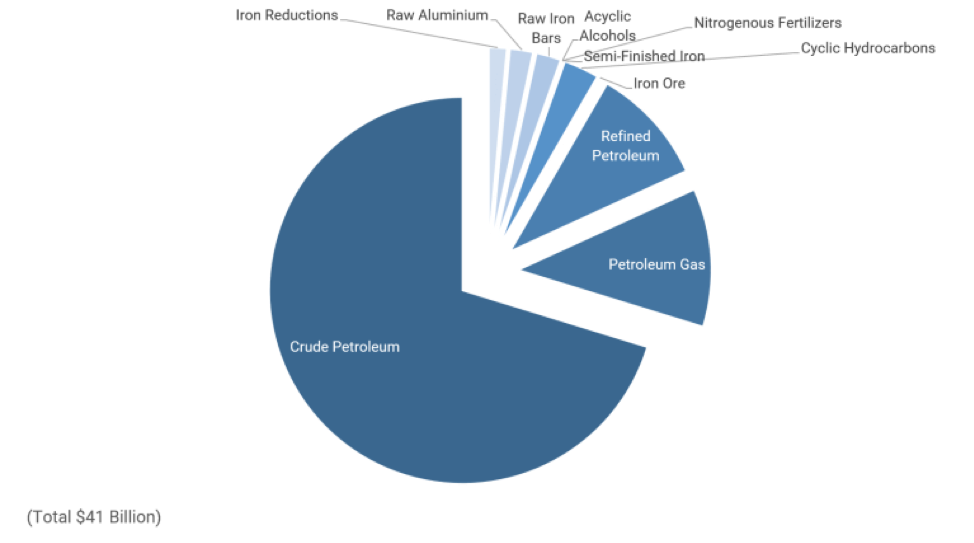 Oman’s economic outlook has worried domestic, regional, and international actors in recent years. Due to the sultanate’s wide fiscal deficits and overreliance on external funding, international credit rating agencies—such as Moody’s Investors Service, S&P Global Ratings, and Fitch Group—downgraded Oman’s credit rating to junk status and cut its outlook to negative in 2019 and 2020. Regionally, officials from the Gulf Cooperation Council (GCC), which provided Oman with $10 billion in development aid in 2011, have reportedly recognized in 2020 that the sultanate became more vulnerable due to the economic impact of the coronavirus pandemic as well as low oil prices. At the domestic level, much of the popular discontent in Oman’s recent history has been motivated by economic hardship and the desire for socioeconomic reform, as could be seen from the various protests and strikes that took place in the sultanate in 2011, 2012, 2018, and 2019.

Low oil prices and lockdown measures implemented in 2019 and 2020 to control the spread of the COVID-19 pandemic have certainly exacerbated Oman’s economic woes. In fact, Fitch estimates a budget shortfall of nearly 20 percent of GDP in 2020, compared to 8 percent in 2019. However, even before the pandemic reached Oman, the sultanate was already one of the two most vulnerable GCC economies (along with Bahrain). In fact, despite being the largest non-OPEC Gulf exporter, Oman suffers from major structural issues including lower-than-predicted oil reserves, overreliance on external funding, high external vulnerability, high public spending, limited capacity to adjust to external shocks, and high unemployment rates (which reached around 15 percent nationally and over 30 percent for young people in 2017).

Both a blessing and a curse, natural resource production dominates Oman’s economy. Oil and gas export has been the leading currency earner in Oman since 1967. Crude oil is a major catalyst for GDP growth; the latest data from the Central Bank of Oman shows that the share of petroleum activities in GDP reached 36 percent in 2018—that’s a 7 percent rise from the previous year. (See Figure 2.) In 2019, the sultanate recorded an average crude oil production of 977,100 barrels per day (bpd); it exported 281.7 million barrels of crude oil that year. Oman also processes oil at various refinery facilities, including in Muscat’s Mina Al Fahal and the Sohar Port Industrial Complex. In 2017, both had a processing capacity of 222,000 bpd of crude oil.

Furthermore, a new refinery project set to come online in 2022 is underway in Duqm. This project, along with an expansion to the Sohar complex in 2018, is part of the Omani regime’s efforts to develop refining capacity and attract industry investors. With an approximate cost of $2 billion, the Duqm refinery project will increase the sultanate’s refining capacity by 230,000 bpd and will allow Oman to produce high value-added products.

Oman’s overreliance on natural resource exportation means that its economy is tied to the rise and fall of oil and gas prices. In particular, it has been negatively impacted by repeated crashes in global oil prices in recent years. (See Figure 3.) Brent Crude Oil Prices fell from $106.57 per barrel (/bbl) in January 2014 to $45.82/bbl in January 2015. They dropped further to $28.55/bbl in January 2016. The oil market experienced what was then its worst annual year loss in 2018, when prices fell from $86.07 to $50.57. In 2020, in the midst of the coronavirus pandemic and the ensuing global economic slump, oil prices dropped to their lowest point in April 2020, with Brent Crude oil reaching $9.12. 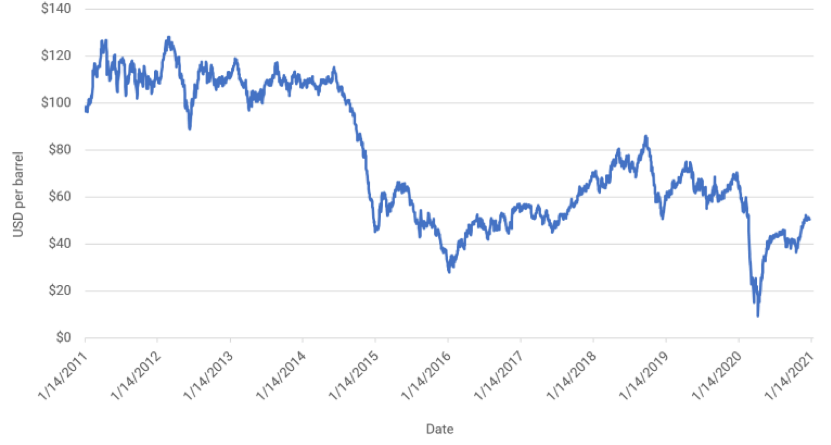 Although Oman is the largest non-OPEC oil exporter in the Middle East, it has smaller reserves compared to its Gulf neighbors. By the end of 2017, Oman had proven oil reserves of 5.4 billion barrels—or 700 million tons, which is 0.3 percent of the global total—according to the Petroleum Development Oman Company (Oman’s leading crude oil production and exploration company, which pumps most of the country’s crude oil and operates the majority of its oilfields, gas fields, production stations, and active wells).

The sultanate’s reserves-to-production ratio—its remaining amount of petroleum expressed in time—was only 15.2 years in 2017. Furthermore, unlike many of its neighbors, Oman’s oil reserves are geologically challenging and often require costly extraction techniques. (For context, these are four times more expensive than in Saudi Arabia.) More oil may be discovered in Oman, but this would not affect this estimated timeframe of reserve depletion, unless it is discovered in great quantities. What does this mean for the regime? It must imperatively adapt to a post-oil economy sooner than other GCC states with higher reserves.

Since 1996, the regime has been preparing for the eventual oil shortage by developing Oman’s second most important energy resource, gas (specifically, liquified natural gas, which is mainly used for export and to support domestic industry). However, the regime now needs to diversify the economy away from hydrocarbons altogether. To achieve this, the regime must first renegotiate its pseudo-rentier social contract with the population.

Indeed, the Omani leadership must prepare for the political implications that are bound to accompany radical economic change. As a first step, it will have to cut public spending (by raising taxes and reforming the subsidy system). While this may lead to public contestation, the regime should not rein back its efforts at the first sign of discontent, as it did after the 2018 protests which were triggered by rising unemployment rates, tax increases, and a 20 percent reduction (between 2015 and 2018) of the country’s energy bill.

Second, the Omani leadership must be prepared to accept that renegotiating its social contract with the population will likely involve some degree of political liberalization on the regime’s part. This may require the regime to open the political sphere and eventually transition from an absolute monarchy, where the ruling coalition does not share power, to a less constrained political system with more representation and participation.

In the immediate future, in terms of concrete economic change, the new sultan must prioritize diversifying Oman’s economy away from natural resources by focusing on and investing in non-hydrocarbon sectors with potential for high revenues, such as tourism. Furthermore, he must prioritize not only job creation and Omanization of labor, but also closing the training gap between nationals and expatriates by training nationals for specific sectors in which they are employed to a lesser extent than expatriate workers, such as education, engineering, and medicine. (See Figure 4.) Most importantly, the regime must recognize that its economic strategies can no longer rely on natural resources. 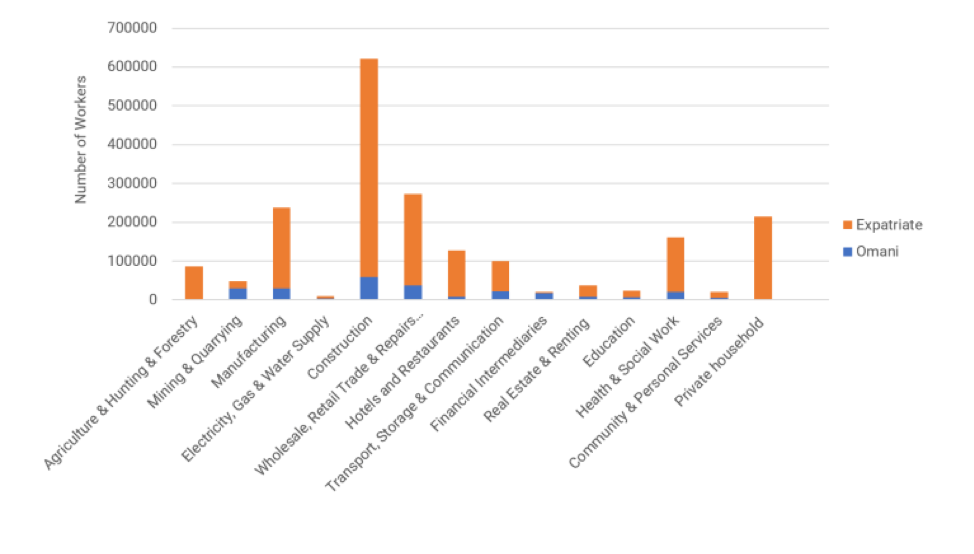