I spent the last two days at a terrific conference in at Columbia Law School on asymmetric warfare and the laws of armed conflict, organized by Matthew Waxman and the great Stanford international relations scholar, Steve Krasner. The conference was interesting in bringing together top-flight international relations theorists and international law experts to discuss an issue both think about---but for whom the vocabularies and methodologies of inquiry are totally different. The essential question on the table was whether the laws of armed conflict are useful in situations in which non-state groups predicate their entire strategies in conflict on the violation of those rules and how the law might adapt to incentivize greater compliance. I have adapted the following notes, which I wrote up initially for the conference participants and modified in response to participant comments, for Lawfare readers.

It seems to me that if we are seriously to examine how to define the laws of war for asymmetric conflicts between states and non-state groupings, we would do well to start with the question of why we have the problem we find ourselves addressing in the first place. Why is it that we are now, rather suddenly in the broad scheme of things, concerned with the relative powerlessness of major state militaries to confront relatively small groups of people from targeting civilians and shielding themselves among other civilians? Surely this problem is not some creature of new technology or globalization---as Al Qaeda, by contrast, just as surely is. The technologies used by Hamas and Hezbollah and the Taliban are mostly pretty primitive, after all. People have been capable of rocketing civilians for a long time, and strapping bombs onto one’s body is hardly---pardon the pun---rocket science.

Nor is the modern era the first time that states have faced insurgencies. There’s rather a long tradition of insurgent groups’, of one sort or another, impolitely refusing to fight according to rules that powerful, established armies have defined and insisted were civilized---yet just happened grossly to favor the interests of those very states and parties.

So we should start with the question why we are talking about this issue now. Why is it that we are suddenly anxious that a body of law that has never commanded universal acceptance and compliance and has always offered certain advantage to those who flout it today does not today command universal acceptance and offers certain advantages to those who flout it? The answer to this question, in my view at least, should condition the answer of what to do about the problem of asymmetries in respect for and compliance with the law of armed conflict.

For many commentators, the answer to this question lies in the rise of groups like ISIS, Hamas, Hezbollah, and the Taliban, but I think this is not quite right. Any number of Latin American insurgencies had no regard for the laws of war over long periods of time without provoking a crisis in the law. In my view, we are talking about this today not simply because of the barbarities of any groups but because of the reaction over time to the behavior of those groups by NGOs, international organizations, activist groups, and many members of the legal academy---for whom systematic violations of the law of armed conflict by insurgent groups is just not quite as troubling as is the reaction to those violations, often taken in rigorous compliance with the LOAC or in good faith attempts to comply, by organized state militaries, particularly those of the United States and Israel.

The crisis in the law of armed conflict, in other words, emerges not from the willingness of non-state groups to flout its most fundamental strictures as a matter of core strategy. It emerges, rather, from the impunity with which they do so not merely in relation to the formal legal consequences (to which impunity many other variable may contribute), but relative to the indulgence of the self-appointed guardians of IHL, human rights law, and international law more generally. To put it simply, the world has responded to the ever-increasing outrageousness of these groups with ever-increasing demands on their opponents---ironically, the most legally scrupulous militaries in the world---to achieve something close to perfection in civilian protection. The soft-law world is just not quite as horrified by Hamas as that group’s behavior and the relevant IHL conventions would lead one to expect. And it’s way more horrified by, say, civilian casualties in US drone strikes against terrorist leaders than one might expect given the actual requirements of IHL with respect to air strikes against legitimate military targets placed amid civilian life. The political pressures generated by the law, therefore, tend to militate in exactly the wrong direction. And that is not the fault of the terrorists. To assign blame on this point, rather, we must look to New York, to Geneva, to many European capitals, and to the fundraising strategies of human rights groups.

Consider, for example, the history of the suicide bombing---of which I will here offer the crudest of overviews. Prior to the early 1980s, suicide bombing was essentially unknown. It certainly was not a feature of Middle Eastern terrorism or terrorism against U.S. targets. In 1983, however, the groups that were coalescing into Hezbollah attacked the U.S. Marines barracks in Lebanon with a suicide truck bombing, killing 241 Marines. A similar attack on a French base also killed a large number of people. And Hezbollah conducted a number of suicide attacks on Israeli military targets in Lebanon as well. And, let's face it: the group got away with it. The tactic was effective. The world responded in horror, yes, but not so much horror that one might not try it again. The Marines were soon gone. And the Israelis redeployed out of population centers to better protect their forces.

A little more than a decade later, Hamas needed to throw a wrench into the Oslo peace process. So the group put its own stamp onto the tactic Hezbollah had pioneered---and that terrorists in Sri Lanka had refined. They at once downscaled and ramped up suicide bombings. Where Hezbollah had mostly aimed a small number of relatively big attacks on military targets, Hamas sent many suicide bombers on foot onto civilian busses and to other crowded places in Israel. As Henry Dodd writes, “At least 742 civilians were killed and 4,899 were wounded by suicide bombings in Israel and the Palestinian Territories according to data from the University of Chicago. During the fighting in Lebanon only 88 civilians were killed by suicide bombings and 160 were wounded.” Again, the attacks worked. They helped derail the Oslo process. They helped precipitate the initial election of Binyamin Netanyahu.

And once again, Hamas did not suffer the sort of ignominy one would expect of a world actually committed to the LOAC. Yes, they always received condemnations. And no, no human rights group or law professors defended the legitimacy of the tactic. On the other hand, the weight of human rights reporting and advocacy was always directed at the other side. There was a certain tolerance for the idea that the weak may have to use horrible tactic and that the bigger problem is not the neutral enforcement of IHL rules but the restraint of the strong. The reaction was similarly inflected by a certain sympathy for the Palestinian national cause, though LOAC jus in bello rules are supposed to operate independently of jus bellum rules and apply equally irrespective of whom one sympathizes with in a conflict.

There were a lot of reasons beyond simple anti-Israel bias for the grotesque lack of focus in the soft-law community on Hamas's evisceration of a norm that had been strong since World War II--and later its indiscriminate rocking of Israeli civilians. Israel is more responsive to human rights pressure, after all. It takes IHL seriously enough that there’s a rewarding dialogue to be had. But the reasons aside, the result was that the world---let's face it---tacitly acquiesced to the idea that there were two sides in this conflict, one of which was allowed to intentionally target civilians either with human bobs or with indiscriminate rocketing. Today, most of the political pressure in Europe is for greater engagement with both Hamas and Hezbollah---and the Boycott, Divestment and Sanctions movement is directed at their opponent. So yes, Hamas and Hezbollah have paid a price for the use of suicide bombing tactic, but not too high a price.

And others have noticed. Suicide bombing has spread all over the Muslim world. And why not? One is entitled to wonder why it hasn’t spread further. It’s cheap, easy, and effective---and, whatever people may say, it’s objectively speaking just not that frowned upon. Henry Dodd publishes the following arresting graph: 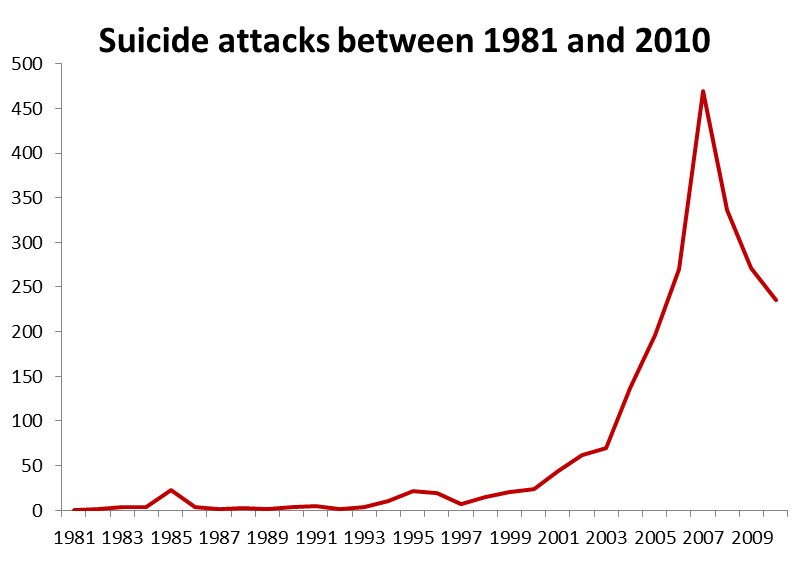 And as it has spread, the pattern has repeated. There was far more attention by the soft-law world to human rights issues in, for example, the U.S. drone strike on Anwar al Awlaki than there been human rights reporting on the behavior of AQAP. There is a UN special rapporteur to investigate drone use. I don’t know of one to investigate suicide bombings.

In the political economy of conflict, the insurgent parties are always going to try to push the lines---precisely because they have many fewer tools available to them. The guardians of the laws of armed conflict have not defended these lines, and they have not defended them precisely because they are more afraid of and offended by American power and Israeli settlement activity than they are of the behavior of non-state actors. There are many reasons for this, but we should be candid that the lines states have defined will not survive to the extent they are not policed. And when the organizations and scholars charged with policing them tolerate their politicization, the problem lies not with the terrorist groups, who are simply availing themselves of the tools the world has left at their disposal. The reason, in short, we are discussing this now is that the international community does not actually believe in the neutral principles it has defined.

To be clear, I am not saying that if we simply lived our LOAC principles, Hamas would feel irresistible pressure to conform to the dictates of the law and would moderate. I am saying that if we do not focus relentlessly on the most serious LOAC violations, we have no chance of defending the lines the law draws.