With a purge of the leadership at the Department of Homeland Security, President Trump seems poised to toughen U.S. immigration policies even more, including possibly resuming the practice of separating migrant children from their parents. But a fresh survey by the University of Maryland Critical Issues Poll, which we run, suggests that the president should be less confident of the mass appeal of his harsh approach to immigration. The poll of 3,015 Americans, which was fielded by Nielsen Scarborough from March 15 to April 2 with a margin of error of 1.78 percent, shows that 65 percent of respondents (and 72 percent of those under 35 years old) say separating families is “unacceptable.” At the same time, a plurality of Republicans, 49 percent, say such separation is acceptable, with 34 percent saying it is unacceptable. 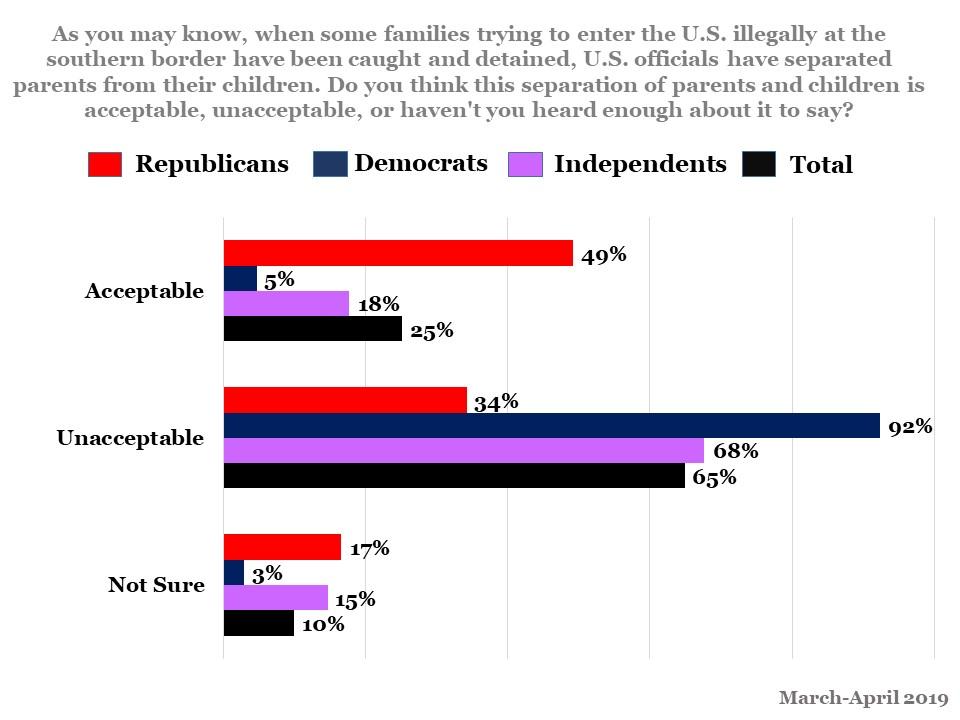 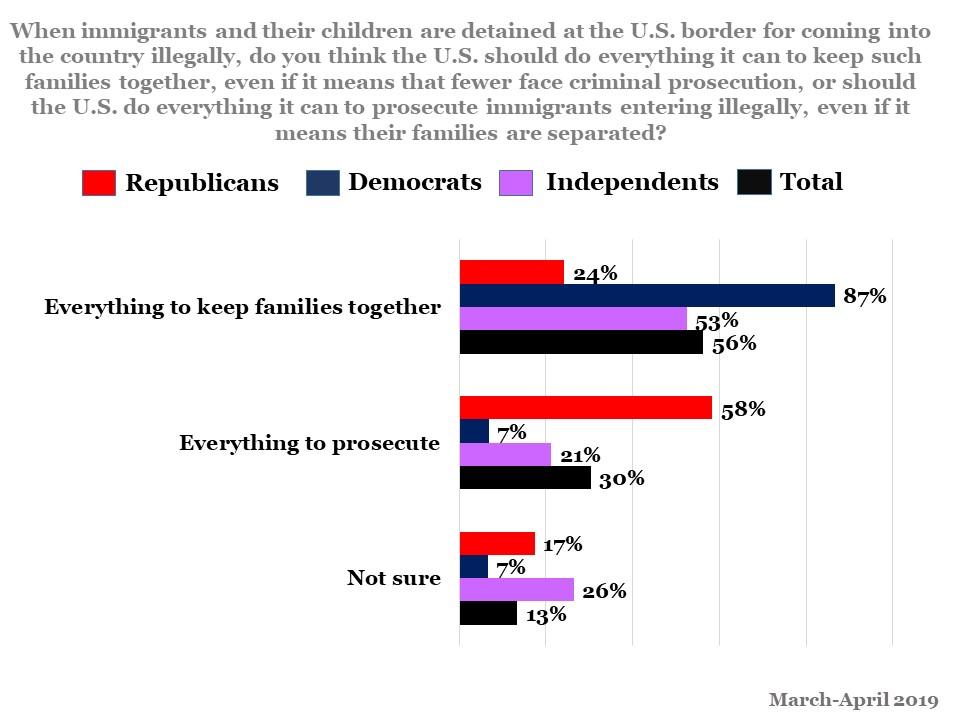 Americans are even more divided on Trump’s handling of the family reunification issue since a judge has ordered the Trump administration to reunite parents and children who were separated at the border. Overall, 44 percent of Americans express disapproval of Trump’s handling of the issue, while 35 percent express approval. However, once again, there is a strong partisan divide on this issue. While 76 percent of Democrats disapprove, 60 percent of Republicans approve.

Trump has continued to frame the issue of illegal immigration as one of public safety. Most Americans, though, seem to recognize that immigrants are not more likely than American citizens to commit crimes: 54 percent say that immigrants are unlikely to commit more crime, compared with 30 percent who say they are more likely to do so. While 82 percent of Democrats say this is unlikely, 56 percent Republicans say the opposite.

A majority of Americans, 58 percent, say that the immigration raids being carried out across the country by federal immigration enforcement agents are targeting undocumented migrants regardless of whether they have a criminal record, while just 19 percent say the raids are targeting only those with criminal records. Notably, the partisan divide is not as deep on this issue as on others: Democrats overwhelming say all undocumented immigrants are targeted, but Republicans are evenly divided on this issue. 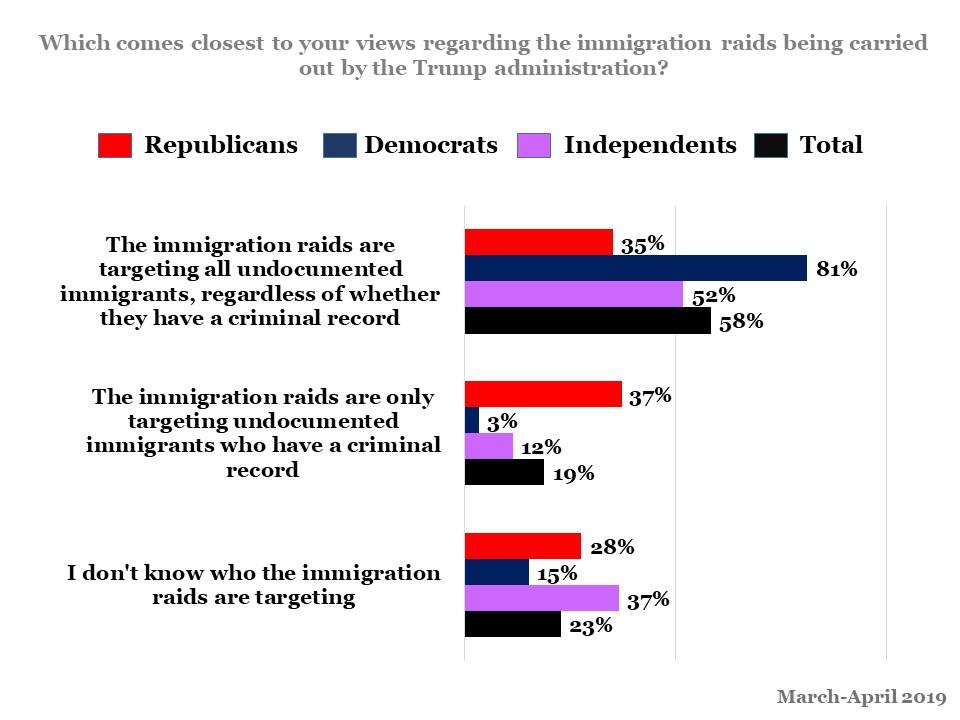 Regardless of whom Americans believe are the intended target of the immigration raids, there is a striking partisan divide on expressed support for these activities: While 81 percent of Democrats disapprove of the raids, 88 percent of Republicans approve.

Despite the restrictive immigration policies the Trump administration has implemented, a plurality of Americans (42 percent) believe that immigration helps the United States more than it hurts it (24 percent). Again, we see differences across partisan lines. Two-thirds of Democrats (67 percent) say immigrants help the United States more than they hurt it, while 41 percent of Republicans say the opposite. 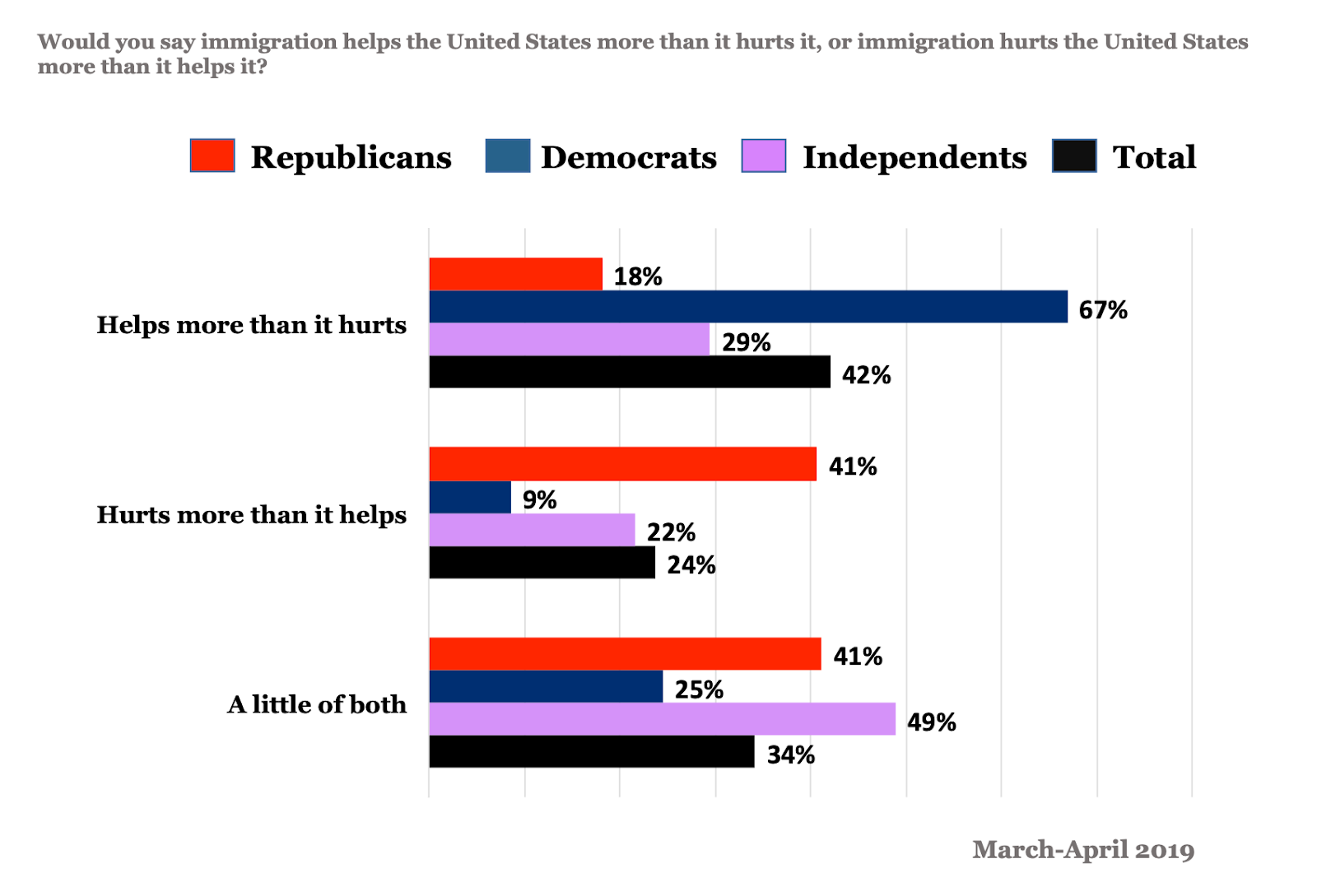 Taken together, in the era of tribalism and identity politics, American public views on many aspects of the immigration issue follow the now-familiar partisan divide. This is particularly pronounced on the issue of the immigration raids being carried out across the country by federal immigration enforcement agents, where the divide is the most significant. But rhetoric linking immigrants to crime and the issue of family separation present possible trouble ahead for Trump—especially with two-thirds of the public disapproving of separating families, including large majorities of Democrats and Independents. These issues did not provide a winning message for Trump and Republicans during the 2018 midterm elections. And the loyalty of Trump’s base seems to go only so far, with 49 percent of Republicans sticking with the president on this issue. Trump’s doubling down on family separation could spell trouble in 2020.