Editor's note: The Navanti Group is a data analytics company that uses a specialized network of local researchers to provide insight into local dynamics in hard-to-reach places around the globe. As the “Theft of the Century” continues to ripple through Moldovan politics, Navanti analyst Aleksei Lund assesses the long term impact of the event on Moldova and the wider region.

Rifts between pro-Russia and pro-Western populations in Ukraine have been the subject of international attention since Russia annexed Ukraine’s Crimea Peninsula in March 2014. Yet Moldova, Ukraine’s small neighbor to the west, has been quietly suffering many of the pathologies that put Ukraine in the headlines for the last two years: a Russian-backed separatist republic on its eastern flank, economic recession, and political turmoil.

Though Moldova and its small population are rarely included in geopolitical discussions, the fallout from the November 2014 banking scandal—in which one billion dollars, roughly one-eighth of Moldova’s annual GDP, vanished from the central bank—has highlighted the growing rifts between pro-Russia and pro-EU support in Moldova. The tensions between these groups challenge the prevailing consensus that Eastern European countries cultivating closer ties to Western security and economic organizations will invariably see substantive domestic reforms as well.

For the first fifteen years of its independence, Moldova maintained pragmatic relations with both the West and Russia, a reflection of its geography and continued reliance on trade and remittances from Russia. Over the last decade, however, Moldova has taken tentative steps towards European integration, signing an individual action plan with NATO in May 2006, electing a pro-European coalition government in 2009, and signing an Association Agreement with the EU in June 2014. 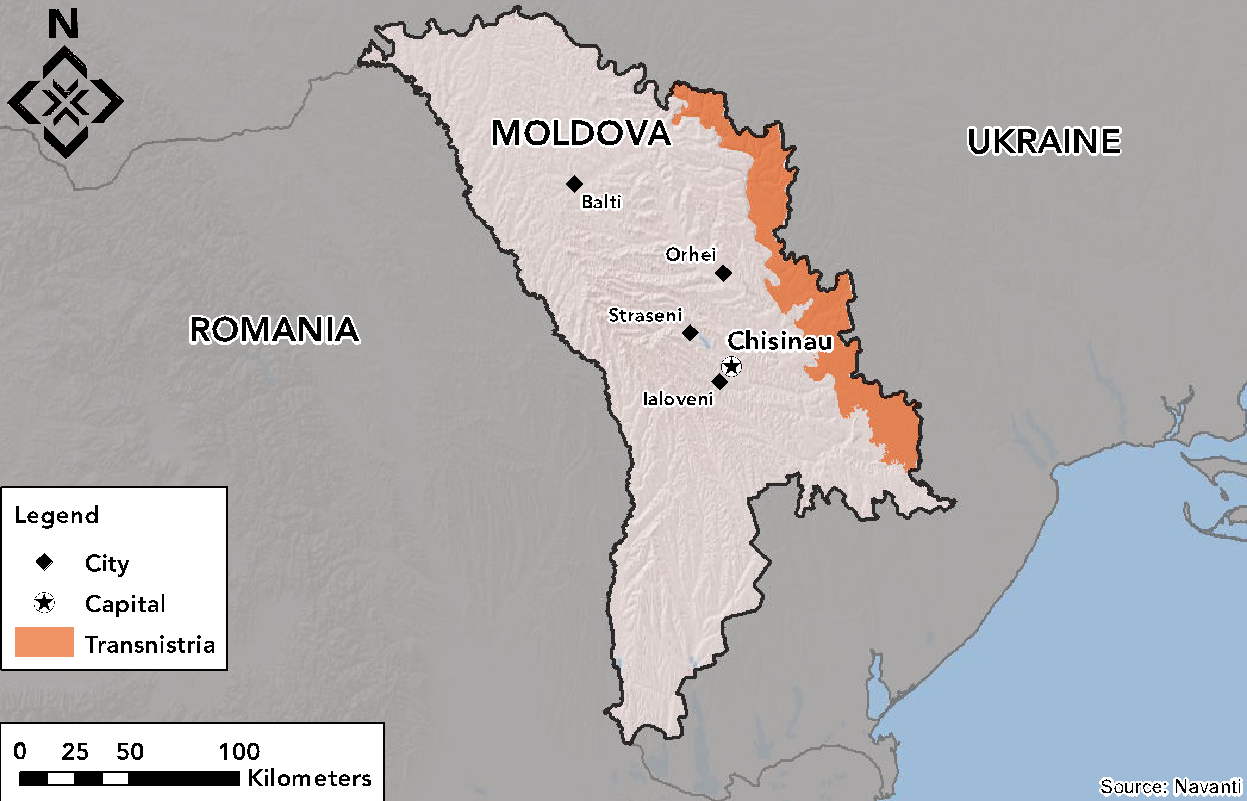 Moldova’s westward trajectory came to a quick halt in late November 2014, when Moldova’s central bank stepped in to prop up three banks—Unibank, Banca Sociala, and Banca de Economii—which had just transferred roughly one billion dollars to offshore accounts over the course of the month. The mechanics of the scandal remain murky, but a leaked report by the auditing firm Kroll suggests associates of Moldovan businessman Ilan Shor undertook a coordinated effort to gain control of the three banks through proxy purchases of shares starting in 2012. Over the next two years, the banks used foreign deposits to underwrite loans to companies that Shor and associates appear to have controlled. Both Kroll and Moldovan experts suggest the complexity of the operations—notably, the extensive use of opaque limited partnerships registered in the UK and the apparent coordination between the three banks—indicate Shor and his associates did not act alone.

Moldova has seen more than its share of scandals in the past few years, from prime ministers forging their academic credentials to suspicious accidental deaths. The “theft of the century,” however, spread well beyond local tabloids and had an immediate impact on Moldovans’ livelihoods. The Moldovan government’s attempts to bail out the affected banks spiked inflation, while the need to cover resulting budget deficits led to price increases for electricity and heating. A Chisinau resident told our researchers his family has had to cut back on many “comforts,” blaming the government and the “theft of the billion dollars” for his troubles.

The official response to the scandal, meanwhile, has been slow, selective, and primarily targeted against rivals of the ruling coalition. Most notably, authorities arrested former Prime Minister Vlad Filat on the parliament floor in October 2015. On June 27, 2016, a district court found Filat guilty of “passive corruption and embezzlement,” charges that could carry nine years in prison. Shor, meanwhile, has been in and out of house arrest in the last year, winning a mayoral elections in the small town of Orhei in June 2015.

Yet popular discontent over the scandal runs too deep to be so easily quelled by the verdict—not least because many Moldovans suspect the true culprit to be businessman Vlad Plahotniuc, the main power behind the current pro-European coalition. “Filat isn’t innocent, but if he were the one behind it all, he wouldn’t be in jail now. Vlad Plahotniuc was directing [the bank theft],” commented one Chisinau resident at a protest in October 2015.

Although the details of the scandal do not easily align with Europe’s geopolitical divisions—Shor’s ties to Russian finance appear to have been no less crucial than the lax oversight of offshore companies in Britain and banks in Latvia—it has nevertheless been absorbed into ongoing conflicts between pro-European and pro-Russian segments in Moldovan politics. For the latter, Russia’s punitive sanctions against Moldova following its EU Association Agreement revealed the economic costs of moving towards Europe, while the scandal confirmed their suspicions that embracing Europe left the country in worse hands than it had been under the pro-Russian Communist Party from 2001 to 2009.

The revelation of the banking scandal initially galvanized pro-Russian sentiment in Moldova. Comprehensive polling from April 2015 showed that 50% of Moldovans preferred joining the Russian-led Eurasian Customs Union to the EU, up from 41% the previous year. Widespread nostalgia for the Soviet era and admiration for Russian president Vladimir Putin raised the specter of a pro-Russia protest movement unseating Moldova’s government. In the words of one protester interviewed by a Navanti researcher, Moldova “needs someone like Putin to take charge of things.” Meanwhile, anti-establishment and pro-Russian sentiments have allowed political newcomer Renato Usatii, a businessman with ties to Russian Railways, to become the most trusted politician in Moldova.

The initial pro-Russian tide has ebbed in recent months, but it has not led to a convergence towards Europe so much as a far-ranging rejection of the status quo. A poll from November 2015 found 88% of Moldovan citizens were dissatisfied with the direction Moldova is headed, compared to 75% in April 2015. Meanwhile, Moldovans have become more wary of military cooperation—whether with NATO or the Russian-led Collective Security Treaty Organization.

Moldovans are increasingly supporting “outsider voices” not linked to the current government. Pro-European Moldovans upset with the current government have gravitated towards Maia Sandu, a former education minister. “Maia Sandu proved her character when she reformed the education ministry,” a university student told one researcher at an October 2015 protest. Voters in regional cities have cast their votes for wealthy businessmen, such as Renato Usatii in Balti, who have paid for some municipal services out of their own pockets.

More dramatically, Moldovan citizens have turned out in the streets in record numbers in the last year to demand an impartial investigation of the scandal, the resignation of the current government, and snap parliamentary elections. Although pro-European reformists and pro-Russian politicians have claimed leadership of the protest movement, protesters themselves have become increasingly wary of all Moldovan elites. One teacher from Ialoveni told Navanti she could not think of any “decent, honest, and trustworthy” people who could lead the country. The protests have subsided in recent months as Moldovan politicians position themselves for the upcoming presidential elections in October, but there is little indication that the discontent fueling the protests has diminished in the meantime.

The Unionist movement, which seeks to unite Moldova with neighboring Romania, is perhaps the most extreme rejection of the current status quo. Although Unionist activists point to Moldova’s cultural and historical ties to Romania—namely, a shared language and Moldova’s incorporation into Romania between the world wars—its supporters readily admit the banking scandal has given their message increased resonance. A Unionist supporter explained to our researchers that he does not support unification with Romania because of “blood ties” but rather because “the Moldovan government has failed its people.” Recent polling suggests about 20% of Moldovan citizens support unification with Romania, much to the ire of Russian speakers and pro-Russian politicians. As Romania is a member of the EU, a 28-year-old businessman from Chisinau told Navanti that “[Russia] might not allow Moldova to join Romania, and it could even lead to war.”

Still, for all of the political ferment, many young Moldovans have simply decided to leave. Long reliant on remittances to supplement their incomes, Moldovans continue to seek work opportunities abroad despite deep recession in Russia—their main source of remittances—and anemic growth across the EU. Faced with increasing restrictions against labor migration, many Moldovan citizens, such as an engineer from Straseni who spoke to Navanti researchers, are considering applying for permanent residency in Russia because “it’s getting too hard to work as a migrant.”

The long-term consequences of the banking scandal remain to be seen, but it is unlikely to lead to a convergence to the center in Moldovan politics and society. The current coalition in parliament, elected into office shortly before the revelation of the banking scandal, enjoys little legitimacy and even less popular support. Opposition parties are divided by personal rivalries no less than by geopolitics. The banking scandal has compounded Moldova’s traditional divisions between a Romanian-speaking heartland and Russian-speaking peripheries with open opposition between Moldova’s current elite and its increasingly beleaguered population. As a nearly evenly divided society, it is unlikely to move decisively towards Russia or the West. In the absence of substantive reforms, it will remain poor, fragmented, and a source of instability in an already volatile region.

Ultimately, the success of the United States’ efforts to contain Russian influence in Eastern Europe is unlikely to hinge on events in Moldova, but the banking scandal provides an opportunity to reevaluate American priorities in the region. For much of the last twenty-five years, United States policymakers have treated two distinct conversations—how post-communist governments identify themselves on the international stage and how they relate to their citizens—as a single problem. The quick succession of events from the Euromaidan movement of 2014 to the Russian annexation of Crimea reinforced this tendency.

However, the United States government runs the risk of alienating local populations by failing to recognize the difference between these conversations. In a region characterized by weak governing institutions, offering diplomatic support to pro-European governments quickly shades into support for the ruling coalitions comprising these governments. It is one thing for ruling elites to look to the West to safeguard their interests against an increasingly belligerent Russia, another to support judicial reforms and effective anti-corruption measures which could undermine their wealth and stature. If reform efforts falter absent any improvement in relations with Russia, the United States could find itself increasingly committed to the defense of governments lacking the support of their own citizens. Committed reformers throughout the region remain outmaneuvered, if not outnumbered, by politicians in search of IMF loans and western military cooperation. As Moldova’s recent experiences suggest, too much encouragement of the latter may well undermine the former.

Aleksei Lund is an Eastern Europe Analyst at Navanti Group, an analytics company based in Crystal City, Virginia. Before entering the private sector, he completed a Ph.D. in History at Stanford University.
More Articles
Published by the Lawfare Institute in Cooperation With