The Mexican government’s July murder numbers are out, and they are—in short—pretty grim. During July, more than 2,000 Mexicans were killed, which for context is 25 percent higher than last year and the most violent month in Enrique Peña Nieto’s presidency.

*For consistency since 2012, the graphed numbers show homicide reports instead of victims (as victim data begins in January 2014). Numbers are homicidios dolosos from the Secretariado Ejecutivo del Sistema Nacional de Seguridad Pública.

In a previous post, I outlined five hypotheses for why Mexico could be experiencing this spike in violence. And while ultimately, it’s extraordinarily difficult to know for sure what is going on, given the new data and recent news stories, it’s worth re-highlighting the role of an ascendant Cartel Jalisco Nueva Generación (CJNG) on the Mexican criminal scene.

Around 2010, the CJNG rose from the ashes of the shattered Milenio cartel, steadily gaining market share and power and

indulging in its penchant for sensational violence. In September 2011, the group dumped 35 bodies on a Veracruz street during rush hour and in May 2015, they downed a military helicopter in Jalisco with a rocket propelled grenade—killing at least seven soldiers and one federal police officer inside—and left a trail of burned out vehicles and murdered police officers throughout the state. The U.S. Treasury lists the group as “among the most powerful drug trafficking organizations in Mexico.”

In the past few days, the CJNG has once again reappeared in the news, after its gunmen brazenly kidnapped El Chapo’s son while he dined in Puerto Vallarta. (You can watch security camera video of the capture here.) Luckily for the kingpin’s son, he’s already been released—likely in exchange for some juicy Sinaloa cartel concession. But the CJNG’s other various territorial wars across the country show no signs of letting up.

One of these battle fronts is the central-Pacific state of Michoacán, with July marking the state’s deadliest month since at least 1997 (when government data begins). While there are various armed groups operating throughout Michoacán, CJNG is among the latest additions. In the past few months, the group has taken control of at least eleven municipalities in the state, and two of these newly captured zones—Apatzingán and Uruapan (populations of around 100,000 and 300,000 respectively)—saw a combined threefold uptick in deaths this month compared to last year, clocking in at 29 murders.

However, just like in any state, the violence is limited to a few hotspots. In the following graph, I’ve marked the Michoacan municipalities that had at least four reported deaths—most of which are situated near the 37D highway that links the Lázaro Cardenas port to the center of the state. You can click through the map to explore the number of deaths and murder rate per 100,000 residents for each of these municipalities. 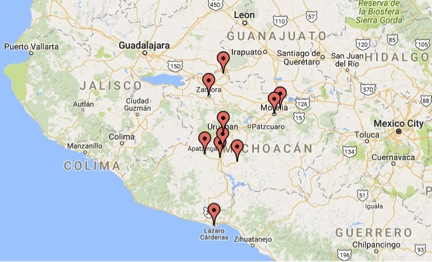 Another CJNG front is in Veracruz, where the criminal group has been battling the Zetas over territory. In June of this year, VICE news published an interview with a Zeta assassin that outlined the two groups’ rivalry and pointed a finger at narco-politics in the state. More specifically to this latter point, the assassin alleged that Fidel Herrera, Veracruz’s governor from 2004 to 2010, had supported the Zetas, while his successor Javier Duarte had backed the CJNG—fueling and worsening the two groups’ bloody conflict.

If these allegations are true and the narco and political worlds are overlapping, then there could be a political edge to this recent spike in Veracruz’s violence. Gubernatorial elections this past June brought in an opposition party governor, which could have created a moment of perceived opportunity or vulnerability for the Zetas and CJNG.

Either way, this past July was also Veracruz’s most violent month since January 1997, when government statistics begin.

For where these murders are taking place, the following map highlights the Veracruz municipalities that reported at least four homicides in July. 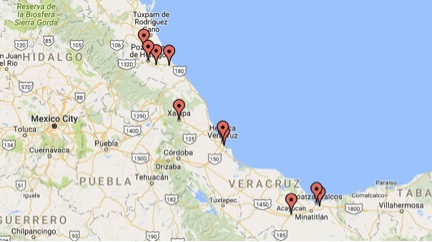 Finally, the tiny Pacific state of Colima remains ground zero for the CJNG’s fight against the Sinaloa cartel—which has been trying to snatch more land in Colima—and its allied Caballeros Templarios (Knights Templar) group. Analysts have pointed out how the criminal groups are fighting over the port of Manzanillo, which is the largest port on the Pacific coast and a gateway for incoming precursor chemicals for methamphetamines and outgoing drug shipments. The data backs this up, as Manzanillo reported 20 murders in July, a significant number for a city of just some 110,000 people.

These three states were not the only violent ones in July. For example, Guerrero and Baja California racked up their highest murder numbers since President Peña Nieto took office in December 2012. Others, like Estado de Mexico and Chihuahua, also maintained relatively high homicide rates, though well below previous highs.

Of course, all or even a majority of the violence cannot be attributed to any one cartel or to any one explanation—such as the major groups (or at least major-group backed gangs) fighting over land. Explaining why violence occurs in one place and not another is notoriously difficult, and it depends on more than cartel strategy; variables like institutional strength, political leadership, geography, climatic conditions, historical ties, and economic development, among other indicators, also come into play.

Yet, it’s clear that there seem to be power shifts—or at least attempts at power shifts—taking place across Mexico’s criminal landscape as various groups jockey for territory and power. And if the CJNG is behind even a small part of this violence, as the geographic patterns might suggest, then the group is increasingly positioning itself as a serious force in the criminal underworld and as a growing target in the Mexican government’s security bullseye.