This post is the second in a multipart series. For an introduction to the survey discussed and the methodology employed, be sure to read our first post.

Our last post presented the key findings of a public opinion survey that we conducted earlier this year as to the American public’s views on the use of force—specifically, that Americans are sensitive to considerations of necessity, proportionality, and congressional authorization when evaluating whether the use of force is a justified response to a military threat from a foreign country. These same considerations are key to determining whether a given use of force is lawful under both domestic and international law. For this reason, we posited then that U.S. public opinion may align with—and thereby help reinforce—certain legal restrictions on the use of force.

But what if the threat in question isn’t a conventional military one?

Many policymakers and scholars argue that, when facing the immense and sudden threat posed by modern weapons of mass destruction, the circumstances in which the use of force is lawful and appropriate can change. Advocates of this view have advanced preemptive and even preventive theories of self-defense under international law, which would authorize the use of force against such threats even where the threat is far less imminent and the response less proportional than would be required for similar action against conventional military threats. Certain aspects of these theories have in turn arguably found their way into U.S. national security doctrine. Indeed, the current U.S. national security advisor, John Bolton, has made just such an argument in defending the legality of a strike against North Korea.

To test the effect of nuclear threats on how the American public views the legitimacy of the use of force, we introduced variants of the four questions we discussed in our prior post. Like the original four questions, each asks whether the United States would be justified in using force—either military or nuclear, and with or without congressional authorization—in response to a particular set of actions by a foreign country. In each of these four variants, however, the actions of the foreign country relate to a possible nuclear threat against the United States, as opposed to the conventional military threat we addressed in our previous post. Below is a sample question taken directly from our Google Survey results: 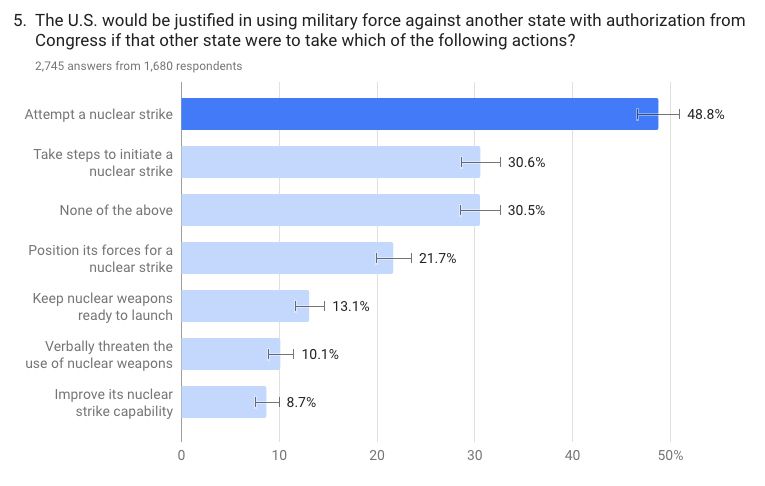 Interestingly, the introduction of a nuclear threat appears to have made respondents only slightly more likely to view the use of military force—with or without congressional authorization—as justified than they were in response to a conventional military threat: 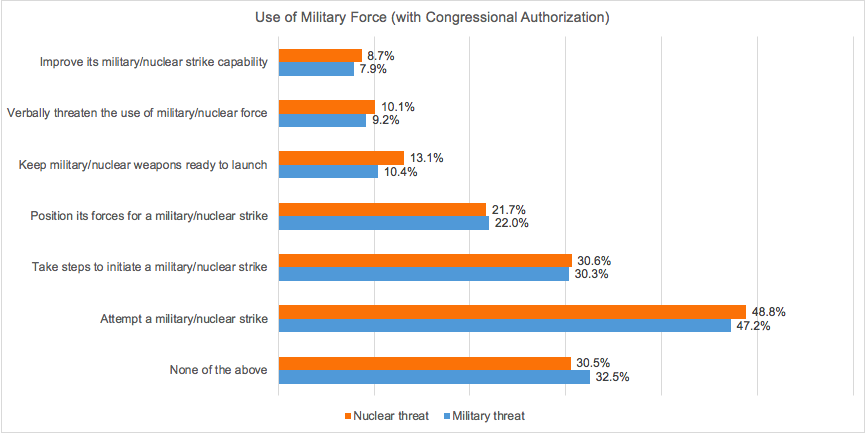 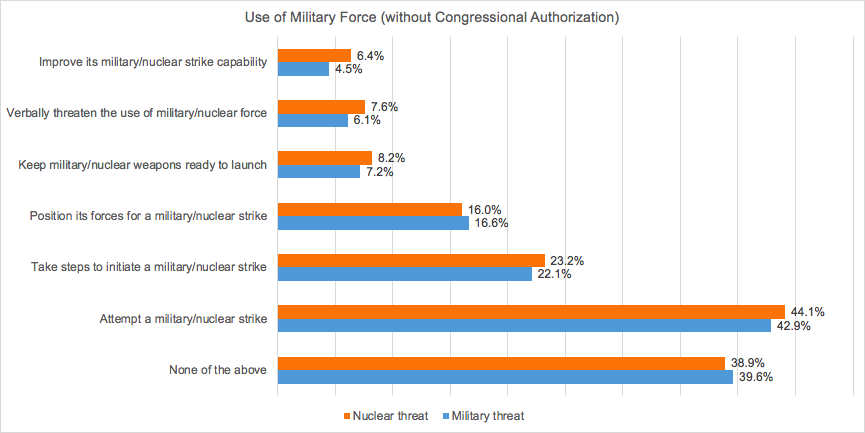 In most of the scenarios presented (other than “None of the above”), between zero percent and three percent more respondents viewed the use of military force as justified where the threat posed is a nuclear one. The sole exception is when a foreign country “[p]osition[s] its forces for a nuclear strike“ in which case respondents were marginally less likely to view the use of force as justified than in response to a conventional military threat. The reason why is unclear. The differences in these responses, however, are small—so small, in fact, that most are within the combined margins of error for the two responses being compared. For this reason, these small differences are less notable than the similarities: in short, respondents’ views on whether the use of force was justified did not substantially change just because the threat in question was nuclear in nature.

This is decidedly not the case, however, when it comes to the United States’s own use of nuclear weapons. Respondents were substantially more likely to view U.S. use of nuclear force as justified in response to a nuclear threat: 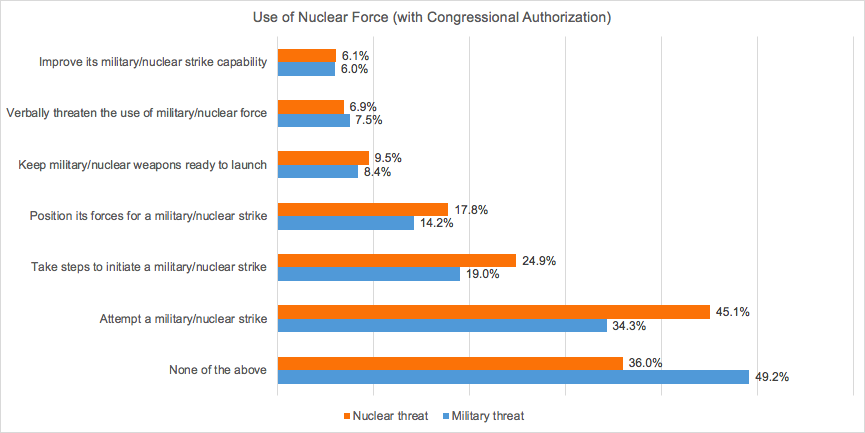 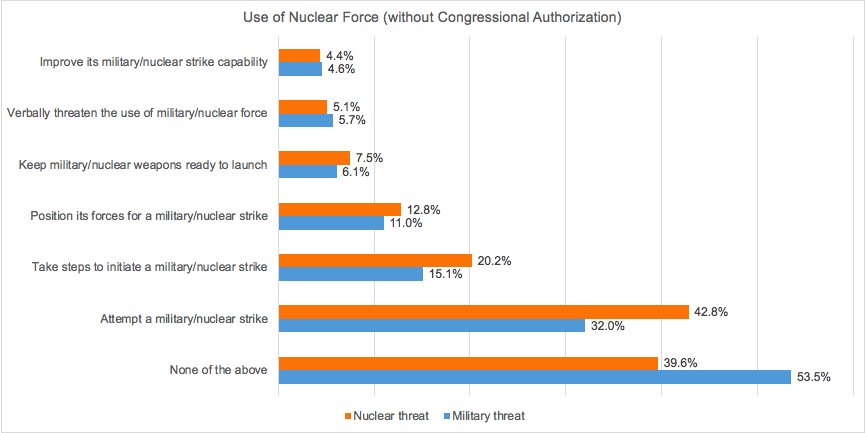 This trend, however, was not consistent across all the different circumstances described. Instead, the number of respondents who viewed the use of nuclear weapons as more justified when in response to a nuclear threat than a conventional military threat declined as the threat posed became less imminent. For example, 42.8 percent of the respondents saw the United States’ use of nuclear weapons as justified where a foreign country “attempt[s] a nuclear strike,” while only 32.0 percent saw the use of nuclear weapons as justified when an adversary “attempt[s] a military strike.” But by the point that a foreign country simply “[i]mprove[s] its [military/nuclear] strike capability” or “[v]erbally threaten[s] the use of [military/nuclear] force[,]” this difference shrinks to a narrow range that is well within the margins of error for the surveys being compared, with only a few respondents assessing that either a military or nuclear strike would be legitimate. This pattern appears regardless of whether the use of nuclear force in question is congressionally authorized.

What can we make of these results? At a minimum, they show little public support for the proposition that the threat posed by nuclear weapons justifies preemptive or preventive uses of force in ways that conventional military threats do not. If public opinion aligned with justifications for preemptive or preventive force, one would expect far more respondents to view the use of force as justified when in response to nuclear threats--even in circumstances where the threat in question is less-than imminent, such as when an adversary keeps nuclear weapons ready to launch. Instead, our results showed that respondents’ views regarding when the United States is justified in using military force were almost identical regardless of whether the threat posed was military or nuclear in nature.

Yet our results do say something interesting about how respondents viewed nuclear weapons differently from conventional weapons. Asked about scenarios in which the United States faced a conventional military threat, respondents were substantially less likely to perceive U.S. use of nuclear weapons as justified compared to the use of conventional military force, no matter the level of imminence. Yet when the threat posed was nuclear in nature, the gap narrowed between approval of the use of nuclear force and approval of the use of military force. Comparing the responses to all eight of our different survey questions side-by-side underscores this point:

In sum, our survey showed that public intuition lends limited support to theories that the unique threat posed by nuclear weapons should lead to expanded definitions of when preemptive or preventive self-defense is legally justified. The American public may still find such arguments appealing in certain circumstances, but it seems unlikely that this will be primarily because of a nexus with a nuclear threat. Nuclear threats do, however, affect how the American public views the United States’ own use of nuclear weapons. This in turn may help shape or reinforce aspects of U.S. nuclear doctrine not related to legal restrictions, including the question of first use.

A brief note on methodology: As we discussed at length in our prior post, our results came from a weighted population of 1,000 online respondents, taken from an initial pool of over 11,000. The Google Surveys platform in turn weights the results to proportionally represent the U.S. population of adult (i.e., 18 or over) internet users according to their inferred age, gender, and location. Our final results had a margin of error of no more than +/- 2.6 percent for each response, and often substantially less. That said, there remained some notable limitations. In particular, Google Surveys restrictions on the format and content of survey questions limited our ability to ask more detailed or nuanced questions regarding the use of force and its consequences (e.g., the level of civilian casualties). Finally, readers should note that the scope of our survey is intentionally limited in that we chose to focus on responses to imminent threats from existing nuclear programs. We chose not to address the use of pre-emptive or preventive force in order to prevent or destroy foreign countries’ nuclear capacities, among other subjects, as this would have required substantial changes to our survey design.

In our next post, we will move on from generic hypotheticals to see how the American public’s views of certain specific actors—including President Trump and the country of North Korea—affect its opinions on the use of force.