Vladymyr Khlepitko and Yana Marek at a pro-Ukraine rally in Donetsk on March 4, 2014. The sign says—in Russian, not in Ukrainian—“Donetsk: This is Ukraine.”

Vladymyr Khlepitko and his fiancée Yana Marek look like a normal couple sitting outside the Boulangerie Artisan café in downtown Kyiv. Two trendy young Ukrainians sipping lemonades in the hot summer sun, discussing chess and graphic design classes. But the backpacks slipped behind their chairs reveal their other life. They are two of the more than 1.3 million Ukrainians uprooted and displaced by their country’s current turmoil.

Vladymyr and Yana are quite literally carrying their lives on their backs.

Since Russia annexed Crimea in March 2014 and began backing separatists groups in eastern Ukraine, waves of displaced Ukrainians have arrived in cities across the country. Even now—after two ceasefire agreements—the fighting along the eastern front remains constant, forcing Ukrainians located near the shelling to close up their homes, pack their belongings, and move away. Between June 26 and July 13 of this year alone, for example, some 24,000 Ukrainians fled to safety.

Today, the number of Ukrainians displaced totals more than in either Afghanistan or Somalia (though the Afghan wars at their height produced gigantic refugee flows and Syria these days is in a league of its own). Yet discussions surrounding the conflict do not always include these Ukrainians who move away from the fighting. Displaced Ukrainians, unlike Syrians, don’t live in squalid United Nations refugee camps: family members’ households around the country tend to absorb them, with the vast majority remaining in the East. Yet their lack of visibility does not make their situation any less real.

“The Ukrainian conflict is not just politics, it is a humanitarian crisis of considerable size that should not be overlooked,” explains Manfred Profazi, head of the Mission in Ukraine at the International Organization for Migration (IOM). “For displaced Ukrainians, there is no certainty nor any prospect for the future. How will you feed your family or reunite with those people who stayed behind?”

Vladymyr and Yana’s story began in Donetsk, an eastern part of the country now under Russian backed separatists’ control. The two were working together in news broadcasting, and Vladymyr taught chess classes at a local school. They hoped to get married in the spring of 2015.

Then a fateful bus ride last January derailed their plans.

The couple was returning from a visit to Kyiv to spend time with Yana’s mother, when their overcrowded bus approached a checkpoint. Before the couple could ready their passports, the bus suddenly began to shake. Then, as Vladymyr explains, “Boom, Boom, Boom,” the air blurred and the windows shattered. When the vibrations stopped, the lifeless bodies of ten Ukrainians lay dangling from seats and sprawled across the aisles. Three more died soon after. 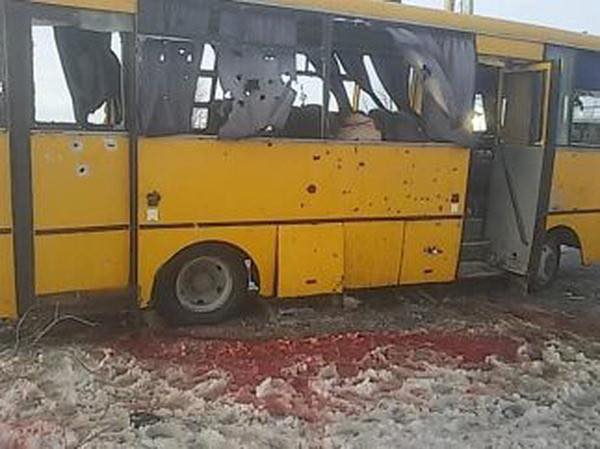 Depending on whether you choose the Ukrainian or Russian narrative, the bus was either shelled (the Ukrainian version) or ran over a landmine (the Russian version). The incident sparked considerable local and international press: including this article in the Kyiv Post and this write up for the BBC. You can even watch videos from the checkpoint here.

Vladymyr and Yana believe they were hit with separatist shells, and Vladymyr still bears scars on his hand and head from the blast. They also both knew that in that part of the country, this could happen again and they would not be so lucky. They decided to return to Kyiv and have been there ever since. (Special thanks to Irina Bugera for her simultaneous translation of this interview.)

There was another reason for their decision: subtle harassment that they faced over photographs taken at a pro-Ukraine rally in Donetsk last year (including the picture above). As they tell the story, strangers began to ask their relatives prying questions soon after the photographs were published, including, more recently, when they might be returning to the East.

Vladymyr and Yana have stayed in fourteen different places since they arrived in Kyiv. And when we met, the couple still had not found a steady apartment—only finding a place for the previous night at 10pm (it was a friend’s apartment). “We don’t need much, just a room somewhere,” Yana explains, “something around 1,500 hryvnia (US$67) a month.” That coming night, Vladymyr was heading to a hostel, where another friend had purchased three nights for him. Yana (who is finishing up her graphic design degree in Kyiv) was going to stay in the room her mother rents outside the city center.

This is typical. The biggest problem for many of the Ukrainians starting anew is finding employment. International NGO Luganske Zemliatstvo has counted 100,000 unemployed displaced Ukrainians, more than three times the number put forth by the Ministry of Social Policy. Vadym Goran, head of Luganske Zemliatstvo, points to a skills mismatch. “In Kyiv potential employers are ready to offer internally displaced Ukrainians mostly unqualified positions, watchmen, couriers, or security guards… but the vast majority of the displaced have higher education and good working experience, including experience as top managers.”

Vladymyr agrees. He explains that often, people don’t think about internally displaced people as teachers, doctors, or other highly qualified professionals. He worries less that these talented individuals will stay permanently unemployed, more that they may soon head abroad—robbing Ukraine of its best and brightest. “Ukraine is ready for a Marshall Plan,” he says when asked how the international community can help.

Some local groups have tried to lend a hand in getting displaced Ukrainians back on their feet and into the workforce. A few weeks ago, Free Press Ukraine held a workshop for training interested Ukrainians in television journalism techniques. Among the seven participants in the three-day course were two displaced: one from Crimea and the other from the East. “We originally had two spaces allotted for them, where they wouldn’t have to pay the workshop fee,” said Julia Mendel, president of Free Press Ukraine. “Though, fortunately we were ultimately able to make it free for everyone.”

Housing is also a serious issue. An estimated 30,000 to 40,000 displaced Ukrainians live in collective centers, unable to find a permanent place to live. Compounding the problem is that almost three quarters of the displaced are pensioners, children, or disabled Ukrainians, who may not have significant savings or support networks in their new areas. A government resolution aimed to support these vulnerable groups offers free housing for up to six months—though humanitarian groups still report difficulties in its implementation.

Vladymyr’s health did not aid the search for a permanent housing solution. A month and half after arriving in Kyiv, Vladymyr began suffering from severe ringing in his ears. When he finally went to the hospital, the doctors discovered shrapnel from the bus explosion lodged in his skull. He underwent immediate surgery, and spent the next two months recovering and largely immobile. With their savings wiped out, the couple postponed their wedding.

The government had promised compensation money and medical treatment to the bus explosion survivors (and even claimed to have delivered it), but Yana and Vladymyr swear it never materialized. Rather, the couple says that they were forced to rely largely on the generosity of friends and relatives for everything from medicine, their travel back to Kyiv, and winter clothes. “It’s very hard to start from a blank page,” says Vladymyr, “it makes your realize the things you need to live—even silverware—things that you never even noticed before.”

During his recovery, Vladymyr took solace in playing chess. He lights up when discussing his passion, and its recent transition into a business venture, as he opened Wisdom Chess Club last month in the basement of a Kyiv cafe. The couple has big plans for the club. Charging a monthly membership fee or $60 hryvnia an hour (US$3), they hope to earn enough money to get by and pay for their housing as business picks up.

It is getting late in the afternoon, but Vladymyr and Yana are still flipping through Facebook photos, proudly showing off the beautiful wooden chess sets made possible by a generous private donation. Yet, even among the happy pictures, the couple’s difficult reality creeps in. “You can’t call this living,” Vladymyr sighs, “we are just surviving.”