The United Nations this week said it is “deeply alarmed” by the situation in the northern Syrian city of Aleppo. The battle for Castello Road, which connects Aleppo to Turkey and is the key entry point into eastern Aleppo for all cross-border humanitarian aid, is one of heavy consequence. For months, the road has faced constant shelling and sniping by government forces backed by Russian aerial bombardment. With military advances by Syrian government forces this past week (despite a 72 hour ceasefire), Castello Road has been all but sealed. Aleppo is effectively under siege.

The term “siege” seems antiquated, but siege has been occurring in Syria since the outset of the conflict. It was a tactic employed by President Hafez al-Assad, the current Syrian president’s father, against Palestinian refugees during Lebanon’s civil war, and Hafez’s son Bashar has more than filled his father’s shoes. My family’s hometown Homs, the third largest city in Syria, was among the first to face the Syrian government’s “kneel or starve” strategy. After three years, the people of Homs were reduced to eating cats and grass to survive until opposition forces withdrew in 2014. The Yarmouk camp in Damascus, home to at least 160,000 Palestinian refugees before the Syrian conflict, notoriously faced a siege by the Syrian government followed by Islamic State forces from 2013 through 2015. This now infamous image of Yarmouk residents lining up for a UNRWA aid delivery should be the thumbnail image for siege in Syria: 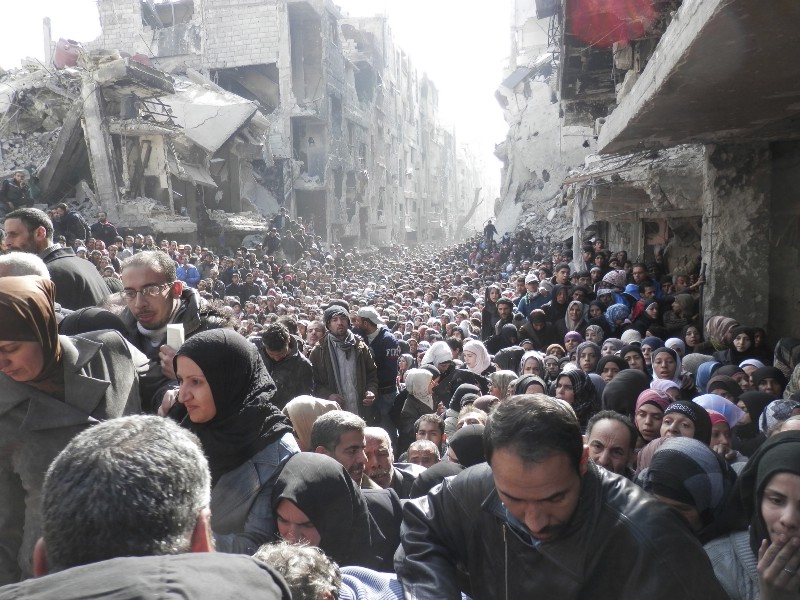 Aleppo, once a commercial hub of the Middle East, is currently divided into east and west. About 1.85 million people reside in Aleppo City, with 1.5 million in the government-controlled west and at least 300,000 in the opposition-held east. The government-controlled side has dealt with civilian casualties from mortar fire and the obstruction of the water pipeline from the Euphrates River by various opposition forces. But according to Physicians for Human Rights (PHR), conditions in east Aleppo are far more dire, with the area encircled by both the regime and, farther to the east, the Islamic State.

Compare and contrast these open source maps from online Syria watchers, from June to July: 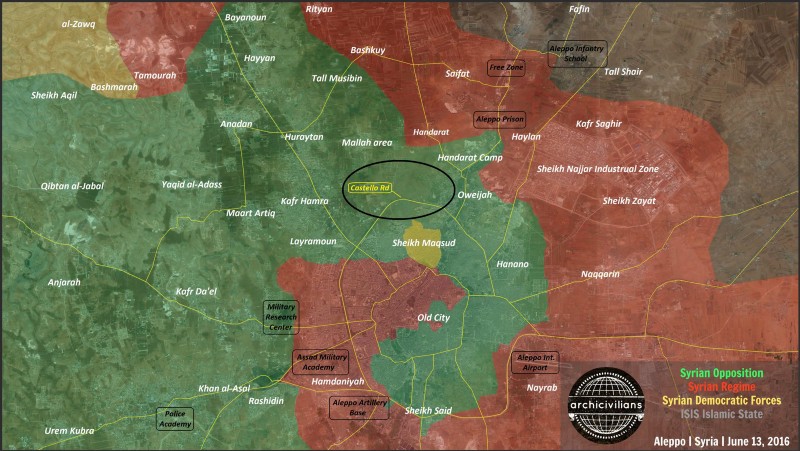 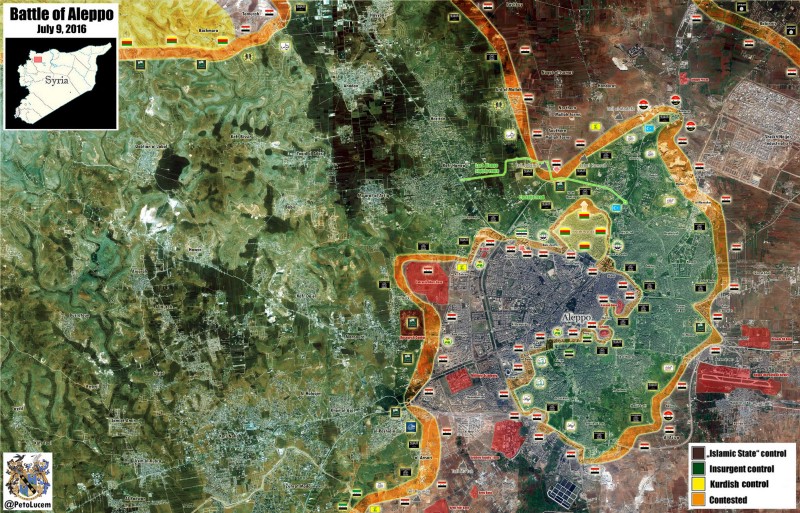 Siege or not, in 2015, half of the Syrian population was deemed food insecure by the World Food Program (WFP) and two-thirds lived in extreme poverty per the UN Development Program (UNDP). With extreme inflation of the Syrian pound ($1 = 505 SP) and daily goods such as a crate of eggs costing 675 SP, the Syrian average 20,000 SP annual salary became unlivable. Add to that the layer of hardship brought by siege—not being able to bring in flour, limited ability to farm or import food, a network of profiteers hiking up the prices—and the neighborhood produce market starts to look like this: 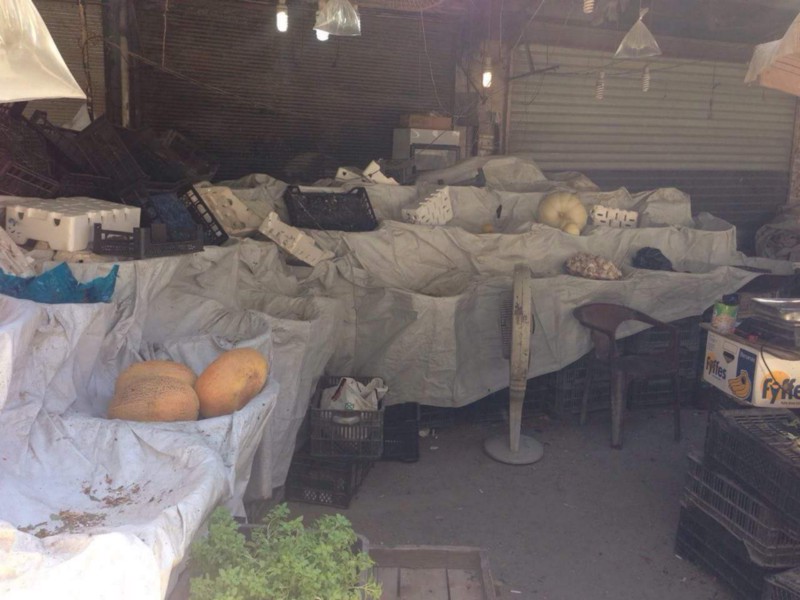 photo provided by a friend of the author in East Aleppo, July 2016

East Aleppo is subject to aerial bombardment by regime and Russian air forces in the form of barrel bombs and explosive hoses, air-to-surface missiles, and white phosphorus. Human Rights Watch has also reported that the Syrian government and Russia have used cluster munitions, illegal under international law for their indiscriminate nature. However, indiscriminate bombing, such as the dropping of barrel bombs (which are exactly what they sound like — barrels filled with TNT and shrapnel and dropped from a helicopter), and the use of internationally outlawed weaponry, such as the systematic use of chemical weapons, are not new tactics for the Syrian government and its supporters. Between April 22 and June 8, aerial bombardment killed over 560 in east Aleppo, according to the Syrian Observatory for Human Rights (SOHR).

Behind every indiscriminate attack is a calculated attempt to displace, terrorize, and bring a population to its knees. Killing doctors, for instance, is a sure way to inflict psychological terror upon a population and convince a family to leave. Simply, no one wants to risk getting injured if there’s no doctor in the area. Ben Taub detailed the systematic nature of these attacks in his piece for The New Yorker:

In the past five years, the Syrian government has assassinated, bombed, and tortured to death almost seven hundred medical personnel, according to Physicians for Human Rights[.]

According to the Syrian American Medical Society (SAMS), in June alone, there were 22 attacks on SAMS or SAMS-sponsored medical facilities , resulting in 2 medical staff and 20 civilians in the vicinity killed. 11 of the attacks were in Aleppo , with  the majority of air-to-surface attacks conducted by the Russian air force, save for one reported white phosphorus attack on the Al-Huda Hospital in Aleppo. On April 27, the last pediatrician in east Aleppo, Dr. Mohammed Wasim Moaz, was killed in a Russian or Syrian regime bombardment of the Al-Quds Hospital — a SAMS facility. 50 others died in that attack. Before the conflict, there was 1 doctor for every 850 people in Aleppo. In east Aleppo today, there are approximately 50 doctors left: 6,000 extremely vulnerable people to one doctor.

With Castello Road inaccessible, international and Syrian NGOs will struggle even more to provide humanitarian services the people of Aleppo. What hope remains in the delivery of aid lies with the United Nations. But according to the sovereignty rules under which the UN operates, UN interagency delivery convoys,in addition to the Syrian Arab Red Crescent, are beholden to the sovereign government’s discretion.

In this case, the sovereign government is the Syrian government. However, according to UN Special Envoy for Syria Staffan de Mistura, as well as UN OCHA, the Syrian government continues to limit, alter, and obstruct the movements of the aid convoys, hindering the delivery of critical medical and food supplies. In June, of the 34 proposed UN humanitarian convoy delivery locations, the Syrian government approved 18, agreed to 13 with adjustments to the type of aid, and rejected 3. Among those approved was a delivery to the town of Daraya in suburban Damascus, which received its first aid convoy since it was besieged by the regime in 2012. It was bombed heavily shortly thereafter. In Madaya, another suburb of Damascus, 65 people have died of starvation and malnutrition between July 2015 and May 2016.

Here’s the kicker: the UN is far behind in calculating and classifying besieged populations. According to UN OCHA, as of June 23, 2016, there are 5.47 million Syrians in hard-to-reach areas, including 590,200 in 18 besieged locations. Siege Watch, a collaboration between PAX and the Syria Institute which monitors sieges in Syria, places the number of people living under siege well over 1 million in 52 besieged communities. International and Syrian NGO estimates place the number of besieged people in Syria over 1 million, with Doctors Without Borders reporting 1.9 million this February.

And now with east Aleppo, there are at least 300,000 more people who are facing starvation. Since January 2016, east Aleppo has been on Siege Watch’s “watchlist” of areas at risk of being under siege. As of last week’s Castello developments, that designation is set to be elevated.

The UN needs to better represent the number of besieged Syrians and to have a more sober view of the work it is accomplishing. Some, such as The Syria Campaign, have reported that the UN has helped enable the Syrian government’s siege tactics, with the government allegedly siphoning off the majority of the aid for government-controlled areas in order to maintain the regime’s legitimacy. The Syria Campaign goes so far as to say that the UN has abandoned neutrality in allowing this to happen.

Sadly, the international community, with U.S. President Barack Obama at its helm, has opted for the path of more cooperation with Russia. This plan may very well lead to more civilian deaths and no accountability for Russia’s strategic indiscretion--and many in the Pentagon agree. The lack of accountability and enforcement of UN Security Council Resolutions 2139, 2165, and 2191, which call for unhindered humanitarian access and cross-line access, signals a failure of the international community.

As recently murdered Labour MP Jo Cox remarked, “If we don’t see aid getting in by road or by air, then we’ve reached a new low making empty promises to starving children.” With Castello Road inaccessible and cross-border aid into Aleppo nearly impossible, the Syrian people can only depend on the UN, which is only as effective as the party enforcing the siege allows it to be. If cross-border aid from international and Syrian NGOs cannot reach Aleppo, then we should all fear the worst.

We are witnessing the death of a great city. 21 years ago, the massacre of over 8,000 Bosnians by Serbia in Srebrenica brought President Bill Clinton to act to end the war in the Balkans. Today, 300,000 people in east Aleppo and over 1.5 million besieged Syrians are being massacred slowly, and the world lacks imagination.

Adham Sahloul is a foreign policy professional and is a contributor to the Center for Global Policy. He has worked for the Atlantic Council and the Brookings Institution, and holds a master’s degree in international relations from the Fletcher School of Law and Diplomacy. His work has been published by Foreign Affairs, Axios, The Diplomat, and the Middle East Institute.
More Articles
Published by the Lawfare Institute in Cooperation With