A few years ago, it seemed that Mexico’s security challenges were everywhere. They were featured on CNN, in Time Magazine, and in the agendas of most bilateral meetings.

But over the past few years, the spotlight on Mexico’s security crisis has dimmed.

There are several possible reasons. It could be that U.S. and Mexican news cycles have diversified their coverage, focusing on other issues, like economic reform and corruption. It could be that journalists or think tankers burnt out on the issue. Or it could be that domestic sensitivities such as immigration or border security have successfully sucked the air out of the room. It could be a combination of all three.

But one thing’s for sure: it’s not because the nationwide murder rate in Mexico is looking significantly better.

Let’s take a look at the numbers.

This past May was Mexico’s most violent month since September 2012, clocking in with an astonishing 1,895 homicides (using the government’s victim count). This is about the same number of murders as when President Enrique Peña Nieto took office in December 2012, although still short of the country’s bloodiest months under former President Felipe Calderón.

Yet what is surprising about the recent uptick in violence is that is not localized to one city or state. In the first six months of 2016, twenty-one Mexican states (out of a total of thirty-three) recorded more murders than in the year before.

The following map provides a visual depiction of murder upticks color-coded by intensity (the darker the state, the greater the increase): 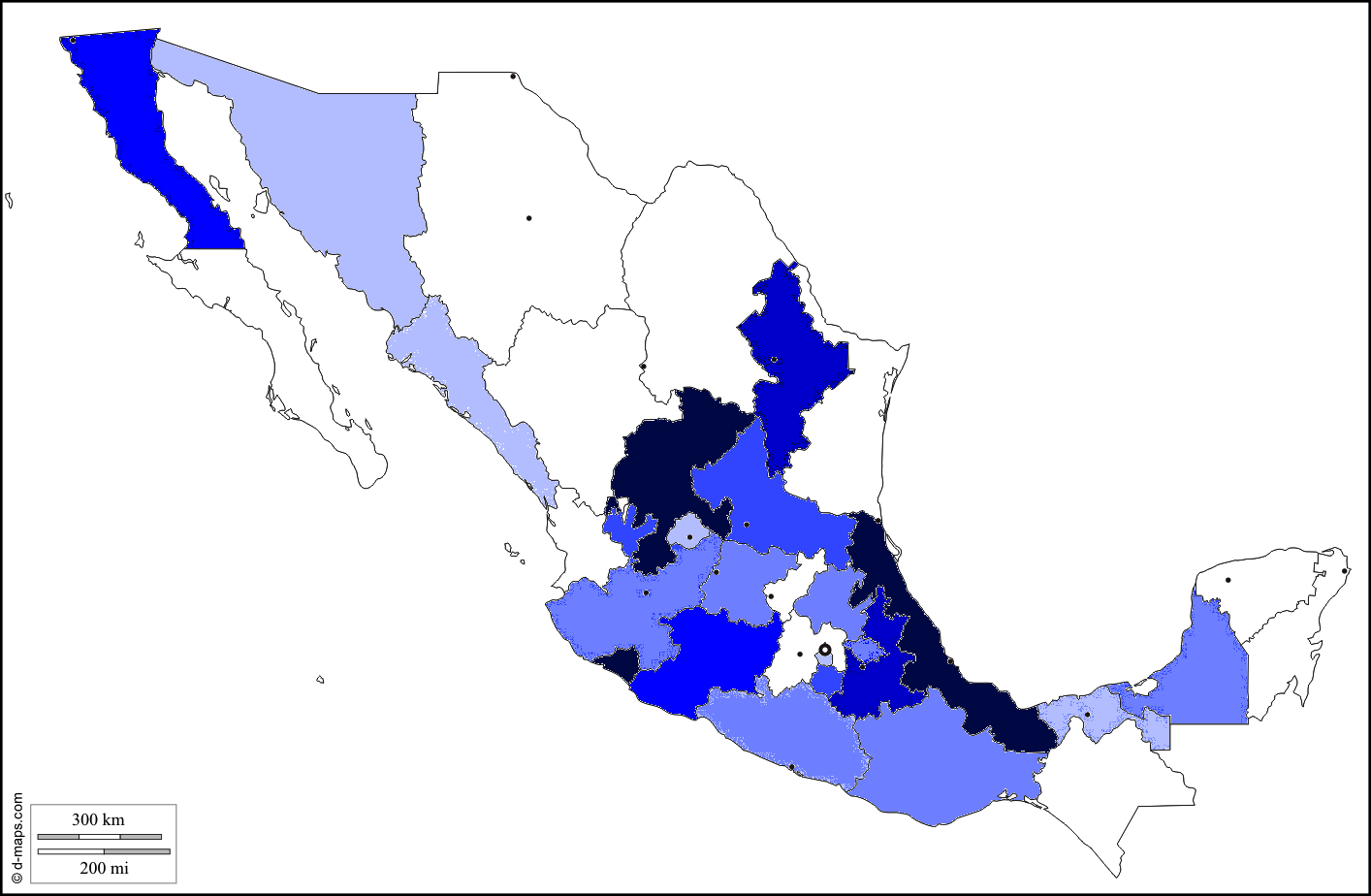 To help explain this year’s violence, I spoke with security analyst Alejandro Hope, who outlined five hypotheses to explain the recent uptick. I’ve listed his theories below and provided some background information to put them into context.

Since 2007, the Mexican government has more aggressively targeted cartel leadership, effectively using the so-called kingpin approach to decapitate criminal groups. Former President Calderón killed or captured 25 of his 37 most wanted narcos and current President Peña Nieto has already “neutralized” 100 of his top 122. Such blows may weaken Mexico’s criminal groups, but they don’t mean less bloodshed. Often, it’s the opposite.

Each downed kingpin means a leadership succession, frequently characterized by power vacuums, internal struggles, and splinter groups. When Calderón took office in 2007, there were five recognized cartels. Today, if you take the Attorney General’s count, there are nine cartels and forty-three fragmented cells, or if you prefer to listen to Mexico’s chief criminal prosecutor, it’s two cartels and hundreds of splinter groups.

Either way, with each additional actor on the fractured criminal landscape, there is another set of armed criminals trying to enforce its rules over a slice of land. And there are the inevitable bloody clashes when those frontiers overlap.

Hypothesis #2: Open Warfare Between the Sinaloa Cartel and the Jalisco New Generation Cartel

The Sinaloa Cartel is one of Mexico’s biggest cartels, formerly headed by escape artist extraordinaire El Chapo. Over the years, its network of rivals has continuously shifted, but it now faces outright warfare with the upstart Jalisco New Generation Cartel (CJNG).

This CJNG isn’t Mexico’s best-known cartel. That distinction perhaps goes to Los Zetas. But it is one of Mexico’s most powerful groups—bursting onto the criminal scene in 2010 to now operate in eight states around the country.

The CJNG and the Sinaloa Cartel have been clashing over territory for at least a year now, but gruesome videos and narco messages (called narcomantas) suggest that these clashes have erupted into open warfare. Ground Zero in the war seems to be the small Pacific state of Colima, helping to explain the state’s 300 percent increase in homicides over the past year.

Hypothesis #3: The Sinaloa Cartel in a Post-El Chapo Era

This is a more specific example of Hypothesis #1, as the two-time capture of El Chapo led to a leadership succession within the Sinaloa Cartel. The results have been internal and external clashes.

This past June, armed men—rumored to be associated with the rival Beltran Leyva Cartel—decided that it was an opportune time to make an incursion on Sinaloa territory. Their target was the residence of El Chapo’s mother in La Tuna, Sinaloa. The men rampaged into the small town, executing men in the street, burning down houses, and terrorizing the population. The state of Chihuahua may soon see something similar, with rumors that the Beltran Leyva Cartel is also launching an offensive there against the Sinaloa Cartel.

The United States’ ongoing heroin epidemic is another factor driving Mexico’s violence. This alarming U.S. trend—with heroin overdoses soaring from 1,842 in 2000 to 10,574 in 2014—comes from prescription drug addicts turning to cheap heroin to supplement their highs.

As Mexico produces roughly half of U.S.-consumed heroin, the epidemic is creating ripples across poppy-producing regions. While the transnational cartels control heroin trafficking logistics, much of the actual poppy production is outsourced to smaller groups, which end up violently jockeying over the increasingly lucrative market.

This leads to the last hypothesis, which is, simply put, that we haven’t been looking at Mexico’s violence in the right way. From 2008 to 2012, Monterrey and Ciudad Juárez went through extreme spasms of violence—with murders in the two states of Nuevo Leon and Chihuahua totaling an average of 20 percent of Mexico's total homicides each year.

As relative peace took hold in these cities after 2012—attributed to a combination of local police reform, public policies, and cartel ceasefires—their falling murder rates were reflected across nationwide homicide numbers. This decline perhaps gave us the false sense that Mexico’s security fundamentals were improving across the country, when what we were seeing was largely a more localized phenomena.

I’m not sure what numbers his speechwriters were using, but they are most certainly not the numbers that the government itself releases every month. Don’t take my word for it—you can count them yourself in this PDF. It’s not 60 percent; it’s more of a 15 percent decline in absolute numbers.

This seems too extreme of a number to be an intentional manipulation and perhaps it was human error, even if this administration's officials have a history of being in denial. But, regardless, the error raises a troubling question: Has no one been paying enough attention to murders to instinctively realize just how wrong the number was?