Editor’s note: This piece has been updated to reflect corrected climate survey responses we received from the FBI earlier today.

Here’s a dog-bites-man story: Amidst near constant presidential attacks on FBI officials, accusations of treason, congressional investigation, and suggestions of “deep state” malfeasance, morale is up at the FBI.

That’s the surprising lesson from this year’s FBI Climate Survey, a yearly document produced by the bureau with an array of metrics, across both headquarters and the FBI’s 56 field offices, documenting how employees feel about the bureau, its leadership and the value of their work. Two of us (Anderson and Wittes) sought the data from this year’s climate survey and litigated to get it, gamely represented by our friends at Protect Democracy. We were expecting that it would show continued erosion of morale. Last year’s data showed a sharp dive in confidence in the FBI’s leadership, with folks in the counterintelligence division particularly upset. In the wake of James Comey’s firing as FBI director, Andrew McCabe’s firing as deputy director, Peter Strzok’s dismissal and a constant drumbeat of negative attention from Trump-friendly media. That drumbeat has continued in the year since--and we were frankly expecting more slippage in support.

But the last year has turned out to be good for most of the bureau, at least as measured by the esprit de corps of the workforce. The counterintelligence division, however, stands out as something of an exception.

Each climate survey asks all FBI employees to respond to more than 100 individual questions addressing different aspects of their relationship with their work and the FBI more broadly. FBI employees are asked to indicate the extent to which they agree with various statements with a numerical ranking between 1 and 5, which reflects the worst to the best response from the perspective of the institution.The survey inverts the responses for some questions that are framed negatively—such as “I am burned out”—in order to maintain this scale. No matter how the question is worded, 5 is always the best answer for the FBI and 1 is always the worst in the results. The FBI views scores of 3.81 or higher as indicative of “success in those areas,” while scores between 3 and 3.80 reflect “positive feedback . . . with potential for improvement” and scores of 2.99 or lower indicate “potential areas of concern” where “development . . . would be recommended.”

Here is the entirety of the bureau’s original production to us:

While many of the survey questions provide insight into FBI employees’ morale and confidence in their leadership, we identified last year eight questions before that year’s results that we thought would particularly illuminate the bureau’s overall mood. These questions asked the extent to which respondents agreed with the following statements:

The first three of these questions are general measures of morale that capture the manner in which employees view their relationship with the FBI as a whole.

The next five, meanwhile, relate specifically to employee perceptions of and relationships with the FBI director and other senior leadership. Aside from minor non-substantive wording changes and the apparent omission of the “direct communications” question from the 2015 climate survey, the first seven questions had all been included in the five previous climate surveys prior to 2018. The eighth question, meanwhile, was added to the 2016 climate survey in a slightly different form: “I’m on board with the Director’s vision and ideas.” It was changed to “I am inspired by the Director’s vision and leadership” in the 2017 climate survey. The 2018 survey omitted the question on employee morale but otherwise retained the wording of the remaining seven questions from the 2017 climate survey. This year’s survey did the same..

The results last year showed that FBI employees remained proud to work for the bureau and looked forward to going into work; responses for those questions, along with a query regarding the respondent’s cynicism toward the FBI, remained more or less static from 2017 and in some cases improved. Confidence in leadership, however, declined from 2017 to 2018—in some instances quite sharply. While trends remained consistent across different divisions of FBI headquarters and field offices alike, the counterintelligence division—the corner of the FBI most closely linked to the Russia investigation—saw a drop of 0.87 points as to whether respondents were “inspired by the Director’s vision and leadership.” Overall, while far from a worst-case scenario, the results were not exactly good news for FBI Director Christopher Wray.

This year, by contrast, shows modest recovery, pretty much across the board. The results for each climate survey provide detailed responses for individual FBI field offices and administrative components, as well as two sets of aggregate numbers: one for the field offices as a whole and one for FBI headquarters in Washington, D.C. (which is separate from the Washington, D.C., field office).

At FBI headquarters, scores are up across all seven questions, save for a flat performance on “I look forward to going to work” and continued—though slowing—decline on “Direct communications from the Director help me feel connected to the FBI.” 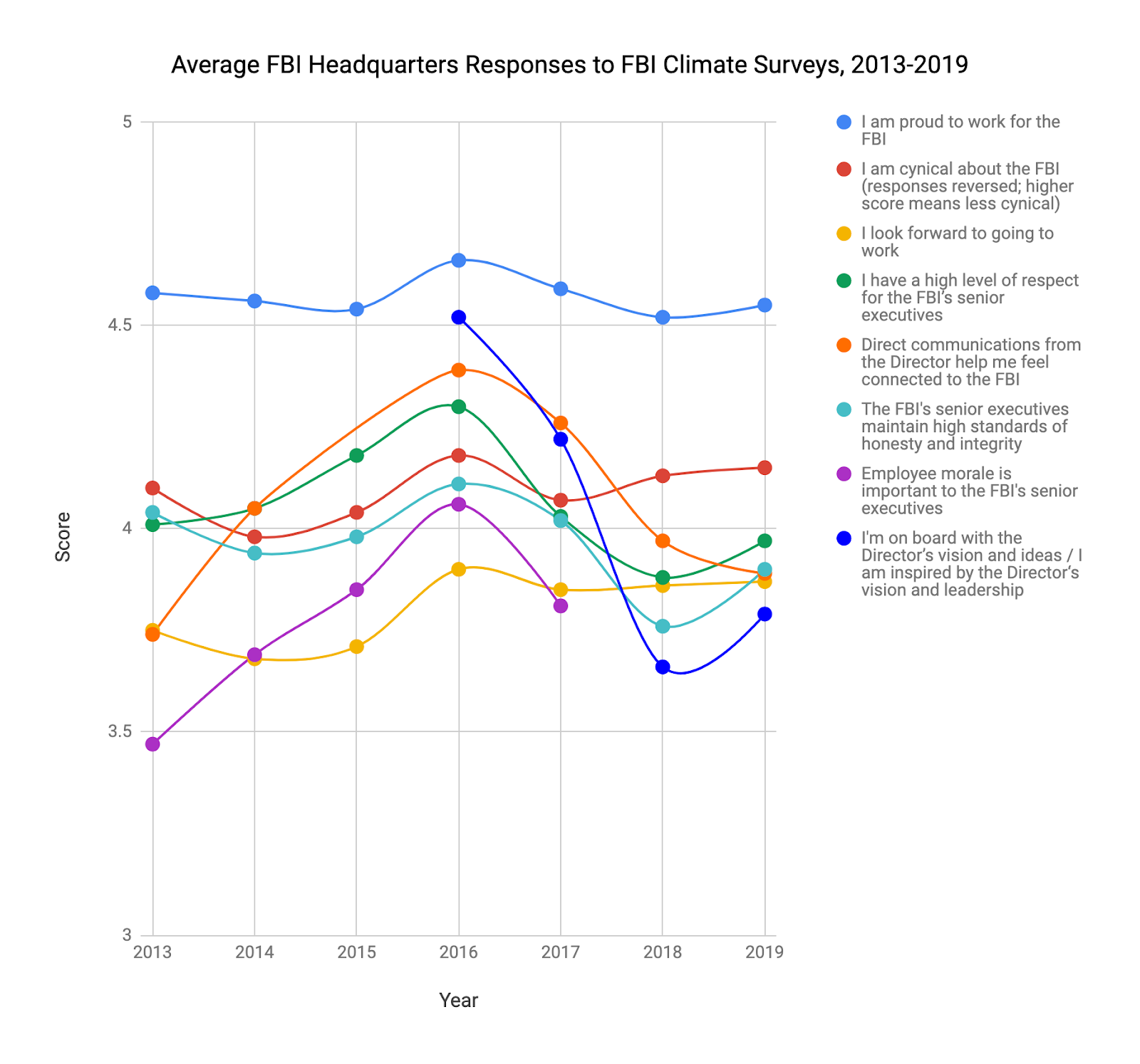 In the field offices, it’s more or less the same picture. Numbers have not recovered to their levels from before the Comey firing, but they are up substantially. Once again, the exception is the question relating to direct communications from the director. 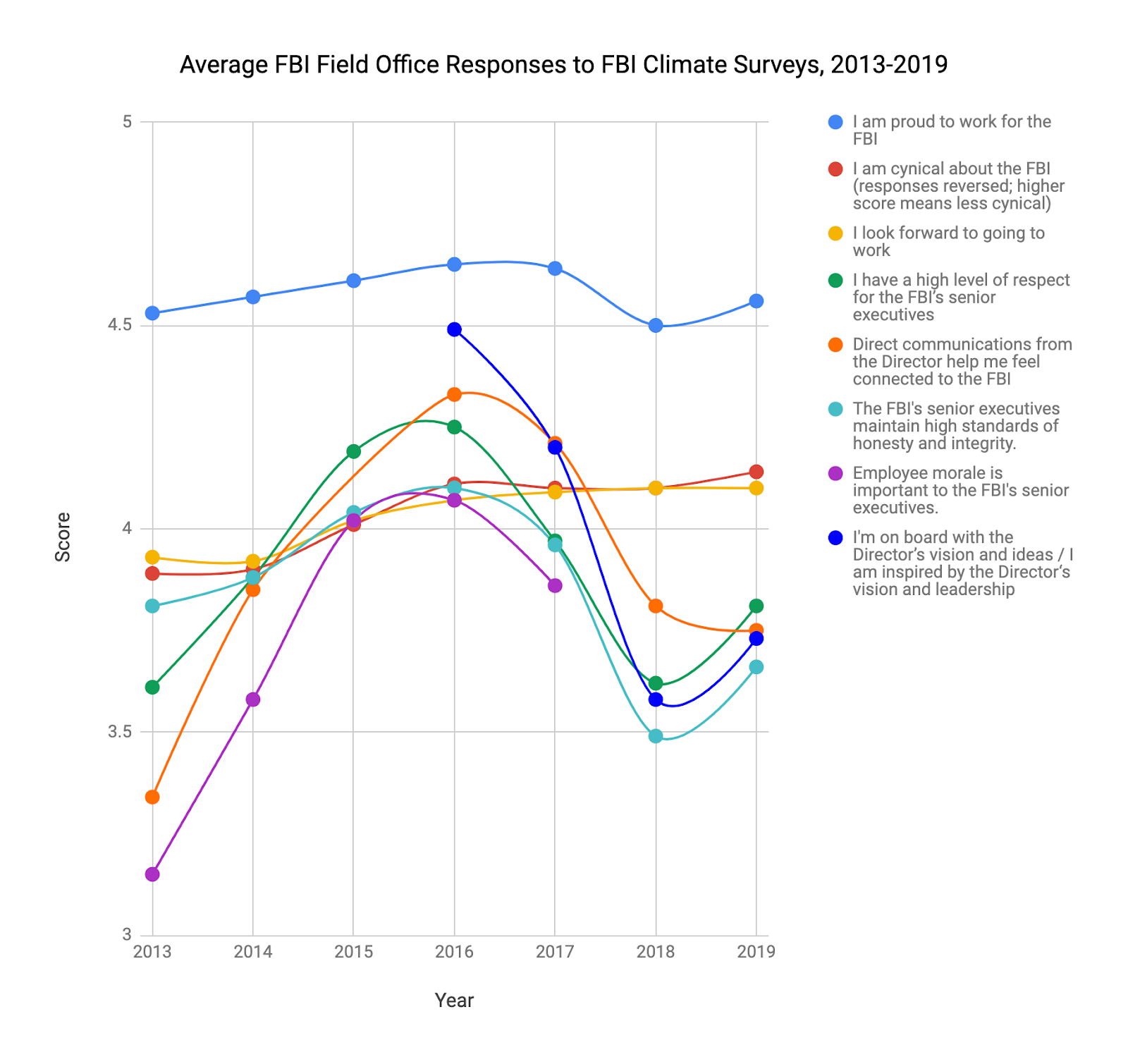 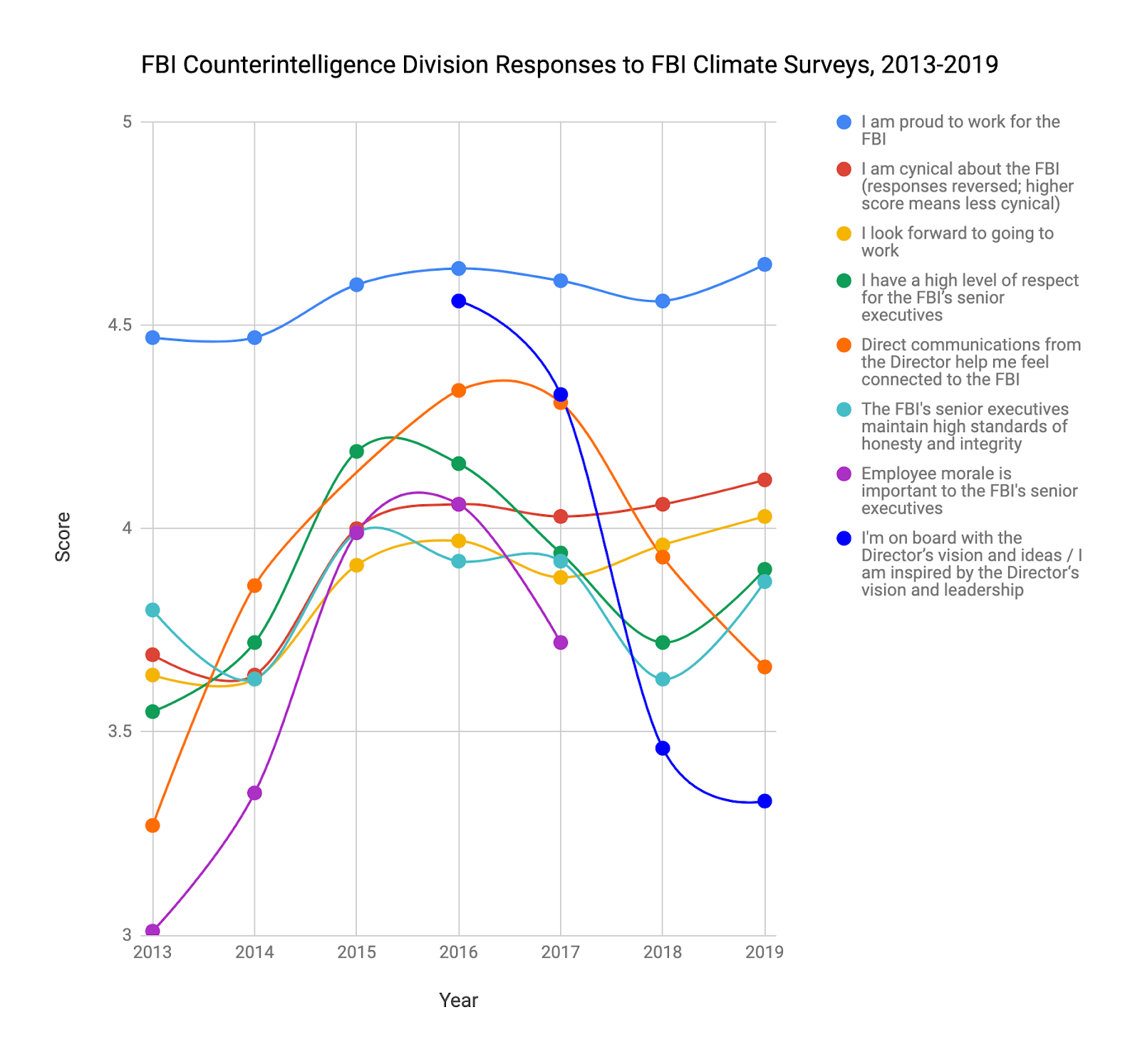 All told, this year’s climate survey results appear to mostly be good news for Wray. At a minimum, it shows that many of the sharp declines in morale over the period of the early Trump era have been arrested and that a recovery may even have begun, though there is still work to be done on several metrics if the FBI’s leadership wishes to recover to pre-Trump administration levels. The counterintelligence division that has been at the center of recent storms is a notable exception to this trend, however, particularly in regard to metrics that seem to reflect its personal relationship with Wray.

To some extent, these data may tend to support what two of us (Anderson and Wittes) previously described as Wray’s “plough-horse-not-show-horse” style, which seeks to maintain a low profile and avoid public controversy. We previously expressed concern that this strategy had led Wray to be too reticent in his public defense of the bureau in the face of the sustained assault by the president and his supporters, which we speculated had contributed to the dramatic decline in agency morale evident in last year’s climate survey. For most of the FBI, however, this concern seems to be abating: despite ongoing attacks on the FBI, morale has begun to recover under Wray’s leadership. Yet the fact that the counterintelligence division continues to feel increasingly alienated from the director—even as its feelings towards the broader FBI have improved—may be a sign that those who have been most directly targeted by the president’s supporters still expect their leader to more forcefully come to their defense.