Editor’s Note: The lifting of billions of humans out of poverty is one of the great achievements of our age and should be celebrated. However, this shift at times increases the chances of civil strife and other serious problems. My Brookings and Georgetown colleague (a two-fer!) Raj Desai assesses the rise of a global middle class and the many risks of instability it brings.

By 2020, members of the global middle class will outnumber either the rich or the poor around the world. This middle-class prosperity promises to unleash opportunity, innovation and broader economic growth in the developing world. But without a functioning system of social protection on which middle-class individuals can rely, the growth in their numbers also carries significant risks of democratic retreat, conflict and instability.

According to research from the Brookings Institution, more than half of the planet can now be considered “middle class” or “rich.” It is estimated that some 48 percent of the world’s population earns between $11 and $110 per day in PPP-adjusted dollars—a standard definition of the middle class using absolute (rather than relative) cut-offs—while another 2 percent earns more than $110 per day. According to projections and measures, the middle class will reach 4 billion people worldwide by the end of 2020 and 5.3 billion by 2030. This expansion has been driven by two phenomena: a steep decline in poverty around the world since the 1980s and rising household incomes in Asia. 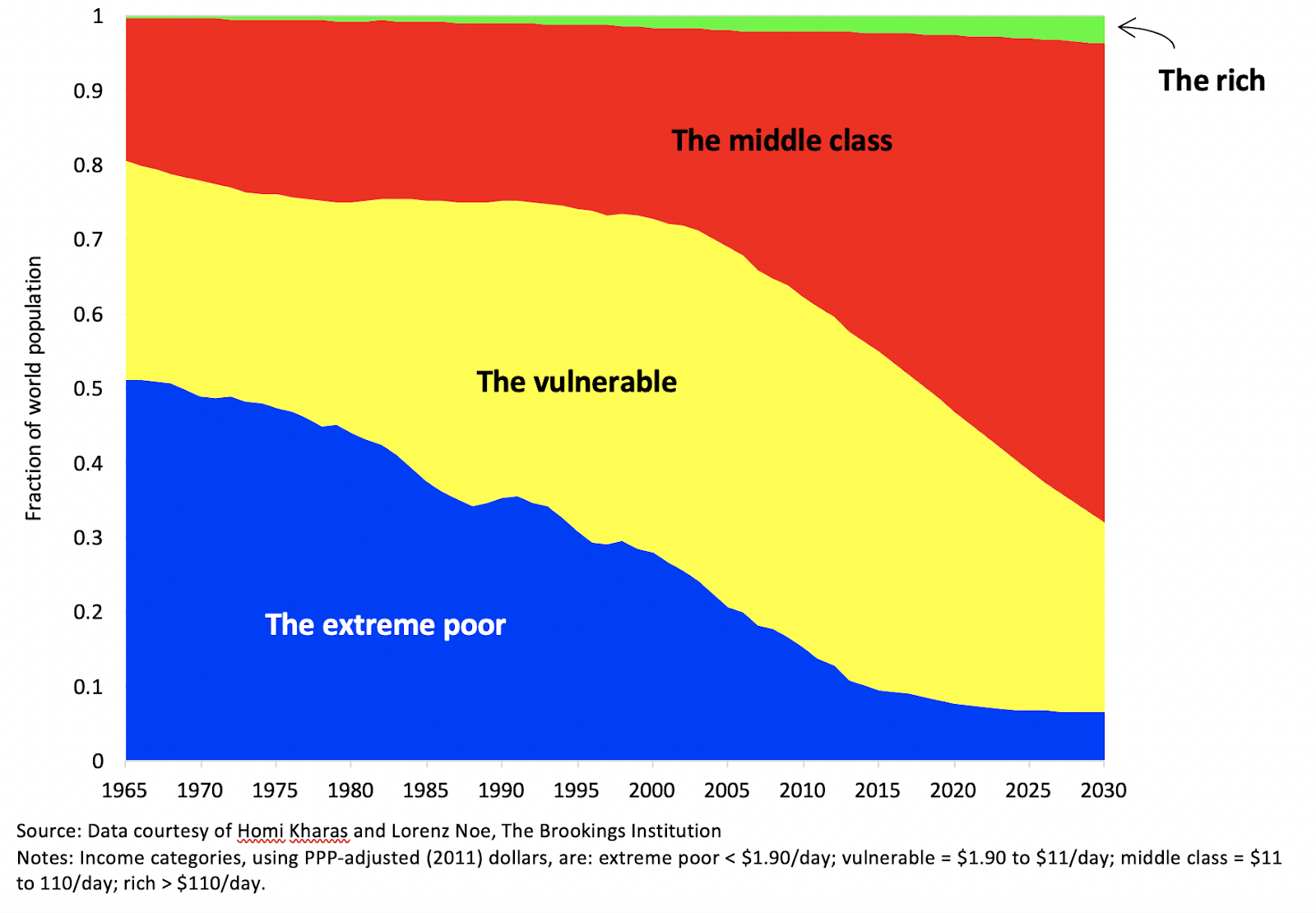 The graph shows the sharp fall in poverty as well as the steady growth of the middle class since 1965, with projections to 2030. Between 1990 and 2015, the share of the population considered by the World Bank among the “extreme poor” (less than $1.90 per day) fell by almost 75 percent, surpassing the first objective of the U.N. Millennium Development Goals to slash extreme poverty by half. At the same time, the bulk of middle-class growth occurred in the Asia-Pacific region, driven by China and India, along with Indonesia, the Philippines and Thailand. By 2030, nearly nine out of 10 new middle-class consumers will be living in East, South and Southeast Asia.

There should be reasons to cheer this global “tipping” point. For the first time in recorded history, the majority of the world’s population will not consist of impoverished peasants or workers but of wage-earners who can afford to buy cellphones, washing machines and televisions, to go out to restaurants and theaters, and to take vacations with their families.

A growing middle class is supposed to be good for society. Their consumerism is supposed to boost global production of durable goods and make businesses more efficient and innovative in targeting these new customers. The global middle class is also committed to the education of their children. The middle class is more entrepreneurial than either the rich or the poor, and it demands more transparency from policymakers and tolerates less corruption. Because the middle class does not owe its wealth to privileges granted by the state, its members are more likely to support protections for property rights, as well as greater access and representation in decision-making. The middle class is more politically engaged than either the rich or poor. A middle class is, therefore, a requirement for stable democracy; one of the most famous phrases in social science history is “no bourgeoisie, no democracy,” written in 1966 by the political sociologist Barrington Moore Jr., arguing that the only democratic route to modernity was through the middle class.

For all these benefits, the world has also observed a recent dark side to the growing global middle class. While middle-class individuals may be more entrepreneurial and civic-minded, they also appear to be more prone to support radicalism, authoritarianism and political violence. Although the middle class played a major role in democratic transitions in Latin America and East Asia in the 1980s, they have also supported military interventions against democratically elected leaders in Thailand (2006, 2014), Honduras (2009) and Egypt (2013). In Pakistan, Indonesia, Colombia and several Arab states, the middle classes appear to support political violence to a greater extent than the rich or poor.

How do we reconcile these two views of the global middle class? One possibility is that rising affluence is producing rising expectations. Individuals with more purchasing power, education and information can place tremendous pressure on governments that may lack the capacity to meet those expectations. And when rising expectations go unfulfilled, the result can be backlash, declining trust in institutions and conflicts with other groups.

Another explanation has to do with a slow, widening disconnect between middle-class citizens and their governments.

Take a look at the graph again. Notice that while the fraction of extreme poor has been falling toward 10 percent, the “vulnerable poor” (those earning more than $1.90 per day but less than $11 per day) has been relatively constant over that same period. In fact, since the 1990s, it has grown! This shows that the dramatic rise in the middle class is because of “churning” among this vulnerable group. Most of the extreme poor have seen their incomes rise, and over time they have become vulnerable—that is, no longer poor, but still not able to join the ranks of the middle class. Meanwhile, some of those who were considered vulnerable have joined the middle class—but not nearly as many as those members of the extreme poor who have become vulnerably poor.

Meanwhile, some who have risen from vulnerable to the middle class may have fallen back into vulnerability.

In other words, being a new member of the global middle class is a precarious thing. An illness, a recession, an ecological or natural disaster can all plunge new middle-class members back into poverty.

In the West, the growth in the middle class occurred alongside an expansion in a universal social safety net. Social “protection”—the collection of policies designed to reduce poverty and vulnerability by limiting people's exposure to risk—was used to tamp down radicalization and social upheaval among the industrial workforce and its accompanying political movements: socialist parties and revolutionary communes. In the 1880s, with the support of “bourgeois parties” against social democrats, Bismarck’s government crafted the elements of the modern welfare state: health care, disability and pensions. Similarly, France established free medical assistance and assistance programs for workers in the 1890s. Facing trade union mobilization and electoral threats from the newly formed Labour Party, the governing Liberals in Britain established worker pensions, unemployment and health insurance between 1906 and 1911.

By contrast, in most developing nations social protection tends to be fragmented, temporary or highly targeted toward specific groups of individuals (mostly the extreme poor) and financed from general budget revenues rather than contributions. As a consequence, the growing middle class has little stake in a system of social assistance from which they have been typically excluded. Brazil’s Bolsa Familia program, which provided small cash transfers to poor families, is widely credited with lifting millions out of poverty in that country. But for the tax-paying middle classes, Bolsa Familia provided no cushion against economic shocks (in fact, the current far-right presidential candidate Jair Bolsonaro once declared Bolsa Familia to be a “crime” against the Brazilian people for how it redistributes money to the underprivileged). Meanwhile rich Brazilians have access to pensions and other programs for salaried professionals.

According to the International Labour Organization, 80 percent of the developing world’s population has no access to social protection. Little wonder then that, across the developing world, the new middle classes send their children to private schools, use private health care, dig their own boreholes for water and buy their own generators. This middle-class “exit” means there are few demands by the middle classes to improve the public provision of services or the functioning of their government.

A new social contract that connects the emerging middle class to their own governments, as well as to the global economy, will be needed to avoid exacerbating tensions between social classes and to remove barriers to social mobility, while preserving the benefits afforded by globalization and technological change.

Part of this new social contract requires resisting the default preference for targeted benefits. In the 1980s and 1990s, many developing countries shifted away from broad social policies that emphasized universal benefits toward an approach that concentrated public resources on the poorest segments of the population but that gradually alienated the non-poor in these countries. Abetting this transformation in social policy has been a host of multilateral and bilateral donors that emphasized short-term cost-effectiveness over political support from broader segments of citizens in those countries.

The United States and Western Europe have seen some of the consequences of a middle-class revolt against political systems that were perceived to be under-delivering. Whether rising incomes in the developing world create global opportunities for shared economic growth, or unleash new forces of division and disorder, will depend critically on policies that can gain acceptance and buy-in from the middle class.

Raj M. Desai is Associate Professor of International Development at Walsh School of Foreign Service and the Department of Government at Georgetown University, and a Nonresident Senior Fellow at the Brookings Institution. His research focuses on the problems of social policy and economic reform, state fragility, foreign aid, and international development. He was previously a private sector development specialist at the World Bank. He received his Ph.D. and M.A. degrees from Harvard University, where he was a National Science Foundation Fellow, and his B.A. from the University of California, Irvine.
More Articles
Published by the Lawfare Institute in Cooperation With