Editor’s Note: Perhaps the biggest counterterrorism challenge facing the Trump administration is whether or not to keep a robust military presence in Syria now that the Islamic State has been forced underground. Kim Cragin of the National Defense University argues that the killing of jihadist leaders and other operations in Syria are an important part of why the United States and Europe have experienced fewer attacks than expected and that leaving the region risks more successful terrorist attacks.

“The enemy gets a vote.” If you spend enough time with U.S. soldiers, sailors, and airmen, you will hear them say this. It is a reminder that even the best developed and executed plans can go haywire because the other side will use its own skill, resources, and determination to foil you. Agility—strategic, operational, tactical—is necessary. This mindset has proven to be especially important over the past 17 years for efforts against al-Qaeda and the Islamic State. As we consider the level of U.S. forces required to secure an “enduring defeat” of the Islamic State, now that its caliphate has crumbled, we should keep in mind that the enemy gets a vote.

Most people remember the “Mission Accomplished” speech by President George W. Bush on May 1, 2003, eight years before U.S. forces withdrew from Iraq. A similar attitude prevailed after al-Qaeda leader, Osama bin Laden, was killed by U.S. forces in May 2011. President Barack Obama declared the world to be a “better place” after bin Laden’s death. Yet Abu Bakr al-Baghdadi had already assumed control over al-Qaeda in Iraq at that time. Soon thereafter, al-Baghdadi would split from al-Qaeda and form the Islamic State, making the world a more dangerous place.

We now face another inflection point. Al-Baghdadi remains at-large, but the Islamic State has lost most of its territory, including its headquarters in Mosul and Raqqah. Islamic State fighters also have not executed a significant external operation—defined as attacks outside Syria, Iraq, or one of the 25 Islamic State provinces—in the West since August 2017, when sympathizers drove a van down a pedestrian walkway in Barcelona, killing 14 people and wounding approximately 100. These factors suggest that the U.S. military can reduce its counterterrorism activities in Syria and Iraq. The question is: by how much?

The answer depends on the extent to which the U.S. public and the White House are willing to accept external operations by the Islamic State within the U.S. homeland and the West. External operations can include attacks directed or enabled by Islamic State fighters based in Syria and Iraq. They also include plots by sympathizers with no ties to the Islamic State, but who are inspired by its rhetoric, such as the May 2018 plot targeting a shopping mall in Plano, Texas. The U.S. military plays a role in thwarting directed, enabled, and inspired attacks. But the level of U.S. military resources devoted to this mission depends, in large part, on the level of risk acceptable to the U.S. public and White House.

The U.S. National Security Strategy (NSS) does not address the issue of risk directly. Instead, it states that the United States will “stay on the offensive against those violent non-state groups that target the United States and our allies.” The NSS goes on to explain that an offensive approach to counterterrorism is necessary because defensive measures are not sufficient. Thus, if we assume that very little tolerance exists for attacks against the U.S. homeland and the West, then the data presented in Figure A indicate that we still have a ways to go. Figure A displays the number of successful and disrupted external operations—directed, enabled, and inspired—by the Islamic State since June 2014.* Notably, the general trend remains upward: Though the Islamic State has not succeeded in carrying out any major attacks against the United States and West in the past year, it continues to try to instigate such attacks, even amidst setbacks in Syria and Iraq. The United States and its allies simply have gotten better at stopping them. In fact, the United States and its allies consistently have halted more external operations than the Islamic State has been able to execute since March 2016. 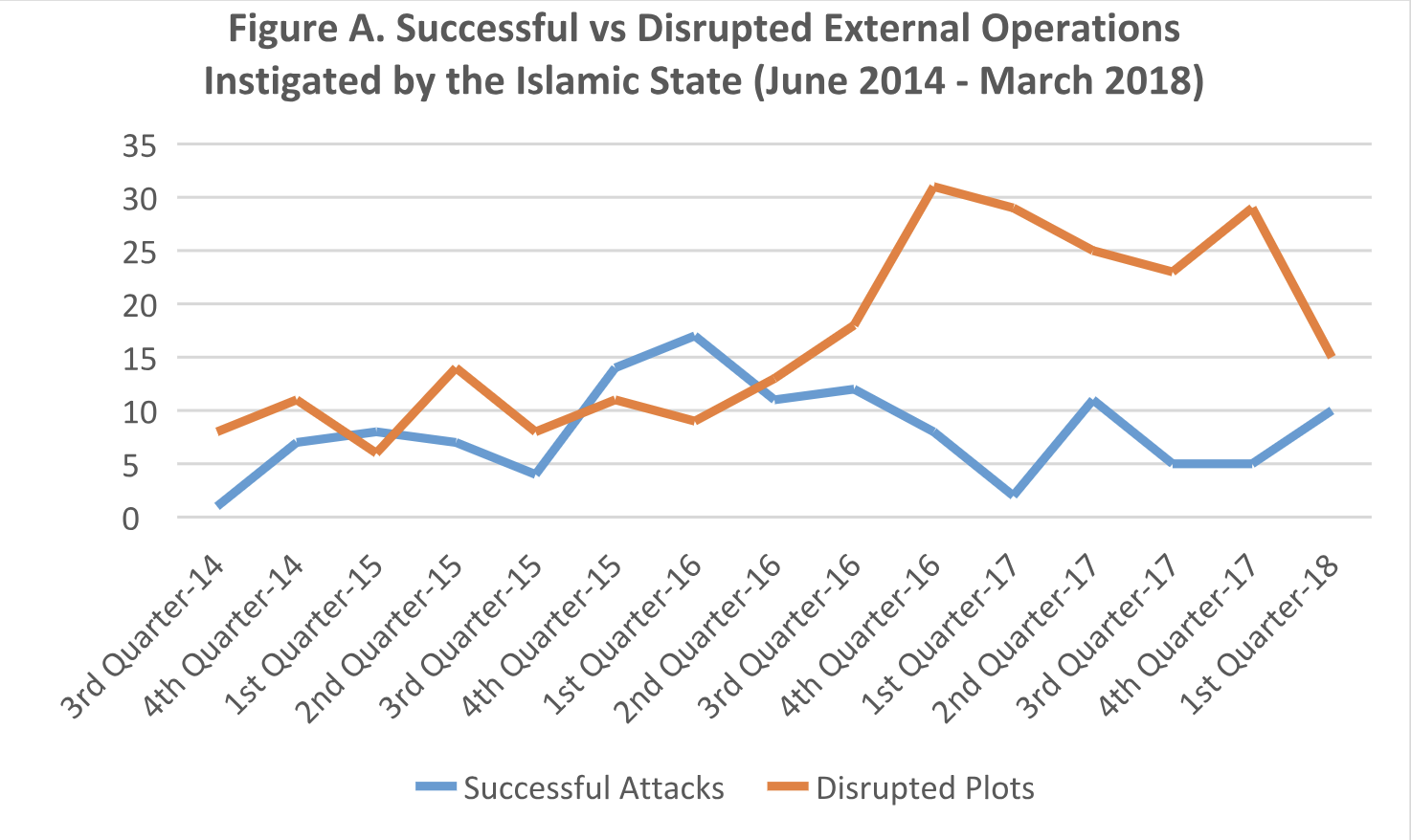 The data presented in Figure A are good news. They substantiate the conclusion that the United States and its allies have been able to develop and execute a counterterrorism strategy to mitigate the threat to the U.S. homeland and the West from the Islamic State. This success was hard earned. It relied, at least in part, on military strikes against the Islamic State by U.S. and allied forces in Syria and Iraq. These strikes continue.

Of course, police, other law enforcement, and intelligence agencies also have identified, detained, and arrested Islamic State operatives in the midst of conducting attacks. The responsibility does not fall entirely on the military, nor should it. However, if Islamic State operatives continue to pursue attacks against the U.S. homeland and the West, as illustrated in Figure A, and military strikes disrupt these plots, the question remains: how much do we rely on airstrikes and raids to prevent external operations? The answer should inform the level of effort devoted by U.S. forces to counterterrorism in Syria and, arguably, elsewhere.

Figure B illustrates these findings. It compares the ratio of successful external operations (21 percent) versus those disrupted by the arrest of perpetrators as they “move towards the target” (38 percent) versus those halted by airstrikes or raids against Islamic State external operations planners (41 percent). To be fair, these numbers likely underestimate the impact of airstrikes and raids by U.S. and allied forces. The numbers are based solely on publicly-announced strikes. They do not account for intelligence collected on the battlefield, which, in turn, can assist law-enforcement activities. The numbers also equate the death of an experienced external operations planner, such as Salim Benghalem or Abu Muhammad a-Adnani, with the arrest of an individual who becomes sympathetic to the Islamic State, purchases a knife, and with some limited guidance from an Islamic State virtual planner, plans to stab several people. But, even with this conservative count, Figure B reveals that the United States and its allies rely heavily on military strikes in Syria and Iraq to halt Islamic State external operations. Given this reliance, any reduction of U.S. forces should not be too precipitous. 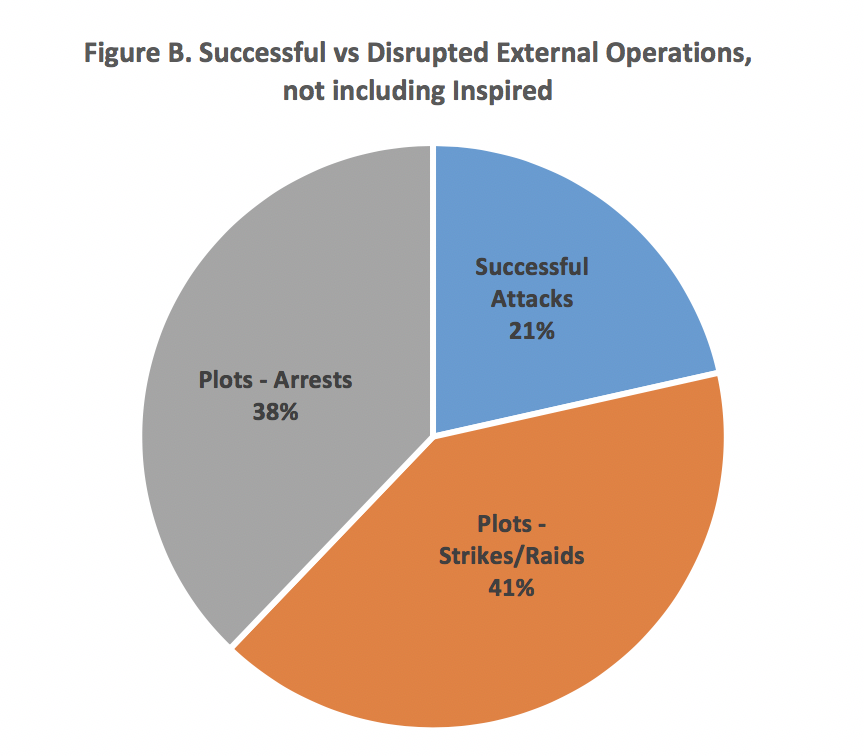 Unfortunately, U.S. and allied forces are in a precarious position in Syria today. They continue to experience the dangers of conducting periodic raids against Islamic State commanders. U.S. and allied forces have been attacked by local militias. They had to defend themselves from Russian mercenaries fighting with pro-Assad forces earlier this year. As recently as last week, U.S. forces conducted an exercise near al-Tanf garrison in Syria, reportedly to discourage Russia from executing strikes in a 55-kilometer de-confliction zone around the U.S. base.

Turkish military forces also have entered the fray. In January 2018, Turkish forces initiated “Operation Olive Branch.” The purpose was to clear Afrin of Yekîneyên Parastina Gel (YPG) forces. Turkey views the Syrian YPG as posing an existential threat due to its ties to the Kurdistan Workers’ Party (PKK). But Operation Olive Branch stymied the U.S.-led campaign against the Islamic State. The U.S. partner on the ground against the Islamic State is the Syrian Defense Forces (SDF). While the SDF contains both Syrian Kurds and Arab fighters, it is primarily led by the Kurds. Some of the Kurdish fighters stopped attacking the Islamic State and, instead, travelled to Afrin to defend the city.

Now the U.S. military has partnered with Turkish forces to conduct security patrols in Manbij, where Assad regime, Turkish, and U.S.-supported forces converge. These coordinated patrols are part of a roadmap negotiated between the United States and Turkey to help alleviate tensions between the two NATO allies. Fundamentally, the U.S. government needs Turkey’s assistance to stabilize areas in Syria cleared of Islamic State fighters. But, until this stabilization occurs, or if it fails, the U.S. military and its allies may need the SDF to help identify and pursue individuals responsible for external operations. This means that the Manbij roadmap and its implementation over time hold strategic implications for U.S. national security.

It is easy to throw your hands up over the current situation in Manbij and northern Syria. But it is important to remember that the US-led counterterrorism campaign has worked. For over two years, the United States and its allies have thwarted more external operations than the Islamic State has been able to execute. We should take this opportunity to recalibrate the level of commitment of the U.S. military in countering terrorism. We should ask ourselves: How much more of this burden can we ask law enforcement to take on, and how much more can our allied forces take on? At the same time, we should remember that “the enemy gets a vote” and be wary of reducing the U.S. military’s involvement too much or too quickly. Success may be temporary, and the threat of external operations by the Islamic State persists.

* The data in Figures A and B were derived from a database developed and maintained by the author at the National Defense University. Kira McFadden, Dominique Reichenbach, and Grace Strelich also contributed to the database. It includes all successful external operations conducted by Islamic State operatives and sympathizers. It also includes all publicly-reported disrupted plots, defined as the arrest of perpetrators who have identified the target, purchased the weapons, and made plans (e.g. logistics) to conduct the attack. It does not include arrests for (e.g.) money sent abroad to the Islamic State or attempted travel to Syria. The database also includes plots disrupted by the U.S. military and its allies through airstrikes on Islamic State external operations planners in Syria and Iraq. Operation Inherent Resolve regularly provides updates on its strikes and often names the Islamic State operative targeted. If basic research through media reports and/or Islamic State propaganda confirms that these individuals helped plan a previous attack, then this strike is counted as “disrupting” a future plot.

Kim Cragin, Ph.D. is a distinguished research fellow at the National Defense University. She is a widely published expert on counterterrorism, foreign fighters, and terrorist group adaptation. Cragin recently left a position as senior political scientist at the RAND Corporation and also has taught as an adjunct professor at Georgetown University and the University of Maryland. The opinions expressed here represent her own views and are not those of the National Defense University, the Department of Defense, or the U.S. government.
More Articles
Published by the Lawfare Institute in Cooperation With