The contemporary debate about the effects of new technology on individual privacy centers on the idea that privacy is an eroding value. The erosion is ongoing and takes place because of the government and big corporations that collect data on us all: In the consumer space, technology and the companies that create it erode privacy, as consumers trade away their solitude either unknowingly or in exchange for convenience and efficiency.

Today, we released a Brookings paper that challenges this idea. Entitled, “The Privacy Paradox II: Measuring the Privacy Benefits of Privacy Threats,” we try to measure the extent to which this focus ignores the significant privacy benefits of the technologies that concern privacy advocates. And we conclude that quantifiable effects in consumer behavior strongly support the reality of these benefits.

In 2015, one of us, writing with Jodie Liu, laid out the basic idea last year in a paper published by Brookings called “The Privacy Paradox: the Privacy Benefits of Privacy Threats.” (The title, incidentally, became the name of Lawfare’s privacy-oriented subsidiary page.) Individuals, we argued, might be more concerned with keeping private information from specific people—friends, neighbors, parents, or even store clerks—than from large, remote corporations, and they might actively prefer to give information remote corporations by way of shielding it from those immediately around them. By failing to associate this concern with the concept of privacy, academic and public debates tends to ignore countervailing privacy benefits associated with privacy threats, and thereby keeps score in a way biased toward the threats side of the ledger.

To cite a few examples, an individual may choose to use a Kindle e-reader to read Fifty Shades of Grey precisely because she values the privacy benefit of hiding her book choice from the eyes of people on the bus or the store clerk at the book store, rather than for reasons of mere convenience. This privacy benefit, for many consumers, can outweigh the privacy concern presented by Amazon’s data mining. At the very least, the privacy benefits of the Kindle should enter into the discussion.

In this paper, we tried to begin the task for measuring the effect and reasoning that supported the thesis in the “Privacy Paradox” using Google Surveys, an online survey tool.

In order to isolate the effects of perceived privacy benefits from those of convenience, efficiency, or economic concerns, we asked pairs of questions about consumer behavior. In each pair, one question concerned an item that would be likely to trigger privacy concerns (for example, condoms), while the other involved a much more mundane item (for example, dental floss). The results indicate a measurable difference in reported behavior about sensitive behaviors as compared to non-sensitive ones.

First, we tested the hypothesis that readers of Fifty Shades of Grey would prefer to do so on an e-reader than would readers of a substantially less titillating novel, Hunger Games. A full three-quarters of respondents who read Hunger Games did so in paper copy (Figure 5), while only 58.7 percent of Fifty Shades readers reported having read a paper copy of the salacious (and easily identifiable) novel (Figure 4).

Second, we asked respondents about their shopping habits to address the proposition that factors other than privacy, such as convenience or price, might explain preferences for online shopping. Very few survey respondents preferred to buy general household items online, but almost double preferred to buy products of a sensitive personal nature online, despite presumably equal convenience or price benefits to online shopping for either type of product (Figure 6).

Finally, we tested the hypotheses that young men and women would rather use self-checkout to buy products like condoms and tampons for reasons beyond convenience and efficiency. Though many reported having no preference, more respondents in both groups reported a preference for a human cashier when buying dental floss than when buying products they might consider embarrassing (Figures 8 & 9). 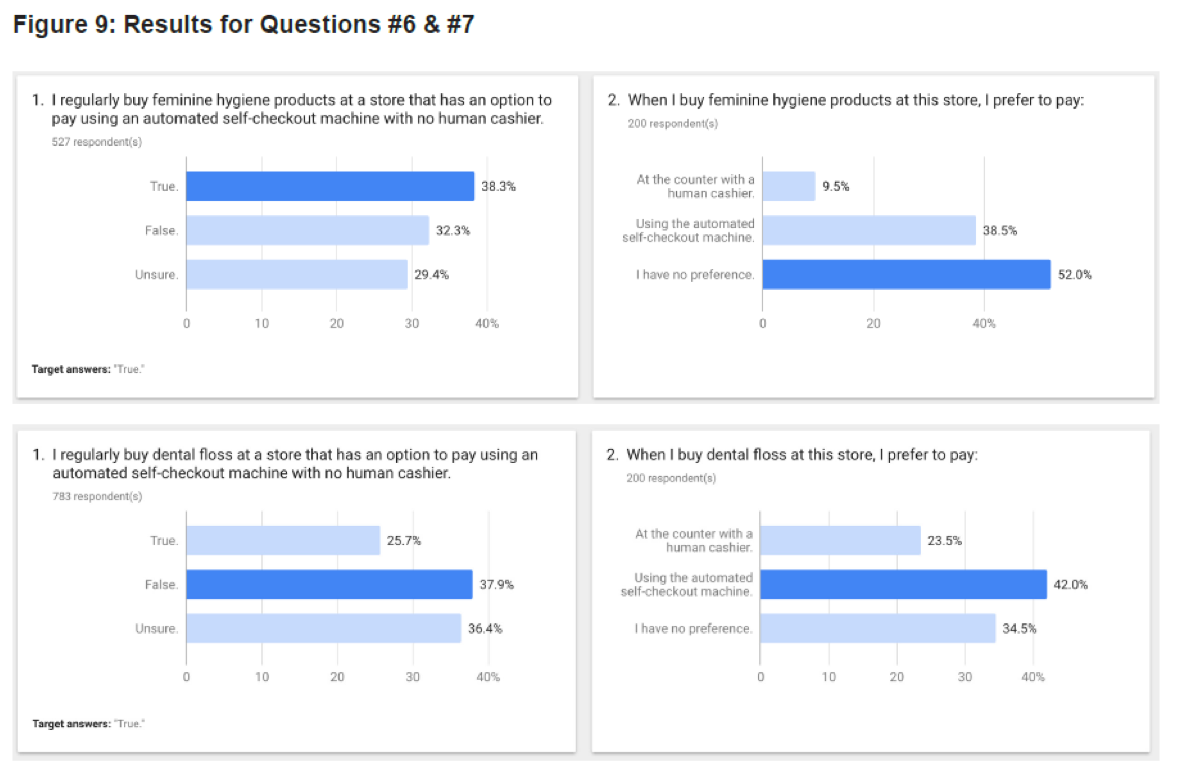 There’s a lot more in the underlying paper, including some amusing material our Google’s half-heartedly prudish censorship of Google Surveys—and our efforts to hack the rules. But you’ll have to download the paper for that. For present purposes, the key point is that the results clearly indicate that when privacy concerns are activated, consumers tend to favor methods of purchasing (or reading) that shield their behavior from those around them, while they are not shy about exposing the same information to tracking and storage by remote entities like Google or Amazon. In short, privacy from whom matters, and an understanding of privacy as a contextual value is really important to explaining the lived privacy choices of real people.

Emma Kohse is a J.D. Candidate at Harvard Law School, where she serves as editor-in-chief of the Harvard International Law Journal, and a 2012 graduate of Georgetown University's School for Foreign Service.
More Articles
Published by the Lawfare Institute in Cooperation With