The Ohio presidential primary entered the national spotlight in “one of the most confusing moments, if not the most confusing moment, in election history.” In a whirlwind of proclamations and court cases, the state’s March 17 primary was postponed at the eleventh hour due to fears surrounding the coronavirus and was eventually rescheduled for April 28.

This rescheduled primary was different from any election Ohio had experienced before. The state saw a 444 percent increase in mail ballots, from 287,843 ballots mailed in the 2016 primary to 1,565,808 in 2020. Yet despite this sharp increase, Ohio by and large avoided any of the election snafus that other states have faced this year as officials have scrambled to keep up with the onslaught of absentee ballots. In other words, Ohio seems to have handled coronavirus-related challenges well in its 2020 primary election. What can the quantitative trends in Ohio’s primary tell us about how the state will fare in the general election?

First, we should ask who actually voted in the Ohio primary. As it turns out, not a lot of people.

Turnout in the 2020 Ohio primary totaled 1.8 million voters, a figure 45 percent lower than the 3.3 million voters who cast ballots in the state’s 2016 primary. This year’s drop in turnout was influenced by two factors: the lack of a real contest for the Republican presidential nomination and the state’s response to the ongoing pandemic. Together, these factors contributed to Ohio experiencing a decline in voter participation that outpaced that of any other state during the presidential primary season. 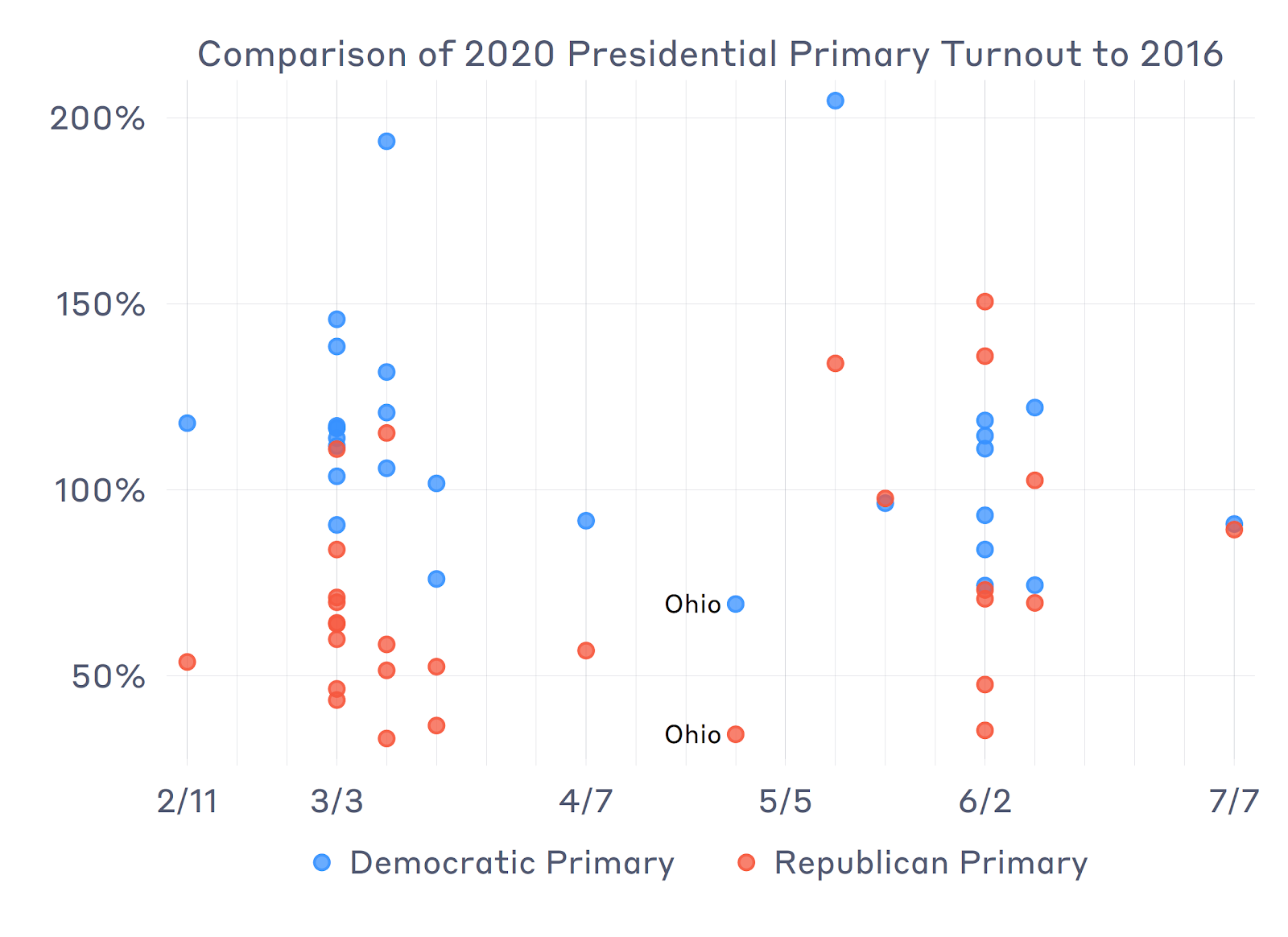 The electorate that showed up in 2020 also looked markedly different from the crowd of voters in 2016. Most notably, this April’s electorate was older than it was in previous years, as shown in Figure 2. 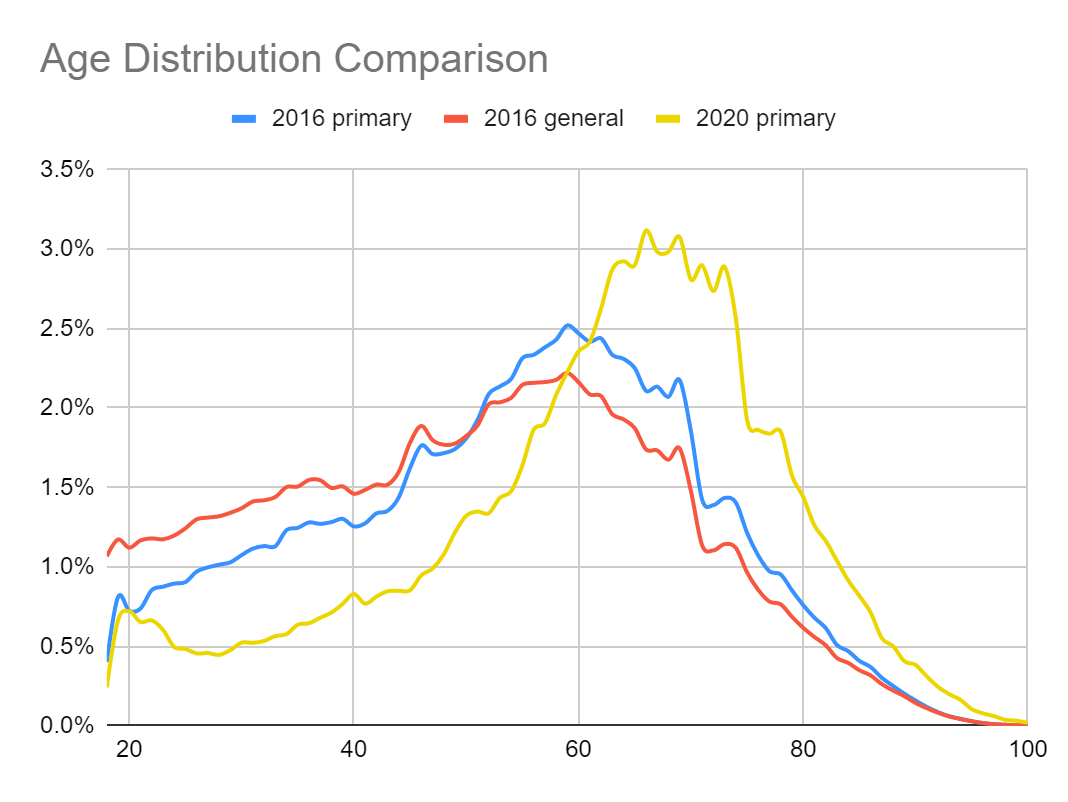 Figure 2: Age distribution of voters in the 2020 primary compared to the 2016 primary and general election.

It’s unclear what explains this sudden “superaging” of the 2020 primary electorate in Ohio. It could be that older voters simply have more experience with the electoral process and thus were better at jumping through the hoops to vote by mail. Or, it could be that older voters had more motivation to vote for Biden and Trump than middle-aged voters did. Whatever the reason, the age distribution in Ohio’s 2020 primary was unusual and creates a source for more uncertainty come November.

Whose Ballots Were Not Counted?

A variety of reasons account for why some mail-in ballots are not counted in a state election. Ballots may be rejected by the county election board for failing to meet a technical requirement, or they may arrive too late. As the spread of the coronavirus in the U.S. has made expanded mail-in voting necessary throughout much of the country, many state election officials have expressed concern about such submission errors swaying electoral results.

Remarkably, the rate of uncounted mail-in ballots in Ohio actually fell from 1.5 percent in 2016 to 1.4 percent in 2020 despite the 444 percent increase in absentee ballots cast in the state. This comparative success is complicated by Ohio House Bill 197 (HB 197), which was state coronavirus-relief legislation passed prior to the primary election. In Ohio, HB 197 resulted in the disqualification of many ballots submitted in person and arguably contributed to voter confusion over the mail-in voting process.

HB 197 established specific conditions under which voters could cast in-person ballots in the primary. Many voters in the 2020 Ohio primary preferred to vote by mail due to safety concerns in light of the pandemic. But the vote-by-mail process can often be confusing for voters. And compared to in-person voting, the vote-by-mail system requires more planning and coordination on the part of voters to make sure their ballots are counted. Because of this, some voters in the 2020 Ohio primary chose to cast their ballots in person.

But, as stated previously, HB 197 made it hard to qualify for in-person voting in the state’s April 28 election. One of the conditions for in-person voting prescribed by HB 197 required that the voter be registered on or before Feb. 18 (the original voter registration deadline) in order to vote at the polls. Under the same law, a ballot cast in person could be disqualified because the voter who submitted it did not meet at least one of the following qualifications: having a disability, lacking a permanent address, or having requested an absentee ballot that was not received. When limiting our analysis to provisional ballots, the leading cause of ballot rejection was HB 197, with nearly 53.8 percent (5,469) of ballots not being counted for this reason.

So, although Ohio’s voters and election officials successfully submitted and processed many mail ballots, in-person voting proved problematic and was inaccessible to some voters. In November, it’s reasonable to expect that as turnout rises the electorate overall will be less politically savvy. In that case, impediments to voting in person could have much larger consequences in the general election.

Looking to November, data from Ohio’s 2020 primary indicates a number of possibilities for how the state’s general election will play out.

With a competitive two-party race for the presidency, turnout will almost definitely be higher. Republican turnout especially will likely surge past its primary levels amid this increased competition. This expected swell in voter turnout may put a strain on Ohio’s capable electoral system.

Ohio’s lack of “meltdowns” this past primary could be explained in part by the large presence of experienced voters who limited the set of problems that might have emerged had there been more confusion over the electoral process. This may not be the case in Ohio’s general election, given the expected increase in voters with all levels of experience. In other states we have studied, the data suggests that first-time voters have had a more difficult time successfully navigating the new voting environment and that voters in general elections are often less experienced than the more politically attuned primary voters.

The usage of mail ballots will most likely decline as a fraction of the electorate in Ohio’s general election, compared to what was seen in the state’s primary. This is for two primary reasons. First, state officials are not facilitating mail balloting in the general election to the degree that they did in the primary. Second, inexperienced voters are more likely to vote in person than by mail—and since HB 197 applied only to the primary, there are currently no restrictions on Ohio’s in-person voting in the general election.

Nonetheless, even if the percentage of mail ballots used in Ohio’s general election declines, the raw number of mail ballots will likely increase. This could place new strains on the state’s ballot-handling capacities. At the same time, Ohio demonstrated an ability to handle a historic volume of mail ballots in its 2020 primary. Although a new record will likely be set again in November, the growth in mail ballots almost certainly won’t reach 444 percent of its prior level, as happened in the primary.

Ohio’s current deadline for requesting absentee ballots is three days before Election Day, which puts some late-requesting voters at risk of returning their mail ballots too late to be counted. Further, the U.S. Postal Service’s delays have only been worsening through the summer, which could present another problem for late-requesting voters.

Nonetheless, the state proved that it had the capacity to handle what was truly an unprecedented spike in absentee ballots in April. We can only hope the same holds true for November.

Pia Deshpande is a writer for the MIT Election Lab and a 2020 graduate of Columbia University.
More Articles
Published by the Lawfare Institute in Cooperation With