On Day One of his presidency, Donald Trump has promised to rev up the deportation machinery. Up first, he says, are the “probably two million, it could be even three million,” criminal immigrants in the country. Trump may not know the exact number of criminal immigrants that his raids would net, and to be frank, neither do I. But I can promise you this: It won’t be anything like two million, let alone three million.

The two million number materialized well before Trump repeated it in his recent 60 Minutes interview. He used the figure in a number of his rallies, including his infamous, Phoenix speech, in which he outlined his immigration plan, and it appears in his plan for the first 100 days in office. The Trump team even shared its official source for the two million criminal immigrant figure with the Washington Post: a 2013 Department of Homeland Security (DHS) budget report to Congress.

So, go ahead, open the report, and scroll to page 1092. You too will find the following line: “ICE [Immigration and Customs Enforcement] estimates that 1.9 million removable criminal aliens are in the United States today.” Since its publication, the Migration Policy Institute, FiveThirtyEight, the New York Times, the Washington Post, and others have all used this number, citing the report.

But as they say, the devil is in the details, or in this case, the footnote.

Here’s the breakdown of ICE’s footnoted explanation of its methodology for reaching the figure of 1.9 million:

After following this three-point methodology, ICE came up with 1.9 million removable non-citizens in the United States. Now let me explain what happened when I tried to replicate ICE’s process to reach 1.9 million criminal migrants. Spoiler alert: It’s a little different.

I first pulled up the 2008 ACS data to get a total of 21.6 million foreign born, non-U.S. citizens in the country. To get around the ACS under-counting adjustment issue (#2 on the list above), I found two other 2008 reports that use DHS’s methodology for counting undocumented immigrants and legal permanent residents. When combining these two groups, I got a total of 24.2 million foreign born, non U.S.-citizens.

Now, we have to move to step #3 of the methodology, applying an incarceration rate from the 2003 Justice Department report. Luckily for us, the ASC data has a race and gender breakdown for its non-citizen population and so does the Justice department’s incarceration data. Here’s the breakdown that I got when combining the two numbers: 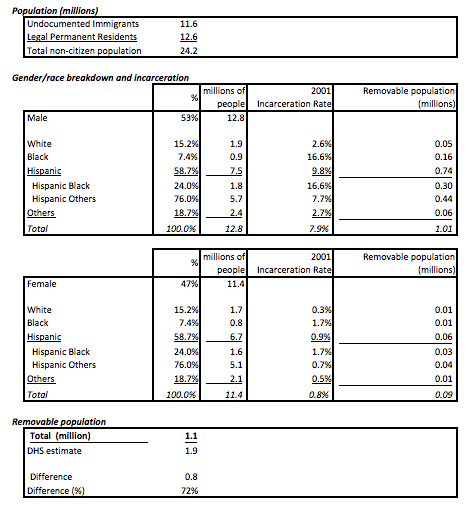 This model assumes that race breakdowns are the same between genders (ACS non-citizen data doesn’t have more specific information). It’s also assuming that 24 percent of Hispanics identify as black, which Pew reports to be the national rate.

As you can see, the final number comes out to just around 1.1 million. That’s a lot less than 1.9 million.

Why such a large discrepancy? I began to tinker around with different rates from the report to see what I could glean. I don’t want to pretend to any insight into the way ICE officials came up with their estimate. But here’s one possibility: if you take the incarceration rate for U.S. Hispanic male adults (7.7 percent) and apply it to the entire 24.2 million non-citizens, you’ll get 1.86 million, which is a reasonable approximation of the number ICE came up with.

But this arithmetic issue is only one part of the problem. The Justice Department report refers to the incarceration rates for “U.S. residents” and does not have a specific rate for immigrants. Scholars have repeatedly noted that native born Americans commit at least two times as many crimes as do immigrants. You can read up on a few of the studies here, here, and here. If this is right, it could mean that after correcting for the math, we would get a number closer to 550,000 lifetime criminal immigrants at most (including both undocumented and legal permanent residents).

This number is more closely aligned with the actual number of criminal deportations in 2008: 120,000. (Some 37,700 were on violent crime charges, while the rest were deported over immigration, traffic, drug crimes, and other non-violent offenses.) To be sure, Trump’s more zealous supporters may suggest that this almost 1.8 million immigrant gap reflects the lax enforcement of the Obama administration (which has deported well over a million criminal immigrants from 2008 through today) and claim that the incoming administration therefore has an even greater imperative to find the many “hidden” criminal aliens and deport them.

To them, I say this: Good luck. It won’t be easy deporting people who don’t actually exist.