Longtime Lawfare readers may be familiar with the work we have published on “sextortion”—a form of remote sexual violence that usually involves a perpetrator obtaining explicit images or video of a victim and using that material for blackmail, often to produce further sexual material or money. Editor-in-chief Benjamin Wittes and I, along with colleagues Cody Poplin and Clara Spera, did a fair bit of research on the matter a few years ago. At the time, we thought of it as something near the edge of the issues with which Lawfare concerns itself—certainly within the publication's ambit as a question of violence enabled by changing technology, but not a matter at the dead center of “hard national security choices.”

On Dec. 17, the Senate intelligence committee released two reports on Russia’s social media influence efforts, one by the Computational Propaganda Research Project and one by the group New Knowledge. The documents are lengthy and worth reading through with care. But one passage immediately stuck out to me: a description in the New Knowledge report on what appear to have been Internet Research Agency efforts to stockpile material for sextortion.

The relevant section of the report reads as follows:

Recruiting an asset by exploiting a personal vulnerability—usually a secret that would inspire shame or cause personal or financial harm if exposed—is a timeless espionage practice. So is the tactic of infiltrating protest movements. The [Internet Research Agency] attempted both, even going so far as to create help hotlines for people struggling with sexual behavior, creating an opportunity to blackmail or manipulate these individuals in the future.

And it includes the below samples of the advertisements placed to funnel people toward those hotlines: 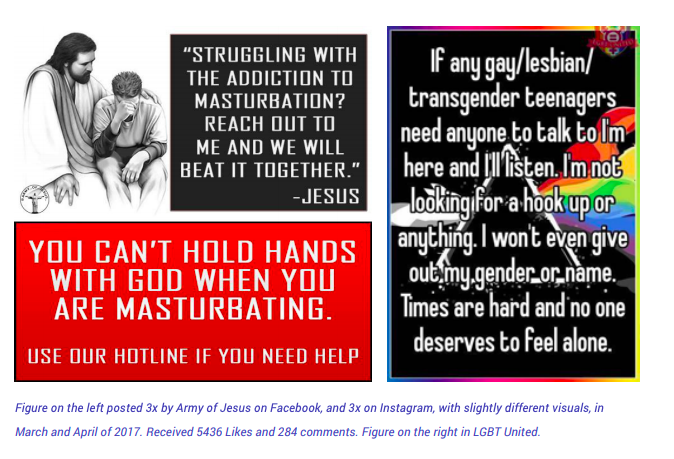 From the report, it’s not clear how much material the troll farm collected or whether it ever took action to actually “blackmail or manipulate” anyone. But the fact that an entity linked with the Russian government took at least an initial step toward stockpiling material with which to sextort Americans is an ominous sign of the direction in which we might be headed. Before this, the only sextortion attempts of which my coauthors and myself have been aware were conducted by private actors—people seeking money or control over others for sport. We’d never seen evidence of a state-sponsored attempt for intelligence purposes.

Somewhat ominously, the report writes of these efforts along with other, similar Internet Research Agency posts: “This tactic will be increasingly common as platforms make it more difficult to grow pages and buy ads with fake personas. It will be extremely difficult to detect."