It’s Election Day, the day that—if you believe President Trump’s political rhetoric—the nefarious coup plotters of the Deep State will finally get their comeuppance from the American people.

The bipartisan intelligence community leadership, meanwhile, has struck back. Numerous former intelligence officials have spoken up against the president and defended their institutions. There have been letters. There have been op-eds and statements. The national security community, more than any other single policy community, has in a cross-ideological fashion rejected Trump.

In the face of this sustained political confrontation, you might expect that the Deep State itself—the rank-and-file intelligence community bureaucrats against whom Trump so often rails—would do what so many other Americans who oppose Trump are doing: giving money to his opponents. We certainly imagined that. And we set out to document what we expected would be a significant uptick in intelligence community support for Democrats.

We didn’t find it.

Despite the president’s rhetoric—not to mention his rejection of intelligence reporting and his attacks on key intelligence community institutions, his removal of admired leaders and installation of underqualified loyalists—members of the bureaucracy have not, by and large, exercised their right to make political contributions to his opponents. Either they have remained stubbornly apolitical, at least according to the metrics by which political scientists normally measure political engagement, or their contributions are invisible because of a raft of factors that tend to obscure them. If the intelligence community bureaucrats are supporting Joe Biden or other Democratic candidates, their tradecraft to keep it secret has been impeccable.

There is no easy way to measure the political sentiments of intelligence professionals, or government bureaucrats more generally. These things aren’t polled. While the Washington, D.C., area is certainly a Democratic stronghold on both sides of the Potomac River, the politics of the region generally masks significant pockets of conservatism—and, in any event, the intelligence community is not all local to the D.C. area. Moreover, the national security community has not traditionally been a Democratic constituency, and some parts of it are traditionally conservative-leaning. So in assessing whether the intelligence community has shifted Democratic in response to Trump, there’s a problem both of establishing a baseline and of how to measure change.

Our approach to this problem is admittedly an imperfect one: We analyzed Federal Election Commission (FEC) filings from the past four presidential cycles, from 2007 to the present. When people make political contributions, they are obliged to report their employers, and the recipient political committee is obliged to report each contribution—including the employer’s name—to the FEC. So we searched the data for individuals who identified themselves as employees of three of the most prominent intelligence agencies: the FBI, the CIA and the ODNI. We filtered the database using the terms “FBI” and “Federal Bureau of Investigation,” “CIA” and “Central Intelligence Agency,” and “ODNI” and “Office of the Director of National Intelligence.” The ODNI includes three national centers, so we also searched for them: “National Counterproliferation Center” and “NCPC,” “National Counterintelligence and Security Center” and “NCSC,” and “National Counterterrorism Center” and “NCTC.” We cleaned and sorted the data, removed false positives, and tallied the contributors.

In a nutshell, since the 2016 election, there has been a marked uptick in political giving of $200 or more to political committees by FBI, CIA and ODNI employees. And this activity has, in general, benefited Democratic-affiliated committees modestly more than it has Republican-affiliated committees. Yet relative to the size of the agencies as a whole, the level of political giving remains trivial. This suggests that the bureaucracy has remained relatively nonpartisan in a deeply partisan time. We analyze each agency below, starting with the FBI, proceeding to the CIA and concluding with the ODNI.

Before diving in, a few methodological notes and caveats. First and foremost, the 2020 data run only from Jan. 1, 2020, to July 31, 2020. This is the latest data available as of Sept. 25, when the data was downloaded for cleaning and analysis.

Second, searching FEC data with the term “CIA” produced thousands of potentially false-positive results—mostly because the initials CIA stands for a great many things other than the spy agency (a lot of people from the “Culinary Institute of America” make political contributions, for example). To address this as efficiently as possible, we categorically excluded hits from individuals located outside the D.C., Maryland and Virginia areas who described their employer as “CIA.” We did, however, include individuals from all states who identified as employees of the “Central Intelligence Agency.”

Third, as with all political contributions, if an FBI, CIA or ODNI official made a contribution or a number of contributions that totaled less than $200 in a one-year period, it does not appear in the FEC database and thus is not accounted for in our analysis.

Contributions by intelligence community officials can be masked in other ways too. For one thing, most government employees aren’t rich, and contributions totaling less than $200 are not reported—so a large degree of engagement at a comparatively low level could be taking place without showing up in the FEC reports.

What’s more, some employees may leave the names of their agencies out of the reporting, describing themselves simply as working for the U.S. government or even reporting the name of their cover agencies. This would be a particularly significant factor at the CIA.

In other words, all of the numbers we are reporting for all election cycles should probably best be understood as reflecting some indeterminate percentage of political giving from that agency but not the totality of it. Our working assumption, however, has been that the factors that induce underreporting are more or less constant, so a big change in behavior would likely be visible in the FEC reporting. 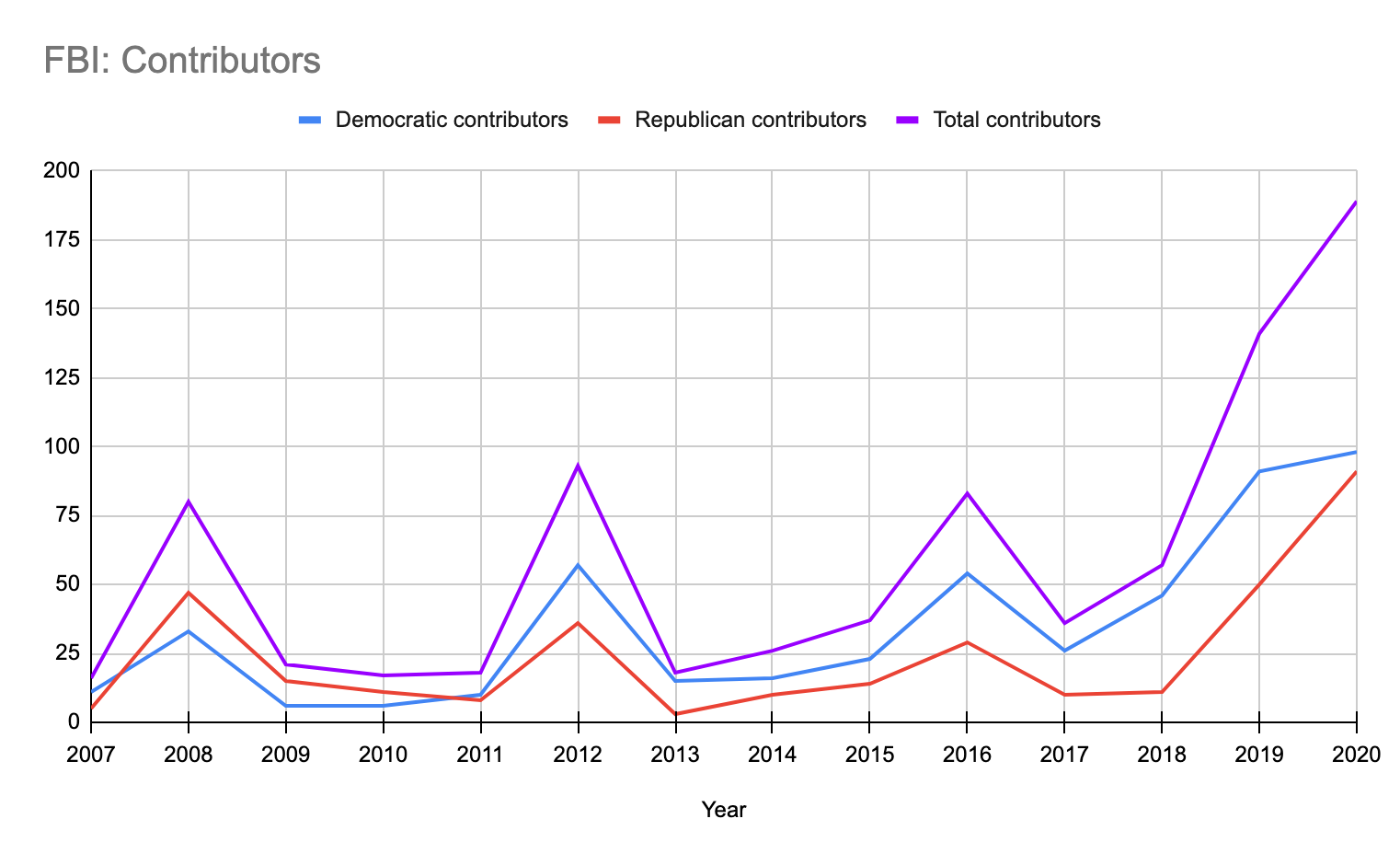 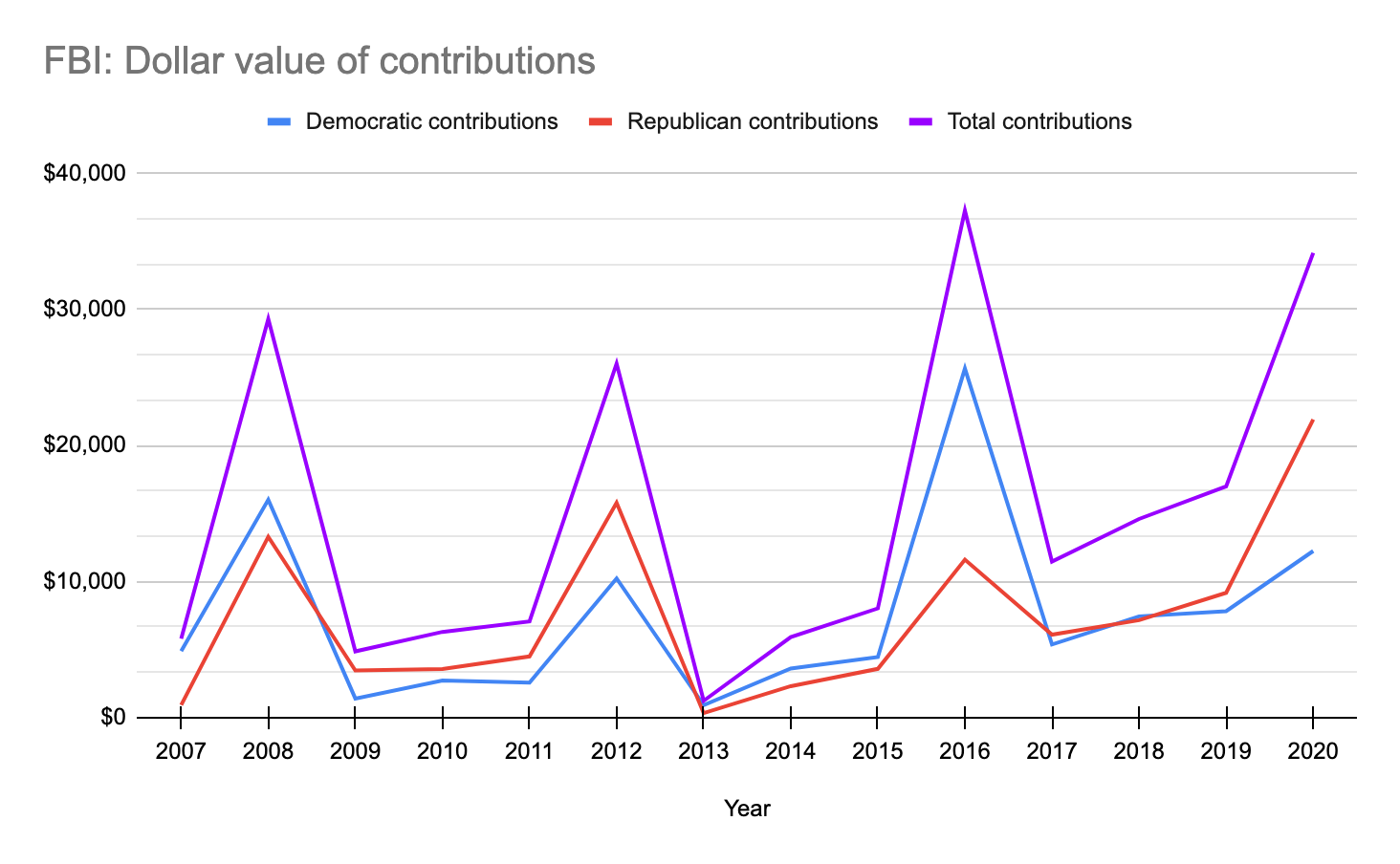 As of July 31, 189 officials have made political contributions in 2020—the highest number on record. This uptick in contributors did not favor either political party, but the dollar value of donations strongly favored Republican committees. Fifty-two percent, or 92 contributors, donated to Democratic committees, but FBI officials’ donations to Republican committees totaled $21,909, dwarfing FBI officials’ donations to Democratic committees, which came in at $12,247.

A few notes on this data, which frankly surprised us. The first point is how small the numbers are—the number of dollars and the number of donors alike. The FBI employs approximately 35,000 individuals. In 2019 and 2020, the numbers of officials reported as making political contributions represent just 0.4 and 0.54 percent of employees at the bureau, respectively. For comparison, an analysis by the Center for Responsive Politics sets the national contribution rate at 1.11 percent for this period.

This data frankly surprised us. The bureau workforce does not appear to have aligned itself with either political party. Yes, the number of donors has grown, and the number of Democratic donors has outpaced the number of Republican donors. But the dollar value of Republican donations continues to outpace Democratic contributions. So it’s kind of a wash. If the FBI workforce has shifted to the left, it’s not reflected in the visible political giving of the employee base.

From 2007 to 2016, the number of CIA officials who donated to political committees spiked in the presidential election years, with 36 contributors in 2008, 37 in 2012 and 26 in 2016. Contributors plummeted the year after, with 11 in 2009 and 8 in 2013. This broadly resembles the pattern observed with respect to FBI contributors. 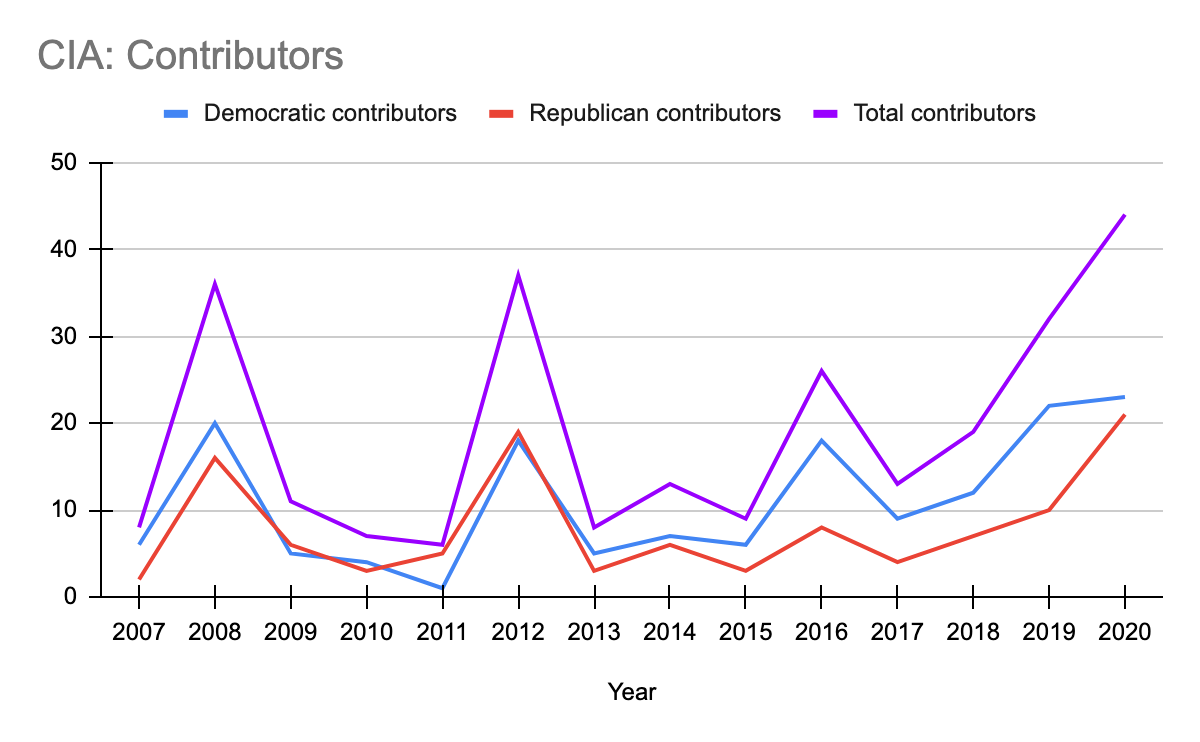 In 2018 and 2019, the number of contributors increased, as did support for Democratic committees. Nineteen people contributed in 2018, most of whom (12 contributors, or 63 percent) donated to Democratic committees. Officials donated more money to Democrats than to Republicans ($3,167 compared to $2,880). In 2019, 32 CIA officials made political contributions, and a strong majority of them (22 officials, or 69 percent) favored Democrats. The dollar value of contributions also favored Democrats ($4,263 to $2,895). 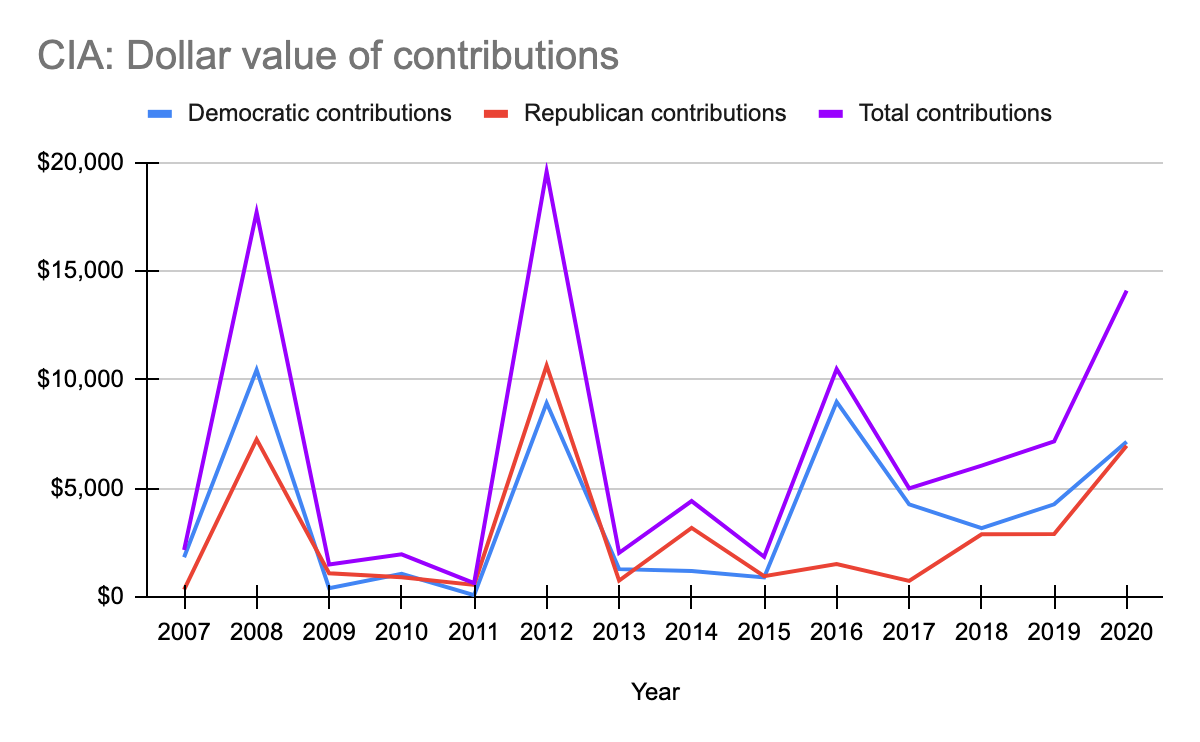 Once again, however, it’s important to note that the numbers here are probably very small. The official number of CIA employees is classified, but a leaked copy of the 2013 intelligence budget provides some clue, stating that the Central Intelligence Agency Program (CIAP) employs 21,426 individuals. In 2019 and 2020, that would mean that, respectively, just 0.14 and 0.18 percent of the individuals employed by the CIA made political contributions. The rate of contribution per employee is even lower than that of the FBI.

The number of ODNI officials who contribute to political committees is even smaller. This may partly reflect the fact that the office comprises, to a significant degree, employees detailed from other agencies—so if people are contributing, they may be identifying themselves as employed by their home agencies. The year 2020 saw the greatest number of contributors, and that was just 13 (compared to 44 CIA contributors and 189 FBI contributors).

From 2007 to 2018, the number of ODNI officials making political contributions spiked in presidential election years and plummeted right after. The overwhelming majority of contributors donated to Democratic committees during this period, and the total of donated dollars favored Democrats as well. In 2008, 2012 and 2016, only six ODNI officials made political contributions, and the overwhelming majority (83 percent or more) of these contributors donated to Democratic committees. ODNI officials did not make a single donation in 2007, 2009, 2011, 2014 and 2015. 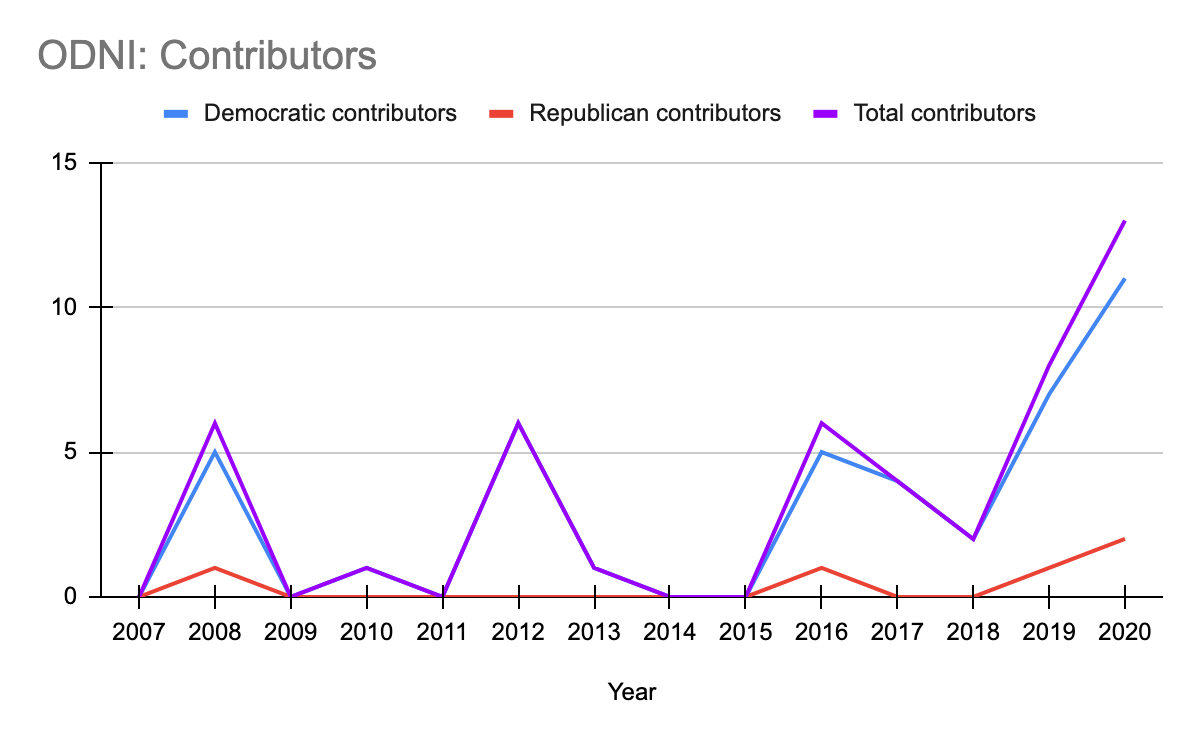 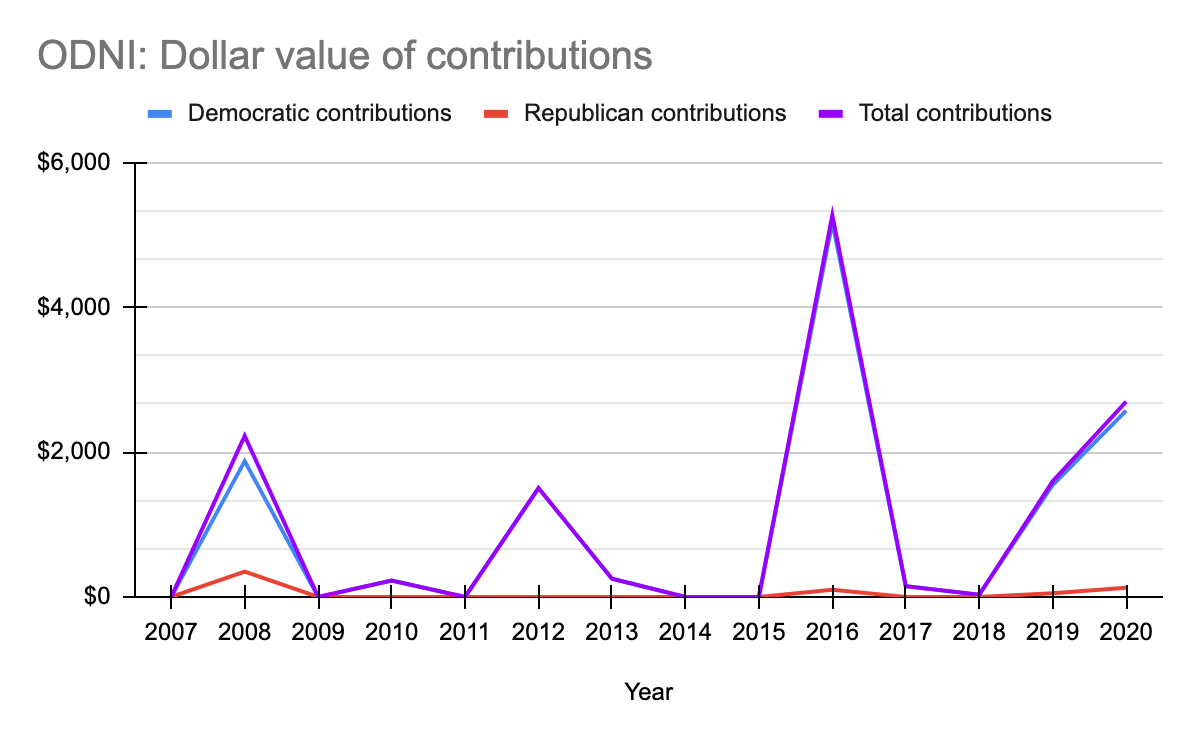 Put simply, at least as measured in reported political contributions by identified employees of the ODNI, CIA and FBI, there is no evidence that the past few years have seen a major politicization of the bureaucracy on behalf of Democrats. The remarkable thing, rather, is just how low the rates of political giving by employees of these agencies remains.

Our working hypothesis when we began this research was that Trump had politicized the bureaucracy against him and that large numbers of previously nonpolitical career officials were now giving to Democrats in defense against the attack on traditional norms of behavior toward the community. The data, however, do not support this hypothesis.

One possibility is that the hypothesis is still correct. In this scenario, large numbers of intelligence community employees are giving small (less than $200) donations in their own names, or they’re making larger donations and listing their employers in vague terms. In addition, married employees are giving through their spouses and detailees are listing their home agencies, so a rather large upswing in giving is invisible in the data.

The other possible explanation is that the norm of apolitical behavior among the intelligence bureaucracy is extremely strong and has not changed much in the face of significant antagonism from the president and the Republican Party. Being politically active is not especially smiled upon, and despite the provocations from the president, people may fear disapproval of colleagues or agency leadership.

Our own guess is that a mix of factors is probably at work here. That is, some degree of blue shift inside the community may well be real and masked, but the apolitical expectations are no doubt very strong as well. In any event, if the Deep State coup plotters are secretly funding the Democratic Party, they are doing a very good job keeping it secret.

Elizabeth McElvein is a third-year law student at the University of Michigan. Prior to law school, she was an oversight and investigations staffer at the House Judiciary Committee and a research assistant at the Brookings Institution.
More Articles