In June 2020, forces aligned with Libyan General Khalifa Haftar suffered further losses in Libya’s long civil war. As news broke that his Libyan National Army was withdrawing from Tarhuna, social media was immediately flooded with jingoistic propaganda. Accounts loyal to both the Government of National Accord in Libya—supported militarily by Turkey—and the Libya National Army—supported by Egypt, the United Arab Emirates (UAE), Saudi Arabia and Russia—attempted to spin the dynamic events on the ground in their favor.

This near-immediate online propagandizing is nothing new in Libya or the Middle East. Propaganda and disinformation, particularly campaigns originating from state-backed entities, are long-standing features of the conflict. For instance, a recent report found evidence of coordinated online activity concerning Libya that dates as far back as 2013. As the conflict has evolved, so too have these foreign-backed information operations, reflecting shifting regional and international interests and alliances.

When Gen. Khalifa Haftar withdrew from Tarhuna in June 2020, we captured a tranche of Twitter data and discovered a likely state-backed information operation, demonstrating how regional actors attempted to manipulate the narrative of Haftar’s withdrawal in support of their interests.

Foreign intervention online, both real and perceived, has broadly undermined the confidence of civil society in the authenticity of political discourse across the region and beyond. State-backed information operations targeting Libya have led to a deeply polarized information landscape. Twitter and Facebook have been substantially polluted by automated accounts and fake pages; narratives pushed by these inauthentic networks are often filtered through news sources that are controlled by regional interveners but that masquerade as neutral journalism.

This information ecosystem obscures suspicious origins and legitimizes foreign-backed narratives. Non-state digital marketing firms have become increasingly important in creating this environment. These firms are often responsible for conducting and administering operations, allowing states to outsource the technical expertise necessary to conduct influence campaigns while also providing them with plausible deniability. The use of these third-party social media marketing firms to conduct information operations related to Libya’s civil war mirrors the use of foreign mercenaries on the ground, with varying degrees of state sanction and affiliation.

Egypt, the UAE, Saudi Arabia and Turkey have all been implicated in information operations throughout the duration of Libya’s civil war. These campaigns reflect sharply defined regional rivalries and evolving interests on the ground.

Previous campaigns exposed by researchers involved coordinated and inauthentic hashtags trending on Twitter, some of which would occasionally appear on Facebook. In March 2019, Democracy Reporting International identified a hashtag campaign that anticipated Haftar’s attempt to seize Tripoli. Later in 2019, the Atlantic Council’s Digital Forensic Research Lab identified another campaign supportive of Haftar; the strongly pro-UAE stance suggested it was created by supporters of the UAE. Twitter has also made a number of important removals of accounts that were affiliated with state-backed information operations related to the conflict. Notably, account takedowns announced in September 2019, December 2019 and April 2020 have been tied to Egyptian, Emirati and Saudi Arabian-backed information operations in Libya. Broadly, these campaigns strongly supported Haftar and the Libya National Army, opposed Qatar and Turkey, and were coordinated with events on the ground. There have also been multiple removals of Facebook pages that the company claims were tied to state-backed influence operations. Both Russia and Egypt have been implicated in state-backed operations on Facebook targeting Libya.

As Libya National Army forces withdrew in June 2020, a series of highly politicized hashtags began trending on Twitter. We downloaded and analyzed the data from 10 separate hashtags that trended between June 5 and June 28. Our findings build on trends identified in previous research.

The first batch of hashtags we analyzed were strongly aligned with the Egyptian, UAE and Saudi axis. “The Egyptian Army” (#الجيش_المصري) trended in Arabic on June 8—the day the cease-fire outlined in Egyptian President Abdul Fattah al-Sisi’s “Cairo Declaration” was due to take place. In total, we collected and analyzed a dataset of 31,461 tweets with the hashtag and identified activity that suggests it was both coordinated and inauthentic. Activity that is coordinated and inauthentic uses multiple fake accounts in concert to mislead users about the popularity of a hashtag through artificial inflation. While definitive attribution of these campaigns is difficult, given the content of the hashtag and previous disclosures by both Twitter and Facebook, it is highly likely that this campaign was created by entities affiliated with the Egyptian state.

The hashtag was filled with extreme patriotic messaging in support of the Egyptian military. A time lapse of the hashtag revealed two suspicious tweet spikes: The first occurred at 2:51 a.m. on June 8, when 367 tweets with the hashtag were produced in a single minute; a few hours later, there was another spike of 356 tweets in a single minute (Figure 1). 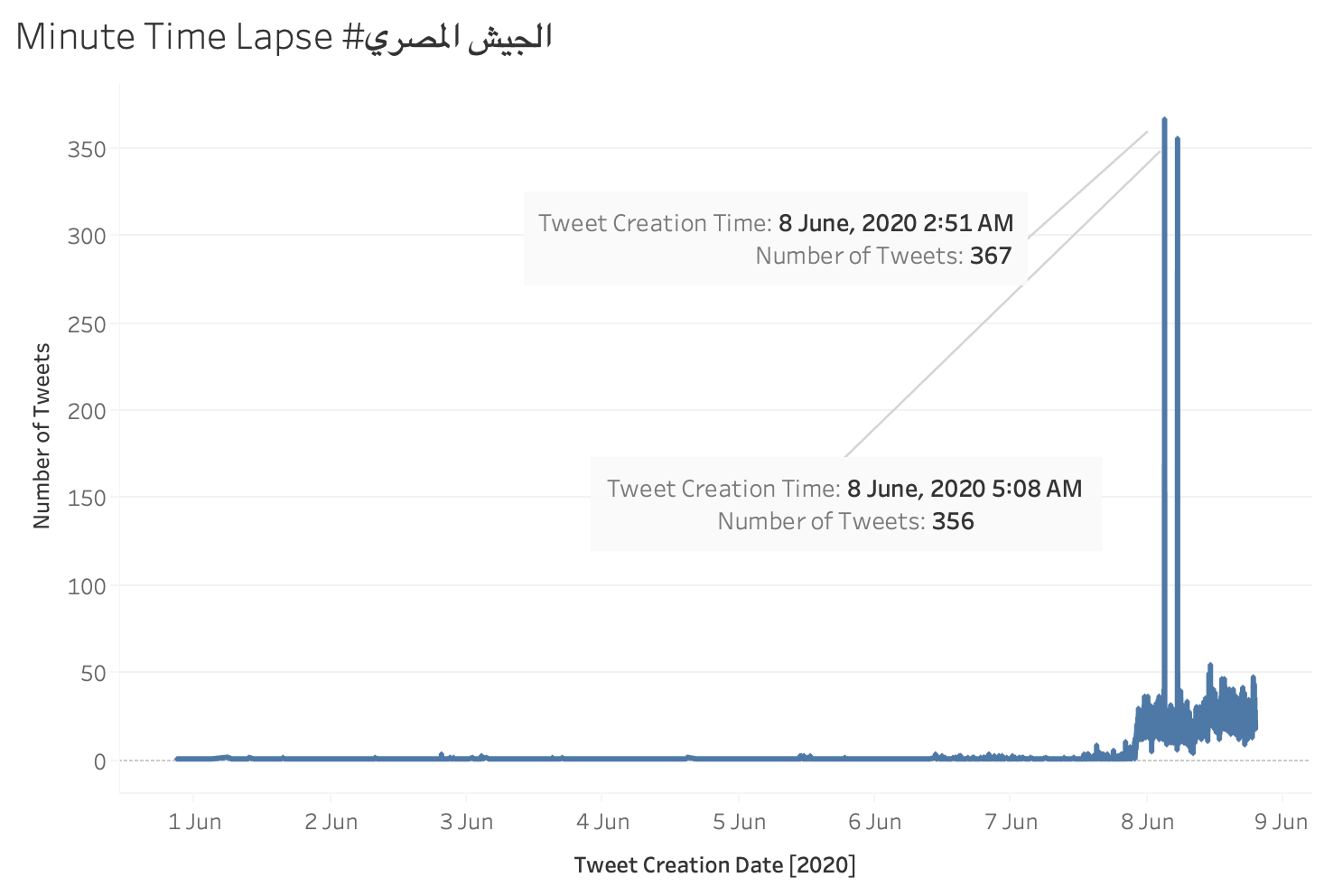 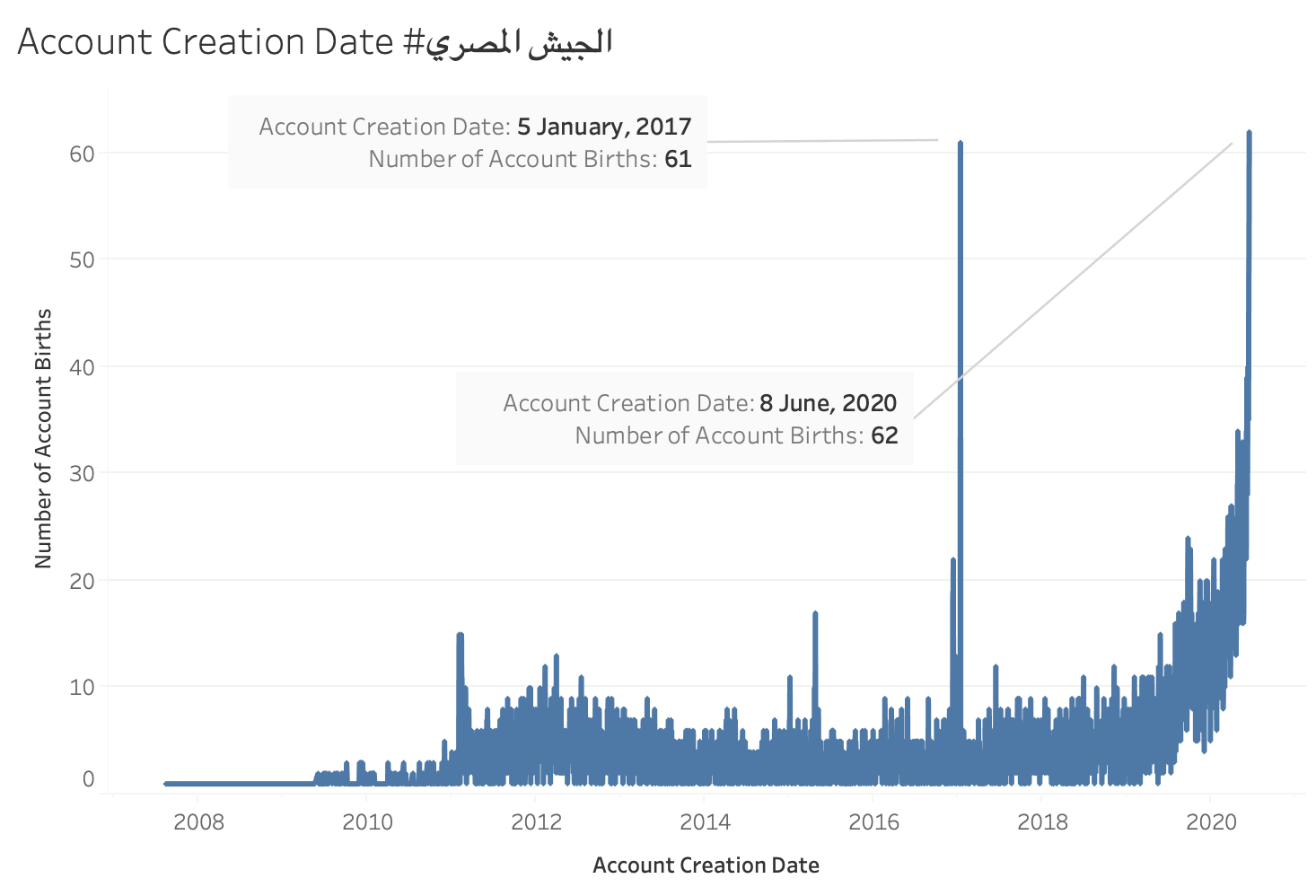 After manually investigating these 123 accounts, we found suspicious similarities in the style of profile pictures included within each group. Many of the accounts were already flagged by Twitter for suspicious activity and shared the same or similar profiles and banner photos as other accounts. 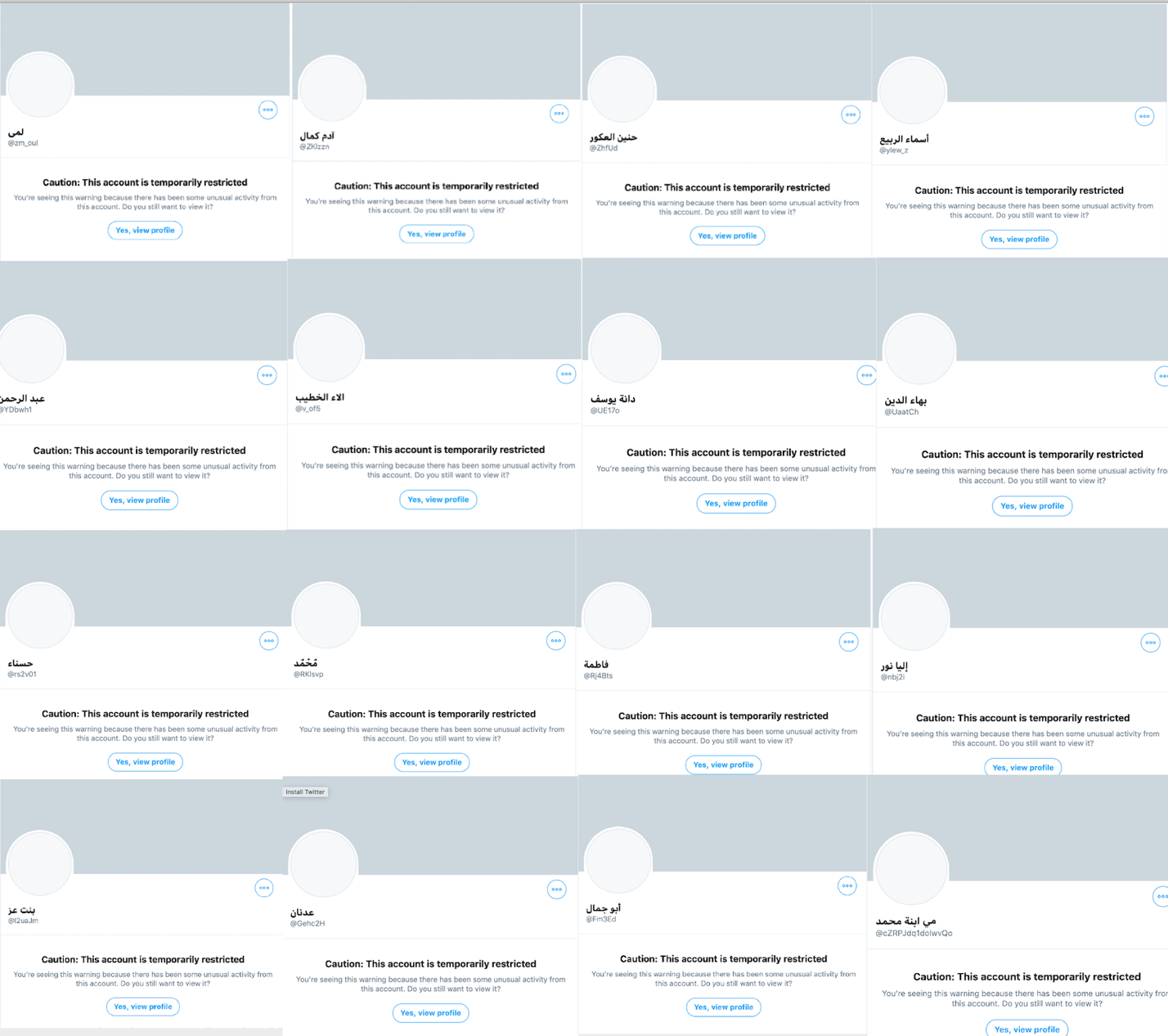 Figure 4. Many of the accounts created on these two dates were already suspended or restricted by Twitter.

Analysis of the relationships between these accounts found the network to be incredibly dense, meaning that all 123 accounts were equally retweeting each other, with no single or smaller group of “influencer” accounts dominating (Figure 5). The network is an incredibly dense echo chamber, retweeting only within its own network and rarely interacting with accounts outside of those that were created on the same day. 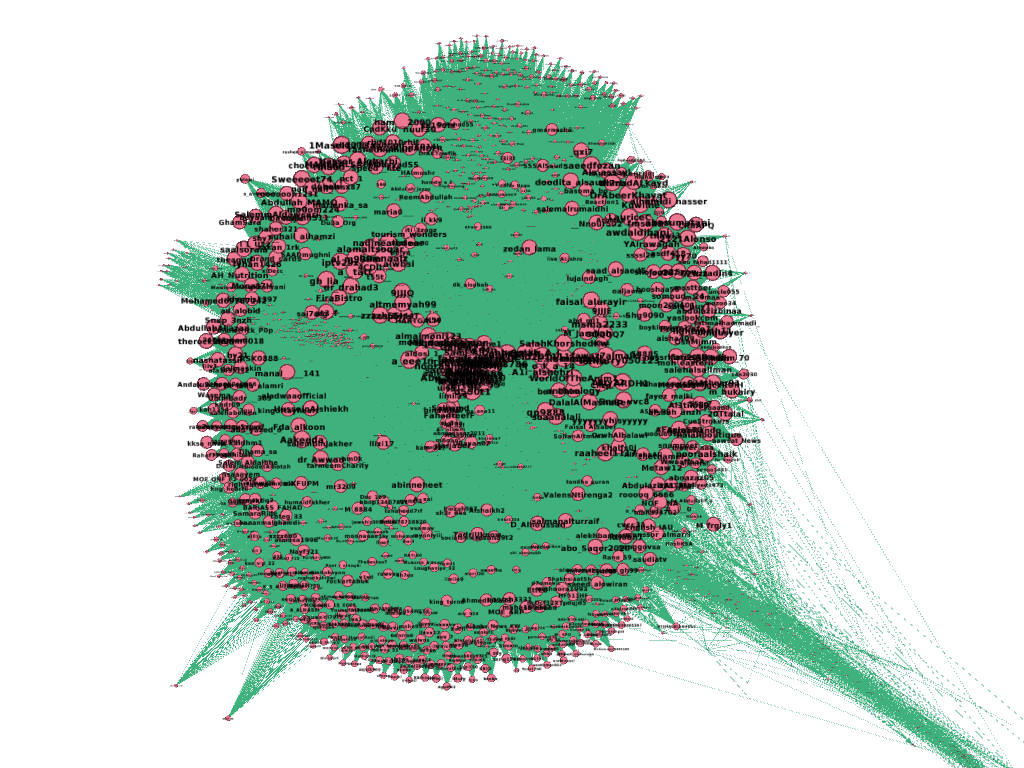 Figure 5. Gephi graph showing the density of the network of these accounts.

This coordinated, inauthentic campaign in support of the Egyptian army reflected changing dynamics on the ground. Whereas previous information operations strongly praised Haftar and supported his campaign for Tripoli, this online campaign did not focus on the Libyan general—indicating the departure of Haftar from the center of Egypt’s narrative on Libya.

As Haftar withdrew, Egypt’s emphasis shifted quickly to shoring up domestic support and promoting domestic interests—namely, security along the western border. The specious promotion of the Egyptian military online demonstrates how digital manipulation is a low-cost alternative to direct military engagement. The most extreme language appears online, providing an outlet for nationalistic militarism at arm’s length from the regime. Domestically, this approach creates the perception that the regime is responding aggressively to threats to Egypt’s western border; for Egypt’s regional rivals, it clearly signals that these threats are Egypt’s red line. Bellicose rhetoric is reserved for the online theater and reflects Cairo’s underlying strategic objective: securing its porous western border.

Another hashtag, “Erdogan is a war criminal,” also exhibited suspicious characteristics. This tag trended on June 8, and we collected 12,995 tweets containing it between June 2 and 9. Tweets contained in the hashtag included vitriolic attacks on Turkish President Recep Tayyip Erdogan, with crude jokes and memes that often portrayed him as an ape. Users tweeting on the hashtag were located in Egypt, Saudi Arabia, Kuwait and the UAE; however, the importance given to this location data must be approached with caution as accounts self-report their own locations. As with the previous hashtag, there was a suspicious spike of 151 tweets in a single minute at 5:36 p.m. on June 8. 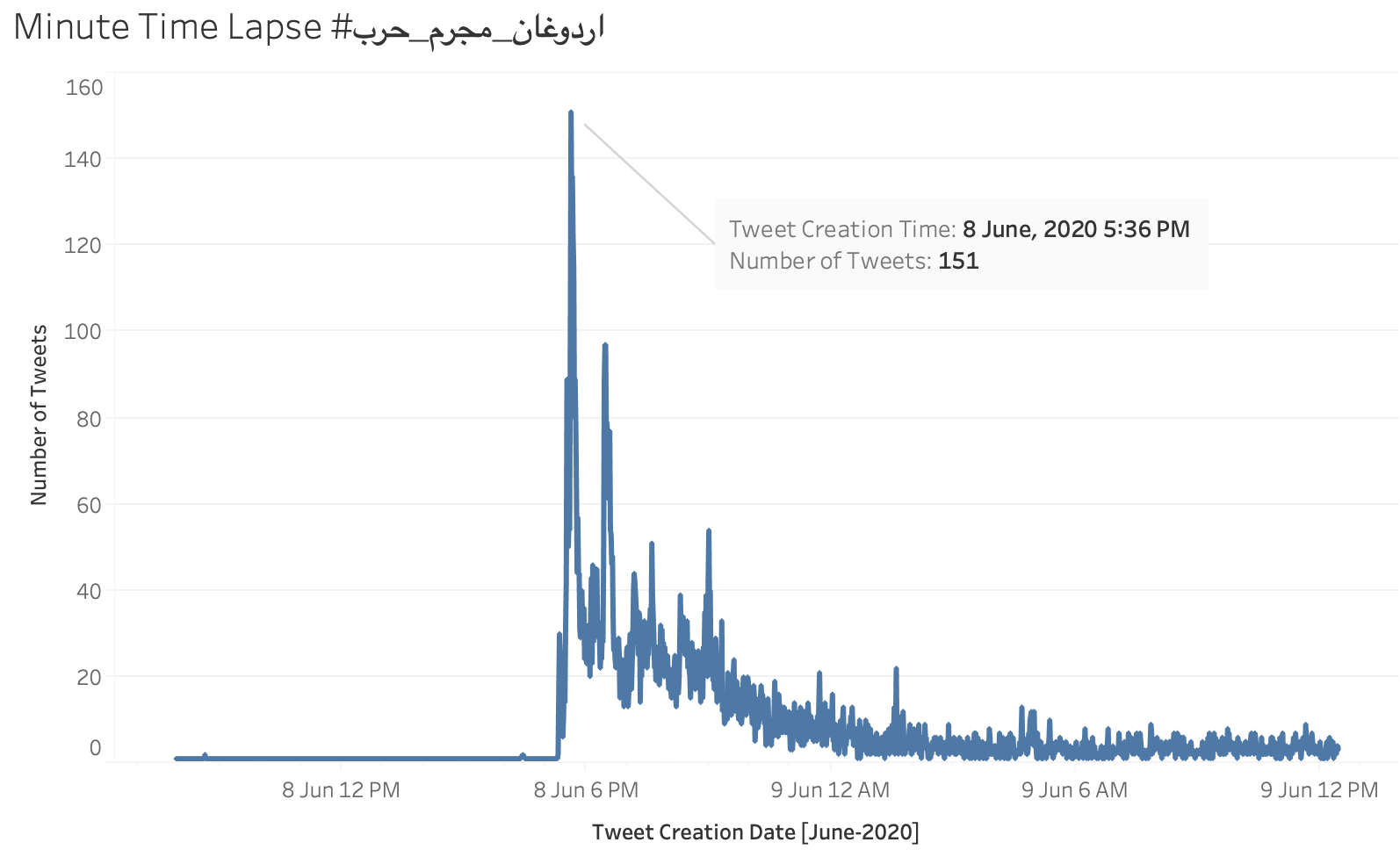 Figure 6. Minute time-lapse for the hashtag “Erdogan is a war criminal” shows a suspicious number of tweets created in a single minute.

We also identified a spike in account births, with 133 accounts created on June 8, the day the hashtag trended (Figure 7). 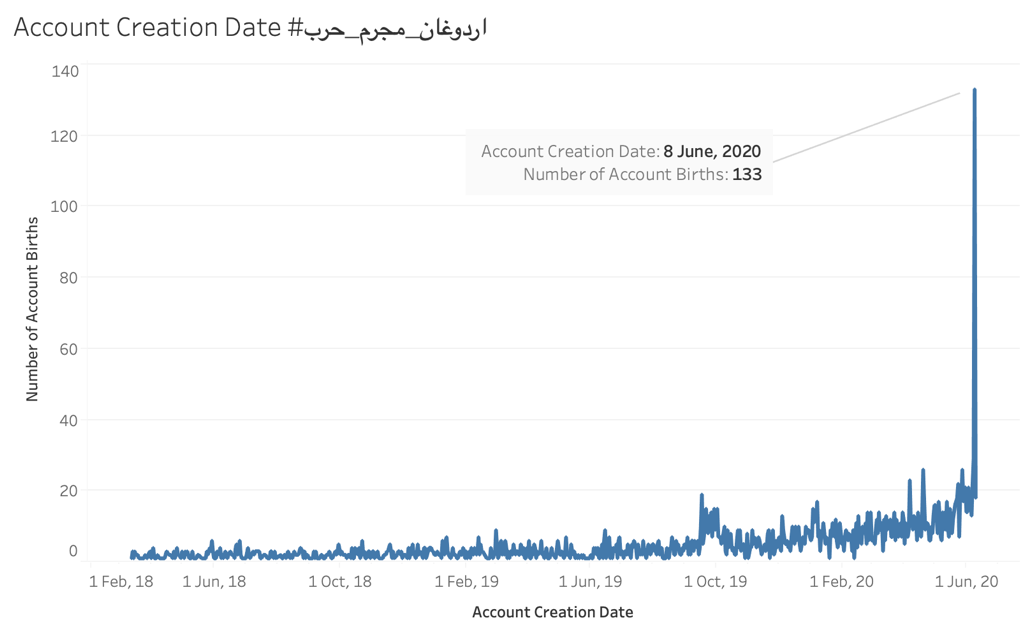 Figure 7. Graph of account creation dates for accounts tweeting on “Erdogan is a war criminal” hashtag, showing one suspicious spike of account births.

Interestingly, we found that Ahmed Moussa, an Egyptian presenter on Sada El-Balad satellite channel, announced the creation of this hashtag live on his show (Figure 8). This could be part of a tactic called “hashtag laundering,” where traditional media announce and promote hashtags to obfuscate their inauthentic origins. This technique was identified in previous information operations targeting Libya. For example, Stanford’s Internet Observatory found many examples of this technique, whereby media outlets would report on inauthentic hashtags in an effort to make them appear genuine and authentic. At the same time, it is also possible that a number of Egyptians saw the presenter’s plea to tweet the hashtag, signed up for Twitter immediately, and tweeted as they were told. This demonstrates how traditional media interact with information campaigns on social media to legitimize and normalize narratives. 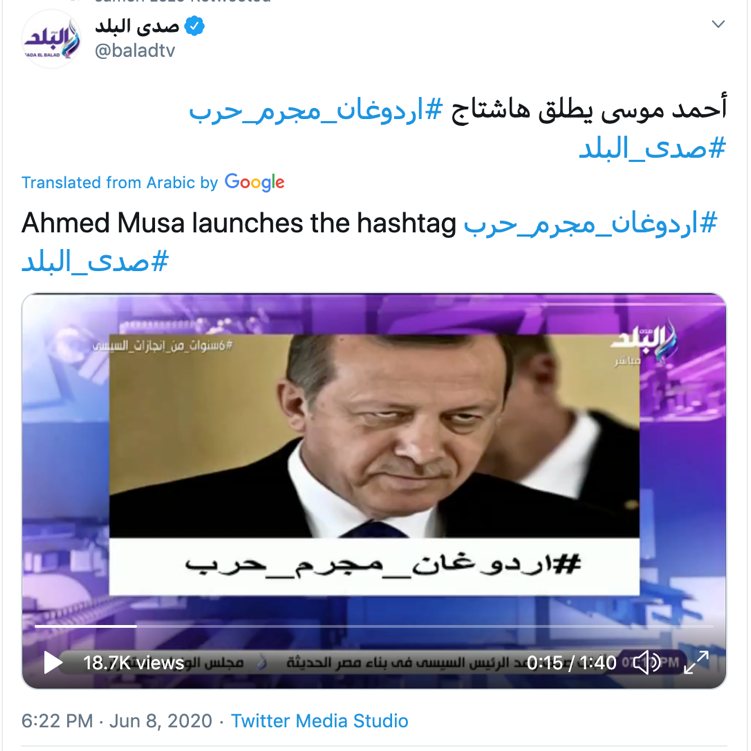 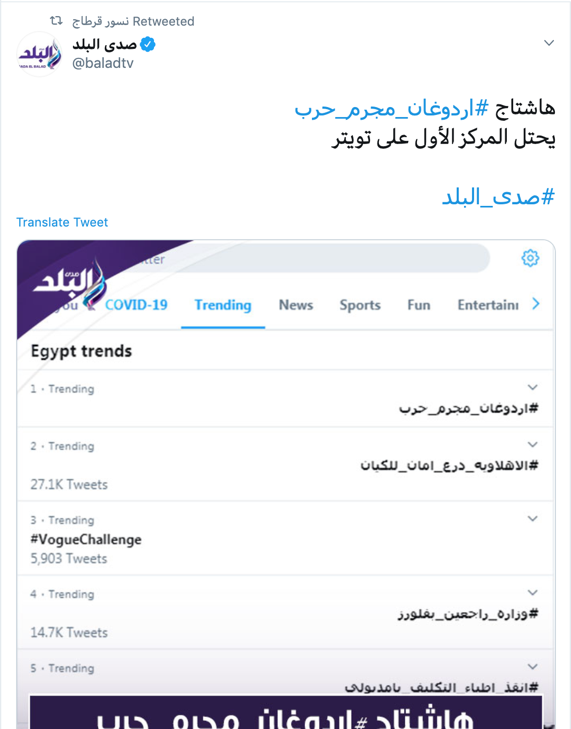 Figure 8. Ahmed Moussa launches the hashtag “Erdogan is a war criminal” on the Sada El-Balad channel.

The tactics and techniques identified in these trending hashtags reflect previous research conducted on information operations targeting Libya. In September 2019, Twitter removed 271 accounts linked to digital marketing firm DotDev based in both Egypt and the UAE. Researchers analyzed the data released by Twitter and found that these accounts repeatedly spread propaganda targeting the Libyan conflict. In December 2019, Twitter removed 88,000 accounts connected with another social media marketing firm, SMAAT, based in Saudi Arabia. Twitter alleged that these accounts were part of a large state-sanctioned information operation conducted by Saudi Arabia that would target Libya. In March 2020, Facebook removed 55 pages that the company said were affiliated with a digital marketing firm named Maat, based in Egypt. Another takedown by Twitter in April 2020 removed accounts tied to Egypt, the UAE and Saudi Arabia, all of which contained evidence of operations targeted at Libya.

These state-backed campaigns are pervasive and are conducted through the relative safety of third-party digital marketing firms that provide states with discretion and the technical knowledge to conduct complex influence operations. This digital theater of the war is dominated by non-state companies, acting on behalf of their state backers. Influence campaigns on Twitter are often connected with those on Facebook, where fake pages masquerade as legitimate news sources to further spread disinformation and propaganda narratives. News pages, while appearing neutral, act to launder and legitimize propaganda. Finally, there is clear coordination and sharing of resources between states in this regional alliance.

While the Egyptian, Emirati and Saudi axis overwhelmingly dominates information operations targeting Libya, some campaigns and hashtags in support of Turkey’s aims have surfaced as well. In June 2020, we observed two diametrically opposed hashtags, both of which exhibited suspicious behavior: “Libya, graveyard of Ottomans” and “Libya, graveyard of Sisi[.]” This phenomenon of battling hashtags with nearly identical language has been observed before in the Libyan context.

Uncovering these coordinated campaigns plays an important role in revealing foreign hands. Intervening states actively alter the discourse around important events in conflict to serve their interests; cutting through this propaganda enables a better understanding of the dynamics of these events and the views of those impacted on the ground. Moreover, uncovering these manipulated narratives leads to a better understanding of the interests these actors are pursuing.

It’s important not to overemphasize the impact of these campaigns. Coordinated, inauthentic behavior orchestrated by foreign interveners occurs within a wider ecosystem of authentic online engagement, and assessing the extent to which these campaigns have impacted Libyan public opinion is difficult. More research is needed to understand the relationship between inauthentic activity and authentic activity, and how these contests shape domestic, regional and international attitudes toward the conflict. With only 9 percent of Libyans on Twitter, campaigns likely play out only within small circles of the country’s population. Instead, the primary target audience may have been international stakeholders, the media or perhaps the governments themselves.

Alexei Abrahams is a data scientist with Harvard University's Shorenstein Center, where he researches information security issues relevant to the Middle East. He holds a PhD in Economics from Brown University and consults for the World Bank.
More Articles

Joey Shea is a nonresident fellow at the Tahrir Institute for Middle East Policy focusing on information controls, security, political repression, and the impact of technology across the Middle East and North Africa. Her research examines the political, legal, and economic contexts of network filtering and monitoring technologies, digital media manipulation, including misinformation, disinformation and propaganda, and targeted attacks. She researches the impacts of new technologies on crisis and conflict and regional cybersecurity dynamics. She also consults for the World Bank.
More Articles
Published by the Lawfare Institute in Cooperation With