March 21 to March 22, just prior to Special Counsel Robert Mueller’s delivery of his report on the Russia investigation to Attorney General William Barr, we conducted a nationwide survey asking respondents a series of questions regarding Mueller’s investigation. From March 26 to March 28, after the release of Barr’s letter with his top-line summary of the investigation’s conclusions, we conducted another nationwide survey asking respondents the same series of questions to gauge how the report’s release and subsequent media coverage affected the public’s opinion of the investigation. These polls reveal a dramatic increase in confidence in Mueller’s investigation, driven almost entirely by a complete reversal in Republican respondents’ opinions of Mueller and the investigation. But equally dramatic are results that show, with the exception of Republicans, the public believes additional investigation is needed or remains unsure of whether it is.

Republicans Drive a Surge in Confidence in Mueller’s Investigation

Before and after Mueller delivered his report to the attorney general, we used Google Surveys to ask respondents several questions about the integrity of Mueller’s investigation. Specifically, we asked:

The questions elaborate on a question we ask in our monthly polls on confidence in government on national security matters, wherein we ask one confidence question on Mueller’s fairness and objectivity. The first question we asked in this pair of surveys is the same question we’ve asked every month since October 2017. On our scale—which ranges from a score of 1, not at all confident, to 5, completely confident—the average confidence score for this question has hovered around or just below 3, indicating the public has modest confidence in Mueller. Average confidence in Mueller’s fairness and objectivity was 3.11 in the pre-report poll, which was up from 2.89 in our February monthly poll, and it jumped further to 3.40 in the post-report poll.

Before going further, we offer a note on the samples in the pre- and post-report polls. The two polls have different overall sample sizes; the pre-report poll has 1,545 responses, while the post-report poll has 4,002. But importantly, both polls have nationally representative samples. The pre-report poll was fielded on March 21, but by the afternoon of March 22 it became clear that Mueller would deliver his report within hours. Given this, we chose to retrieve the completed responses that afternoon (Google Surveys weights dynamically throughout a survey, so again, the retrieved results are nationally representative), which gave us a clean sample of 1,545 responses all before the handoff of the report. While the survey continued running, we analyzed only the pre-report portion of the sample. The post-report poll was fielded as usual, beginning on March 26, which yielded the sample of 4,002 responses.

Ironically, while driven by partisan polarization, the result is a suddenly and quite remarkably unpolarized electorate with respect to the Mueller investigation. In the wake of the report’s delivery, between 49 and 55 percent of Democrats, Republicans, and Independents alike express high confidence in Mueller’s fairness and objectivity. 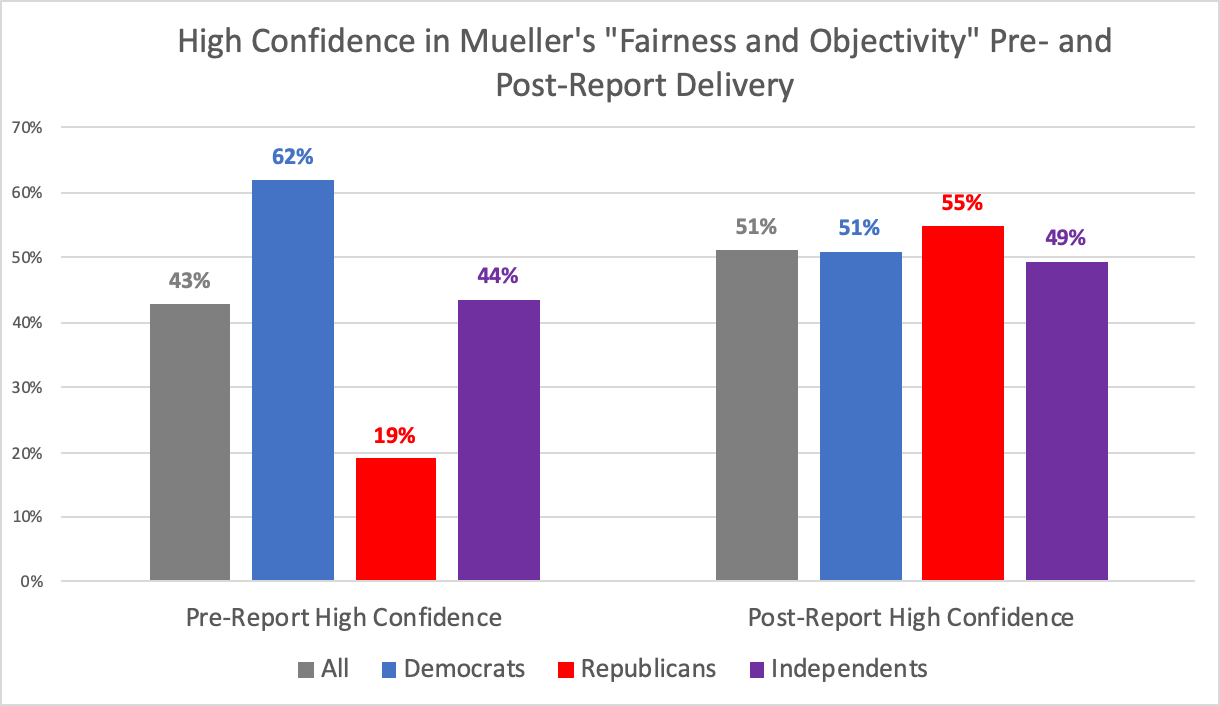 The next three questions covered confidence in Mueller’s investigative thoroughness and reporting on the following: potential misconduct by the Trump campaign or administration, links between the Russian government and Trump’s campaign, and any efforts to obstruct Mueller’s investigation. The results were broadly consistent with the results for the preceding question on Mueller’s “fairness and objectivity.” 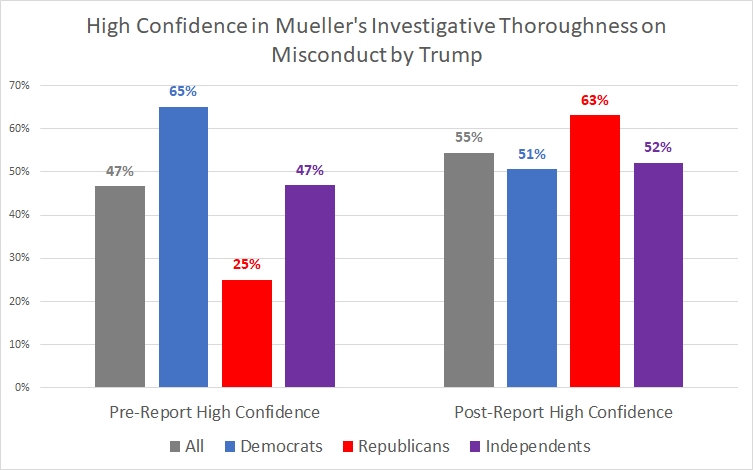 High confidence in Mueller’s thoroughness in investigating links between the Russian government and the Trump campaign or administration mirrored the preceding question on general misconduct by Trump et al. 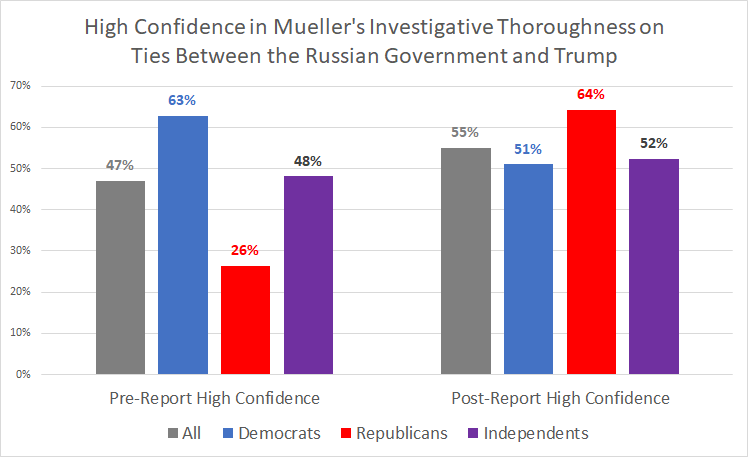 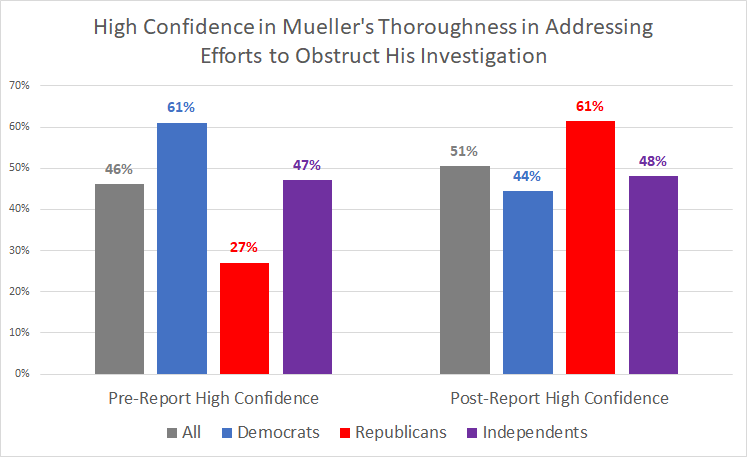 Only Republicans Are Certain No Further Investigation Is Needed

In addition to questions on the thoroughness and integrity of Mueller’s investigation, we also asked about the need for more investigation. Specifically, we asked:

The results show that the public does not consider this a closed case. In our pre-report poll, 40 percent expected no further investigation would be needed after the report was delivered, 31 percent believed additional investigation would be needed, while 29 percent did not know. In the post-report poll, this nine-point “no” margin for additional investigation shrank to four points; 38 percent said no, 34 percent said yes, while 28 percent did not know. The share of Republicans saying no jumped from 35 percent pre-report to 64 percent post-report. The share of Democrats plummeted from 40 percent to 14 percent between polls. Pre-report, 42 percent of Independents expected no further investigation would be needed, and this number dropped six points to 36 percent in the follow-up poll.

On this point, at least, the partisan divide remains very clear in the current data. 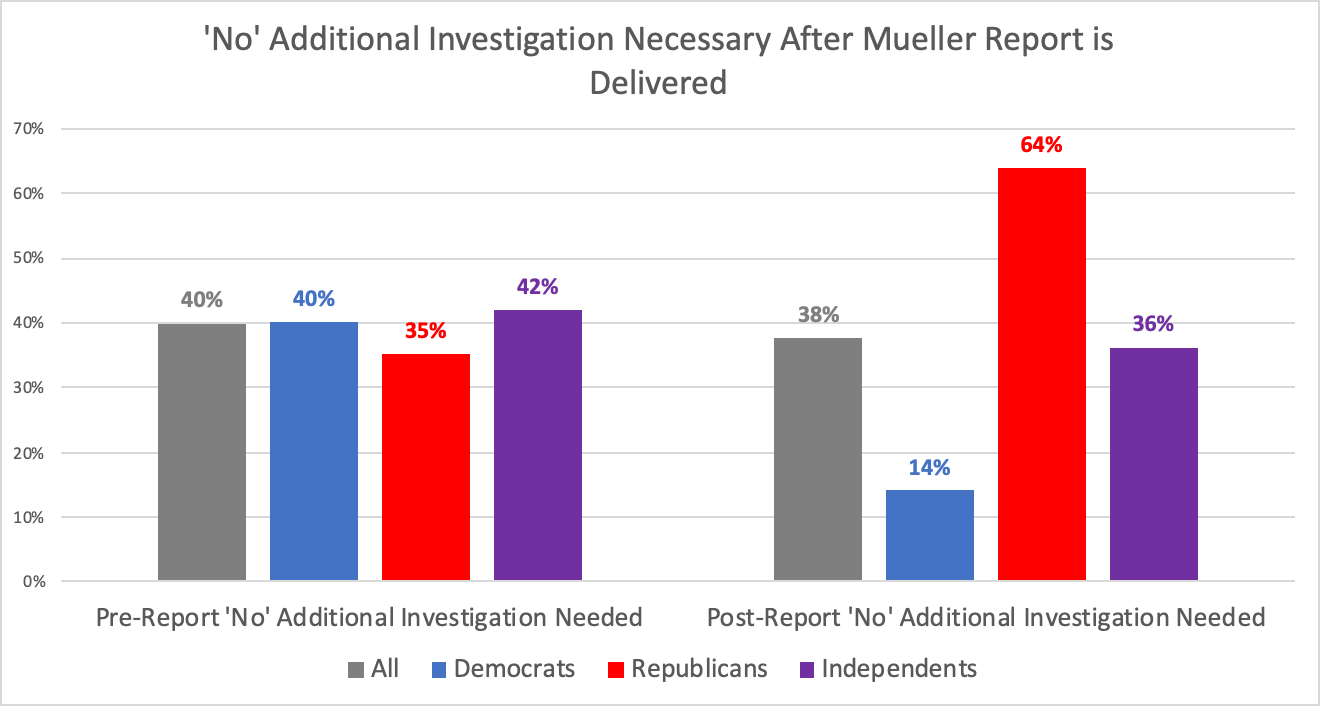 The bottom line is that, between the pre- and post-report polls, Republicans’ confidence in the investigation increased dramatically, confidence among Democrats slipped, and Independents’ confidence ticked up. But it should not be lost that a majority of Democrats retained high confidence in Mueller on all but one question, despite the absence of explosive conclusions in the Barr letter, and Independents are the least persuaded—either way—by evidence released since the report was delivered. On further investigation, only Republicans view this as a closed case; the share of Democrats answering no to the need for further investigation dropped swiftly between polls, while this share of Independents also declined.

From March 21 to March 22 and again from March 26 to 28 we used Google Surveys, which is supporting this project with a large in-kind donation of access to its survey platform, to ask a variety of questions related to Mueller’s investigation. Respondents are internet users age 18 and older who answer “surveywall” questions on websites that use Google Opinion Rewards for Publishers to access content. Surveys appear on a network of more than 1,500 sites, including USA Today and the Financial Times. For more information on Google Surveys’ methodology, including questions regarding sampling bias and inferred demographics, please see Google’s white paper on the topic. Benjamin Wittes and Emma Kohse also discussed criticisms and advantages of the Google Surveys methodology at some length in this paper.