In July 2017, we began a polling project to measure public confidence in government institutions on national security matters on an ongoing basis. This post provides our data for the month of November 2018. It includes public perceptions of government institutions and of the two major political parties’ handling of national security; about the public’s comfort with intelligence authorities; about the president’s handling of key national security issues; about Special Counsel Robert Mueller’s investigation; and about ongoing military operations.

From November 25-27, 2018, we used Google Surveys to ask respondents the following questions about confidence in institutions:

In November, confidence in institutions to protect U.S. national security remained relatively stable across all five institutions analyzed in this polling project. On a scale of 1 (“No confidence”) to 5 (“High confidence”), the average score for each institution from highest to lowest was: 3.93 for the military, 3.26 for the intelligence community, 2.99 for the federal courts, 2.83 for the president and 2.64 for Congress.

The intelligence community saw a marginal decline in confidence since our October polling, from a score of 3.31 in October to 3.26 in November. This could be just noise, but it might also be the result of President Trump’s exclamation point laden refutation of the Central Intelligence Agency’s “high confidence” assessment that Saudi Crown Prince Mohammed bin Salman ordered the death of Washington Post contributor Jamal Khashoggi. The president’s average confidence score of 2.83 dropped insignificantly from his all-time high score of 2.84 in our October polling. Confidence in the military also fell marginally, from 3.97 in October to 3.93 in November. The federal courts and Congress, on the other hand, saw marginal increases in confidence, of .02 and .03, respectively. None of these changes seems significant. 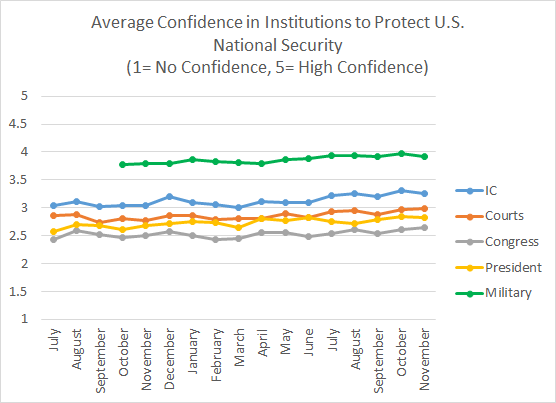 Confidence in Both Parties Reverts to the Mean

In October, just before the 2018 elections, we saw confidence in both political parties to protect national security increase noticeably, to what were all-time highs in the history of this polling project. In November, those gains in party support were completely erased. 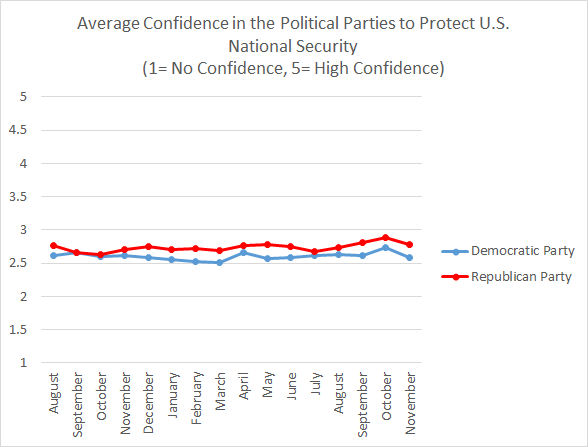 The margin for our second question on partisanship and national security—“Which of the parties will do a better job protecting the country from international terrorism and military threats?”—held relatively steady this month. On this question, Republicans retain a healthy advantage when respondents are asked to choose between the parties or options of “neither” or “don’t know.” When asked in this manner, 35 percent of respondents chose the Republican Party, while 24 percent chose the Democratic Party; 23 percent chose “don’t know,” and 19 percent chose “neither.” The Republican advantage over Democrats on this question increased 2 points between October and November.

In late November we once again asked respondents, “How comfortable are you with the powers of the U.S. intelligence community? Do intelligence agencies in your view have not enough authority or do they have too much authority?” There was a slight drop in the average response since October (from 3.1 to 3.06 in November). As in all previous months that we’ve asked this question, respondents lean slightly toward the intelligence community having too much authority. However, also as in all previous months, far and away the most common response to this question (45 percent) is a neutral 3 on our scale. And 73 percent of respondents chose one of the middle three options, not either 1 or 5. Note that this number has been remarkably stable in the period in which we have asked this question, ranging from a low of 3.03 to a high of 3.18 seemingly randomly. This period has been one in which the country has not experienced either notable intelligence failures, terrorist attacks, or intelligence scandals. The stability of these numbers during such a period offers a good baseline against which to measure any changes if and when the political process suddenly lurches to consider either expanding or contracting intelligence authorities. 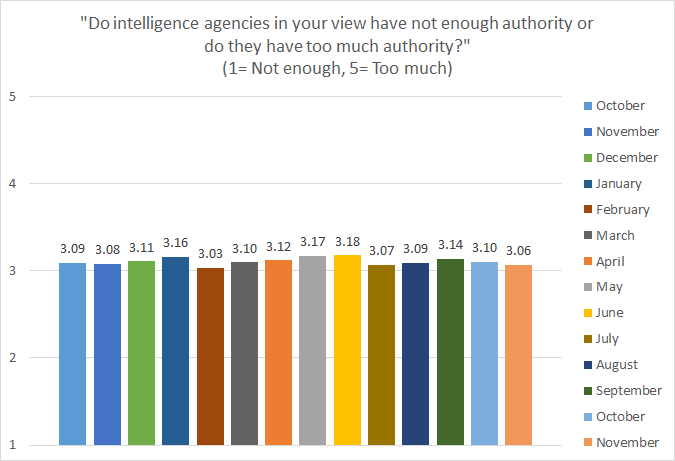 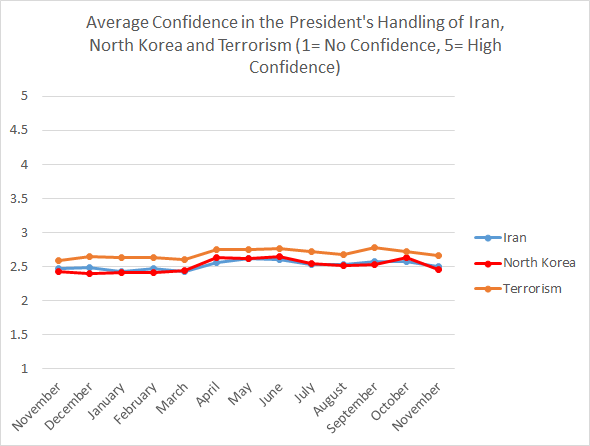 As we have since October 2017, we once again asked the public about its level of confidence in Robert Mueller’s “fairness and objectivity” at the end of November; the average score was a 2.93 on our scale, a slight drop from the all-time high point for confidence in Mueller in October (2.96).

Confidence in the Mueller investigation has tended to spike when the special counsel indicts people or reaches plea agreements. Given this, it is noteworthy that confidence in Mueller has increased—albeit gradually—over the late summer and early fall, which coincided with the quiet period of the Mueller investigation during which public actions were not taken in order to not disrupt the midterm election season.

This finding again this month tends to conform with exit polling data on Election Day, which showed slightly more voters disapproving than approving of Mueller’s handling of the investigation. Notably, according to the NBC News exit poll, voters are divided sharply on partisan lines on this question, with 61 percent of Democrats approving of Mueller, compared to just 20 percent of Republicans.

Note that this poll question was taken just before the spree of recent Mueller activity: the latest plea deal with Michael Cohen and the spree of sentencing memoranda and filings in other cases. The data coming at the end of the December will thus provide an interesting window into how much, if at all, the recent flurry of activity is influencing public perceptions of Mueller’s investigation. 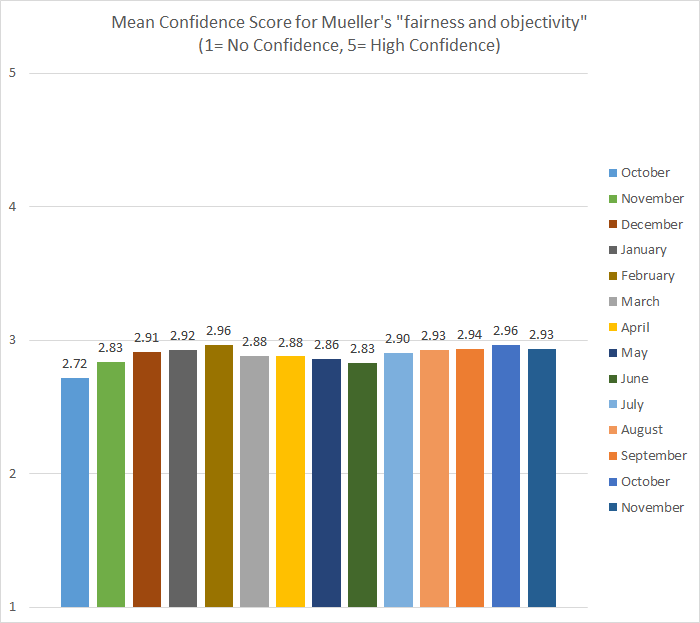 As the trend line in the chart below indicates, confidence in these military operations has wavered little since we began asking about these conflicts a year ago, a result that is perhaps explained by scant media attention toward these operations in recent months. 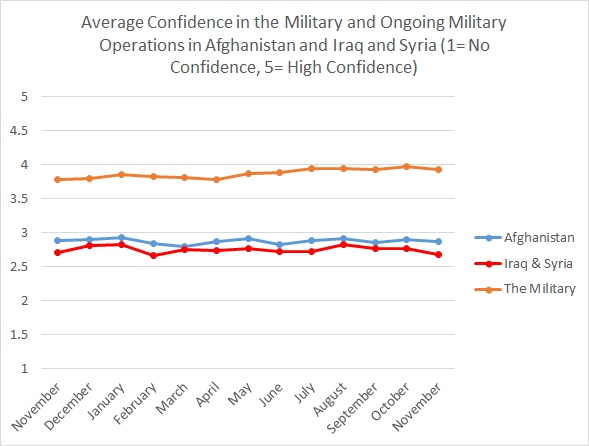 From November 25-27, we once again used Google Surveys, which is supporting this project with a large in-kind donation of access to its survey platform, to ask a variety of questions related to national security. Respondents are internet users age 18 and older who answer “surveywall” questions on websites that use Google Opinion Rewards for Publishers to access content. Surveys appear on a network of more than 1,500 sites, including USA Today and the Financial Times. For more information on Google Surveys’ methodology, including questions regarding sampling bias and inferred demographics, please see Google’s white paper on the topic. Benjamin Wittes and Emma Kohse also discussed criticisms and advantages of the Google Surveys methodology at some length in this paper.