For the past several months, we have been quietly plotting to begin developing better systematic data on public opinion and national security policy. As one of us noted recently, there’s virtually no long-term temperature polling of public attitudes toward major national security policy areas. While many organizations, including one of ours, do run public surveys on national security matters, there’s no consistency on the questions asked, nor are they asked regularly.

Many national security public opinion questions are asked only annually, at best. For example, since 2004 Pew Research Center has repeatedly asked respondents a core security-vs.-freedom question: “What concerns you more about the government’s anti-terrorism policies?” But the question wasn’t asked 2011-2012, and it hasn’t been asked in 15 months.

A second problem with most national security polling is that it’s often event-driven and conducted only after, or during, national security crises. This can exaggerate the level of fear in the population, leading to extreme responses from policymakers. For example, after the horrific attack at the Pulse nightclub in Orlando last summer, CNN reported that 71 percent of respondents believed further attacks were very or somewhat likely in the future, the highest fear level since the U.S. invaded Iraq in 2003. Similarly, just after the terrorist attacks in San Bernardino and Paris in late 2015, Gallup found that 51 percent of Americans feared that they or a family member would be the victim of a terrorist attack. This was the highest level of fear seen since 2001, but it was also only the second time Gallup had asked the question since 2013.

While polls taken in the wake of terrorist attacks are widely reported, they likely misrepresent the typical level of fear among the American public. Relatedly, poll questions asked about national security annually that attempt to approximate a baseline may be skewed by events or media coverage that immediately precedes an event. Annual questions have limited utility to establish a baseline for measuring long-term trends.

We believe that providing more regular and predictable polling around important questions would fill an important void. It might even help give policymakers the information they need to resist the urge to overreact to dramatic polling numbers published during times of crisis. At a minimum, it would provide a better benchmark to understand just how much fear increases following an attack. And it would provide a useful body of data regarding what people value when it comes to national security policy.

Over the next few months, we plan to begin taking regular opinion surveys on basic matters related to national security. We are using Google Surveys, which allows us to run relatively large numbers of questions regularly.

The goal is to develop a dramatically better sense of public mood on the issues we write about on Lawfare. We are focused for now on basic pulse questions, asked consistently over time. We plan also, however, to ask news-driven questions as well.

We started with four questions, which we intend to run monthly:

Each question asked around 1,500 respondents to rate their confidence levels on a scale of one to five, with one being “no confidence” and five being “high confidence.” We intentionally asked the question in an impersonal fashion; when we asked about confidence in the presidency, for example, we did not ask about President Trump but about “the president.” This will allow the question not to change at the next change in administration.

These questions also serve to unpack what it means for the “government” to keep Americans safe. As Gallup has found since 2001 when it first asked “How much confidence do you have in the U.S. government to protect its citizens from future acts of terrorism?” a majority of Americans have confidence that their government can keep them safe. But, as our findings here show, this question masks widely varying levels of confidence Americans have in different facets of government in the enterprise of keeping them safe. Those distinctions are important for policymakers.

The results are in some respects unsurprising and in some respects striking. Congress rates poorly, with an average of rating of 2.4 on the scale of one to five. Fully 31 percent of respondents express “no confidence” in Congress on national security matters. Only 8 percent express “high confidence” in the legislature. And only 46 percent rate Congress as 3 or higher, meaning that a majority of 54 percent report having little or no confidence in the legislature on national security matters.

Low confidence in Trump likely reflects people’s reaction to the Russia stories and concerns about President Trump’s temperament, and we suspect the numbers would look quite different during more normal presidential times. Indeed, Gallup’s data show that presidential approval on foreign affairs has been lower than Trump’s current rating only after the rise of ISIS in 2014 and during the height of the Iraq war in 2006 and 2007.

In some respects, the big surprise is the relatively high confidence respondents express for the federal courts in the national security arena. The courts are often derided for getting in the way of the political branches on national security matters. But they averaged a rating of 2.9 on the one-to-five scale, higher than either the president or Congress. Only 20 percent of respondents expressed “no confidence” in the federal courts—which is 11 percent lower than Congress rated and 22 percent lower than the president. What’s more, the percentage of respondents expressing at least some confidence, that is the percentage that rated the courts at least a 3, is notably higher than with either of the political branches: 63 percent. Equally notably, this confidence is clustered right at 3 itself. In other words, in sharp contrast to the bifurcated response to the president, the curve for the courts looks a bit more like a bell. The broad plurality of respondents have some confidence—though not a whole lot—in the courts. 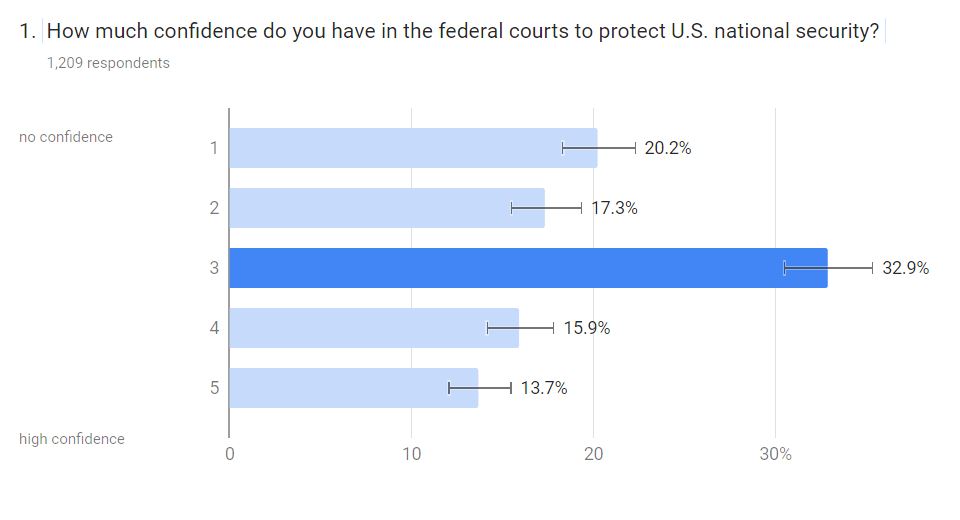 This is interesting since President Trump has been on a lengthy campaign against the “Deep State” and has criticized the intelligence community of late for all sorts of supposed errors and illegalities. We, of course, don’t know what these numbers would look like absent those attacks, but it’s notable that even with them, the percentage of Americans expressing at least some confidence in the intelligence community is 22 points higher than the percentage expressing at least some confidence in the president on national security matters.

One important note on the intelligence community question: This question is not designed to gauge whether respondents are comfortable with the intelligence community’s authorities or whether people think spy agencies have too much or too little power. We hope to address such matters with other questions down the road. For present purposes, we’re simply trying to measure how much confidence people have in different actors as agents of the protection of national security. In that sense, it is not surprising that people have more confidence in the national security agencies for that purpose than they do in other institutions.

Google Surveys uses inferred demographics, which allows for analysis of factors such as gender, age, region and even specific state that other polls would typically ask in a series of additional questions. Given the size of our sample we determined that the small number of respondents at the most granular levels of analysis that the instrument allows would yield margins of error too large to be useful.

But at a broader level, there were two binary inferred demographic cross-tabs that we found large enough to be used in further analysis: gender and age. For age, we split the sample at over and under 45 years. 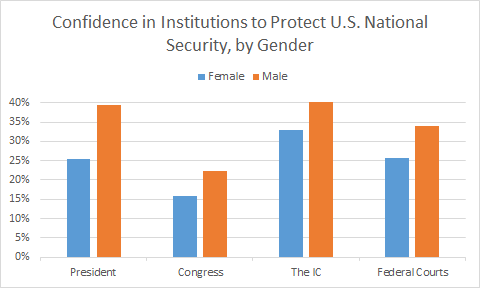 We see no significant differences between older and younger voters in their levels of confidence in the intelligence community and the courts, even though neither group showed a majority of confidence in either branch. Again, this is curious given other survey results showing a difference between older and younger voters lacking trust in the intelligence community. We will keep an eye on whether these disparities persist in future iterations of the question. 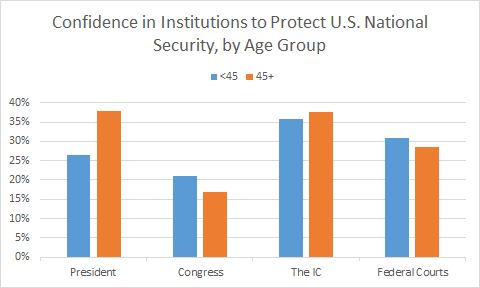 As we have limited data, we look forward to being able to measure longer-term trends. We will run these questions regularly in the months to come and, as budget permits, add more questions and, to the extent possible, provide greater analysis of the data that we get.

Dr. Ben Freeman is the author of The Foreign Policy Auction and Director of the Foreign Influence Transparency Initiative at the Center for International Policy. He previously served as Deputy Director of the National Security Program at Third Way.
More Articles
Published by the Lawfare Institute in Cooperation With