In the last week of May 2018, we used Google Surveys to ask respondents the following questions about confidence in institutions:

On a scale of 1 (“No confidence”) to 5 (“High confidence”), the average score for each institution from highest to lowest score was: 3.87 for the military, 3.10 for the intelligence community, 2.89 for federal courts, 2.77 for the president, and 2.55 for the Congress. In May, the military and the federal courts saw a small uptick in support from our previous polling in late April, while confidence fell slightly for the president and was largely unchanged for the intelligence community and Congress. 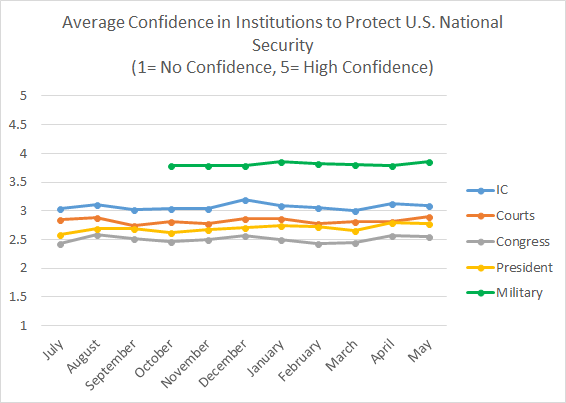 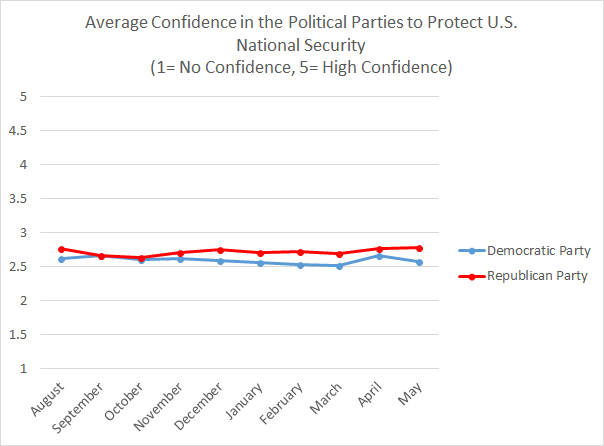 In our second question, we ask which of the parties will do a better job on protecting the country from international terrorism and military threats. On that question, the Republican advantage increases markedly when respondents are asked to choose between the parties or options of “neither” or “don’t know.” When asked in this manner, 33 percent of respondents chose the Republican Party, 22 percent chose the Democratic Party, 25 percent chose “don’t know,” and 21 percent chose “neither.” That a near majority of people don’t have a party preference indicates that, despite the Republican advantage, there are opportunities for the Democrats, even though the percentage of people opting against a political party has steadily matched those who choose the Democrats.

In late May we once again asked respondents, “How comfortable are you with the powers of the U.S. intelligence community? Do intelligence agencies in your view have not enough authority or do they have too much authority?” As in all previous months that we’ve asked this question, respondents lean towards the intelligence community having too much authority. However, also as in all previous months, far and away the most common response to this question is a neutral 3 on our scale, with 43 percent of respondents selecting this option. 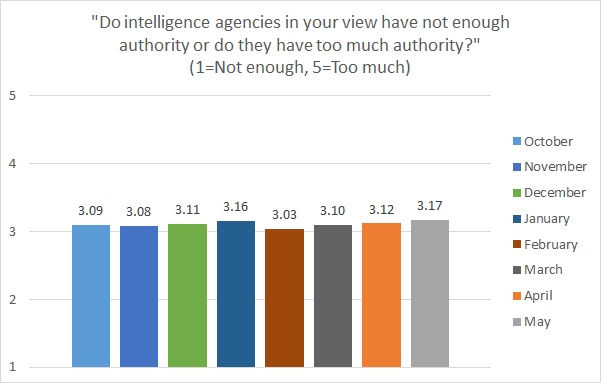 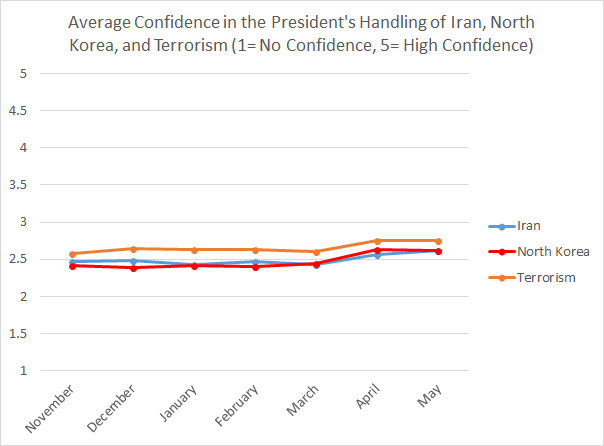 As we have since October, we once again asked the public about its level of confidence in Robert Mueller’s “fairness and objectivity” at the end of the month, specifically from May 25–27. Average confidence in Mueller was a 2.86 on our scale. This is a higher level of public confidence than the president, the Congress, the federal courts, or either political party receives and is virtually unchanged since our poll from late April. This result also follows the “indictment effect” pattern we’ve identified of public confidence in Mueller rising in the aftermath of his issuance of indictments and falling with time after indictments; it was conducted in late May, months after the most recent indictments from his investigation—and before this week’s additional charges against Paul Manafort and Konstantin Kilimnik. Note that unlike the trend lines for the broader institutional questions and the parties, confidence in Mueller fluctuates a fair bit and seems highly dependent on the news cycle. The more active the special counsel is in bringing cases and winning plea agreements, the stronger the support for him grows.

The ebbing of support for Mueller over the past few months could also have roots in the president’s attacks on the integrity of the investigation. Untangling that effect from the indictment effect will require seeing whether support for Mueller once again surges in response to his next round of activity—whenever that comes. 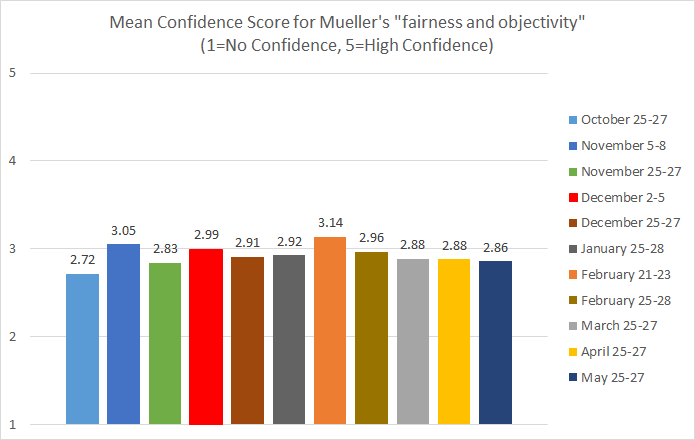 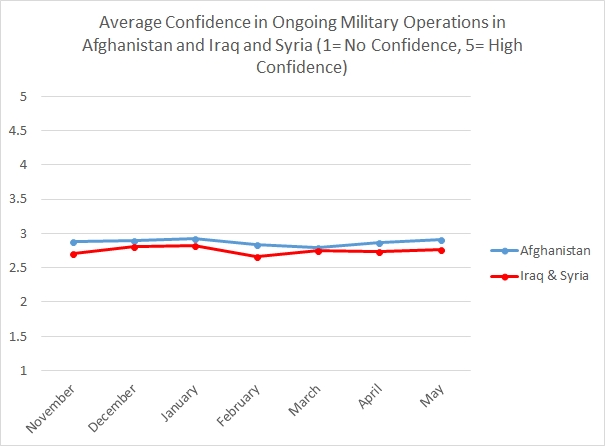 From May 25–28, we once again used Google Surveys, which is supporting this project with a large in-kind donation of access to its survey platform, to ask a variety of questions related to national security. Respondents are internet-users aged 18 and older who answer “surveywall” questions on websites that use Google Opinion Rewards for Publishers to access content. Surveys appear on a network of more than 1,500 sites, including USA Today and the Financial Times. For more information on Google Surveys’ methodology, including questions regarding sampling bias and inferred demographics, please see Google’s white paper on the topic. Benjamin Wittes and Emma Kohse also discussed criticisms and advantages of the Google Surveys methodology at some length in this paper.