A view of the Capitol Building from downtown Washington, D.C. (Source: Ed Schipul, CC BY 3.0)

In July 2017, we began a polling project to measure public confidence in government institutions on national security matters on an ongoing basis. This post provides our data for the month of June 2019. It includes public perceptions of government institutions and of the two major political parties’ handling of national security; the public’s comfort with intelligence authorities; and public perceptions about the president’s handling of key national security issues, Special Counsel Robert Mueller’s investigation, and ongoing military operations.

Confidence in Institutions to Protect U.S. National Security Was Down in June

From June 25 to June 27, we used Google Surveys to ask respondents the following questions about confidence in institutions:

Since May, confidence in government institutions to protect U.S. national security edged downward across the board; it dropped moderately for the president and intelligence community, while it fell minimally for Congress, the federal courts, and the military. On a scale of 1 (“no confidence”) to 5 (“high confidence”), the average score for each institution, from highest to lowest, was 3.86 for the military, 3.11 for the intelligence community, 2.79 for the courts, 2.77 for the president, and 2.44 for Congress. 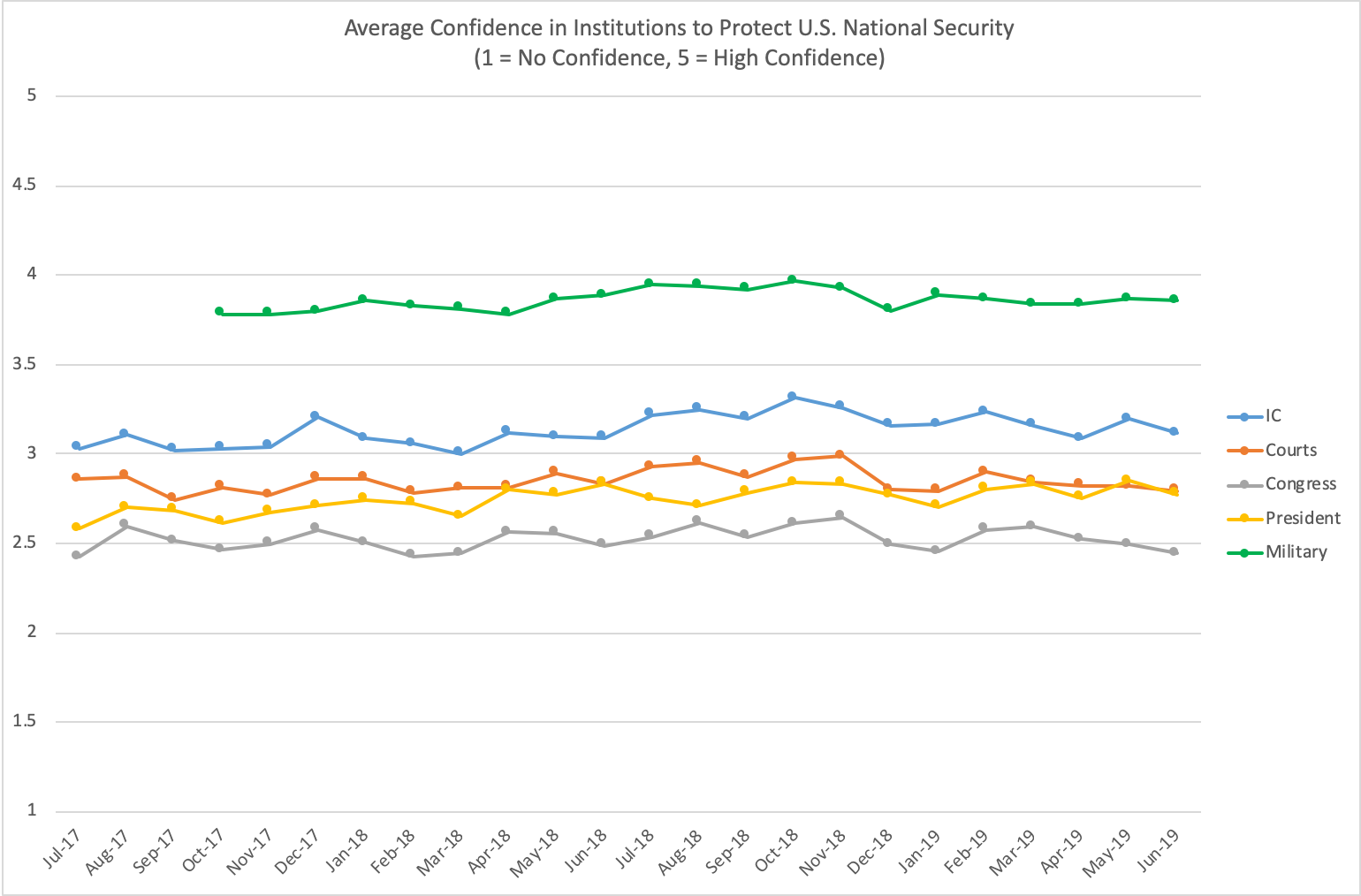 Average confidence in the president on national security decreased from 2.85 in our May polling to 2.77 in June. This period coincided with ongoing tensions with Iran and uncertainty about U.S.-China trade relations. The June survey was in the field immediately before the G-20 Osaka summit and the president’s highly covered meeting with North Korean leader Kim Jong Un at the Korean Demilitarized Zone.

In June, average confidence in the Republican Party was 2.78 on our scale, which was little changed from polling in May. Average confidence in the Democratic Party ticked up to 2.65 in June, which moderately narrowed Democrats’ disadvantage on national security. While confidence in the Democratic Party remains above that of Congress as a whole (2.44), Democrats persistently lag behind Republicans in the eyes of the American public when it comes to protecting the country. This is consistent with past polling conducted by Third Way and others that identified this trust gap in national security. 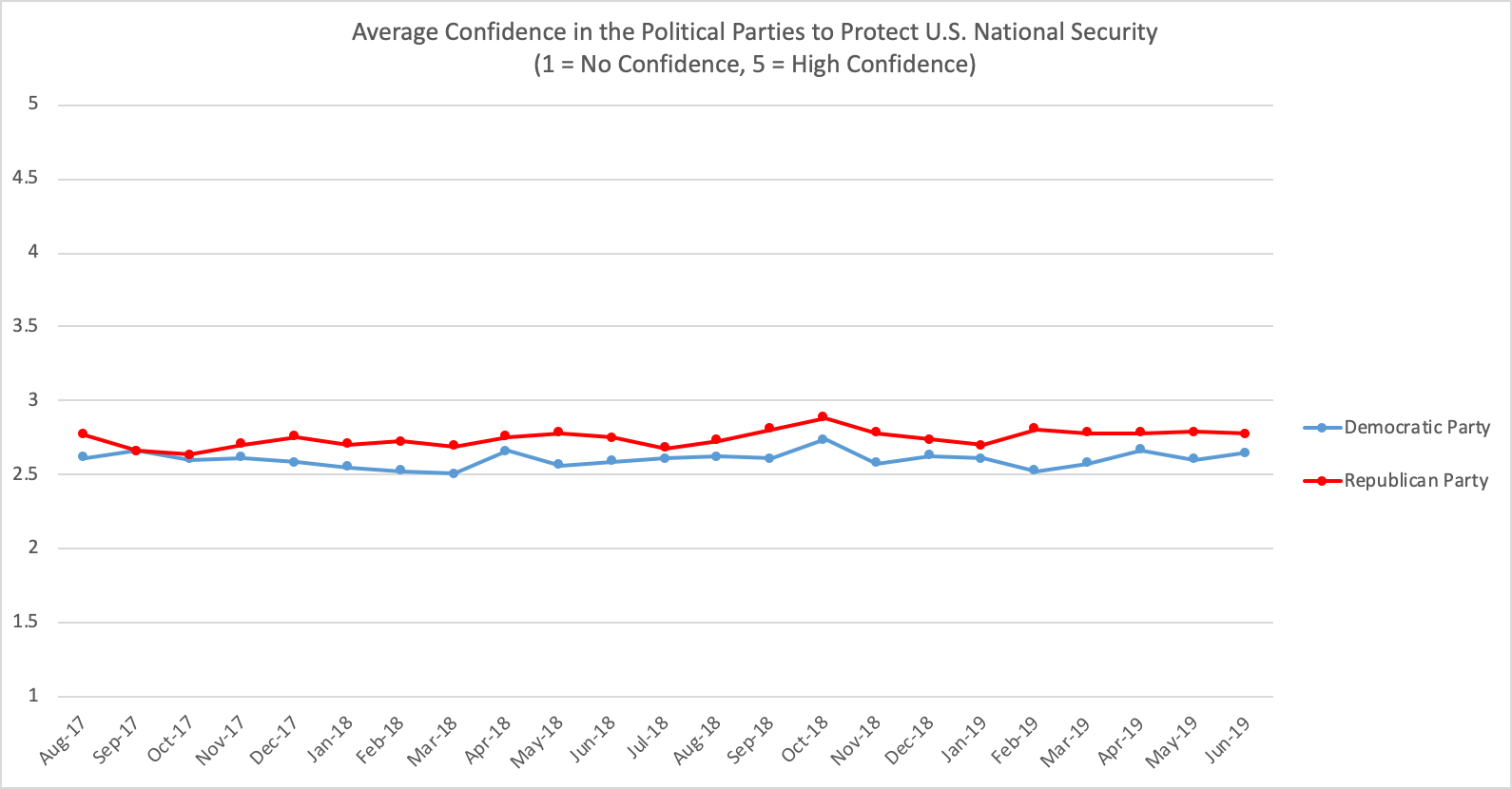 Republicans’ advantage for our second question on partisanship and national security—“Which of the parties will do a better job protecting the country from international terrorism and military threats?”—ticked down slightly to six points this month. On this question, respondents are asked to choose between the parties or options of “neither” or “don’t know.” When asked in this manner, 31 percent of respondents chose the Republican Party, while 25 percent chose the Democratic Party; 25 percent chose “don’t know,” and 20 percent chose “neither.” Republicans maintain an advantage on this question, but this is the narrowest gap between the parties since December 2017.

In late June we once again asked respondents, “How comfortable are you with the powers of the U.S. intelligence community? Do intelligence agencies in your view have not enough authority or do they have too much authority?” The average response in June was a 3.11 on our scale. However, this month, as in all previous months, far and away the most common response to this question (40 percent) was a neutral 3 on our scale. And 71 percent of respondents chose one of the middle three options, not either 1 or 5. These numbers have been relatively stable in the period in which we have asked this question, ranging from a low of 3.00 to a high of 3.18 seemingly randomly. During this period, the country has not experienced notable intelligence failures, terrorist attacks or major intelligence scandals, despite a brief debate over the role of the National Security Agency in losing cybertools that may have contributed to recent ransomware attacks. These disputes, however, seem to receive little public notice. As such, the stability of these numbers during such a period offers a good baseline against which to measure any changes if and when the political process lurches toward considering either expanding or contracting intelligence authorities. 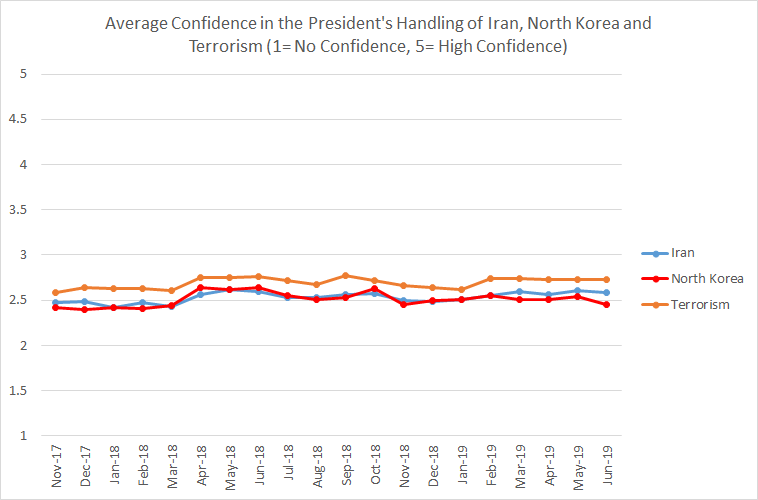 Now that Mueller is scheduled to testify publicly, we will again test confidence levels before and after his July 17 testimony.

While the military enjoys the highest level of public confidence of any government institution we ask about (a 3.86 on our scale), confidence in ongoing military operations in Afghanistan and Iraq and Syria is markedly lower, with average confidence scores of 2.83 and 2.72, respectively. Both of these confidence numbers are well within the range of what we’ve observed throughout this polling project.

Our consistent findings of middling public confidence in these conflicts corresponds with a recent poll from the Charles Koch Institute and Real Clear Politics, as well as a recent Eurasia Group Foundation poll, which found that Americans generally prefer to avoid military interventions. 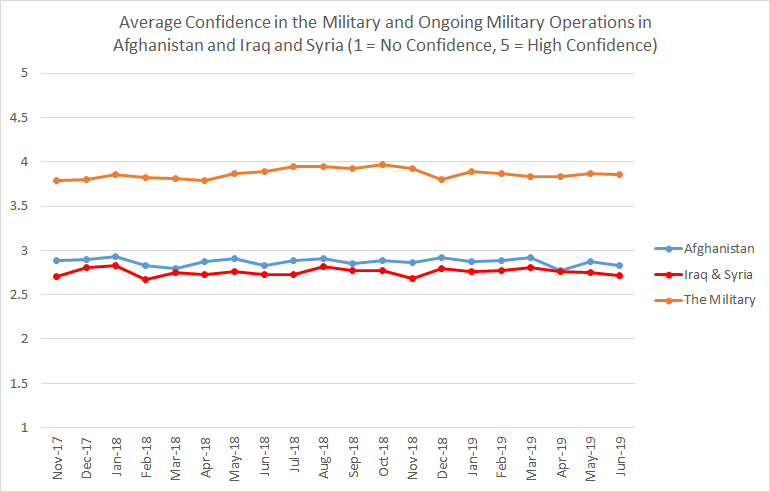 From June 25 to June 27, we once again used Google Surveys, which is supporting this project with a large in-kind donation of access to its survey platform, to ask a variety of questions related to national security. Respondents are internet users age 18 and older who answer “surveywall” questions on websites that use Google Opinion Rewards for Publishers to access content. Surveys appear on a network of more than 1,500 sites, including USA Today and the Financial Times. For more information on Google Surveys’ methodology, including questions regarding sampling bias and inferred demographics, please see Google’s white paper on the topic. A follow-up paper from Katrina Sostek showed Google Surveys’ accuracy versus benchmark questions to be comparable to other online survey platforms, with some differences noted based on weighting schemes. Benjamin Wittes and Emma Kohse also discussed criticisms and advantages of the Google Surveys methodology at some length in this paper.