In the last week of July, we used Google Surveys to ask respondents the following questions about confidence in institutions:

In July, public confidence in the president on national security matters dropped. This stands in stark contrast to every other institution, about which confidence increased since our previous month’s polling in late June. On a scale of 1 (“No confidence”) to 5 (“High confidence”), the average score for each institution from highest to lowest score was: 3.94 for the military, 3.22 for the intelligence community, 2.93 for federal courts, 2.75 for the president and 2.54 for Congress.

Confidence in President Trump on national security fell to 2.75 in July from 2.83 after his June summit with North Korean leader Kim Jong-un. This drop in public opinion may reflect criticism the president received from across the entire political spectrum for his performance at his summit in Helsinki with Russian President Vladimir Putin and the conflict with NATO allies that preceded his meeting with Putin. Confidence in the president dropped by a comparable amount among men and women, but among people under 35 years old, it dropped from 2.68 to 2.55 while there was no change with people over 55. This runs contrary to the idea that older Americans, who experienced the Cold War firsthand, would be more critical of the president’s obsequiousness toward Putin. Note that the presidential confidence average is still considerably above its low point in our polling—it has been generally on the rise over the past year. The July dip largely wiped away the previous month’s gain. 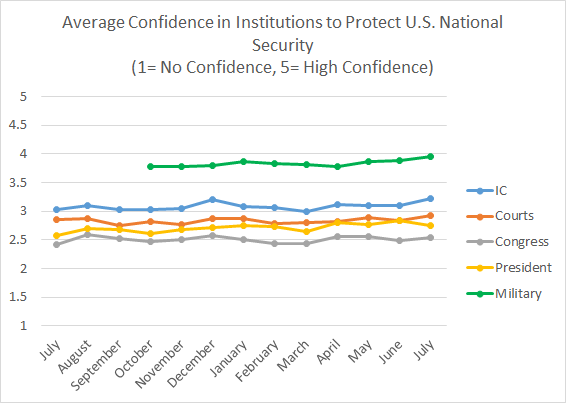 Are Democrats Closing the Security Gap?

We ask two separate questions to gauge the public’s party preferences on national security. And the results are not wholly consistent.

We pay particular attention to this statistic and a similar tracking question asked by Gallup every September. In Third Way research, we have seen that when the gap is narrower Democrats tend to fare better in elections, as this security gap is often a leading indicator of overall party favorability. 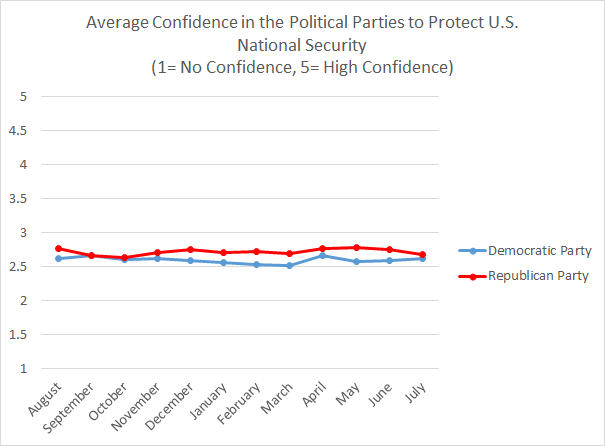 If the results of the first question look promising for Democrats, the results of our second question—Which of the parties will do a better job protecting the country from international terrorism and military threats?—should encourage Republicans. On that question, the Republican advantage increases when respondents are asked to choose between the parties or options of “neither” or “don’t know.” When asked in this manner, 31 percent of respondents chose the Republican Party, while only 24 percent chose the Democratic Party; 24 percent chose “don’t know,” and 21 percent chose “neither.”

This seven-point gap between the parties in July is smaller than the 14-point gap from June, but the June figure was also a larger divide between the parties than at any time since we’ve asked this question. In other words, the security gap may be closing, but depending on how one frames the question, it still shows up as a substantial advantage for Republicans.

In late July we once again asked respondents, “How comfortable are you with the powers of the U.S. intelligence community? Do intelligence agencies in your view have not enough authority or do they have too much authority?” There was a slight drop in the average response in July. As in all previous months that we’ve asked this question, respondents lean slightly toward the intelligence community having too much authority. However, also as in all previous months, by far and away the most common response to this question is a neutral 3 on our scale, with 45 percent of respondents selecting this option. 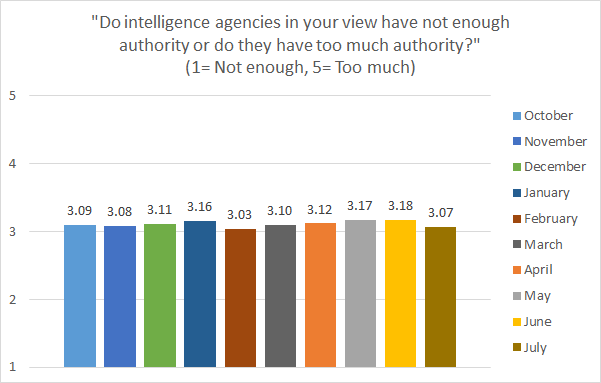 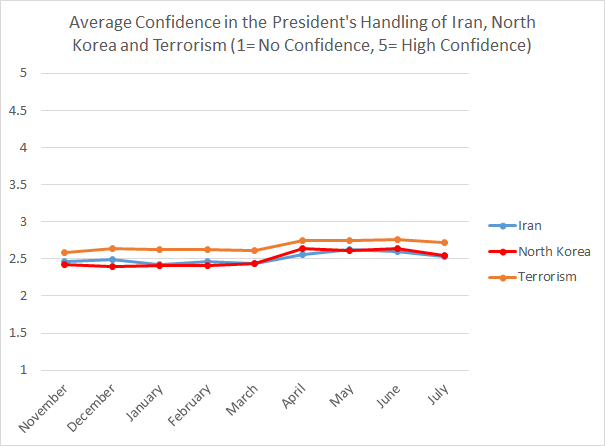 As we have since October, we once again asked the public about its confidence in Robert Mueller’s “fairness and objectivity” at the end of July, and it was a 2.90 on our scale. This is an increase from June, which marked the first time since we began asking this question that the public did not hold higher confidence in Mueller than in the president.

Confidence in the Mueller investigation tends to spike when the special counsel indicts people or reaches plea agreements, and the Department of Justice had announced indictments against 12 Russian intelligence officers just before the period in which the poll was fielded. This may have helped to increase public confidence in Mueller. The first trial to result from the special counsel’s investigation, the prosecution of former Trump campaign chairman Paul Manafort, is underway, and the outcome may further impact confidence in the Mueller investigation. These results may show up in our August polling. 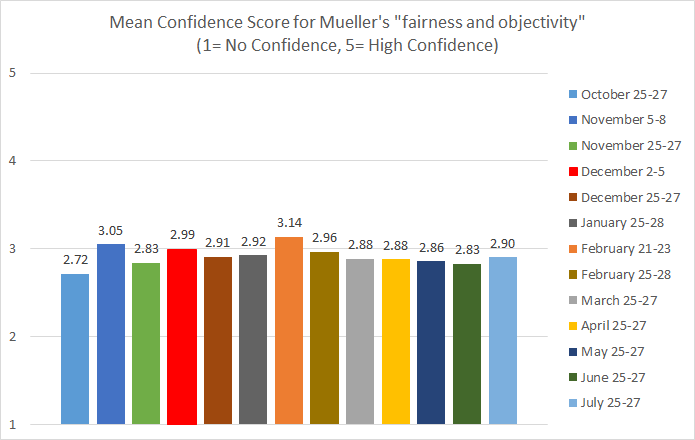 From July 25-27, we once again used Google Surveys, which is supporting this project with a large in-kind donation of access to its survey platform, to ask a variety of questions related to national security. Respondents are internet users age 18 and older who answer “surveywall” questions on websites that use Google Opinion Rewards for Publishers to access content. Surveys appear on a network of more than 1,500 sites, including USA Today and the Financial Times. For more information on Google Surveys’ methodology, including questions regarding sampling bias and inferred demographics, please see Google’s white paper on the topic. Benjamin Wittes and Emma Kohse also discussed criticisms and advantages of the Google Surveys methodology at some length in this paper