In the last week of January 2018, we used Google Surveys to ask respondents the following questions about confidence in institutions: 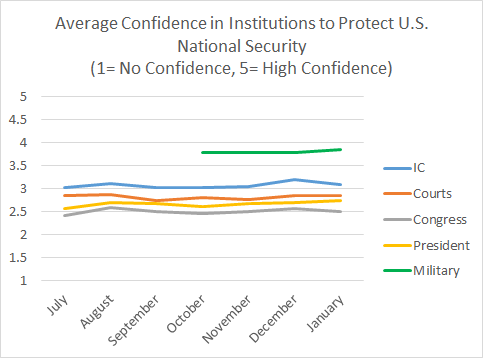 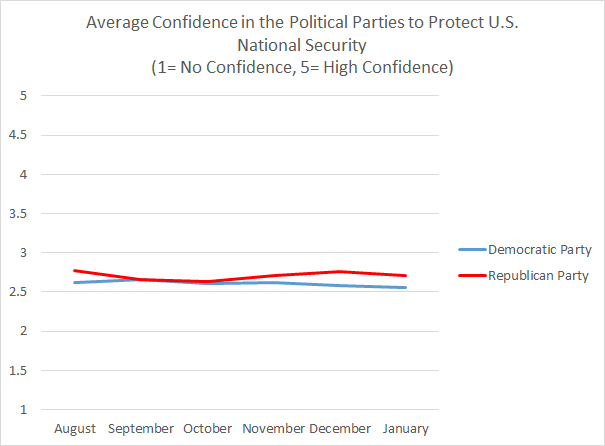 Republicans hold an advantage over Democrats on national security when respondents are asked about their confidence in each party separately, and the Republican advantage increases markedly when respondents are asked to choose between the parties or options of “neither” or “don’t know.” When asked in this manner, 34.9 percent of respondents chose the Republican Party, and 21.5 percent chose the Democratic Party. While the number of respondents selecting the Democratic Party remained unchanged since we asked this question in December, this is a nearly five-point gain for Republicans in just one month. Moreover, slightly more respondents chose “neither” (21.8 percent) or “don’t know” (21.7 percent) than chose the Democratic Party as doing a better job of protecting the country from international terrorism and military threats. Both “neither” and “don’t know” responses were much lower than in previous months, possibly indicating a shift to the Republican Party by previously undecided or ambivalent sections of the population. 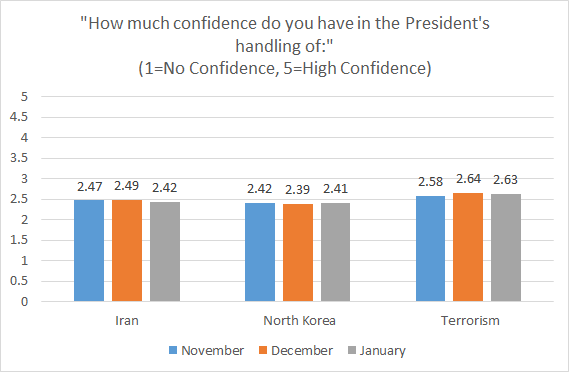 Support for Special Counsel Robert Mueller tends to rise and fall with indictments emanating from his team. We first observed this pattern of increased support for Mueller in November, in polling before and after the Paul Manafort and Rick Gates indictments were made public. In late November and early December, we saw this pattern again in polls we conducted before and after the plea agreement with former national security adviser Michael Flynn was announced. 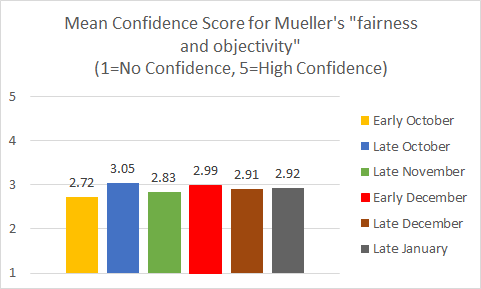 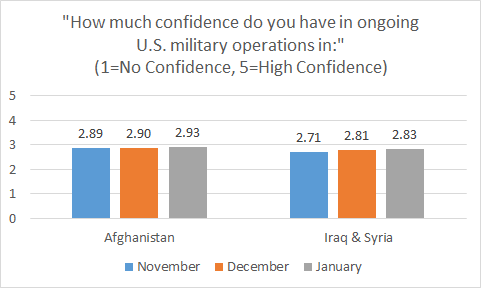 From Jan. 25-28, we once again used Google Surveys, which is supporting this project with a large in-kind donation of access to its survey platform, to ask a variety of questions related to national security. Respondents are internet users 18 and older who answer “surveywall” questions on websites that use Google Opinion Rewards for Publishers to access content. Surveys appear on a network of more than 1,500 sites, including USA Today and the Financial Times. For more information on Google Surveys’ methodology, including questions regarding sampling bias and inferred demographics, please see Google’s white paper on the topic. Benjamin Wittes and Emma Kohse also discussed criticisms and advantages of the Google Surveys methodology at some length in this paper.